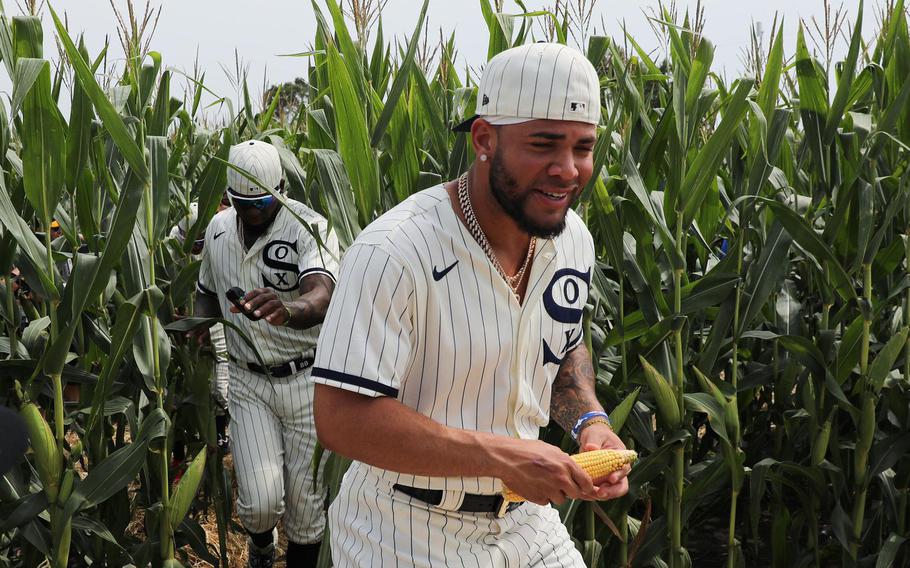 Chicago White Sox third baseman Yoan Moncada, right, holds an ear of corn in his hands as he and teammates walk through the cornfields before the Field of Dreams game against the Yankees on Thursday, Aug. 12, 2021, in Dyersville, Iowa. The game was played on the same farm as the Academy Award-nominated movie "Field of Dreams" was filmed. (Jose M. Osorio/Chicago Tribune/TNS)

On Thursday night, the New York Yankees and Chicago White Sox played a game that rivaled Hollywood fairy tales. It was the first official MLB game played in Iowa, in a ballpark built among the Dyersville’s corn fields where the iconic 1989 movie “Field of Dreams” was shot.

The game, with its Hollywood ending and its setting within America’s heartland, was the most-watched regular season MLB game in 16 years, with 5.9 million viewers across FOX and FOX Deportes. It was also the most streamed regular season baseball game in FOX Sports history. Chicago and New York ranked as the top two markets.

Kevin Costner and the two teams emerged from the corn stalks in the outfield before the lineups were announced. The score was kept on a board built with wood planks. And in the bottom of the ninth, with a runner on first, Chicago’s Tim Anderson crushed a pitch and the baseball disappeared within the sea of green stalks that embraced the outfield wall to give the White Sox a 9-8 walk-off win.

The game was originally planned to be played last year, however the COVID-19 pandemic interrupted the league’s plans. That originally-planned game also included the Yankees and White Sox, but due to 2020’s pod scheduling the Yankees were replaced by the St. Louis Cardinals. But the game was ultimately scrapped and moved to this year, with the Yankees picked to play the White Sox once again.

Before the pitches were thrown and runs were scored, MLB Commissioner Rob Manfred confirmed that the league will return to play another game in Dyersville.