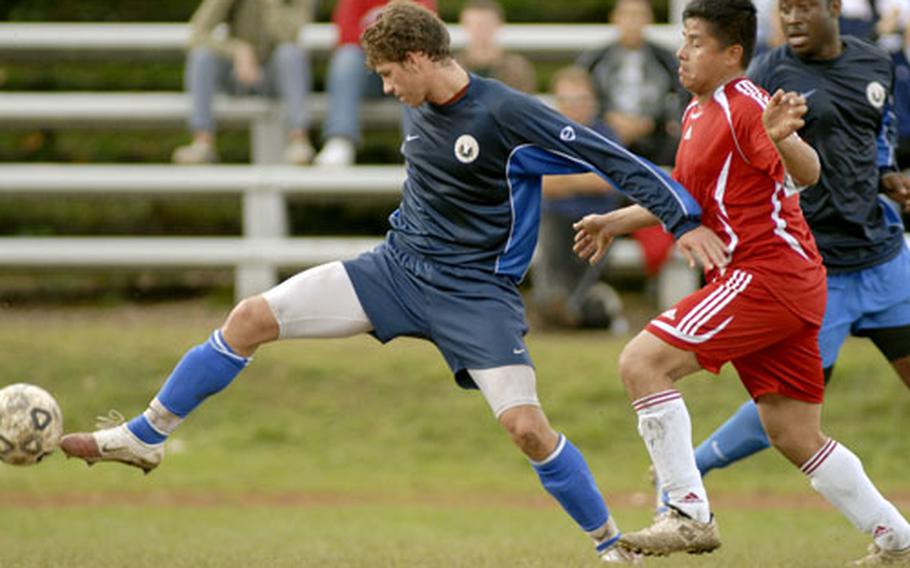 Bryan Liston from Lakenheath finesses the ball around Juan Martinez of Spangdahlem during the first half of the USAFE Men’s Championship soccer tournament held Friday at Sembach, Germany. Lakenheath shut out Spangdahlem 1-0 in the final. (Ben Bloker / S&S)

Bryan Liston from Lakenheath finesses the ball around Juan Martinez of Spangdahlem during the first half of the USAFE Men’s Championship soccer tournament held Friday at Sembach, Germany. Lakenheath shut out Spangdahlem 1-0 in the final. (Ben Bloker / S&S) 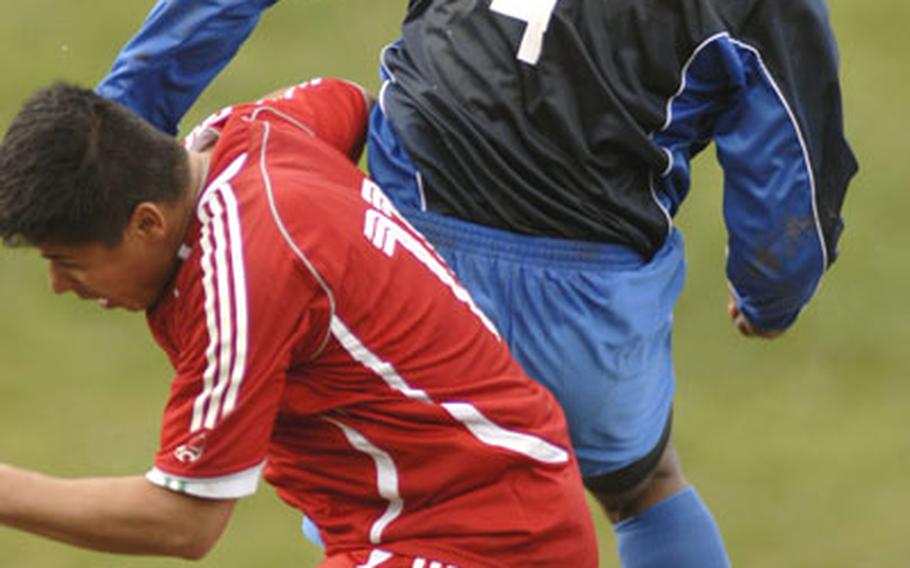 Neville Allen from Lakenheath heads the ball over Juan Martinez of Spangdahlem during the first half of the USAFE men’s championship game. (Ben Bloker / S&S) 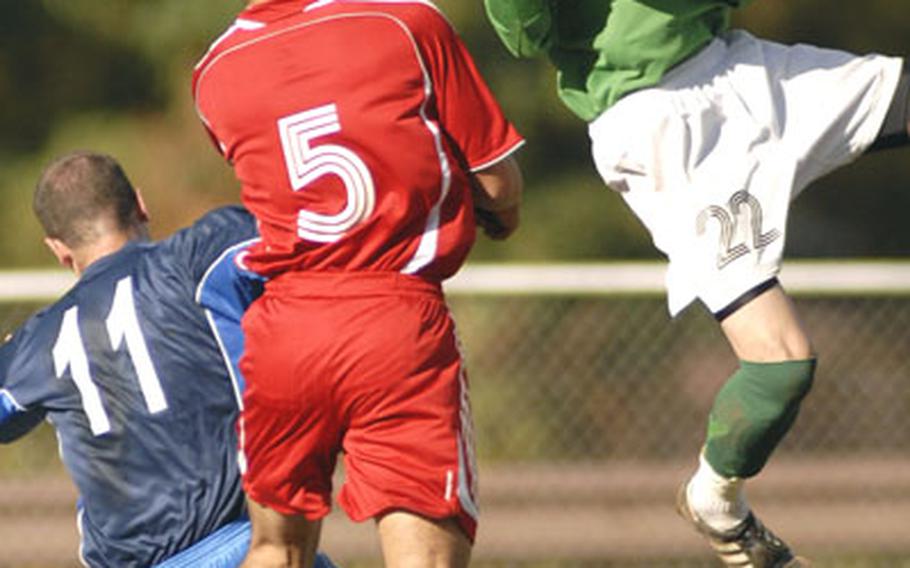 J.T. Sullivan from Spangdahlem makes a huge save over John Maynard, left, of Lakenheath during the first half. (Ben Bloker / S&S) 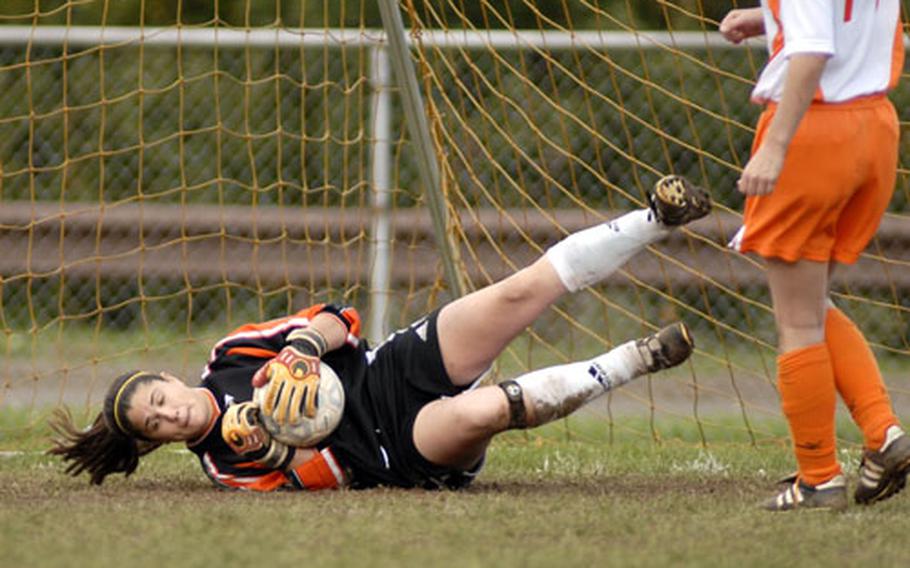 Dana Fernkas of Spangdahlem makes a save during the first half of the USAFE women&#39;s championship game at Sembach. Spangdahlem won 3-1. (Ben Bloker / S&S) 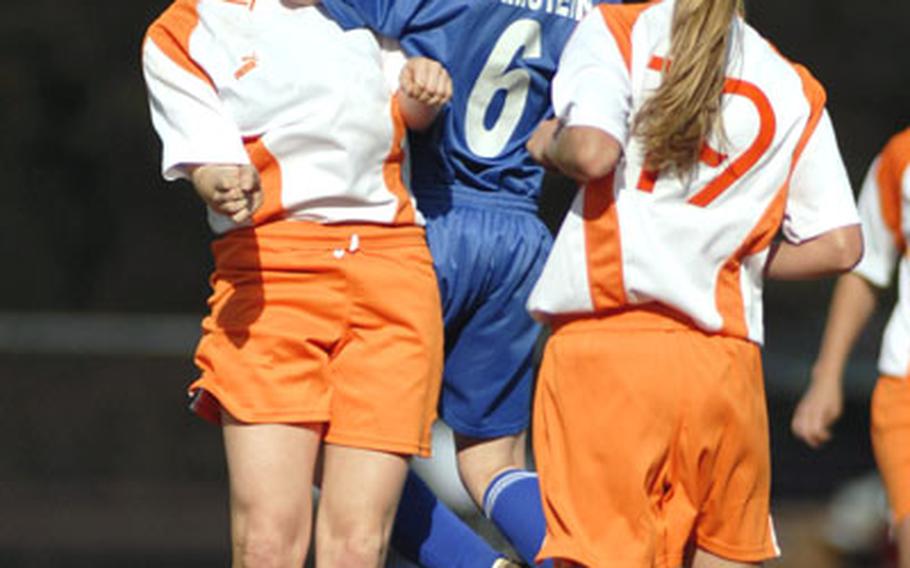 Sarah Reeve of Spangdahlem heads the ball over McKayla Clark of Ramstein during the first half. (Ben Bloker / S&S)

SEMBACH AIR BASE, Germany &#8212; Spangdahlem&#8217;s women and Lakenheath&#8217;s men ended three-year reigns by their opponents Friday in the championship games of the five-day, 2006 USAFE soccer championships.

Lakenheath men 1, Spangdahlem 0: The Eagles completed a worst-to-first run with their sixth shutout in seven games during the round-robin tournament.

&#8220;We wanted to keep a clean sheet,&#8221; said sweeper Jacob Kingston after keeper Chris Phillips posted his fourth shutout in four tries. &#8220;The only goal scored against us was a penalty kick.&#8221;

That came on Wednesday in a 2-1 victory over Spangdahlem. The Eagles outscored the opposition 21-1 during the tournament.

Things weren&#8217;t really that monotonous for Phillips, who battled all-out pressure by Spangdahlem over the final 45 minutes.

&#8220;Our outside defenders (Brian Ackerman and Roy Bowden) played great,&#8221; said Kingston, voted to the all-star team in his first season with Lakenheath. &#8220;Those two big guys in the middle (all-stars Neville Allen and Melvin Harper) did all the work. All I did was clean up.&#8221;

Don&#8217;t believe it, said Bowden, a 46-year-old chief master sergeant coaxed out of retirement for this tournament.

Especially when a three-year dynasty&#8217;s on the line.

Philips had to push a rocket by Spang&#8217;s Emerson Bellamy over the bar just five minutes into the second half, and the Sabers mounted a dozen dangerous forays thereafter.

Her first goal came 13 minutes into the game. The second came in the 51st minute and put Spang up 2-0.

Ramstein cut its deficit to 2-1 three minutes later, when all-Air Force midfielder Amber Reynolds directed a pass from Mariah Dockter inside the right post, but that was all the Spang defense and keeper Dana Ferkas were prepared to permit.