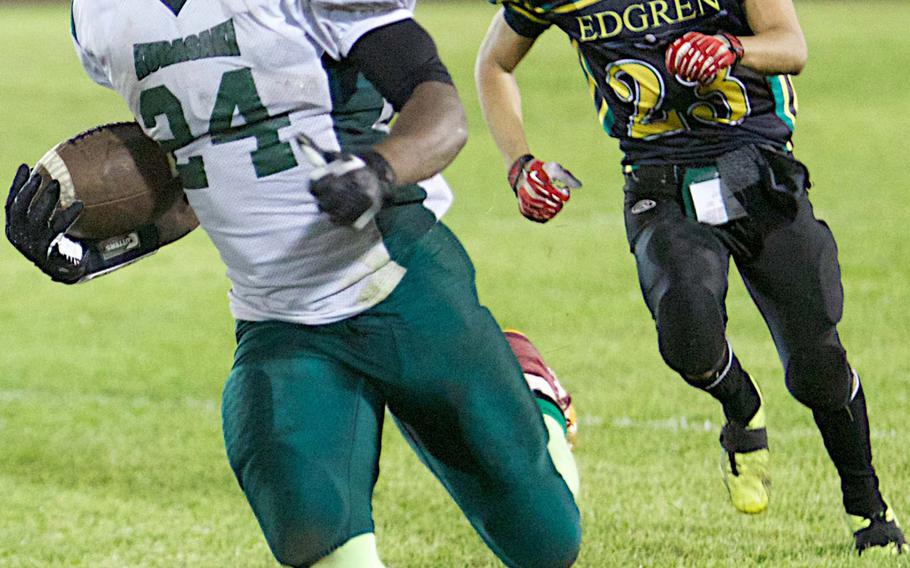 Buy Photo
Kubasaki running back Jarrett Mitchell could have spent his senior year in the States with relatives but chose to return to Okinawa, in part to chase that elusive Far East Division I title, which the Dragons missed the last two years. But if the budget standoff in Washington continues, there may not be a D-I game played this season. (Sheila Suckart/Special to Stars and Stripes)

Buy Photo
Kubasaki running back Jarrett Mitchell could have spent his senior year in the States with relatives but chose to return to Okinawa, in part to chase that elusive Far East Division I title, which the Dragons missed the last two years. But if the budget standoff in Washington continues, there may not be a D-I game played this season. (Sheila Suckart/Special to Stars and Stripes) Buy Photo
Kadena senior Andrew Kilkenny, the reigning Far East boys cross country champion, feels a cancellation of this year's meet would not affect just the runners, but parents, coaches and anybody in the community with anything invested in their teams. (Dave Ornauer/Stars and Stripes and Stripes) 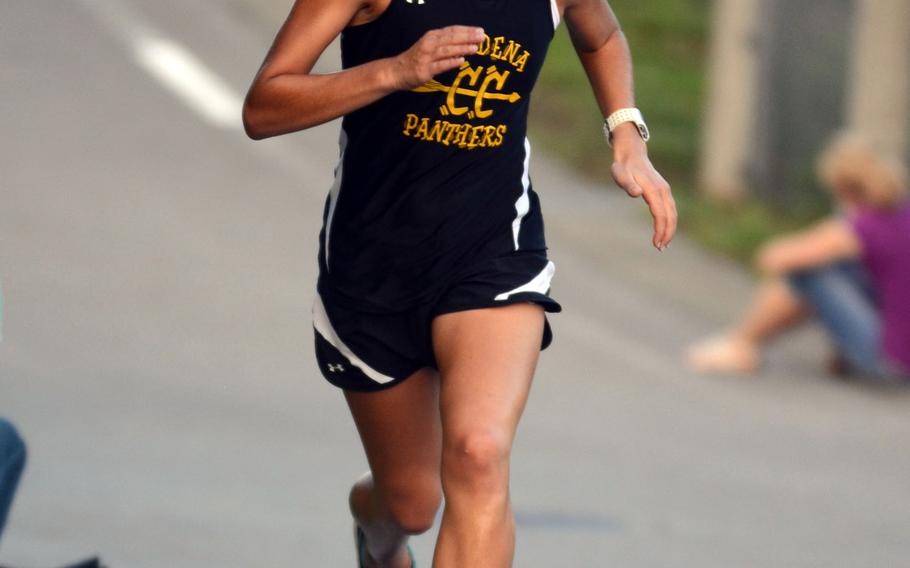 TORII STATION, Okinawa – Jarrett Mitchell could have spent his senior school year with relatives in South Carolina or Georgia, closer to the various football camps, All-Star games and college football scouts that have been a part of his life throughout high school.

Instead, he chose to return to Kubasaki for various reasons, among them chasing the Far East Division I football title that’s eluded the Dragons two straight years, and to prove it is possible to get noticed by colleges even if you live and play overseas.

Asked why he chose Kubasaki over the States, Mitchell said: “I had friends and relationships I didn’t want to leave, and I also wanted to aim for the championship, in which we came up short twice.

“But more than those things, I wanted to start something new out here, to show that you don’t have to be in the States to be seen by (college) coaches. ... No matter where you are, if you work hard, it will happen. It takes extra work, but it’s not a bad thing to work hard. And I wanted to finish what I started.”

Given the developments of the last two weeks in Washington, Mitchell might be forgiven if he’s had second thoughts.

For if the government shutdown continues past the deadline for ticketing football players for inter-district travel, that game and perhaps all Far East fall sports events could come off the books.

“We have to keep pushing forward and hope we have that championship,” Mitchell said of the D-I title game, scheduled for Nov. 9.

“We would still work hard, we would still compete. We’d be disappointed (if it was canceled), but it won’t affect our work ethic. We’ll still work have and make do with what we have, even if it’s just playing Kadena three times.”

Whether Mitchell will get that showcase and third chance at a Far East title is up in the air. What’s certain, DODDS officials say, is uncertainty. No Fiscal Year 2014 budget exists for DOD; thus, DODDS-Pacific hasn’t the authorization to buy airline tickets for inter-district travel.

Mitchell may not need the exposure that an appearance in a title game might give him. Thanks to the camps he’s attended, he’s well known in recruting circles. But the same probably can’t be said about dozens of athletes throughout the Pacific.

Kadena’s coaching staff is looking at colleges where Andrew Kilkenny and Ana Hernandez might continue their running careers. One Panthers assistant feels that if Far East was canceled, it might affect their chances at running at a higher level.

A cancellation would be “devastating,” said Hernandez, reigning Far East girls cross-country champion. “All the work we put into the season for nothing,” she said.

“It’s not only the runners, but the coaches, the community, the parents, all the work they put into it,” added Kilkenny, boys reigning champion and Hernandez’s teammate. “They’d want an end to the season, they’d like to see resolution.”

Regular-season travel is done mostly by bus, and Hoff said most of those contracts were paid for by Fiscal Year 2013 funds, so regular-season play should continue.

Ticket requests and eligibility checks for athletes set to play in Far Easts are being done this week, said tournament organizers, who are pressing ahead as though Far Easts will take place. Some have already ordered and paid for programs and awards with tournament entry fees.

“We don’t have all the rules of the road yet,” Hoff said. “We want to do right by kids, but we have to follow the law and these determinations have to be made. We’re in uncharted waters. This situation is unprecedented, complex and changing.”

No Far East athletics events have been canceled since the 1980-81 school year, when all tournaments except volleyball were axed due to deep defense spending cuts in the Carter administration’s last year.

Coaches are doing their best to keep their athletes’ minds on the task at hand, including Luke Spencer, whose Daegu Warriors would host the D-II football title game on Nov. 8.

He says he tries to “insulate the kids as best as I can from the uncertainty. All we can do is practice and be ready to play. If they say yes, we can play, great.”

But his heart would go out to all athletes in all sports, particularly those like Mitchell who are in their final year of school.

“Seniors, you want them to go out in a manner befitting their careers,” Spencer said. Following Saturday’s game at Kadena, Spencer said he wouldn’t want to tell his players, “There it is, that was your last game, you’re done.”