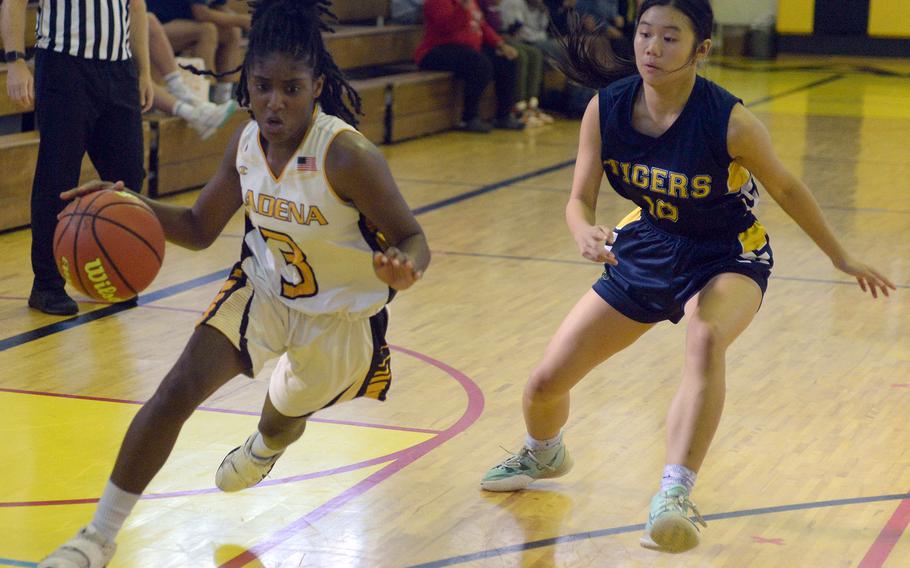 KADENA AIR BASE, Okinawa – After two years of gathering dust on the shelf thanks to the coronavirus pandemic, inter-district basketball resurfaced on Okinawa this weekend.

Kadena and Kubasaki, DODEA-Okinawa’s two high schools, played host Friday and Saturday to Taipei American of Taiwan and American School In Japan of Tokyo in a 10-game weekend exchange that coaches and players called a win-win for everyone involved.

“It kind of showed us what other teams look like,” Kadena sophomore guard NyKale Penn said after the Panthers rallied past the Tigers 42-37 in Saturday’s contest at the Panther Pit.

Kadena trailed 27-22 early in the second half, then used a 17-5 run to pull ahead for good and held on at the end against a Tigers squad cheered on by parents who made the nearly 400-mile journey to Okinawa.

“It was a good learning experience, so we can move forward,” Penn said.

While the Panthers girls remained unbeaten after four games, Kubasaki’s girls broke into the win column after opening with three losses. Sophia Grubbs scored 10 points to lift the Dragons past the Mustangs 36-25.

Some players said they entered the weekend with one eye on what’s to come next month – the ASIJ Kanto Classic Jan. 19-21 in Tokyo and the first Far East Division I tournament since the 2020 one got canceled on its first day.

“It’s really fun,” Dragons sophomore guard Jacquline Mitchell said. “I’m glad to have this opportunity to prepare for the ASIJ Tournament and the Far East.”

Getting a chance to play against off-island opponents that they rarely see was a blessing, coaches and players said.

“It’s great to have these teams from off island come here and see the style of ball we would typically see at Far East,” Kubasaki boys coach Jon Fick said. “We feel very fortunate that these teams are willing to travel here and we get the chance to play two other schools.”

Kadena’s and Kubasaki’s 2020-21 season was canceled entirely due to the COVID pandemic, and they played each other three times last December before a COVID spike forced the DODEA-Okinawa district to shut down the rest of the 2021-22 season. 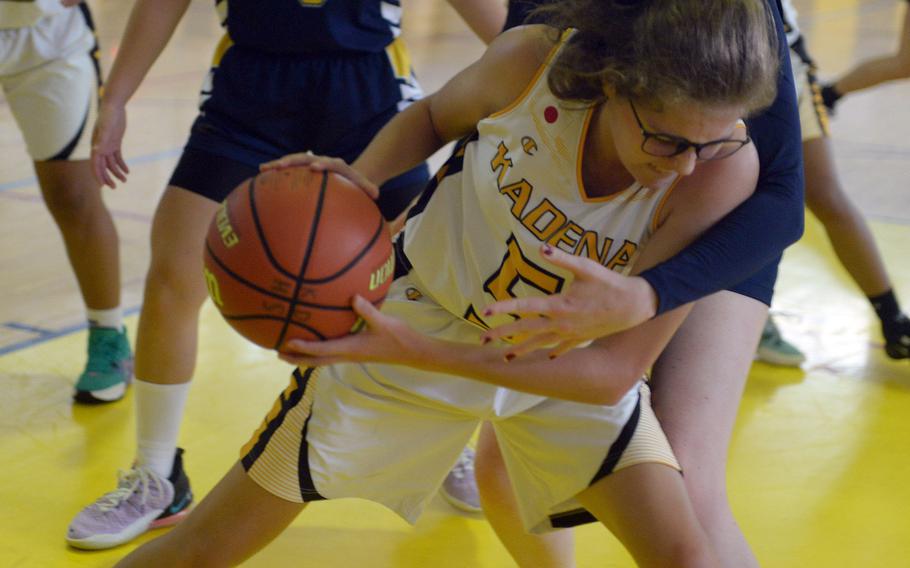 Kadena junior Marina Sawyer finds herself bottled up by Taipei American's defense during Saturday's 42-37 win by the Panthers. (Dave Ornauer/Stars and Stripes) 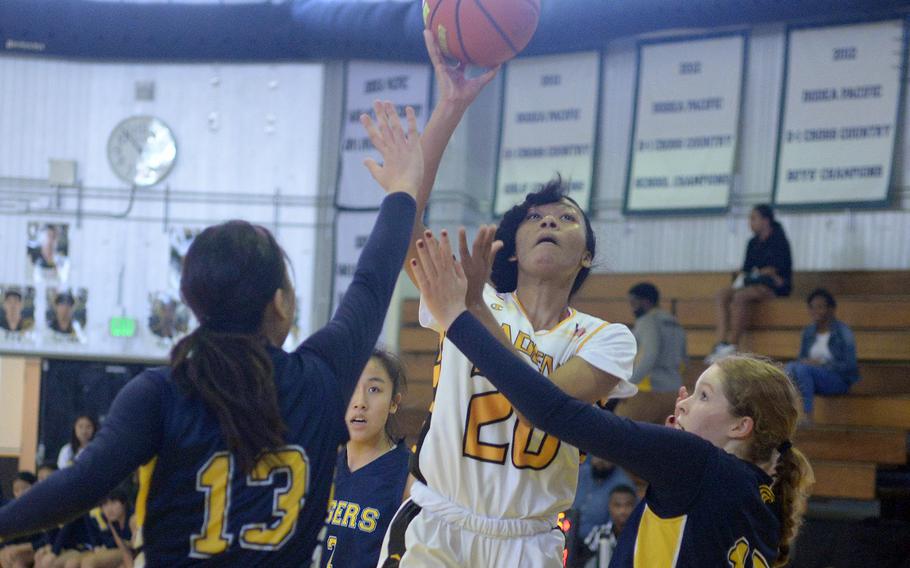 Kadena's Ayanna Levi had 14 points as the Panthers rallied from five points down in the fourth quarter to win Saturday over Taipei American 42-37. (Dave Ornauer/Stars and Stripes) 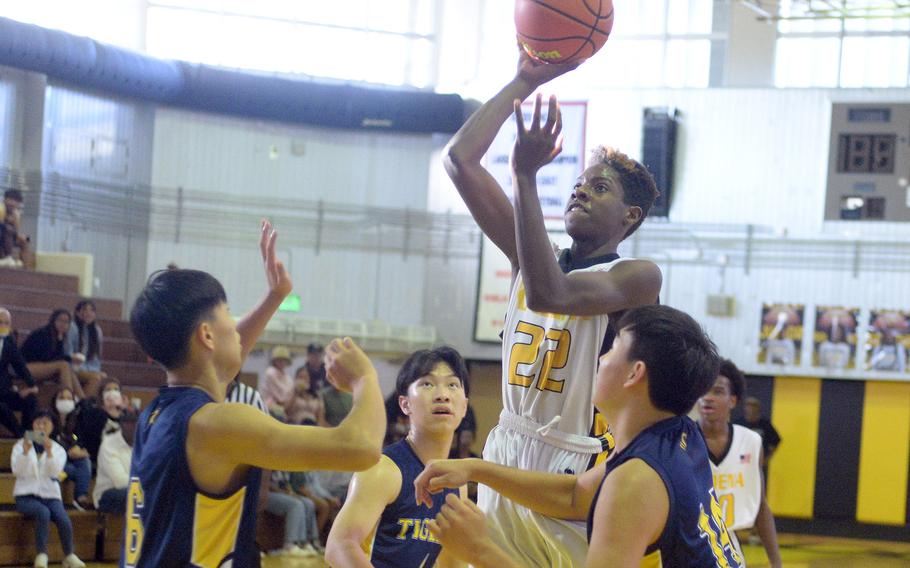 Kadena's Jayden Allen had 16 points and 16 rebounds in a losing effort Saturday as Taipei American rallied from behind 49-42 in the fourth quarter to beat the Panthers 55-53. (Dave Ornauer/Stars and Stripes) 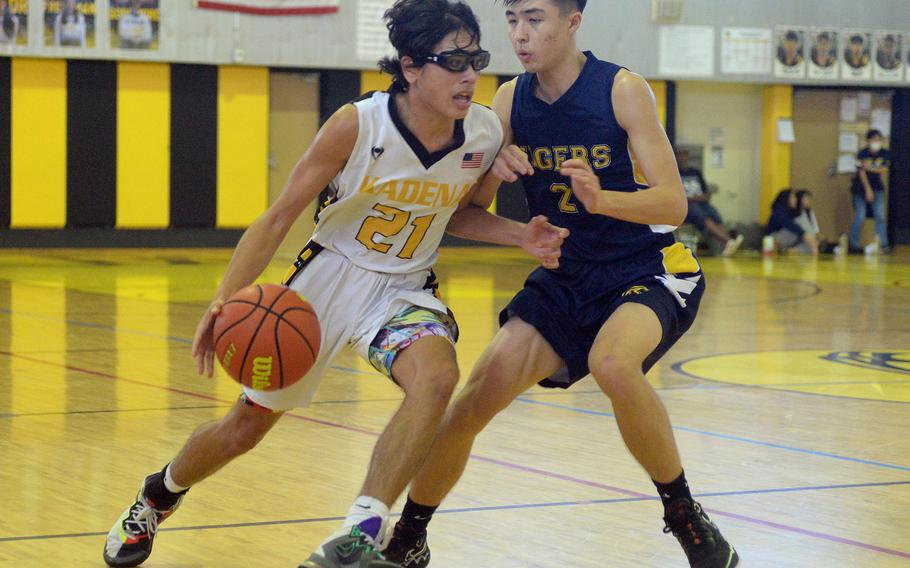 Kadena's Angel Torrado had 15 points and seven rebounds in a losing cause Saturday as Taipei American rallied from seven points down in the fourth quarter to beat the Panthers 55-53. (Dave Ornauer/Stars and Stripes)

Taipei and ASIJ didn’t have it much better, their coaches said.

Greg Garrison, who coached the Mustangs boys the last five years and is now Taipei American’s assistant athletics director, said ASIJ’s basketball teams had just five games each last winter, none against DODEA opponents. Taipei could only play other teams on Taiwan.

“I’m getting my basketball fix,” Garrison said during the Tigers’ boys’ 61-41 win at Kubasaki on Friday. “It’s nice to come to familiar ground, catch up with old friends and my old players. And it’s great being back in Japan. I love Japan.”

Joseph Schwartz won the boys 3.12-mile race in 18 minutes, 21 seconds, while Keira Paz took second for the girls in 22:09 and the Panthers won both the boys and girls team titles in Friday’s Guam private school All-Island finals at Two Lovers Point.

It adds another chapter to Joe Taitano’s coaching legend. A lifelong Guam resident, he has also coached the Panthers’ track teams to six straight boys and four straight girls island titles since leaving Guam’s public school circuit to teach and coach at Guam High in 2005.

“It gets better every time,” Taitano said. “The seniors ran well as expected, but the pack of underclassmen ran courageously every step of the way.”