In Korean hoops, it’s no longer just a league of their own Juniors Meiko Sowu and Beckham Clites and the Daegu boys basketball team should get a boost, coach and athetics director Blake Sims says, from playing in the Korean-American Interscholastic Activities Conference's second-tier Red Division. "This is a nice reset," Sims said. (Dave Ornauer/Stars and Stripes)

Check out team capsules for basketball and wrestling here.

YONGSAN GARRISON, South Korea – The climb out of the COVID ravine continues for DODEA-Korea’s basketball and wrestling teams.

From a year ago, when Daegu, Osan and Humphreys were only playing each other, the Warriors, Cougars and Blackhawks are back to full Korean-American Interscholastic Activities Conference regular-season schedules, a league postseason tournament and perhaps Far Easts, too.

“This is a nice reset,” Daegu boys basketball coach and athletics director Blake Sims said. “The enthusiasm and energy levels are up. And we’ve changed (KAIAC) divisions; we’ll be much more competitive against (schools) our own size.”

The Warriors join the Cougars in moving from KAIAC’s top-tier Blue Division to the second-tier Red Division, for schools with enrollments of 150 or fewer. The Blackhawks, with their comparatively huge enrollment, will remain in the Blue Division.

Regular-season play for all three began on Wednesday and continues through the Far East tournaments Jan. 30-Feb. 1, all the way to the KAIAC Cup and Plate Tournaments scheduled for Feb. 10-11, the Cup for teams above .500 and Plate for teams below within KAIAC’s three tiers. 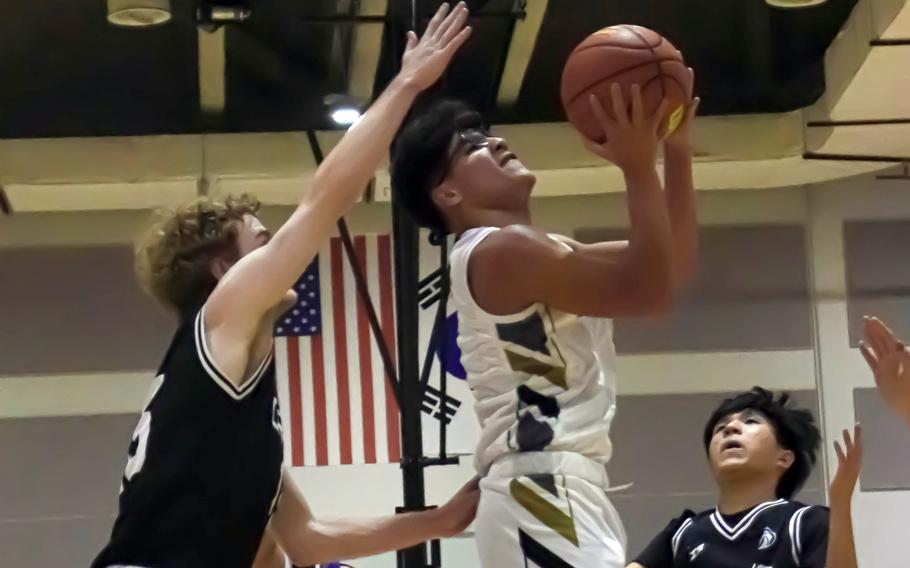 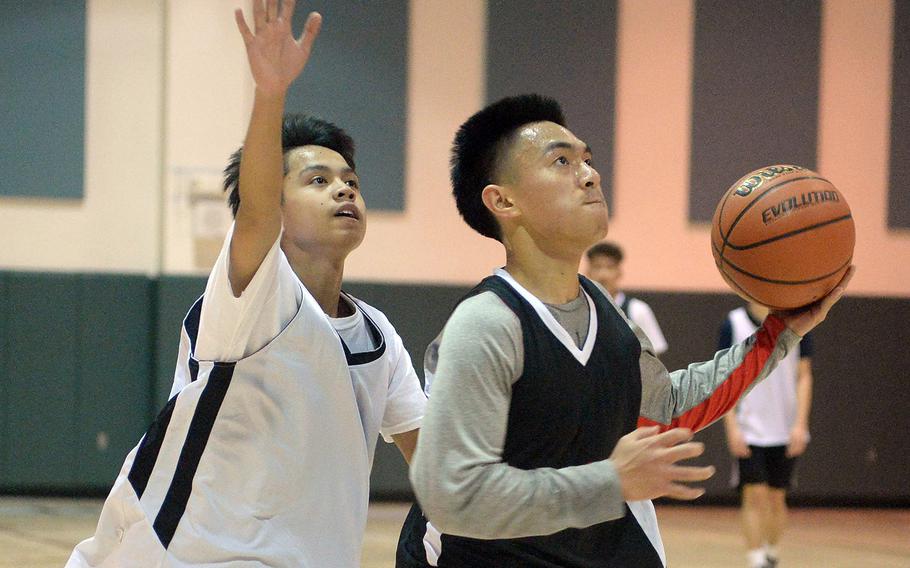 Daegu's boys basketball team features seven freshmen, such as Dredin Quichocho, but there are a handful of veterans like junior Adrian Tagalog, who transferred from Nile C. Kinnick in Japan. (Dave Ornauer/Stars and Stripes)

With so much to play for – some teams may also travel to the American School In Japan Kanto Classic in January – coaches throughout Korea say they don’t have to spend much time motivating their players.

“They have hustle, they have heart, they’re giving it their all and I never have to ask them,” said Humphreys new boys basketball coach Sheri Smith. “They just do it. And they’re transitioning well for a new coach.”

Of the six hoops teams at the three schools, five are coached by women, including Smith, who’s replacing six-year Blackhawks coach Ron Merriwether. The Blackhawks have a mix of youth and veterans, and it will be a question of how quickly they adapt to the KAIAC grind.

“They’re going to have to hit the ground running,” Smith said.

Upperclassmen populate most of the Humphreys’ girls team’s roster, including junior guard Anayah Reyes and seniors Stephanie Gabriel and Sabra Wrightsil. They also have a new coach, Suzanne Reyes.

Sims and the Warriors were blessed with three key transfers, junior Adrian Tagalog from Kinnick, sophomore Andrew Burks from Osan and junior Beckham Clites from Humphreys.

The Warriors girls have a healthy mix of upper and lower classmen. Seniors Emma Sims and Hazel Bell are two key holdovers, while the new point guard, freshman Zoe Stegall, is hardly new to the game.

Junior Tatiana Lunn, the youngest in a very athletic family at Osan, headlines a core group of six Cougars girls who have played together going on two seasons now. They have only one senior.

“I’m thinking we’ll have a good season and we definitely should make it to the Cup Tournament,” coach Brittany Bonner said. Trinity Harvey, Hannah Clites and Daegu's girls basketball team will play in the Korean-American Interscholastic Activities Conference's second-tier Red Division, which athletics director Blake Sims says will allow the Warriors to be "much more competitive against schools our size." (Dave Ornauer/Stars and Stripes) 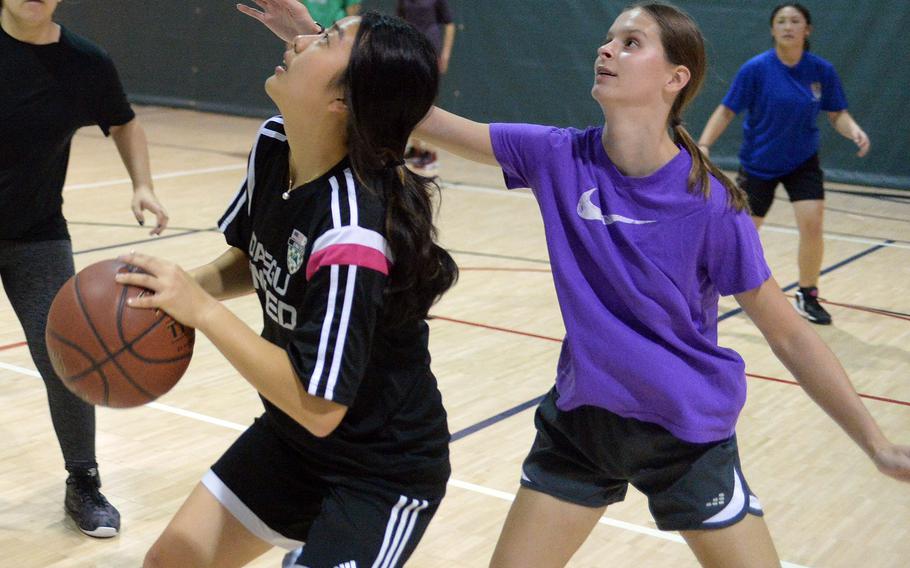 Two of the three schools have plenty of bodies in the practice room, but precious few have match experience.

Daegu, in fact, is pretty much starting from Ground Zero, with just three freshmen. “They’re all new to freestyle, learning and learning as we go,” coach Jeramie Lentz said, adding that the first competition Saturday at Daejeon Physical Education School will be “an eye-opener.”

Humphreys coach Ben Pak didn’t hesitate to say he looks to be competitive next school year, since most of his group of 41 athletes are new. Junior Andrew Wahlgren returns at 129; senior Levi Ramos, at 168, will miss the start of the season with a broken clavicle.

“The rest are new,” Pak said. “We are definitely rebuilding.”

And it’s not as though he’s lacking wrestlers – 21 total are in the room – but while he’s two to three deep at some weights, “we just aren’t filling all the weight classes,” Paul said. Senior 158-pounder Nathan Morales-Pizarro is one of a handful of veterans bolstering Osan's wrestling lineup. (Brian McCollum/Special to Stripes) 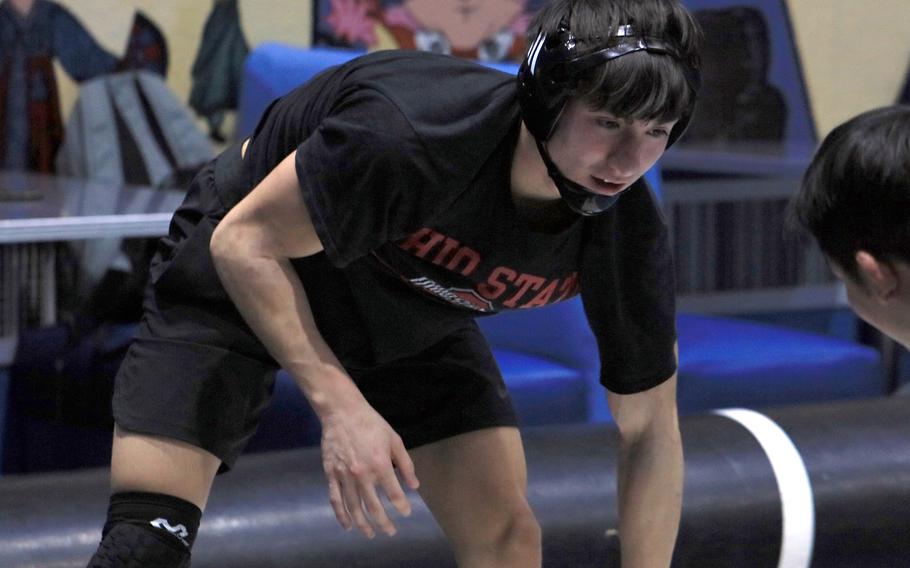 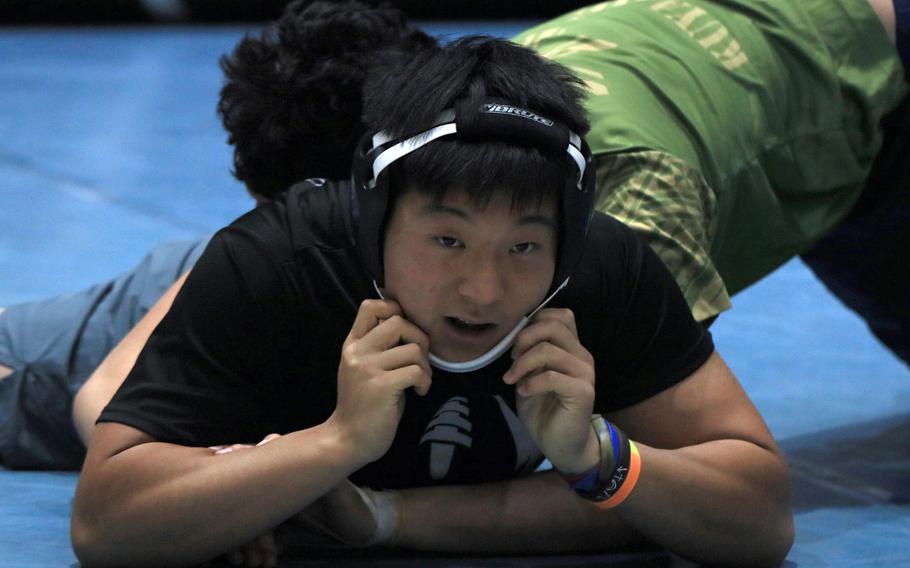