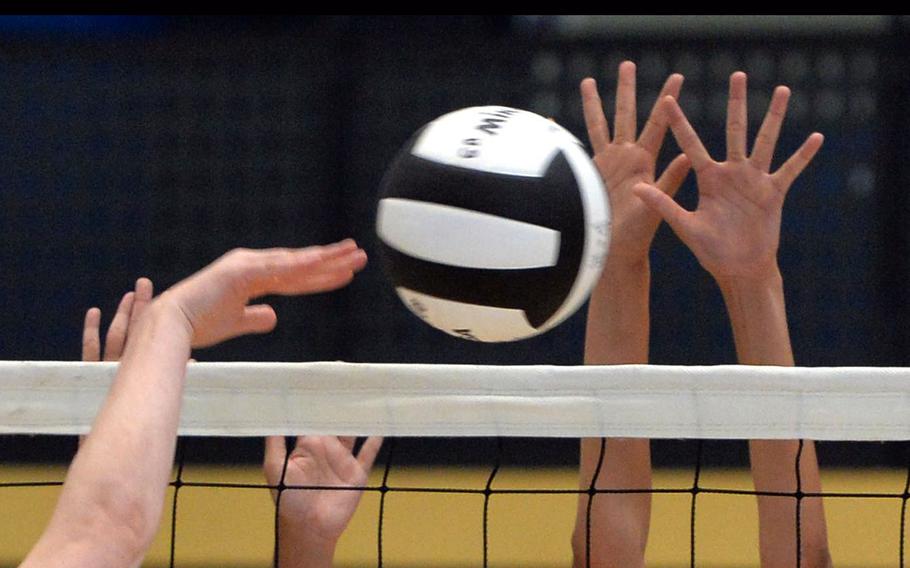 It’s not just the 8.75 kills per match that Bella Pula has averaged to help Humphreys’ girls volleyball team to an unbeaten season and a historic post-season tournament first.

“She is the glue” that brings cohesion and team spirit to the Blackhawks, first-year coach Casey Manson said Sunday, the day after Humphreys won the Korean-American Interscholastic Activities Conference Cup Tournament title.

Pula, a sophomore, was named the tournament’s most valuable player, and the reasons she stood out, both in the tournament at Dwight School of Seoul and during the regular season, were many, Manson said.

“She’s the one running plays, organizing the girls on the floor. When we call timeouts, she’s the one prepping us to go back (on the court),” Manson said. Pula plays volleyball year round – her mother Lorena is the team’s assistant coach – and plans to play volleyball in college.

Two other key cogs in the Blackhawks’ success were outside hitter Sabra Wrightsil, who averaged 8 kills per match, and Key Yandall, a setter who averaged 10.5 assists per match.

While Wrightsil can be a powerful hitter, Manson said her court vision and mental aspect of her game make her a well-rounded hitter.

“She’s able to see the court and place the ball where (opposing) players aren’t,” Manson said of Wrightsil. “She had more points by seeing where the holes were” in opponents’ defenses.

Saturday was a long day for both the Blackhawks and Cougars. They each played and won semifinal matches Saturday morning, but had to wait several hours for the final. It was scheduled at 6:30 p.m. but it didn’t start until 8 p.m. because earlier placement matches went long.

“It was an extremely long day,” Manson said. Her Blackhawks left Humphreys at 7 a.m. and didn’t return until about midnight. Osan left school at 9 a.m. Saturday.

The Cougars got plenty of offense from Ashley Kim and Shaylee Ungos – who missed most of the season with an injury and only returned for the KAIAC Tournament. Senior Margaux Edquid averaged 13.45 digs per match, and senior setter Angela Serrano averaged 25.3 assists.

Coach Susan Ungos described the Cougars season as one of changes and an all-around team effort.

“Nothing went as we thought it would go,” Ungos said of a Cougars team that had to adjust to injuries and multiple position changes. “That’s been our strength. They’re so resilient and they’re able to adjust to anything that comes their way. Learn and respond.”

The Cup tournament featured teams with winning records from KAIAC’s Blue, Red and White Divisions, a system that’s been in place since the 2018 season. Never before had two DODEA teams reached a Cup final.

“They played their game, they came to win and they did,” Manson said.