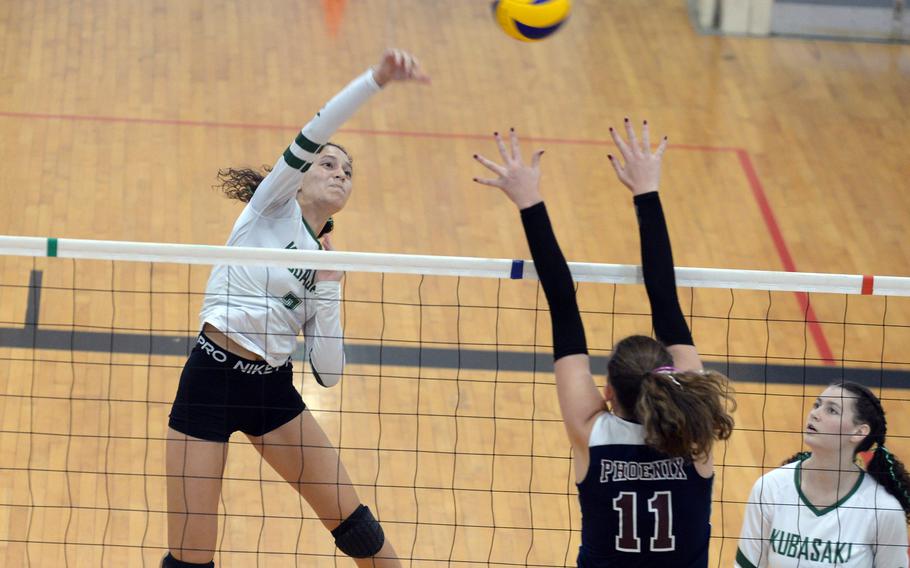 The sophomore was being asked to take over as the team’s setter following the graduation of its previous setter, captain and team leader Alyssa Alvarado. And according to Dragons coach Kent Grubbs, the transition to Berrens was seamless.

“As a sophomore, stepping into a senior leader’s shoes, she had a whole lot on her shoulders,” Grubbs said after Berrens recorded 30 assists to boost Kubasaki past Seisen International 25-21, 25-16 in Saturday’s Ryukyu Island Tournament final.

“I knew we had a great team” going into the season, Berrens said. “Us being together and having each other’s backs helped us get our wins.”

With the victory, the Dragons completed their second straight unbeaten season. They went 20-0 in 2021 and 20-0 again this year, capturing titles in two tournaments in as many weeks, including last week’s American School In Japan YUJO title for the second straight year.

“It’s hard to believe someone could step in as well as she did,” Grubbs said of Berrens, who was named the Ryukyu tournament’s Best Setter.

Kubasaki led the first set 23-15 before the Phoenix rallied to within two points. Following a Dragons timeout, seniors Sophia Grubbs and Risha McGriff scored back-to-back kills to close the set and Kubasaki was never threatened again.

Grubbs, the coach’s daughter, had nine kills, McGriff 13 and fellow senior Emma Leggio eight to pace the Dragons. Leggio and Grubbs each said they couldn’t think of a better way to end their four years together on the team.

“I feel so grateful to my teammates, coaches and God,” said Leggio, named to the All-Tournament team. “Growing up and playing with Risha and Sophia all four years was a blessing.”

“We all came here, did what we had to do, left it all on the court and now we’re leaving,” said Grubbs, named the tournament’s Most Valuable Player.

Ariana Hill had six kills and three block points and Lisa Purcell five kills and two blocks, but the Phoenix seniors came up short in back-to-back finals in successive weeks against Kubasaki.

“We got straight-up outplayed,” Seisen’s longtime coach Elizabeth Jury said. “We didn’t rise up and make the plays. And they’re (Kubasaki) a great team.” 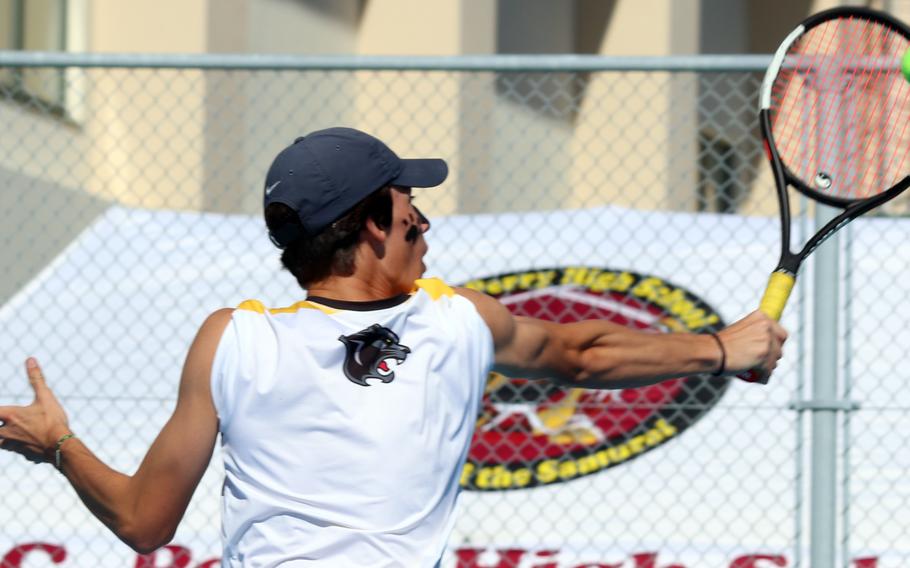 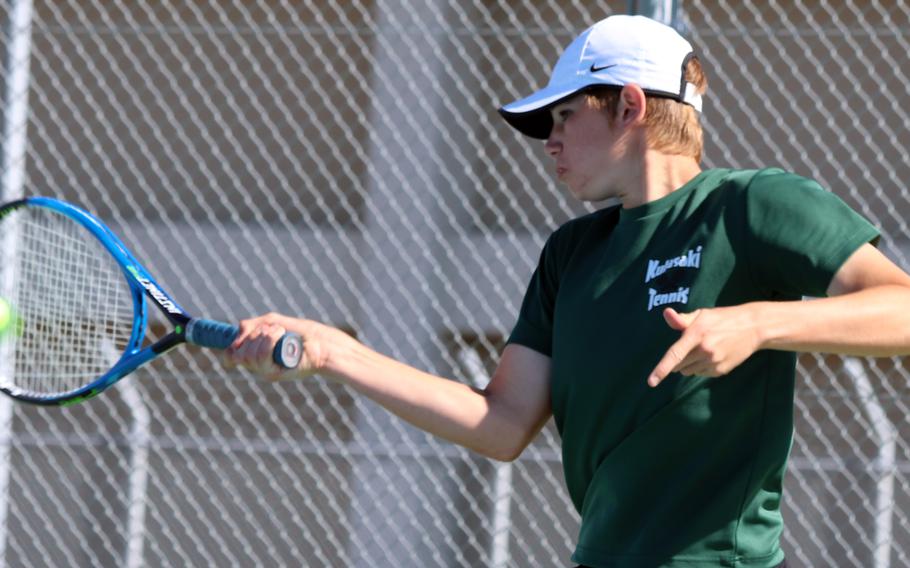 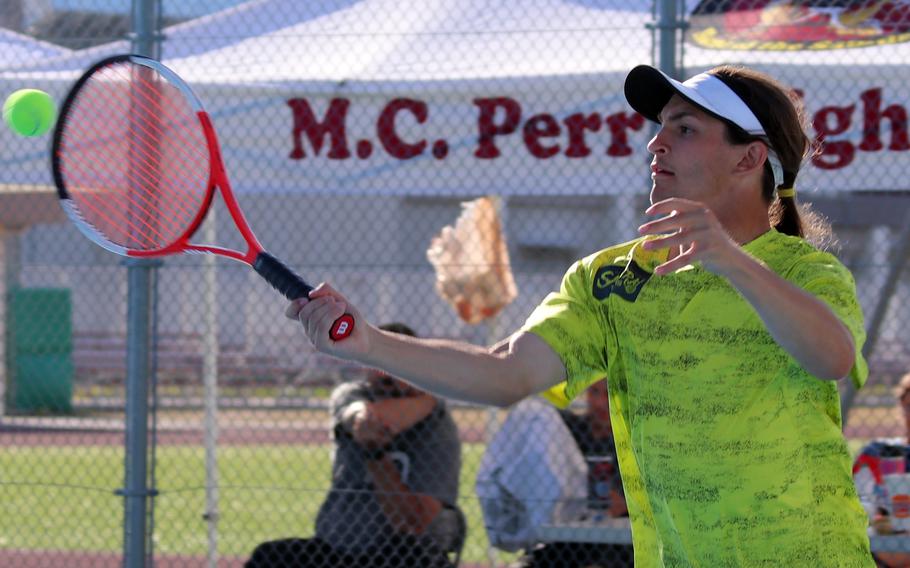 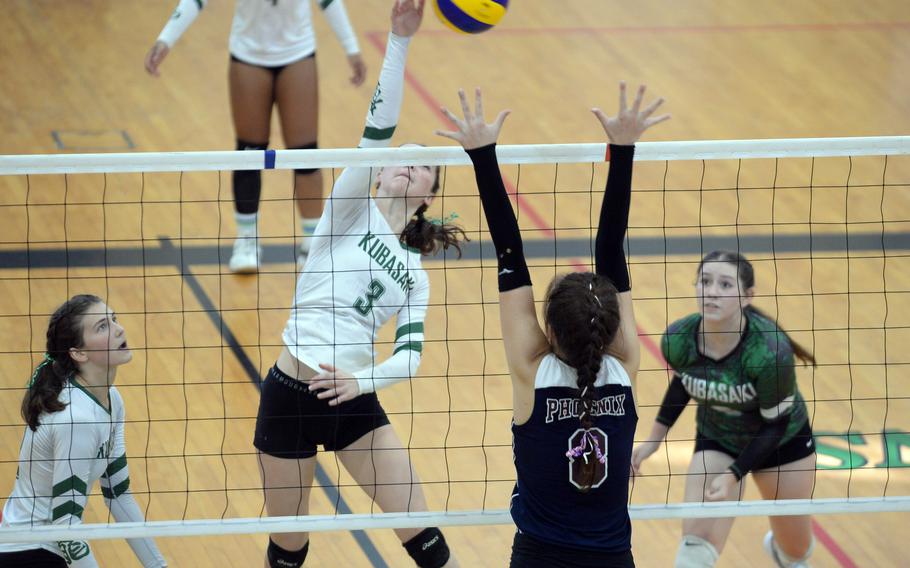 Kubasaki's Adria Lockhart sends one over the net against Seisen's Lisa Purcell. (Dave Ornauer/Stars and Stripes) 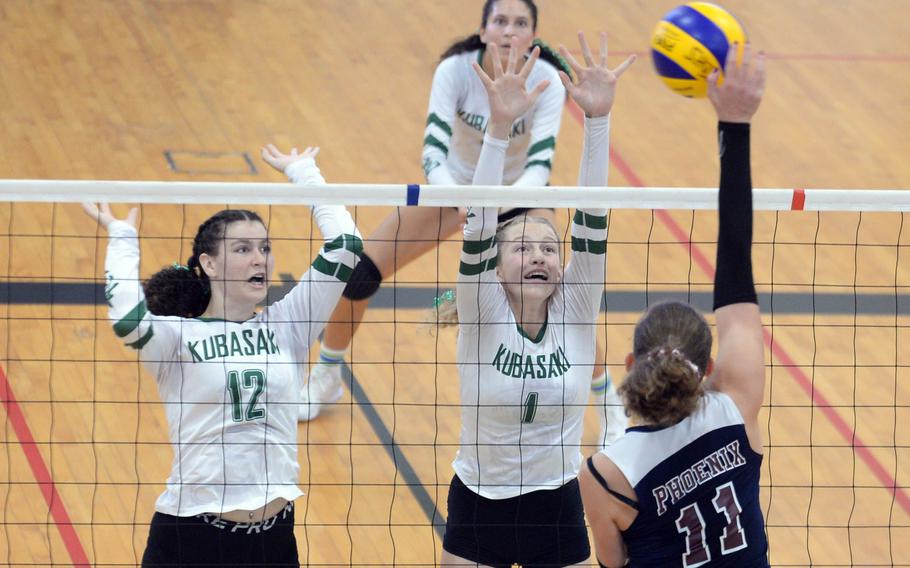 MARINE CORPS AIR STATION IWAKUNI, Japan – A month earlier, Kadena’s Evan Davis had lost a regular-season match 8-5 to Kubasaki’s Owen Ruksc. On Saturday, he atoned for that defeat and won a title to boot.

Davis beat his rival 6-4, 6-2 in the boys singles final of the All-Japan DODEA Tournament at Matthew C. Perry. He said keeping his composure and emphasizing placement over power led to his success.

“Always be able to respect your opponent, whether friend or foe,” Davis said. “Always try to keep a good attitude, whether winning or losing. We kept going to deuce, going back and forth. I calmed down the power and placed the ball and that made the difference.”

The girls singles final was a sister-sister affair, with E.J. King sophomore Moa Best outdoing her twin sister Miu 6-0, 6-4, a couple of hours after the two teamed to beat Nile C. Kinnick’s Emily Paul and Aiisha Lashley in the girls doubles final.

“It was hard,” Moa Best said. “We’re always playing each other and we’re teammates at the same time, so it’s hard being rivals.”

As for their father, McKinzy, the Cobras coach, it was “not difficult at all” controlling his emotions. “May the best girl win. I love them and care about them both.”

Humphreys placed fourth in the boys team standings and third in the girls standings. The Blackhawks’ Hanna Chung finished eighth in the girls race, tops among DODEA runners, in 24:40.6 and teammate Samantha Dales was 10th in 25:29.

CAMP HUMPHREYS, South Korea – Sean Cook closed his high school football career with 310 yards total offense and two touchdowns and Luke Robinson had 165 yards and a TD on 29 carries as Humphreys played to a 30-30 tie Saturday with Sungkyunkwan University. The Korean team declined to play overtime to decide it, Blackhawks coaches said. Humphreys finished 5-0-1 on the season.