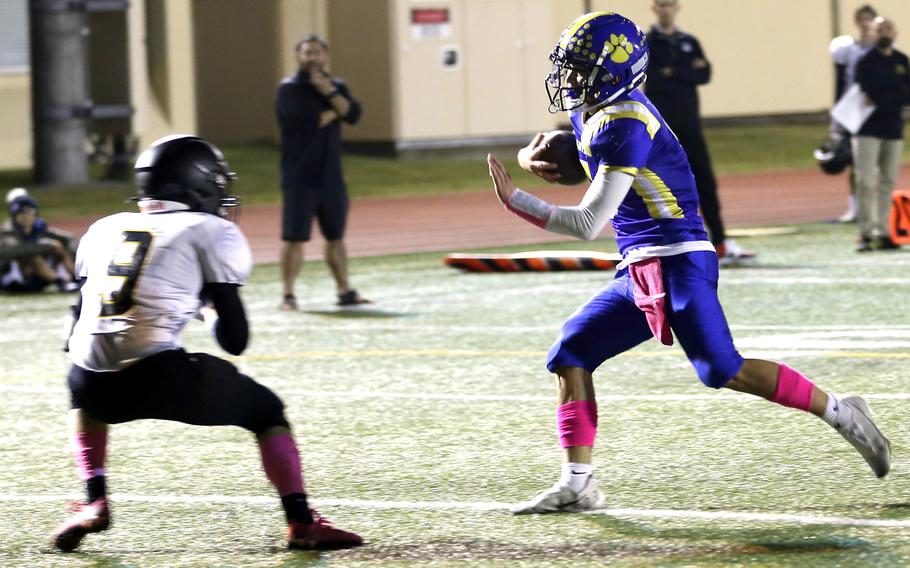 YOKOTA AIR BASE, Japan – Dylan Tomas closed out his high school football career in style, in front of family, friends and a former coach.

The Yokota senior quarterback accounted for four touchdowns and 240 yards total offense, boosting the Panthers past American School In Japan 38-6 Friday in the season finale for both teams.

“He’s been a vital cog in the team,” Panthers coach Michael Woodworth said. “He’s an amazing talent, his ability to scramble, read defenses and change plays at the line.”

Tomas went 16-for-19 for 165 yards passing with three touchdowns and rushed for 75 yards and a TD on just four carries.

Tomas did all that playing before family, some of whom flew in from the States for the game, and his former coach at Robert D. Edgren, Marcus Thomas, who drove down from Misawa for the contest. Tomas transferred to Yokota from Edgren in summer 2021. 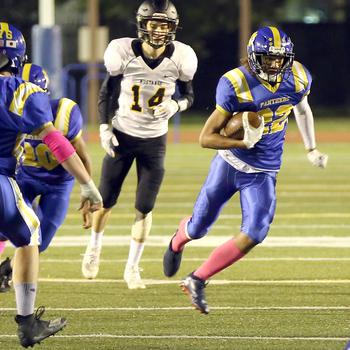 Damian Abrams caught four passes for 65 yards and two touchdowns, had an interception and a quarterback sack for Yokota. (Greg Holladay/Special to Stripes)

Damian Abrams had a huge game on both side of the ball for the Panthers. He caught four passes for 65 yards and two touchdowns, had an interception and a sack and forced a fumble.

Noah Cruz rushed for 80 yards and a pair of touchdowns on seven carries for the Panthers. Royce Canta had 20 yards on two catches with a touchdown and Aaron Valiente had three catches for 60 yards. Braden Pratt had two sacks and Casey Bumpers one for Yokota.

“What a great way to end the season,” Woodworth said. “Myself and Coach O (Rudy Oliveira) could not have asked for a better season and a better team.”

The Mustangs got their lone touchdown on a pass play from Joey Schulz to Stefan Merino.

Earlier Friday, ASIJ completed the fourth quarter of the teams’ Sept. 24 game at Mustang Valley, holding on to the 14-6 lead it had built when the game was halted by lightning and heavy rain. The Mustangs finished 2-4 this season against DODEA opponents.