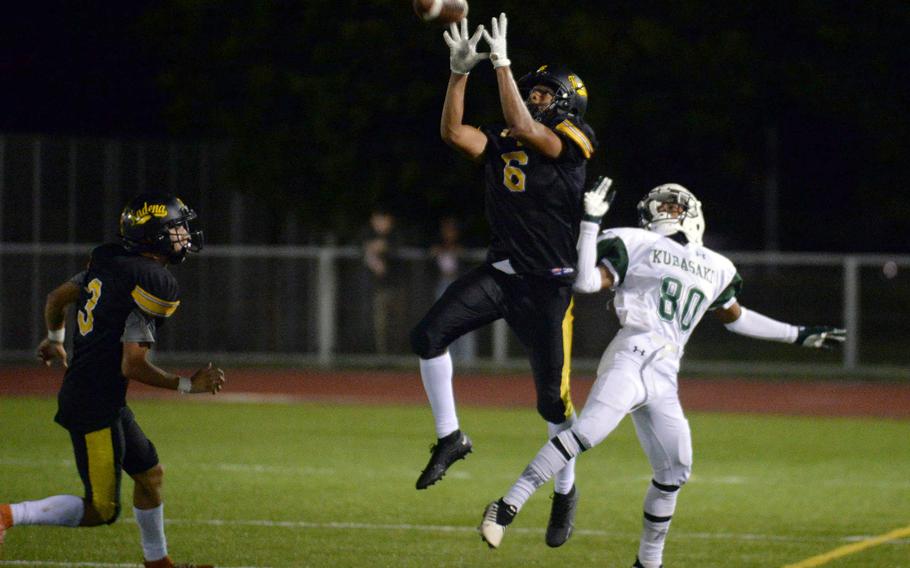 KADENA AIR BASE, Okinawa – Points were hard to come by in the first three quarters.

But Jeremiah Drummer and Anthony Chavez ran for touchdowns when Kadena needed them in the late going, giving the Panthers a 12-7 win over Kubasaki in Friday’s All-Japan DODEA Division I football title game.

“We slayed the Dragon,” said Chavez, whose 2-yard touchdown run with 6 minutes, 32 seconds left rallied the Panthers from a one-point deficit.

“I’m glad it came down to Chavez” to make the winning play, Panthers coach Sergio Mendoza said. “His intensity, his leadership; I’m glad he had this game and the play that won it.”

The game marked the end of a Division I season including only teams in Japan; due to coronavirus pandemic protocols, Humphreys was unable to participate.

Friday’s contest was another defensive struggle between two teams that split their two-game regular-season series. Kadena, which finished 4-1, won 8-0 on Sept. 9 at Kubasaki and the Dragons returned the favor 20-13 at Kadena three weeks later.

The Panthers’ defense recorded four sacks, a fumble recovery and an interception and held the Dragons to 141 yards on 45 plays. The Dragons (5-2), whose five-game winning streak came to an end, didn’t help themselves with five dropped passes.

“We didn’t execute,” Dragons coach Tony Alvarado said. “We had a plan in place, but when you drop five passes (and turn the ball over twice), you’re not going to win games.” 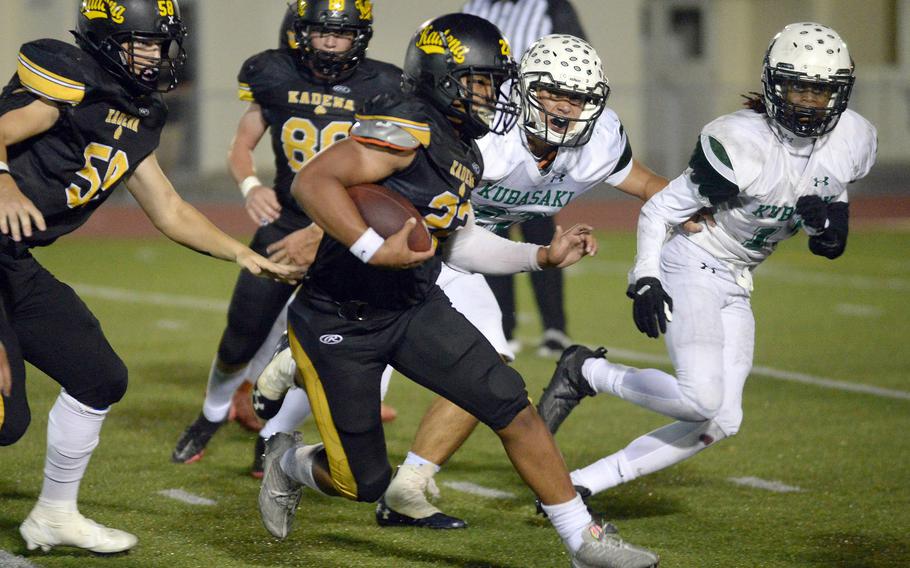 Jeremiah Drummer broke free on an off-tackle run late in the third quarter to put Kadena on the board first. (Dave Ornauer/Stars and Stripes) 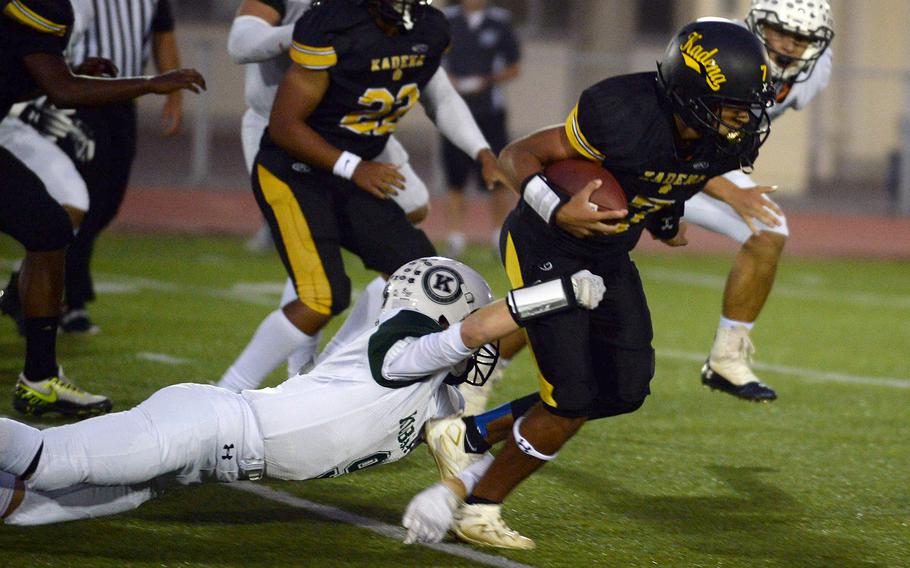 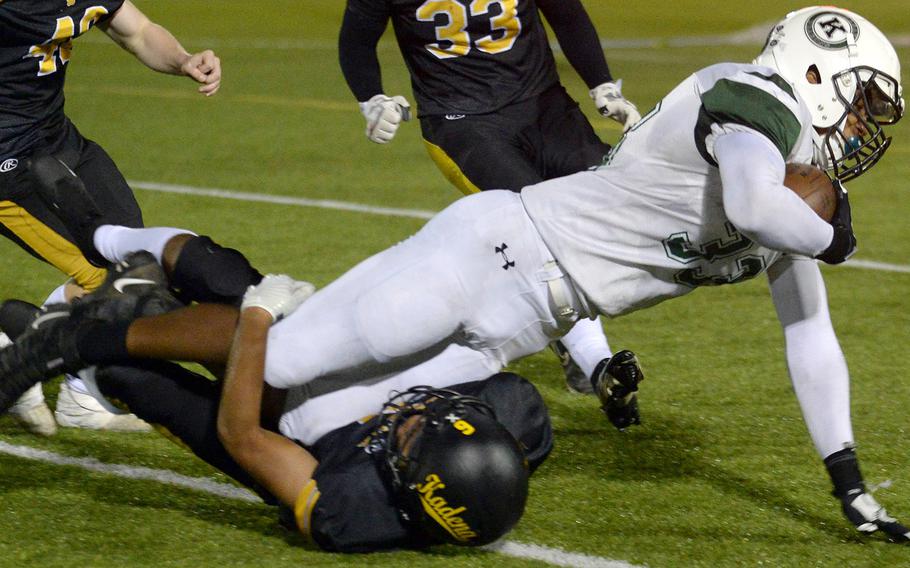 Kubasaki's T.J. Reese is brought down short of the goal line by Kadena's Kai Christy, on a pass play that set up the Dragons' lone touchdown. (Dave Ornauer/Stars and Stripes) 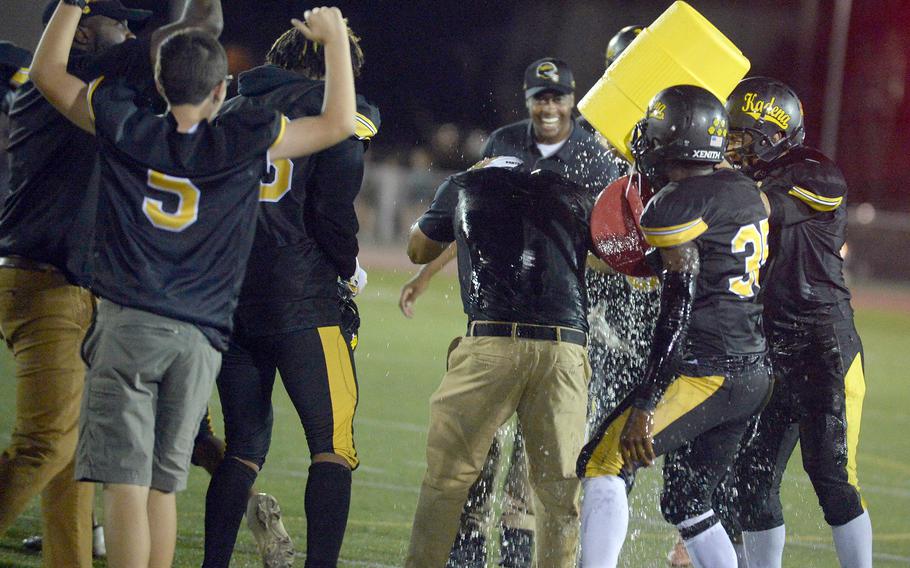 Kadena coach Sergio Mendoza gets the water-bucket treatment while players and spectators celebrate the Panthers' victory. (Dave Ornauer/Stars and Stripes)

Neither team was able to find the end zone until Drummer, a junior fullback, took a handoff off right tackle and burst into the clear along the right sideline into the end zone with 17 seconds left in the third quarter. Kadena failed on the two-point conversion try.

“He became the next-level running back we needed him to be all season,” Mendoza said of Drummer, who led the Panthers with 139 yards on 22 carries. He also recovered a first-half fumble.

The Dragons promptly answered with a 65-yard, seven-play scoring drive in less than two minutes. Quarterback A.J. Millette snuck in from 2 yards out and David Allison’s extra-point kick made it 7-6.

Then it was Kadena’s turn. The Panthers went 71 yards on the next seven plays, capped by Chavez’s touchdown.

He had 47 yards on 11 carries for a Panthers offense that stayed almost exclusively on the ground, 198 yards on 45 carries. Kadena lost starting quarterback Cameron Wilson to a first-quarter injury and backup Braxton Reece handled the offense from there.

While the Dragons played the previous two weeks against Nile C. Kinnick, winning 16-8 on Oct. 14 at Yokosuka Naval Base, then 6-0 at Kubasaki in the Oct. 22 D-I semifinal, the Panthers had three weeks off following their 24-2 win at Kinnick on Oct. 7.

“We had three weeks off, we were prepared, but that went out the window when the quarterback got hurt,” Mendoza said. “So we had to go to Plan B, which was heart. I told the guys, win or lose, I love them and let’s just go out there and play like men.”

It turned out to be good enough for Kadena, which holds the Pacific record with seven Far East D-I titles, to capture this one-of-a-kind All-Japan D-I title.

“Kubasaki’s a good team, a strong team. I congratulate them on a great season,” Mendoza said.

Likewise, Alvarado saluted his rivals. “They were well prepared and they played great,” he said.