Kubasaki-Kadena battle No. 3 will determine champ 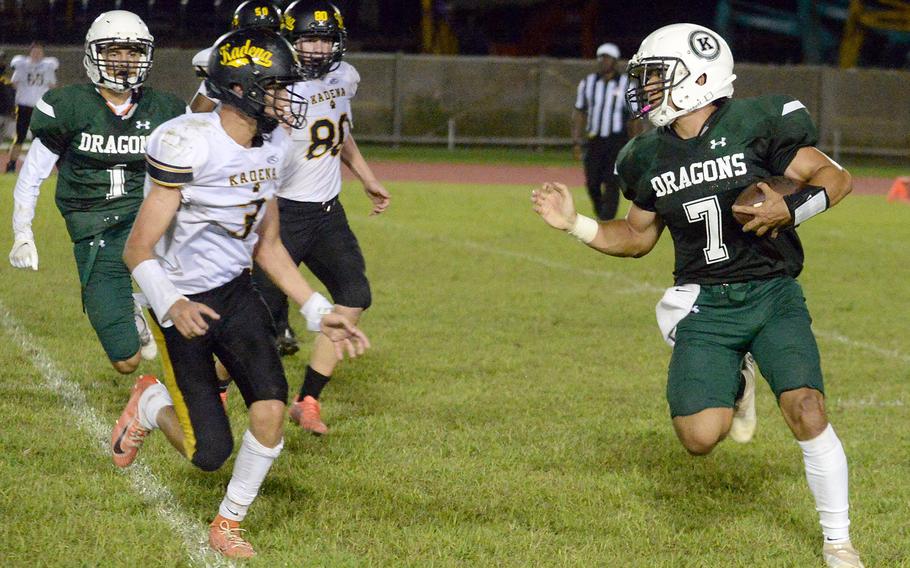 A.J. Millette and Kubasaki will look to make it six straight wins, while Anthony Chavez and Kadena hope to finish 4-1 in Friday's All-Japan DODEA football final. (Dave Ornauer/Stars and Stripes)

KADENA AIR BASE, Okinawa – They have been as familiar with each other as cupcakes are to icing.

Kadena and Kubasaki square off for the third time this season at 6 p.m. Friday for the All-Japan DODEA Division I football crown at Ryukyu Middle School’s Habu Field, the Panthers’ home ground.

The two teams play three times on average per regular season and have played each other for the Far East Division I title three times.

They split during the current regular season, the Panthers (3-1 overall) winning at Kubasaki 8-0 on Sept. 9 and the Dragons returning the favor 20-13 three Fridays later.

Because of that one-point differential and both teams having swept Nile C. Kinnick, Kadena earned the top seed and host rights to the final. They also earned a three-week bye while the Dragons and Red Devils tussled it out to see which would be the D-I final visiting team.

“The challenge was keeping the knife sharpened for 20 days,” coach Sergio Mendoza said of the long rest following the Panthers’ last game, a 24-2 rain-soaked win at Kinnick on Oct. 7.

“These kids have put in a solid 20 days’ worth of work. That’s a challenge in itself. But we’re healthy. I think we’re going to play a good football game,” Mendoza said.

Kadena and Kubasaki, as familiar a pair of foes as they come, are set to square off for a third time this season for the All-Japan DODEA Division I football championship at 6 p.m. Friday. (Dave Ornauer/Stars and Stripes)

Their opponents, the Dragons (5-1), haven’t had the benefit of a bye; thus, coach Tony Alvarado has had to ensure his players remain healthy and injury-free while at the same time preparing for an opponent in far less time than Kadena had.

“We have to earn it, work hard and leave everything on the field,” Alvarado said. “Going back to fundamentals, tackling, blocking, ball security; Kadena’s had three weeks to get ready, so we’re teaching the guys to carry out their responsibilities so we can be ready for them.”

It will likely be a battle of backfields, as each team leans on its power running game. Kubasaki brings Gavin McKnight, Aiden Sablan and speedster Godfrey Wray to the table, while Kadena relies on Anthony Chavez, Jeremiah Drummer and Javante Vickers.

While Friday’s game isn’t a true Far East final, it’s as close as the teams have come since the onset of the coronavirus pandemic, which shut down the 2020 season and forced Kadena and Kubasaki to only play each other in 2021. Humphreys still hasn’t played any Japan teams.

“We’re slowly climbing out of COVID time,” Mendoza said, adding that because of the lost years, “it’s going to be a growth process for everybody. But we’re making progress from the time that we lost.”