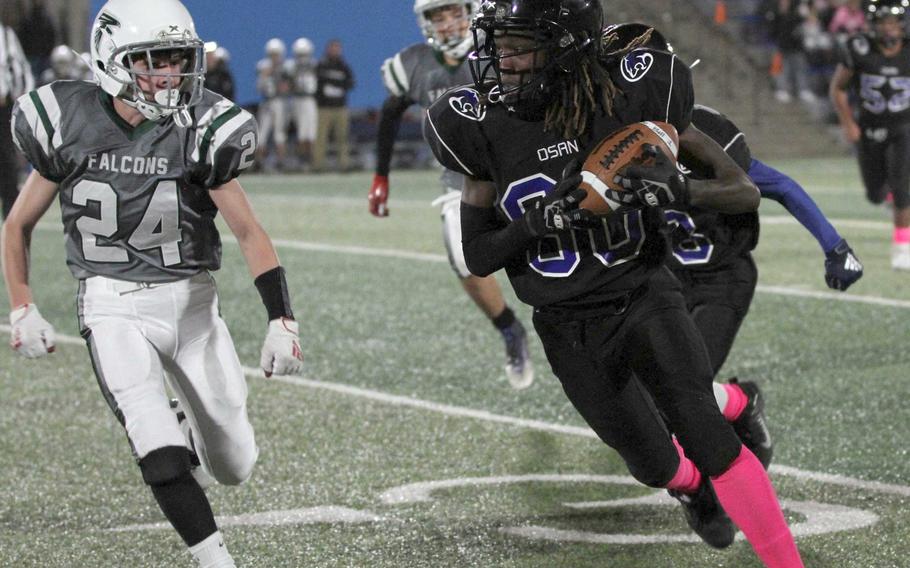 OSAN AIR BASE, South Korea – Jaylon Grant spent his last game in an Osan uniform scoring on all sides of the football.

The senior receiver/defensive back/placekicker caught a pass for a touchdown, returned an interception for a score and booted four extra points to boost the Cougars to a season-ending 40-6 victory over the Singapore Falcons.

“He can take over a game on offense, defense and special teams,” Cougars coach and athletics director Jerome Learman said of Grant.

Learman recalled a game the Cougars played at Zama in 2019, when the Trojans won 66-24 and then-sophomore Keshawn McNeill caught two touchdown passes and returned a kick 91 yards for a score.

“He (McNeill) just took over that game. To me, Jaylon became that guy for us,” Learman said. “And he’s a great young man off the field. A good all-around person.”

With the victory, the Cougars finished the season 1-2 overall, with the two losses coming against Humphreys. 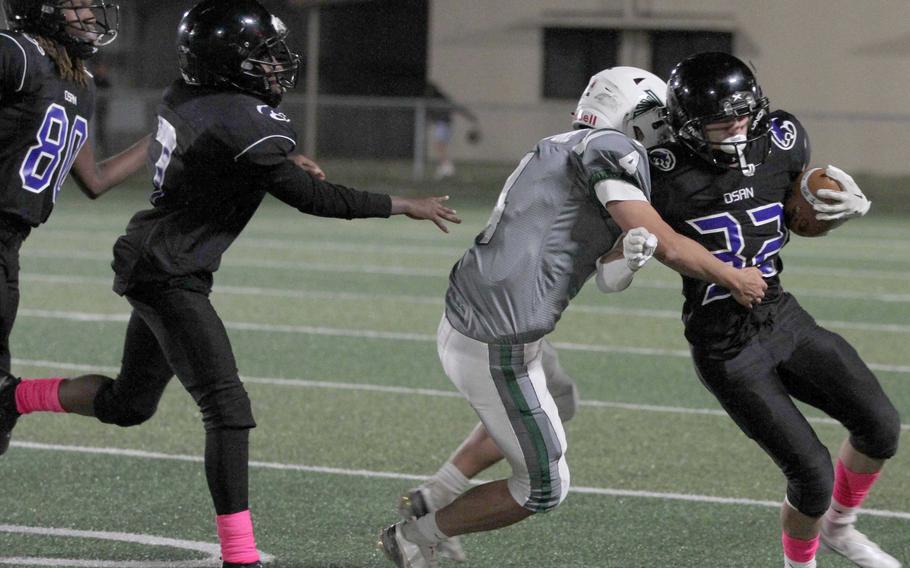 Singapore went 0-2, including a 45-7 loss at Humphreys on Friday. It was the Falcons’ first road swing to Korea in seven years and first 11-man games in three seasons, according to coach Jeff Majestic.

“Learning the game of football, learning to be competitive,” Majestic said of the takeaways from the trip to Korea. More than half of the Falcons are playing football for the first time. “These trips are so valuable for these kids to understand what football means.”

“It’s nice to play a traveling squad,” Learman said. The Cougars haven’t faced any teams besides Humphreys since the 2019 season, when teams in Japan and Korea traveled to face each other.

All of the Cougars’ scoring came in the first half. Grant caught a 19-yard touchdown pass from Josh Low, then Justice Parker-Jones rushed 29 yards for a score and Adam Rutland and Eddie Kim had 3- and 1-yard scoring runs.

Then the defense chimed in for the Cougars. Grant took an interception 60 yards for a touchdown, then A.J. Panboon ran back another one 46 yards to cap Osan’s scoring.

Learman then inserted reserves and kept them there for a fifth quarter played with a running clock. The Falcons scored late in the fourth quarter when quarterback Heathe Billingslea ran 3 yards for a touchdown.

“We go out on a positive note,” Learman said. “We’re proud of both the improvement (on the field) and the good young men they have become.”

“There were a lot of positives, maybe not on the scoreboard, but in the development of these young kids,” Majestic said. “Hats off to each team, two different styles of football. Osan executed flawlessly and so did Humphreys.”