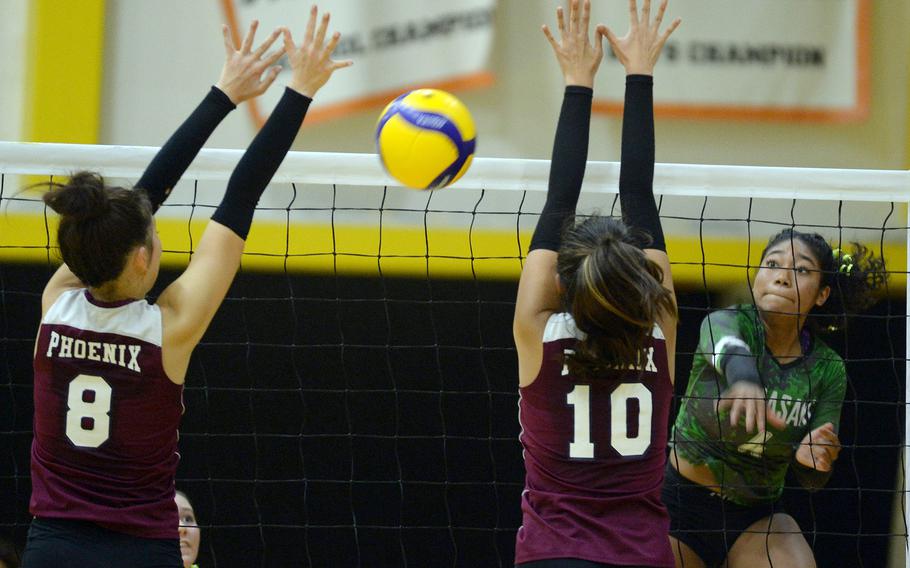 TOKYO – Steadily, Seisen International chipped away at Kubasaki’s lead, turning a 19-12 third-set deficit into a 19-19 tie and threatening to turn the momentum of a match that had been decidedly in the Dragons’ favor the first two sets.

No more points for the Phoenix, Kubasaki’s Risha McGriff said she told herself during a Dragons’ timeout. Time to put the match away for good.

So the senior outside hitter did just that.

McGriff fueled a Kubasaki run of six straight points with three spike kills, including the clinching point as Kubasaki swept the Phoenix 25-16, 25-13, 25-19 in Saturday’s final of the 8th American School In Japan YUJO volleyball tournament.

“That was enough,” said McGriff of Seisen tying the third set at 19 apiece. “We didn’t travel all this way for nothing. We come to practice every day, every day we work hard and we came here to win.”

Kubasaki won the YUJO tournament for the third time in five finals appearances, but the first time since 2018. And the Dragons avenged a three-set loss in the 2019 Far East Division I Tournament final to the Phoenix at Camp Humphreys, South Korea.

“It’s an amazing group of girls,” coach Kent Grubbs said of his Dragons, which feature six seniors including McGriff. “They just keep lifting each other up, over and over.”

Three of those assists came in a first-set stretch in which Sophia Grubbs hit three kills from the left side, which was the turning point of the match.

“We got good passes from the back row, got good sets (from Berrens) and I just kept putting the ball down,” Sophia Grubbs said. “Good teamwork. I couldn’t do it without my team.” 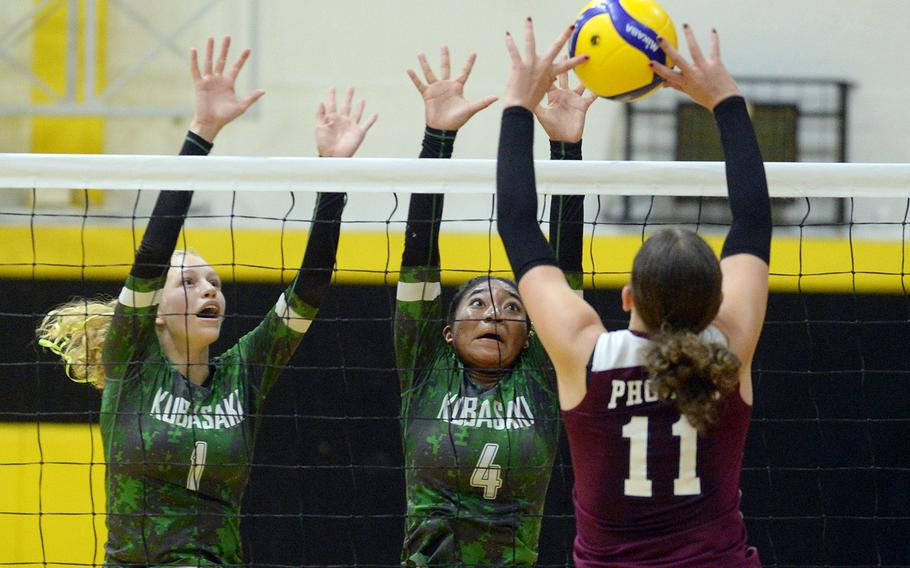 Kubasaki's Emma Leggio and Risha McGriff go up to contest a shot by Seisen's Ariana Hill. (Dave Ornauer/Stars and Stripes) 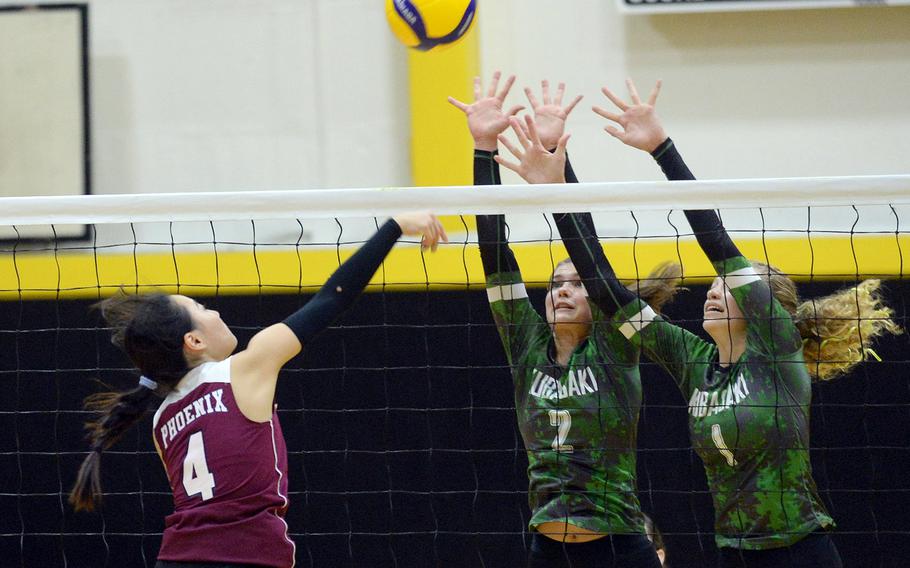 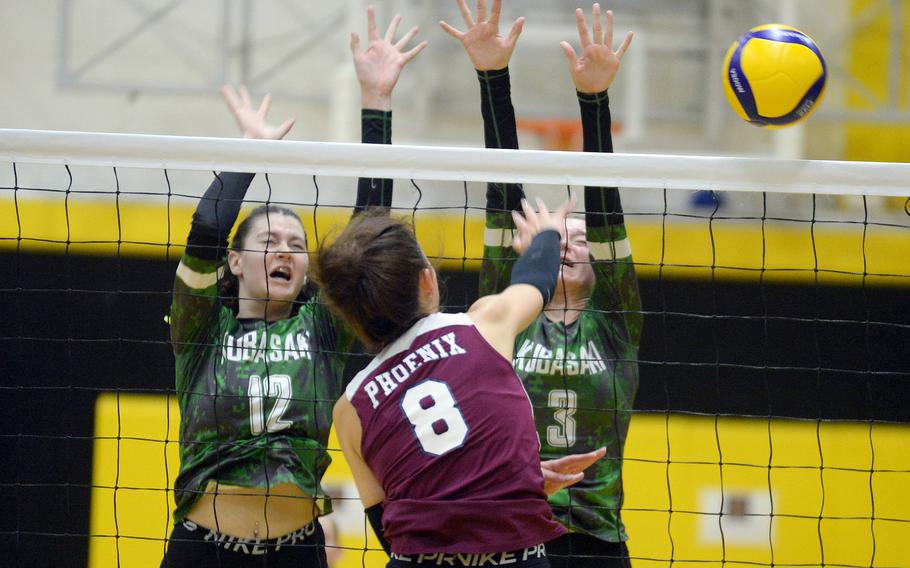 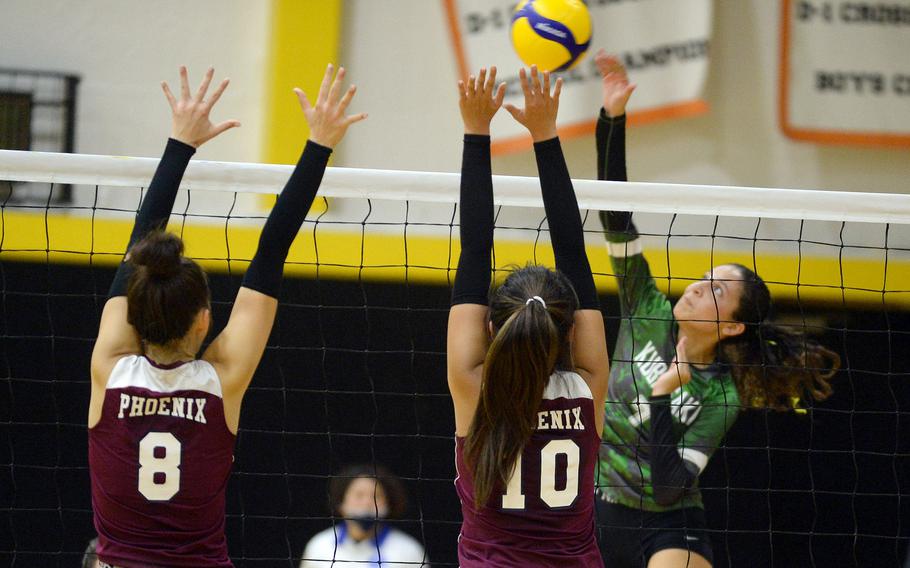 With the win, the Dragons improved to 12-0 on the season against DODEA and international school opponents.

“I’m happy the girls who were there (in the 2019 Far East) were able to show what they’ve been working on,” the elder Grubbs said. “They never gave up. Three years of building each other up and it showed.”

Senior hitters Ariana Hill and Lisa Purcell did their best to keep the Phoenix in it but couldn’t catch the Dragons. Hill had eight kills and three block points, Purcell 11 kills and setter Aina Sekido 18 assists.

It was the first loss for the Phoenix in 16 matches against international and DODEA foes this season.

“We know we can do better,” Hill said.

There remains one more challenge for the Dragons and Phoenix: Kubasaki next weekend hosts the DODEA All-Japan finals at Camp Foster, Okinawa, and the Phoenix will be in attendance as well as six DODEA-Japan and two DODEA-Okinawa teams.

“It’s not over yet. We get back to work on Monday,” Kent Grubbs said.

Leggio, Grubbs and McGriff were named to the All-Tournament team, as were Purcell and Hill.

Led by the tournament’s Most Valuable Player, sophomore Liz Turner, E.J. King rebounded from a two-set semifinal loss to Kubasaki to sweep Nile C. Kinnick in the third place match.

For the first time, the YUJO featured boys competition and Canadian Academy outlasted Seoul Foreign in five sets to capture the boys crown.