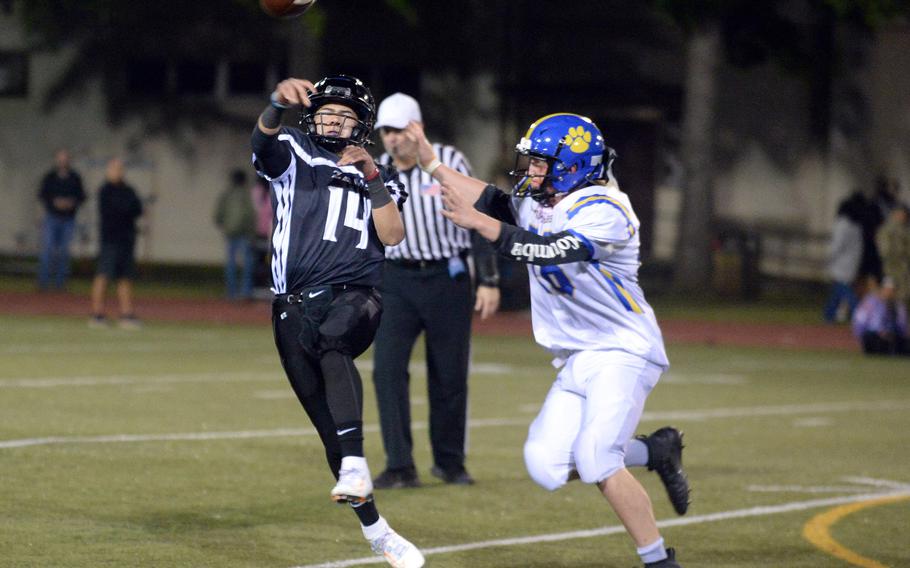 CAMP ZAMA, Japan – Jeremiah Georges turned to look over his left shoulder, with two Yokota defenders in his wake, as the football arced toward him in the corner of the end zone.

“I wasn’t expecting the ball,” the Zama junior wide receiver said, “but I saw it in the air and I went and caught it. My first homecoming here, I was happy to score touchdowns for the team.”

It was the first of his three touchdowns catches, coming 3 minutes and 32 seconds into Friday’s game, helping the Trojans (6-0) make their homecoming a happy one and complete a season series sweep of the Panthers, 28-13 at Zama’s Barry Huitema Memorial Field.

“He was a move-in at the end of last season,” Zama coach Scott Bolin said of Georges, who came from Point Mugu, Calif. “We knew he could play, but he’s been increasingly, systematically doing what our receivers do. He’s filling the role and he’s absolutely a great player.”

Georges finished with seven catches for 66 yards; his other two touchdowns came on throws of 9 and 13 yards from Kai Kuroda, a fellow junior who went 16-for-32 for 126 yards. Kuroda also threw a 1-yard scoring pass to Caleb Schmiedel.

“It was a great pass,” Georges said of his first touchdown catch. “Without Kai, it would not have been possible. It was very important for the team to go out and execute.”

The two teams had clashed at Yokota’s homecoming two weeks before, and in driving, game-long rain, the Trojans edged the Panthers 7-6 in double overtime.

This time, the Trojans offense and defense left little to chance. Hiroki Davis rushed 11 times for 87 yards and had 151 all-purpose yards. Connor Lape had one of three Zama sacks of Yokota quarterback Dylan Tomas and also intercepted Tomas.

“These kids have persevered,” Bolin said. “We haven’t had a home game in six weeks. Lights out to our defense and to our coaching staff. They make my job easier. It’s a pleasure.” 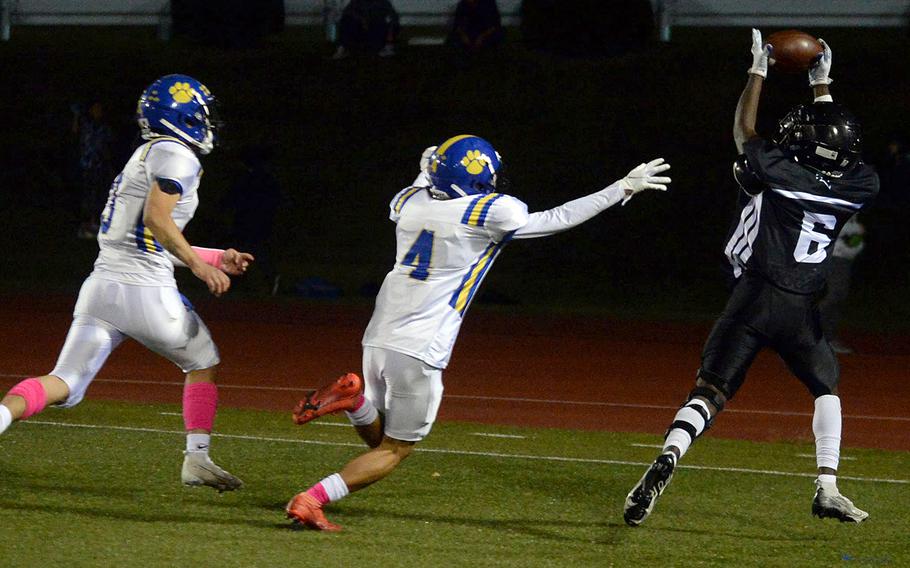 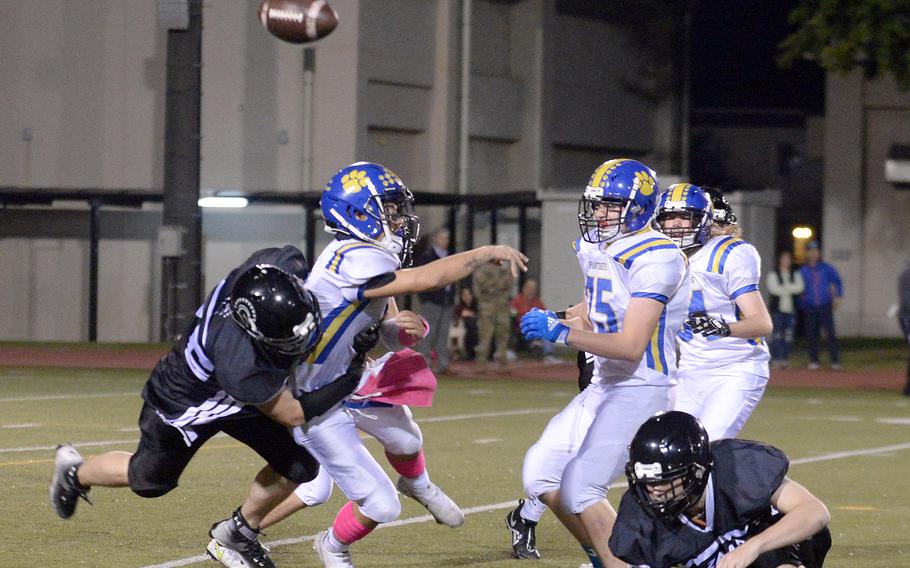 Yokota quarterback Dylan Tomas has the ball knocked out of his hand by Zama defender Kainoah Venn. (Dave Ornauer/Stars and Stripes) 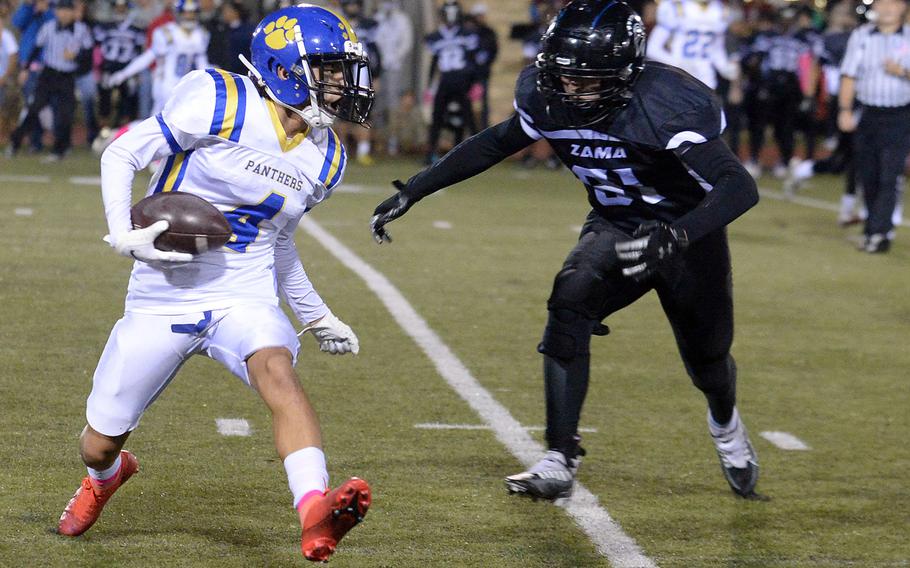 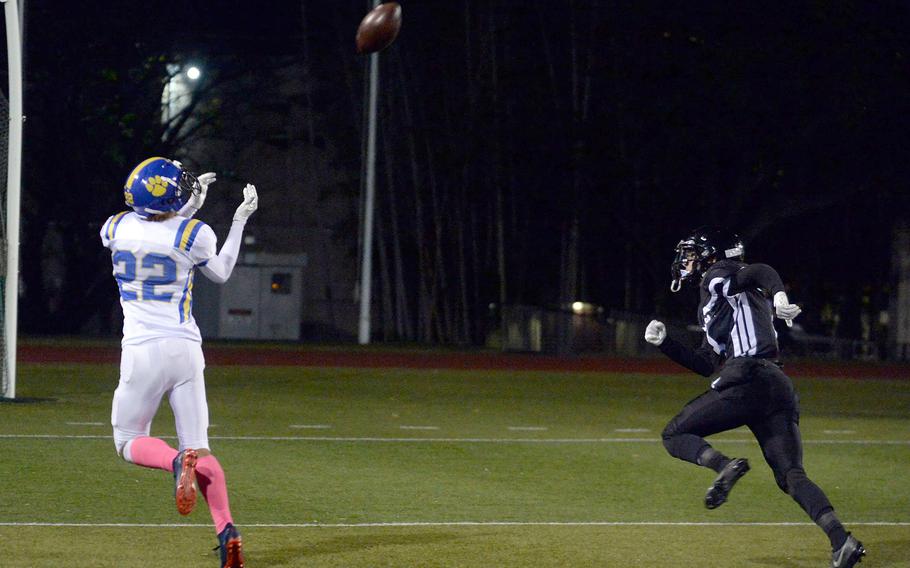 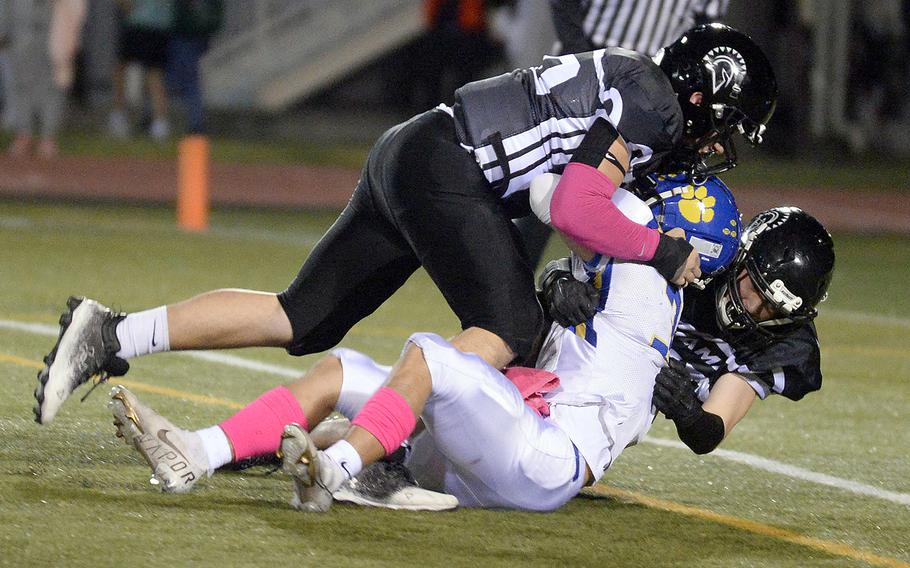 Tomas finished 10-for-23 for 104 yards, throwing touchdown passes of 23 and 16 yards to Damian Abrams, and had 115 yards total offense. Abrams had three receptions for 47 yards. Kamaury Freeman intercepted Kuroda, returning it 66 yards to set up Abrams’ second TD catch.

Injuries bungled things up for the Panthers (3-2), in particular losing returner-receiver DeShawn Bryant to a second-quarter back injury.

“That’s a big hole in our offense and defense,” Panthers coach Michael Woodworth said. “Our biggest issue was execution in some of our pass plays. And that’s a heckuva team over there. They deserved that win.”

Yokota ends its campaign hosting American School In Japan next Friday. They’ll complete a game at ASIJ on Sept. 24 that was suspended by lightning, then play their regularly scheduled game. Kickoff is at 6 p.m. for the makeup.