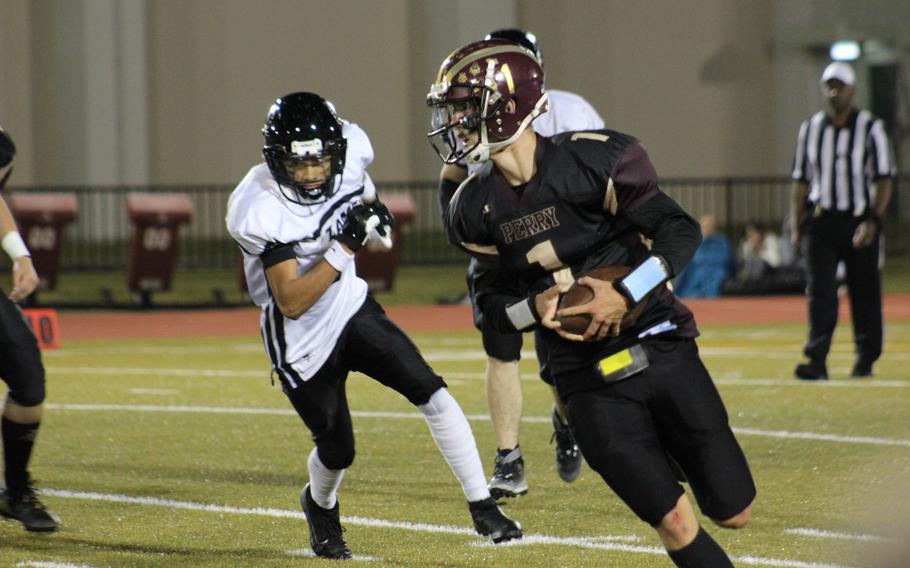 MARINE CORPS AIR STATION IWAKUNI, Japan – It took awhile for Zama to get going Friday, but once the second quarter began, Kai Kuroda and the Trojans pulled away for a 35-2 win at Matthew C. Perry.

Kuroda, Zama’s junior quarterback, ran for a touchdown and passed for three others and the defense forced three fumbles as the Trojans remained unbeaten at 5-0 this season with two more games to go. Perry fell to 2-3 with the loss.

“It took us a quarter to get a groove going,” Trojans coach Scott Bolin said. “The defense did a great job of holding the line until we could get started on offense and doing what we like to do.”

Kuroda rushed 7 yards for a score and threw for touchdowns of 3 yards to Chris Jones, 22 to Jeremiah Georges and 38 to Ryan Pena. Bedell Hurey added a 6-yard scoring run. Chris Nagle, Connor Lape and Simone Escalante recovered fumbles for Zama.

The Samurai’s lone points came on a first-quarter safety that cut the Trojans’ lead to 7-2.

“We stayed with them pretty good, played them tough and played them tight in the first half,” Samurai coach Billy Henry said. “In the second half, they just wore us down.”

The Trojans were coming off their 7-6 in double overtime a week earlier at Yokota and are scheduled to host the Panthers next Friday for homecoming, with the winner to hold the unofficial designation of best Division II team in Japan.

“It’s tempting to look ahead” to a rematch with Yokota, Bolin said. “But our focus was OK. Everybody was zeroed in. Perry just played a tough first quarter against us. Once the guys woke up from that, we zeroed in and took care of business.”

Perry hosts Robert D. Edgren next Friday at 7:15 p.m. in its home finale, then visits Zama on Oct. 28 for its season finale.