Dragons slog through rain, past Kinnick Kubasaki running back Aiden Sablan scored the game-winning touchdown late in the third quarter and ran in both two-point conversions for the Dragons. (James Kimber/Special to Stripes)

Aiden Sablan rushed 23 yards for a touchdown late in the third quarter and the Dragons defense recovered three fumbles and intercepted a pass as Kubasaki outpointed the Red Devils 16-8 in a rare Thursday homecoming game.

“It was a great tuneup for us to get ready to play against a very strong Kinnick team,” said coach Tony Alvarado, whose Dragons improved to 4-1 overall and 3-1 in D-I with their fourth straight win.

The Red Devils (1-5) lost for the fifth straight time and finished the D-I regular season 0-4.

From a standpoint of offensive consistency and ball security, it was the Dragons’ best performance of the season: They got season highs of 61 rushing attempts, 68 total plays, 234 yards and they lost just two fumbles - neither of them consequential.

“That’s been our issue all season,” Alvarado said of taking care of the football. “We would either fumble or fail to execute (in the red zone). Now, we have to hit on all cylinders.”

Sablan finished with a team-high 90 yards on 23 carries. Quarterback A.J. Millette scored on a 1-yard sneak to cap Kubasaki’s first possession, a 14-play, 80-yard drive in 6:09. Sablan ran for two-point conversions after each TD.

Gavin McKnight had 70 yards on 17 carries and Millette 72 on 17 attempts. Justin Podzon, David Allison and Ian Lyons each recovered fumbles and Caleb Stefan intercepted a Kinnick pass in the closing seconds.

Wendell Harrison paced the Red Devils with 87 yards on just seven carries. He scored on a 30-yard run on Kinnick’s first possession. Trey Bennett had 19 carries for 64 yards. Kamal Calliste and Joshua Hernandez each recovered fumbles for Kinnick. 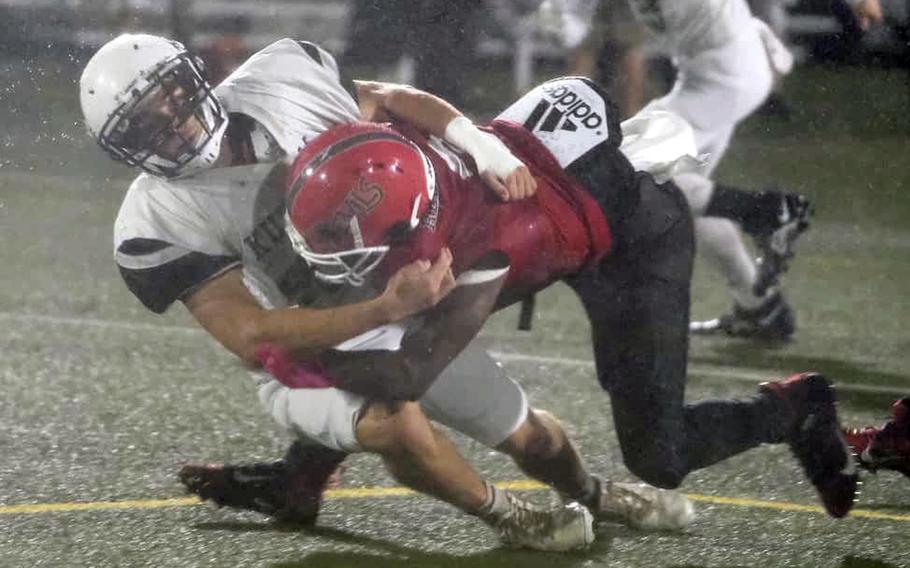 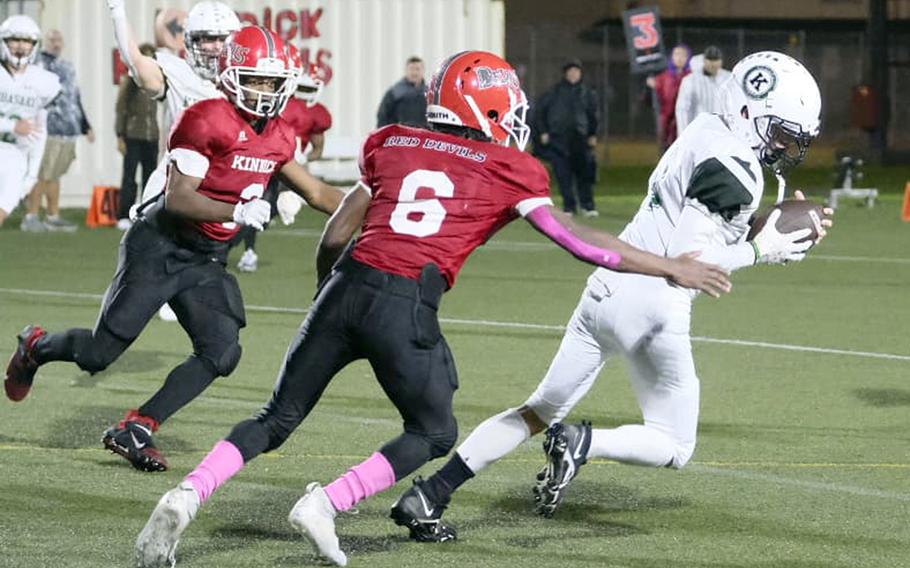 Kubasaki's Caleb Stephan pulls in an interception in the closing seconds in front of Nile C. Kinnick's Trey Bennett and Wendell Harrison. (James Kimber/Special to Stripes) 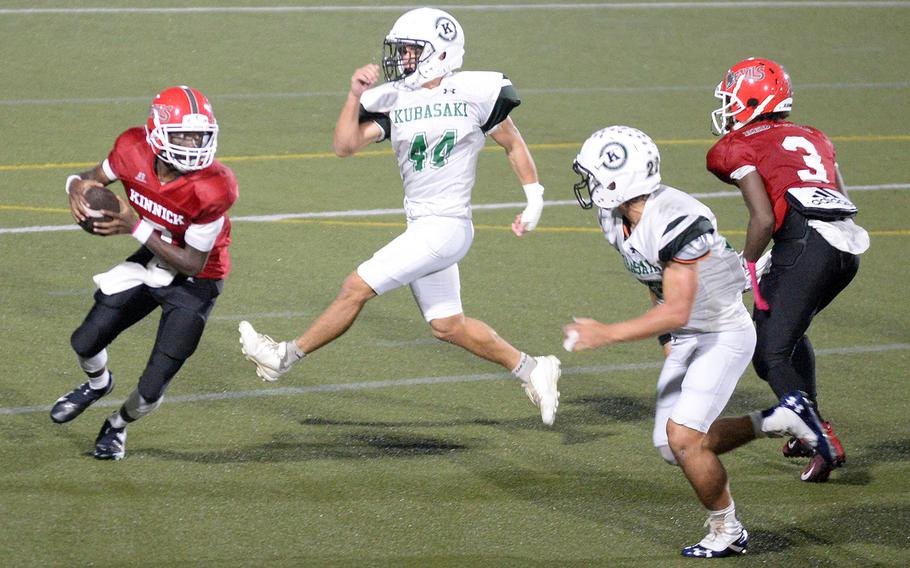 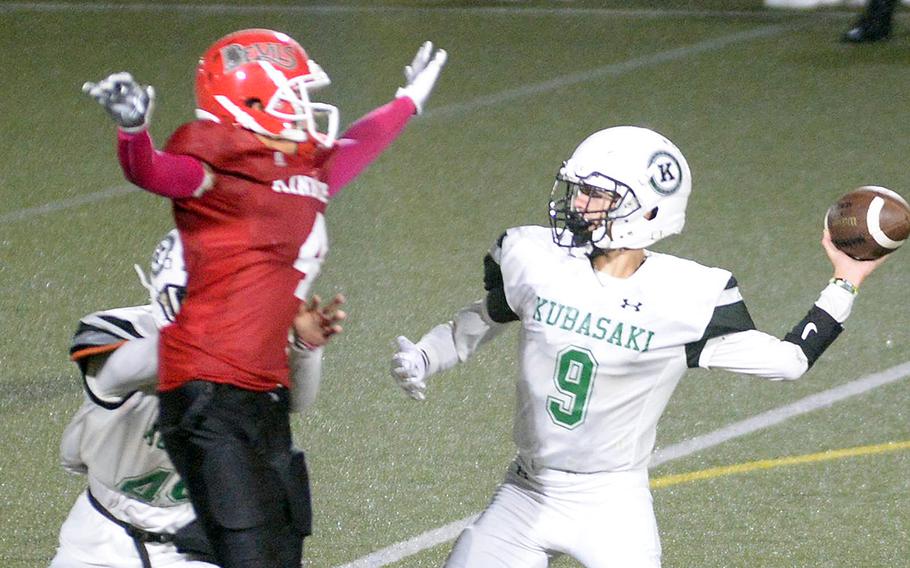 Kubasaki quarterback Caleb Stephan tries to get rid of the ball as Nile C. Kinnick's Vian Barrera homes in. (Dave Ornauer/Stars and Stripes) 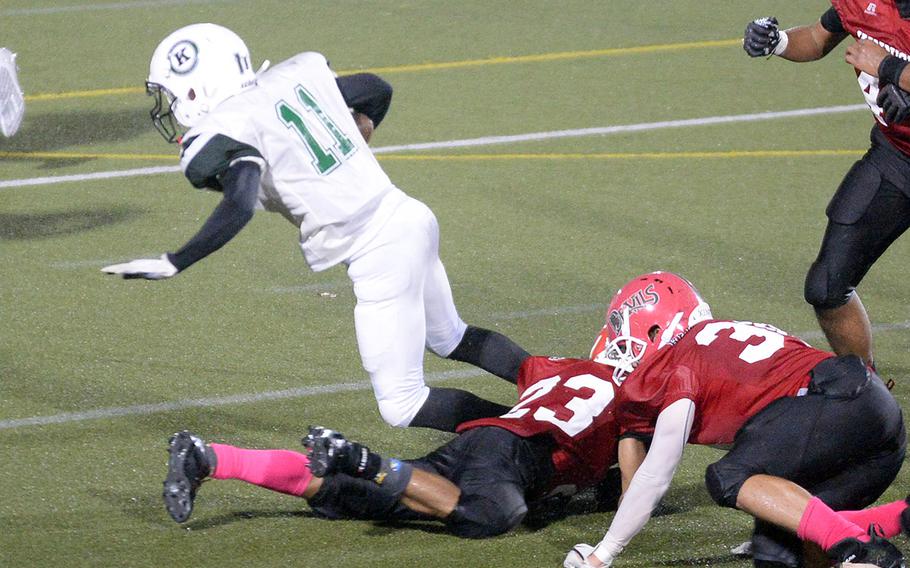 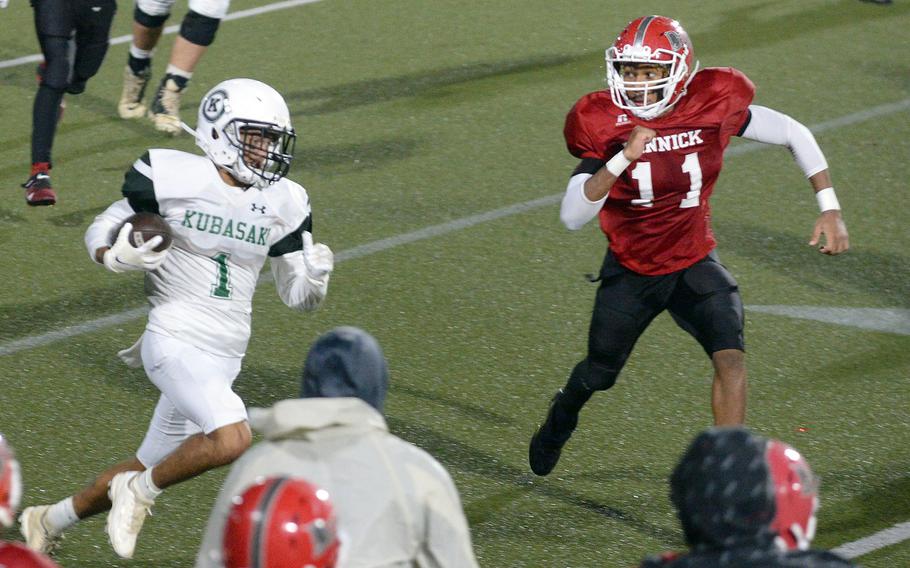 Despite the loss, Kinnick coach Dan Joley said he saw some positives. “We put together a couple of nice drives, we were physical in those drives,” he said. “We just dropped the ball at the wrong time.”

The winner of the semifinal visits Kadena, the regular-season champion, in the D-I title game Oct. 28.

Kubasaki swept the regular-season series with Kinnick and goes for a third victory over the Red Devils next Friday. “We’re looking forward to the rematch,” Alvarado said.

For the Red Devils, Friday’s semifinal presents an opportunity for a clean slate and redemption for their two defeats on Okinawa in September. “Okinawa, here we come,” Joley said. “Hopefully, back-to-back.”