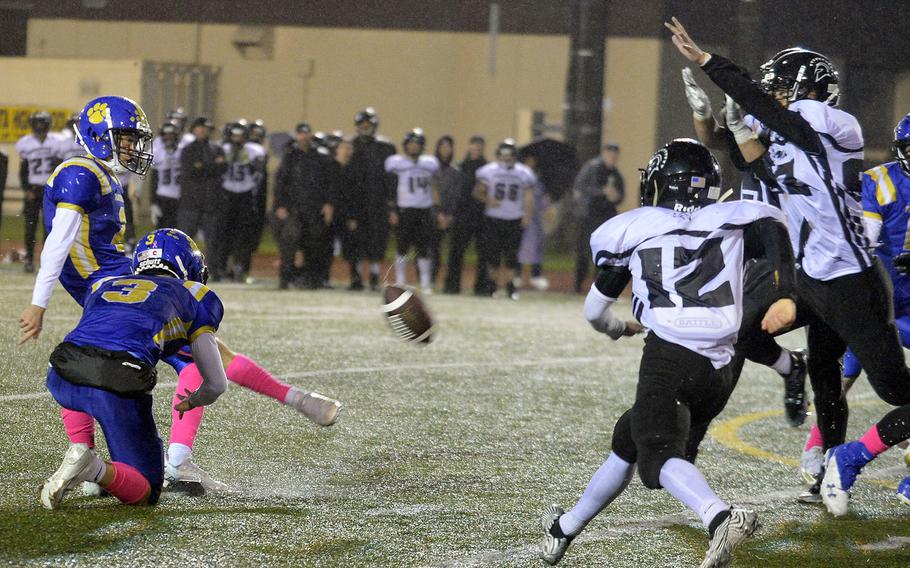 YOKOTA AIR BASE, Japan – At 5-foot-5, Hiroki Davis is one of the smallest players in Zama’s lineup.

But the junior running back-defensive back made the biggest of plays when they were needed most in Friday.

Davis ran for a 5-yard touchdown in the second overtime, then batted away a Yokota two-point conversion pass attempt to preserve a 7-6 win by the Trojans in game-long rain, spoiling the Panthers’ homecoming.

“He gives it to us on all sides of the ball,” said Zama coach Scott Bolin of Davis, who ran 15 times for 50 yards and had three returns for 51 yards to lead all players in total yards. “He’s the poster child for how you don’t have to be the biggest in the fight to be the strongest.”

Davis’ key plays capped what was expected to be a shootout between Japan’s two top scoring offenses, which instead morphed into a defensive struggle – scoreless at the end of four regulation quarters. Zama had been averaging 40.3 points per game and Yokota 26.7. 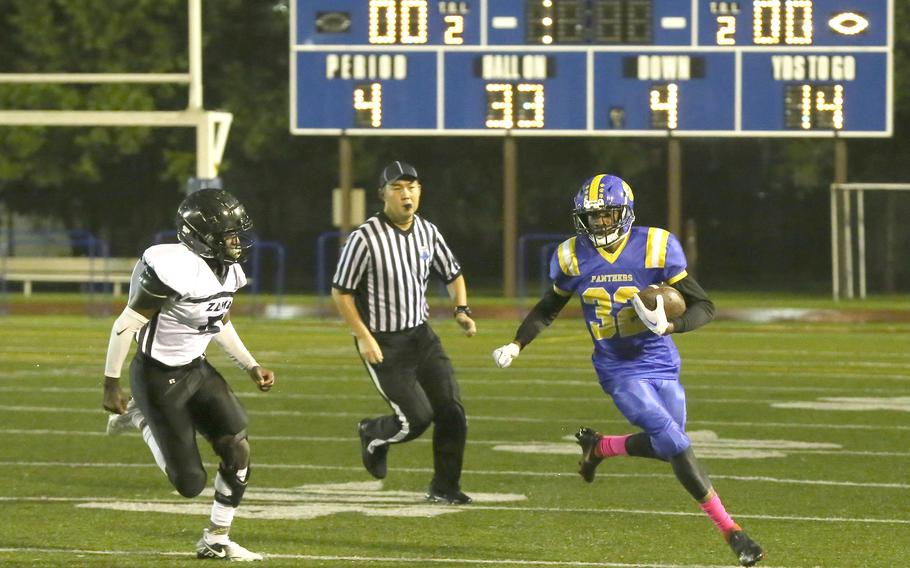 Yokota's DeShawn Bryant returns a punt in the waning moments of regulation time with the score still deadlocked at 0-0. (Greg Holladay/Special to Stripes) 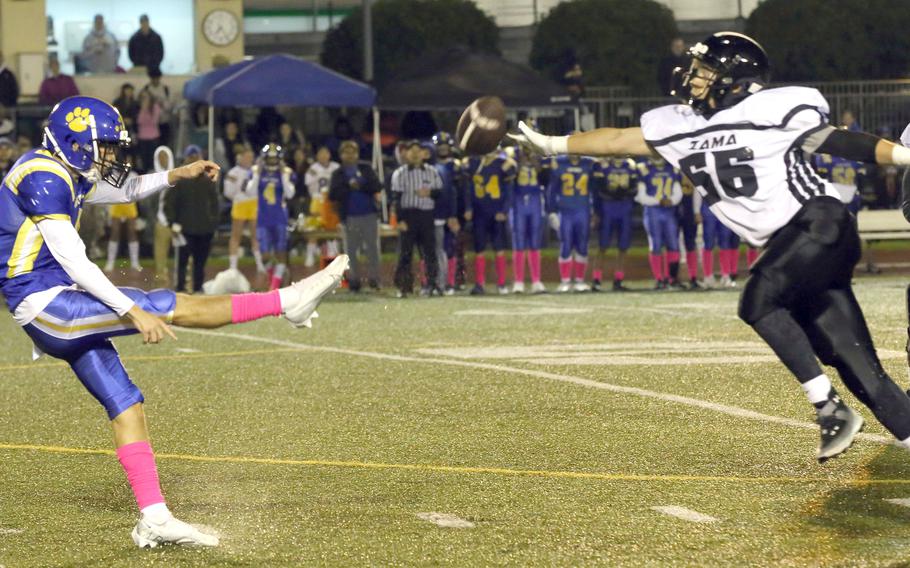 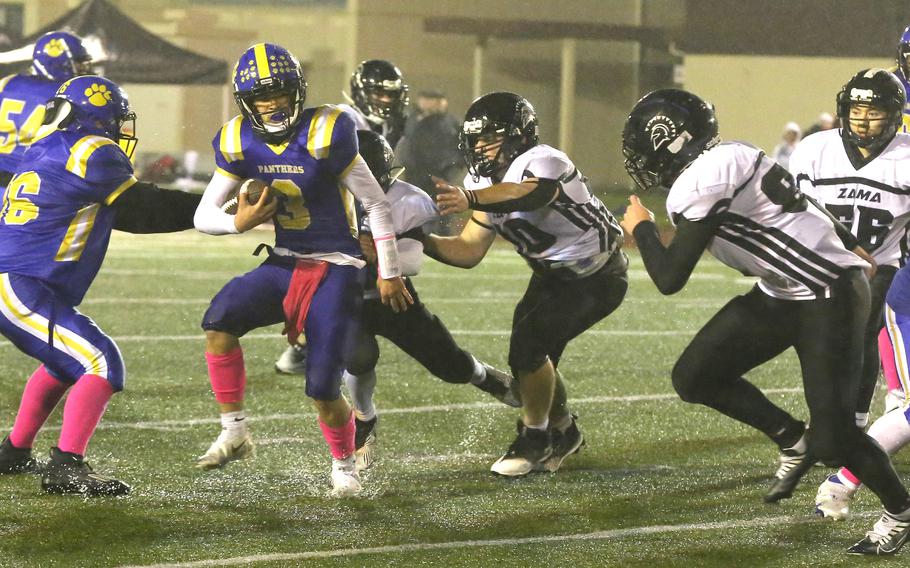 Yokota's Dylan Tomas gets hounded in the backfield by pursuing Zama defenders. (Greg Holladay/Special to Stripes) 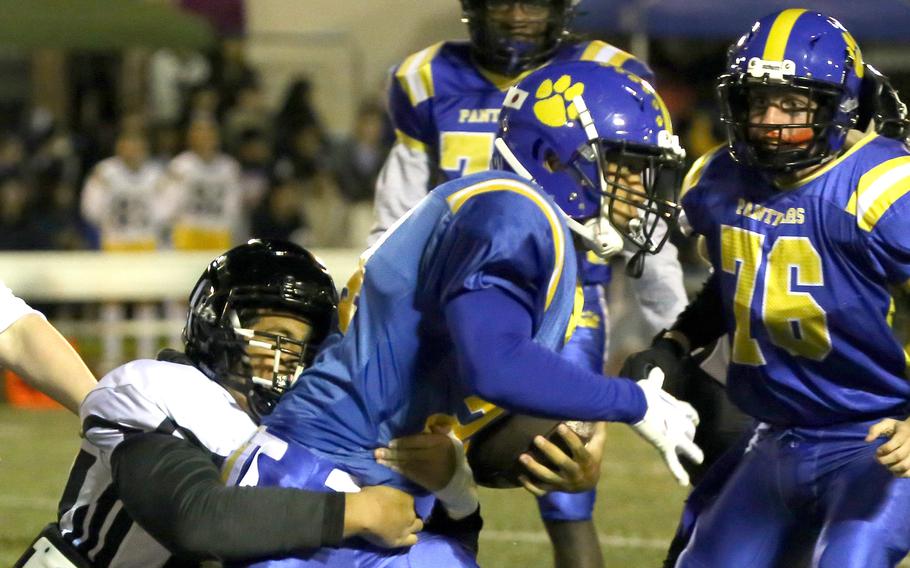 Yokota running back Noah Cruz drags a Zama defender with him. (Greg Holladay/Special to Stripes)

The wet, chilly conditions helped neither side, both Bolin and Yokota coach Michael Woodworth said. The Panthers managed just 95 yards on 41 plays and two first downs, while the Trojans had twice that amount on 48 plays with six first downs.

Zama took the ball first in the initial overtime period and came up short of the end zone when Connor Lape was stuffed by Yokota’s defense at the 1-yard line. Yokota’s Senna Solberg tried a 22-yard field goal, but it was blocked by Zama’s Greg Horton.

On the next play, Davis raced around left end untouched for the go-ahead touchdown and Kaisei Muta added the extra-point kick.

“I saw all my players doing what we needed to do, good clean blocking,” Davis said of the trip around left end into the end zone.

Yokota promptly answered on a 10-yard touchdown pass from Dylan Tomas to Damian Abrams. Cognizant of the blocked field goal try the previous possession, the Panthers opted to go for two points and the win.

Davis then leaped high to bat away Tomas’ two-point pass try. “I had to do it for the team,” Davis said. “They’ve pushed me through all this, so I have to give back.”

“We thought we had the momentum, so we felt we had to go for it (two points) and the win,” Woodworth said. “It’s a tough way to lose a game.”

Pierce Ingram led the Trojans with five catches for 60 yards. Tomas had two drive-stopping interceptions for the Panthers.

It’s the first of two meetings on homecoming Friday for the two teams; they play each other again at Zama on Oct. 21. “We have them again in two weeks; we’ll be ready. That’s football,” Woodworth said.

Zama travels to Matthew C. Perry next Friday; kickoff is at 6 p.m.