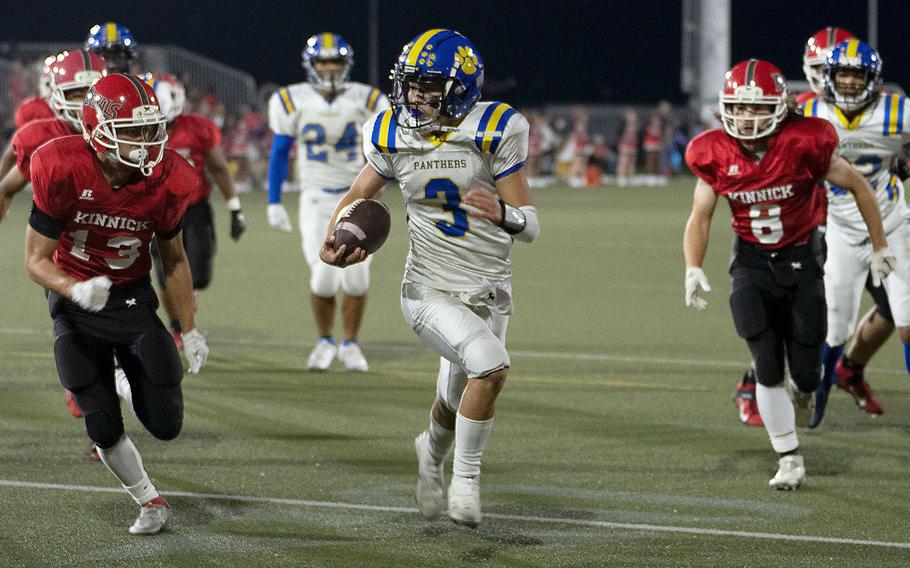 YOKOSUKA NAVAL BASE, Japan – Whether passing or rushing for touchdowns, Dylan Tomas provided the offense. Yokota’s defense did the rest Friday as the Panthers scored a one-point win at Nile C. Kinnick.

Tomas passed for a touchdown and ran for two others, amassing 255 yards of offense, and the Panthers stopped the Red Devils on the goal line in the second quarter and on a two-point try in the fourth to help Yokota come away 21-20 winners. It was Yokota’s first victory over Kinnick since Oct. 9, 2015, when the Panthers beat the Red Devils 62-34.

“That was football right there,” said coach Michael Woodworth, whose Panthers improved to 3-0 on the season and handed the Red Devils their third straight loss. “Those are what you live for as a coach. It was a heckuva team win.”

Tomas, a senior, threw a 10-yard TD pass to Michael Kasten and added two running touchdowns of 20 yards each. It was his first one, in the second quarter, that Woodworth singled out as a key moment for Yokota.

“That run, that was all him,” Woodworth said of Tomas’ spinning, turning, tackle-breaking scoring run. “He was not going to be denied the end zone.”

Red Devils coach Dan Joley was suitably impressed as well. “Their quarterback was fantastic. He was in control,” Joley said.

Though Tomas put up the most yards and accounted for all three Yokota touchdowns, it was not just one player, Woodworth said.

“The offensive line, the defensive line especially, they played lights out,” Woodworth said, crediting defensive coach Rudy Oliveira for “having our boys ready to play.” Kinnick's Trey Bennett pushes through Yokota defenders en route to scoring the first of his two touchdowns in the third quarter of the Red Devils home game against the visiting Panthers Friday. Sept. 30, 2022 at Berkey Field in Yokosuka, Japan. Yokota would hold on to win 21-20. (James Kimber/Special to Stripes) 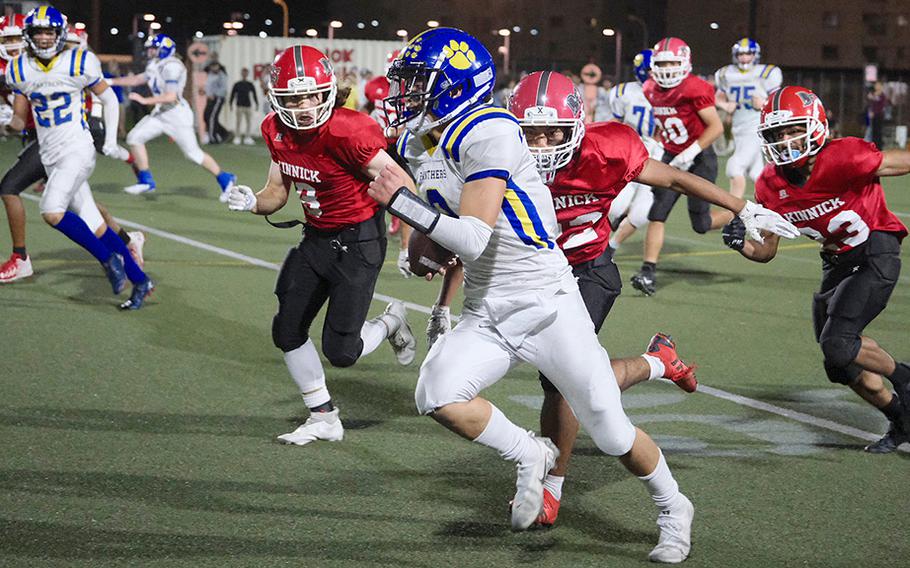 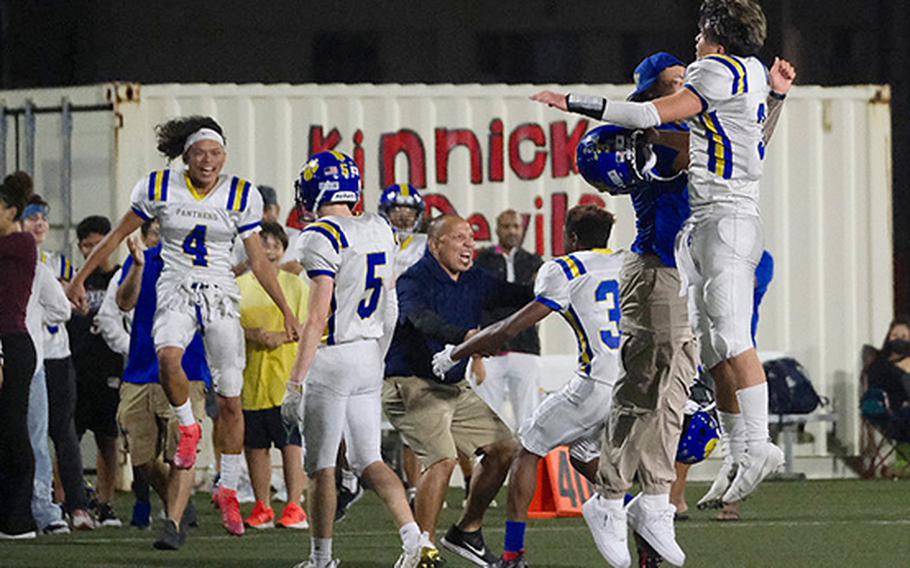 The Yokota Panthers celebrate on the sideline following their 21-20 road victory over the host Kinnick Red Devils on Friday, Sept. 30, 2022. (James Kimber/Special to Stripes) 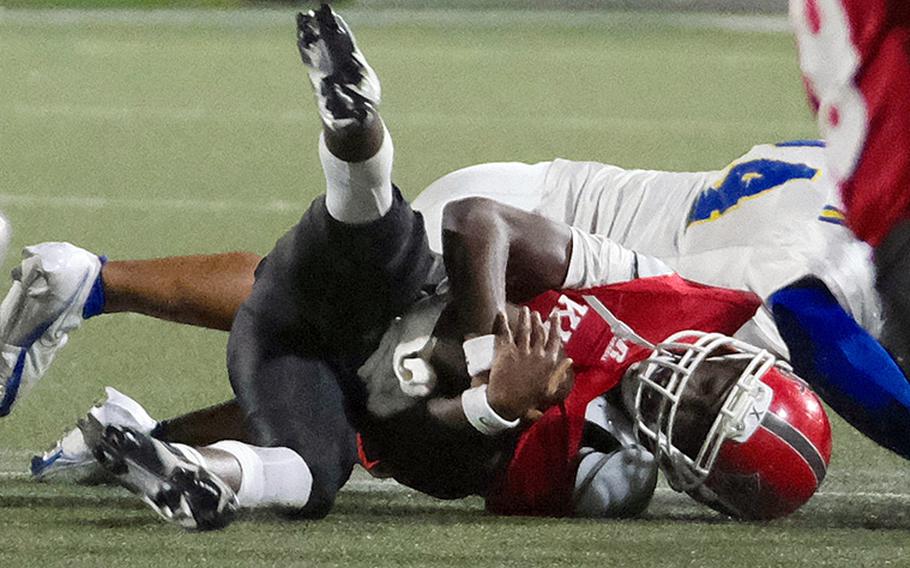 Kinnick quarterback Josiah Chambers is forced to take the sack on 3rd and 18 in the final seconds of the fourth quarter while trying to buy his receivers time to get open for a hail mary Friday, Sept. 30, 2022 at Berkey Field in Yokosuka, Japan. The visiting Yokota Panthers would defeat the host Red Devils 21-20. (James Kimber/Special to Stripes) 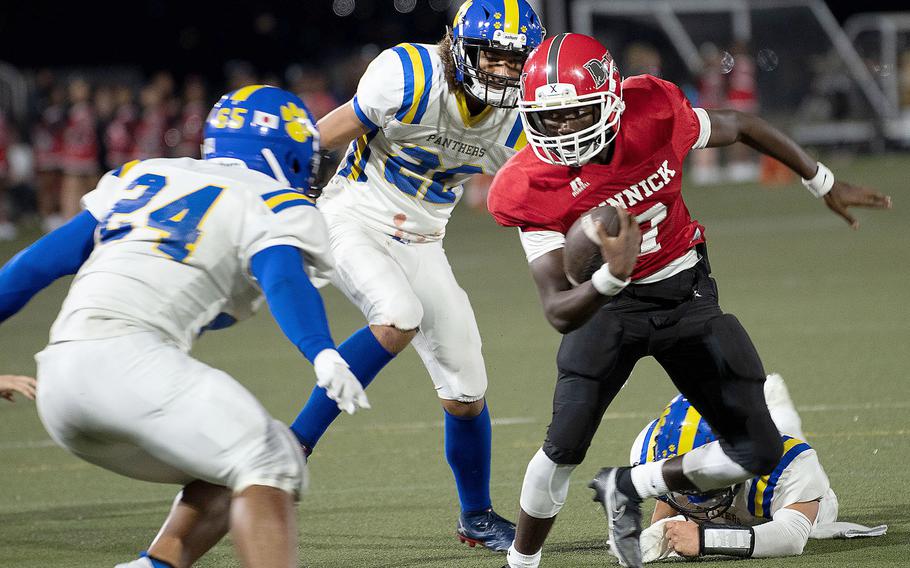 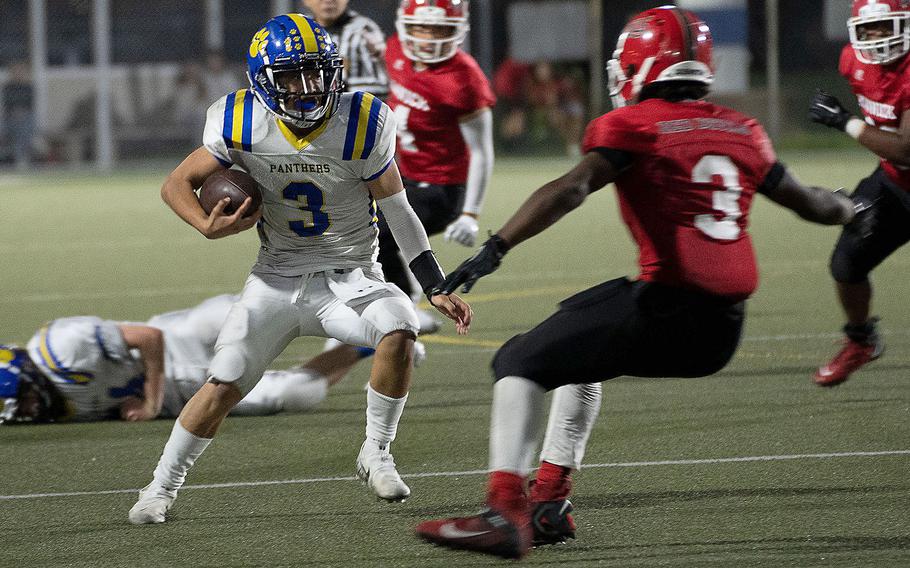 The Panthers led 21-7 at half. Kinnick got its lone points of the half when Yokota lined up for a field-goal try, but had it blocked and returned 84 yards for a Red Devils touchdown by Jared Bojorquiz.

Kinnick’s defense blanked Yokota’s offense in the second half and Trey Bennett got the Red Devils back in it with touchdown runs of 1 and 4 yards. But after the second of those, with 9:45 left, Kinnick’s Kaito DeMoss was stopped on a two-point conversion try. Kinnick got the ball back in the late going but stalled out.

“We put ourselves in a bad position,” Joley said of trailing by 14 at half. “We put the ball on the ground a few times and we threw an interception.”

Kinnick next hosts Kadena in a key Japan Division I battle next Friday; kickoff is at 6 p.m. Yokota entertains Zama on Friday; that kickoff is also at 6 p.m.