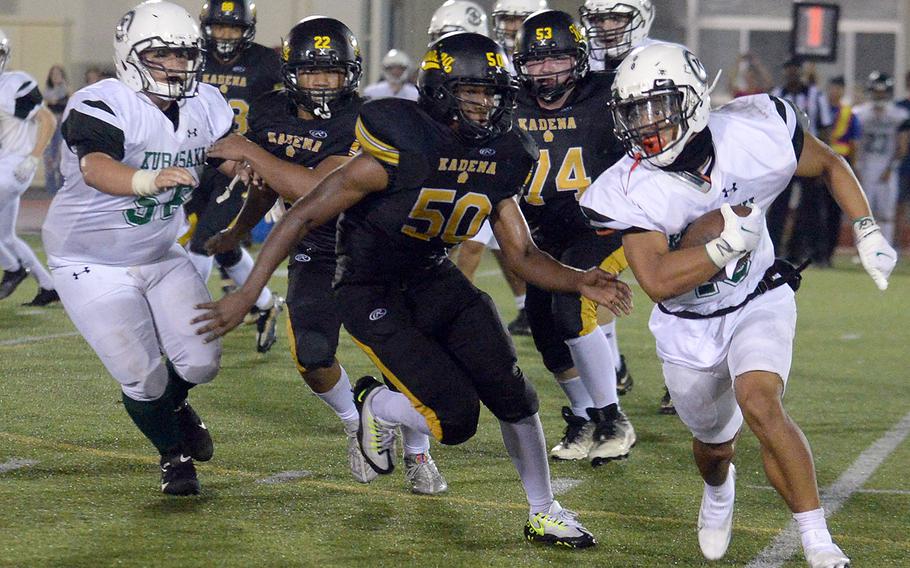 KADENA AIR BASE, Okinawa – A.J. Millette has given Kubasaki’s offense the shot in the arm it needed.

The senior quarterback rushed for a touchdown and passed for another, helping the Dragons beat Kadena 20-13 Friday, spoiling the Panthers homecoming and making the DODEA-Japan Division I football race a wide-open affair.

“We talked this week about playing as a team, one play at a time and not let them (Panthers) dictate the game, and we did,” said coach Tony Alvarado, whose Dragons improved to 2-1 with their second straight win.

Kadena went up 13-0 in the second quarter, then the Dragons scored 20 unanswered points.

But each team is now 2-1 and that makes the Friday Kadena at Nile C. Kinnick game and the Kubasaki at Kinnick game Oct. 14 must-wins for both Okinawa-based teams. Kinnick could have much to say about the outcome; if the Red Devils win both games, all three finish 2-2.

“Hopefully, we can punch our ticket with a win at Kinnick,” Alvarado said.

The second-place team hosts the third-place team on Oct. 21, with the winner to play at the regular-season champion on Oct. 28.

“Now, we have to decide who we are as a team,” said coach Sergio Mendoza, whose Panthers could have clinched the top seed with a victory on Friday. “What a wonderful opportunity (we have) to learn from this experience. If we don’t learn from it, that would be our biggest loss.” 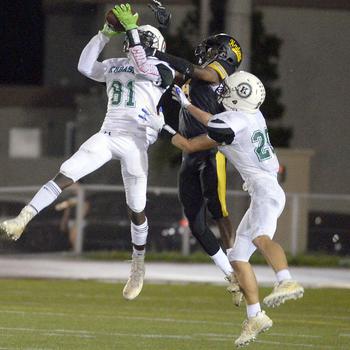 Kubasaki's Malachi Pinkston and Kadena's Kai Christy can't quite find the handle on the ball. (Dave Ornauer/Stars and Stripes)

Cameron Wilson threw a 36-yard scoring pass to Javonte Vickers with 2:15 left in the first quarter for Kadena, which extended the lead to 13-0 on Jeremiah Drummer’s 1-yard run with 7:22 left in the first half.

The Dragons answered promptly, with Gavin McKnight running 6 yards for a touchdown, cutting the gap to 13-6. Four plays and a muffed Kadena punt later, Millette sneaked in from 5 yards out. Aiden Sablan added a two-point conversion run to put Kubasaki ahead to stay 4:08 before half.

Each team had plenty of chances in the second half, but only the Dragons could cash in, with Millette throwing a 14-yard scoring pass to Malachi Pinkston with 1:18 left in the third quarter.

From there, Kadena drove as far as the Kubasaki 24 but stalled with 6:11 left. The Panthers got the ball back once more with just under two minutes remaining, but Wilson was intercepted by Kaito Moore with just under a minute left, and the Dragons ran out the clock.

Penalties and turnovers hurt the Panthers; they fumbled twice and threw two interceptions, and were penalized 12 times for 98 yards.

Homecoming, and its related distractions, were partly to blame for the defeat, Mendoza said, but so, too, was not giving it all in practice during the week.

“You can’t cheat the grind, and we didn’t grind this week,” Mendoza said. “When your mind is elsewhere, it certainly comes out on the football field.”

Kadena’s game on Friday at Kinnick kicks off at 6 p.m. Kubasaki next hosts American School In Japan on Friday; kickoff is at 6 p.m. as well.