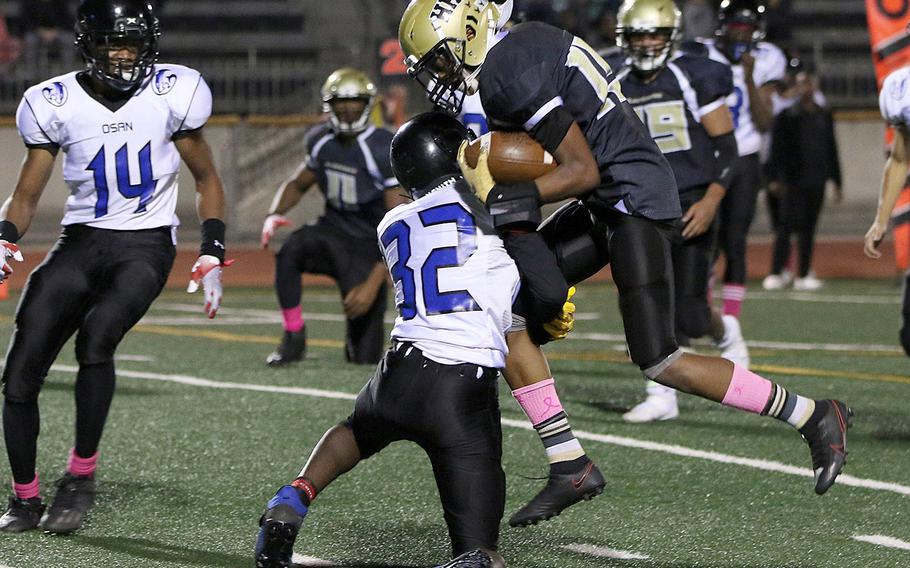 Humphreys has had plenty of preparation as well as their inherent enrollment edge over Friday’s DODEA-Korea season-opening opponent Osan.

The Cougars? They’ve had one eight-man scrimmage with a Korean high school team. Their offensive line is outweighed by Humphreys’ by an average of nearly 80 pounds.

But while it may appear the Blackhawks have all the advantages, don’t tell that to either coach. Friday’s game, the Cougars’ homecoming with a 6 p.m. kickoff, still has to be played on the field.

And there, Humphreys coach Steven Elliott and Osan coach Jerome Learman said, anything can happen despite what appears on paper.

“That’s how upsets happen,” Elliott said of taking an opponent for granted. “I never look past any opponent. This week is the Osan Cougars and that’s what we’re focused on. We focus on week to week, opponent to opponent and once that’s over, we get ready for the next one.”

And like a football David going up against gridiron Goliath, Learman said he knows that if Humphreys wins, they’re supposed to, and if Osan wins, they can take pride in being giant killers.

“The advantage for us is, we have nothing to lose,” Learman said.

Both teams bring a wealth of skills-position experience to the table.

The Cougars line up with junior Eddie Kim and senior A.J. Panboon in the backfield, seniors Adam Rutland and Jaylon Grant at receiver. 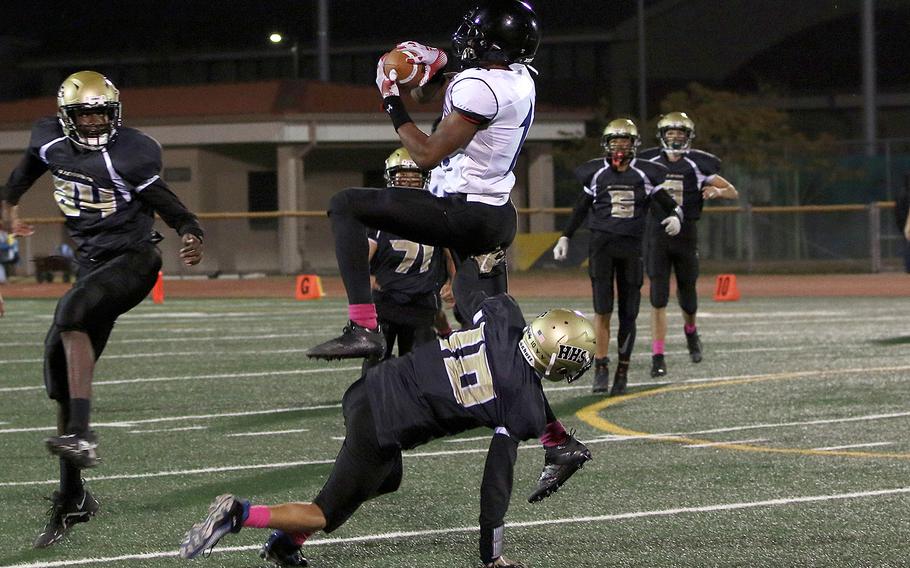 Senior Jaylon Grant, interceptiing the ball, is one of a handful of experienced skills positions players for Osan. (Jessica McCollum/Special to Stripes)

Veal, who rushed for 530 yards against Osan in last year’s season finale, “is ready,” Elliott said. “He’s itching. Any time he smells a game, he’s ready to run. We’re excited to see what he’s going to do.”

In Humphreys’ 41-21 win Sept. 3 over the Seoul Rhinos and their 21-18 win Saturday over Dankook University, Veal rushed 18 times for 166 yards and caught a touchdown pass, while Cook was 19-for-29 for 414 yards and three touchdowns passing.

“We weren’t supposed to be victorious, but we were,” Elliott said. “This team will give you four solid quarters, whistle-to-whistle.”

Learman’s main concern is how the Cougars can handle the Blackhawks line. “We average 150 and they’re probably averaging 230. Other than that, I feel good about my kids. We’ll do what we can.”

Elsewhere in the Pacific, Kadena hosts Kubasaki at 6:30 p.m. Friday, and a victory for the Panthers could put them in command of host rights to the DODEA-Japan Division I football final on Oct. 28.