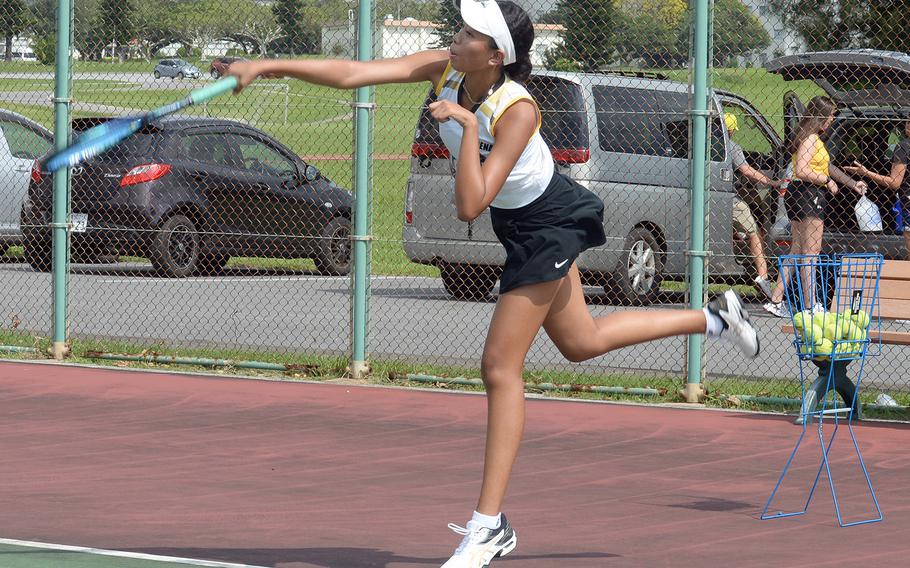 CAMP FOSTER, Okinawa – Kubasaki will have its full cadre of hitters back in place for the new Okinawa volleyball season.

It’s replacing the Dragons’ setter and captain of the last two years, Alyssa Alvarado, that looms as the big issue.

Into that fray steps Grace Berrens, a sophomore who saw some action as a setter in 2021 and is set to take over starting with the Dragons’ first regular season meet against Kadena on Sept. 15.

“We were lucky enough to get Grace some sets last year,” second-year head coach Kent Grubbs said. “It’s going to take a lot of work, but she’s up for it.”

Berrens has no shortage of weapons to set to. Senior middle blockers Sophia Grubbs and Emma Leggio and senior outside hitter Risha McGriff return, as does Alvarado’s sister, Annabelle, a sophomore defensive specialist and outside hitter.

Continuity has been a hallmark of Dragons volleyball, Grubbs said. Six of his players, including four starters, have been at Kubasaki for all four high school years.

“It’s very odd, having four girls who started as freshmen and are still here,” said Grubbs. Counting his years as a student in the Panama Canal Zone, Grubbs has been with DODEA in one capacity or another for 40 years, the last nine with Kubasaki as either an assistant or head coach. Senior Risha McGriff is one of six Kubasaki volleyball players, four of them starters, who've spent all four of their high school years in Dragons uniform. (Dave Ornauer/Stars and Stripes)

So, is Berrens feeling any pressure to steer the Dragons’ attack.

“A little bit,” Berrens said, adding that she wants to make her own way at Kubasaki and not try to fill anyone’s shoes. “I’ll try my best.”

In addition to traveling to the American School In Japan’s YUJO tournament Oct. 20-22, Kubasaki is also hosting the end-of-season DODEA All-Japan tournament slated for Oct. 27-29.

That’s much more variety than in 2021, when the Dragons faced Kadena 14 times. Kubasaki has won the district championship every year since 2003.

Trying to end that long string for Kadena are juniors Morgan Sayers and Deniz Dussetschleger and seniors Bre Castillo and Juna Martin, each back from the 2021 team. Ashley Moreno takes over as head coach. 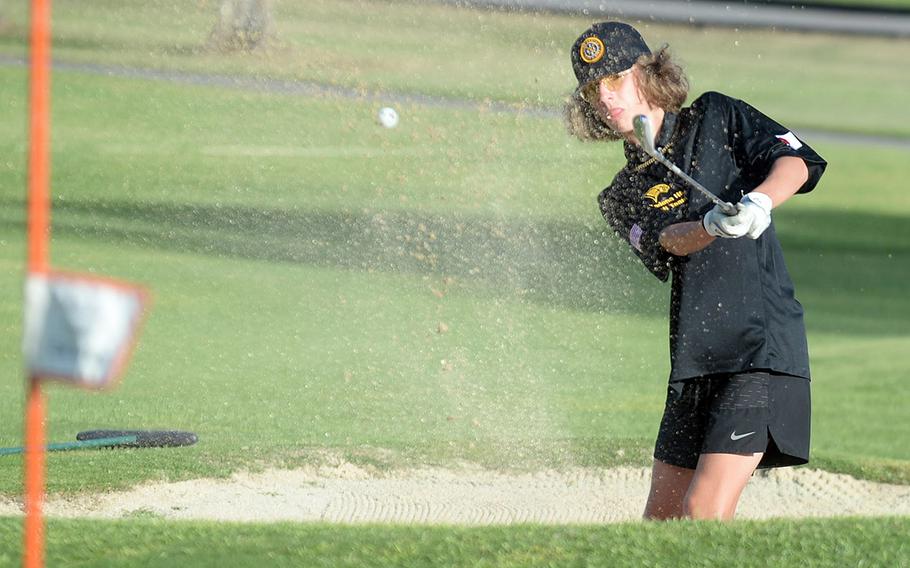 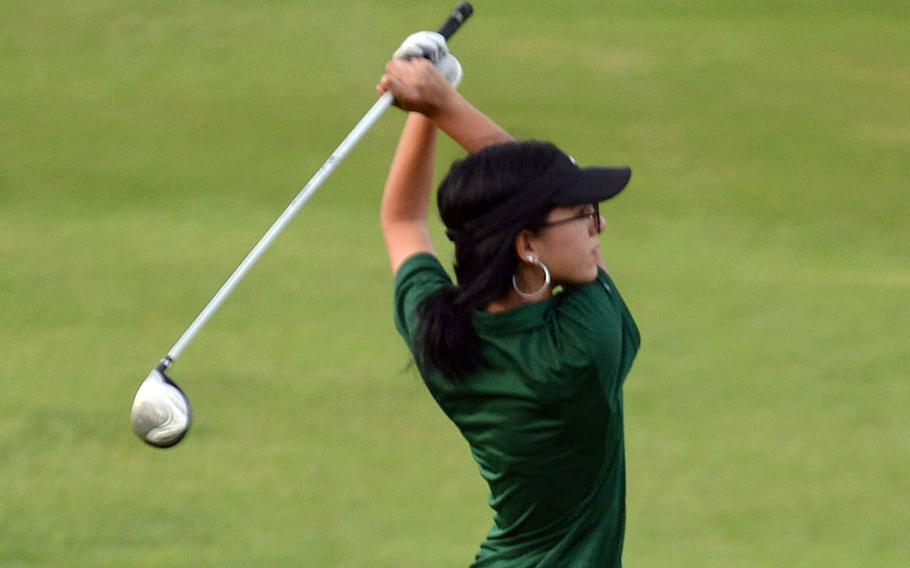 From all indications, Kubasaki’s and Kadena’s boys squads are strong.

Carter Johnson, a senior, returns for the Panthers; he won the island title in a four-hole playoff Oct. 15. He’s joined by junior Kento Rathbone and newcomers Noah Williams, Sebastian Portillo and Sebastian Dorelien.

While the Panthers girls team is as strong as it’s been in while, junior Julizka Aguirre of Kubasaki is the reigning island champion and, on paper, is favored to make it back-to-back titles.

Kadena returns senior Teiya Sheperd-Savage, who lost out to Aguirre in a one-hole playoff for the island championships last year, and senior Caroline Trowbridge. It’s the last go-round for Karise Johnson, the Kadena senior who placed first and second the last two years running in the Far East virtual Division I finals. On her heels, again, should be Kubasaki junior Makayla Saeteurn, who placed third in last year’s D-I.

The Panthers are senior laden, with Joseph Dluzeski and Eamon Challinor for the boys and Jolyn Botes joining Johnson in the girls lineup. Kadena has mostly new runners and it’ll take some work, but coach Abe Summers feels his team can be the equal of or better than last year’s.

Joseph O’Connor takes over at Kubasaki; he coached at Seoul American in its final years. Saeteurn is joined by veteran juniors David Franco and Gideon Dawson and newcomer Joachim Killian, also a junior.

Kadena and Kubasaki cross country, too, will get a trip off-island, the first since the 2019 Far East meet. Both schools were invited to run in the DODEA-Japan finals Oct. 15 at Tama Hills Recreation Center. They also run the Far East virtual Division I meet Oct. 24-25. Senior Evan Davis of Kadena is one half of last year's Okinawa district doubles champion team. (Dave Ornauer/Stars and Stripes) 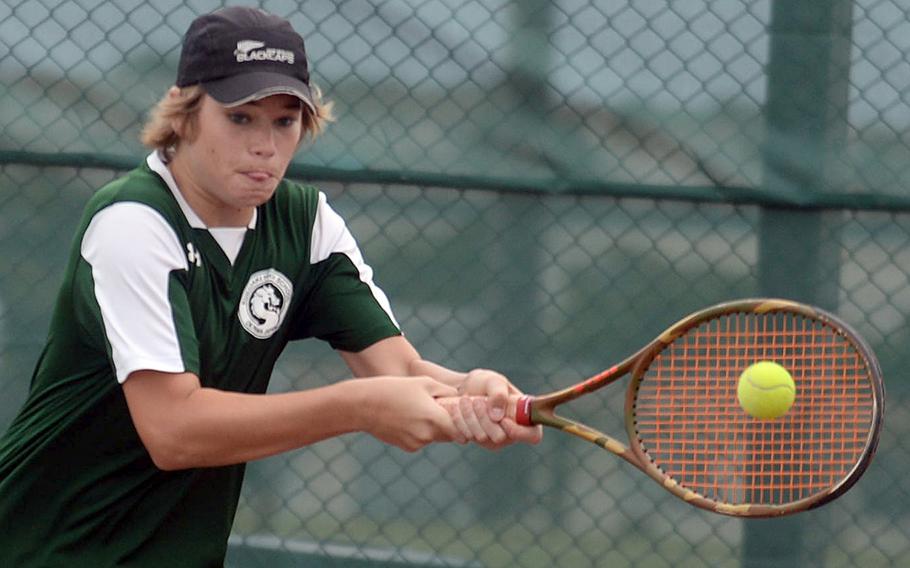 The Dragons and Panthers tennis teams will also travel off island for the first time since 2018. It’s there that they will play in the DODEA-Japan finals Oct. 27-29 at Marine Corps Air Station Iwakuni.

Three individuals with the Ryan surname headline Kadena, Shawn as the new head coach, his freshman son Steven in the boys lineup and defending island singles champion, senior Christine Ryan, as the girls No. 1 seed.

The Dragons look to be reloading under new coach Chere’ Smith. Sophomore Jacy Fisk returns along with junior Owen Ruksc for the boys and juniors Ella Perez and Noemi Ung for the girls. Junior Josh Wall is new to the boys lineup and junior Jessica Blackston for the girls.