They played on opposite sides of the net last year, Liz Johnson for Robert D. Edgren, Madylyn O'Neill for E.J. King. Now, the sophomores are playing on the same side as members of the Cobras. (Dave Ornauer/Stars and Stripes)

SASEBO NAVAL BASE, Japan – E.J. King’s volleyball team won one and lost one before the season even began.

But a monkey wrench got tossed into the engine earlier this summer – Ysa Pyryt, who had been expected to return at setter, is leaving unexpectedly, a sudden change of orders for Pensacola, Fla.

“She was a big part of the team,” Johnson said of Pyryt. “But there’s enough people who can step up and do what she did.”

It could be senior captain Aileen FitzGerald. Or junior Maliwan Schinker, returning from last year’s 18-3 team. Or it could be one of the Mapa sisters, junior Katelyn or sophomore Kylee.

“Any one of them can set as well as hit,” coach Ricky Andrew said. “So, whoever the ball comes to can set. We’re doing that now.”

As for the newcomer Johnson, coach and teammates say she’s fitting in well. “She brings a new energy” to the team, O’Neill said. “She’s really pushing everyone to do the best they can.”

Pyryt, whose family departed Sasebo on Aug. 17, said she was “really sad” about leaving the team, “but at the same time, I’m happy for them. There’s all these other girls with so much potential. I have trust in them and I know they’ll do well this season.” 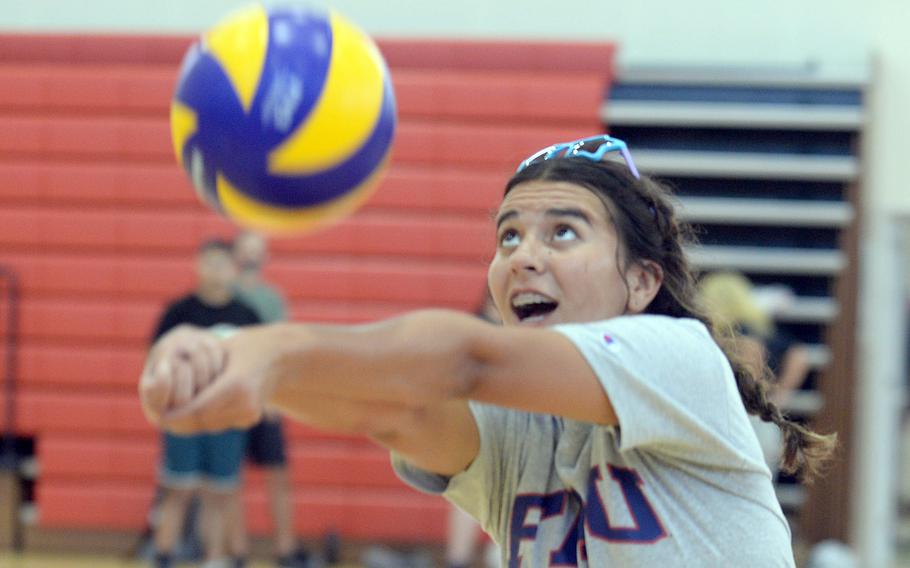 Madalynn Medina is one of eight seniors on an upperclass-heavy Matthew C. Perry volleyball team. Medina moves up from last year's JV. (Dave Ornauer/Stars and Stripes) 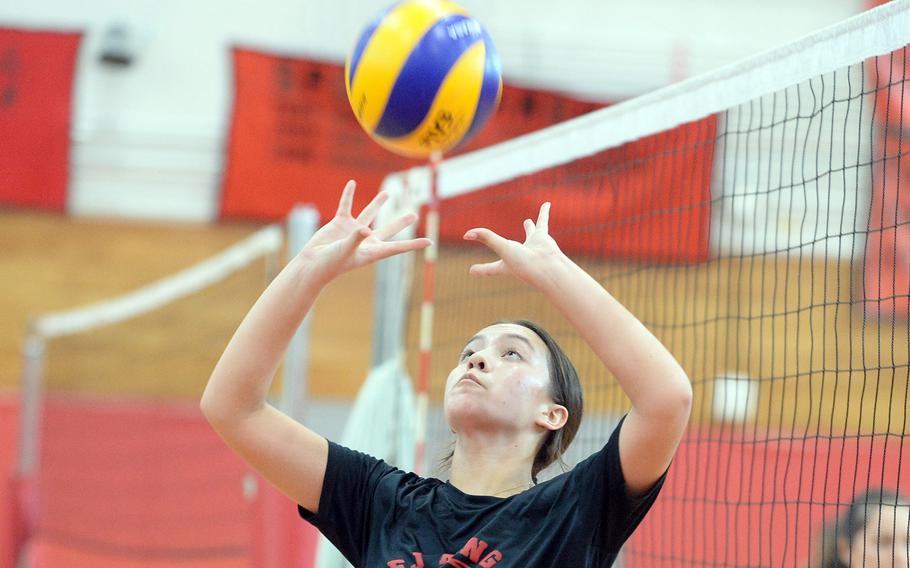 Junior Maliwan Schinker is one of several holdovers for E.J. King's volleyball team who could replace departed setter Ysa Pyryt, who transferred stateside on Aug. 16. (Dave Ornauer/Stars and Stripes) 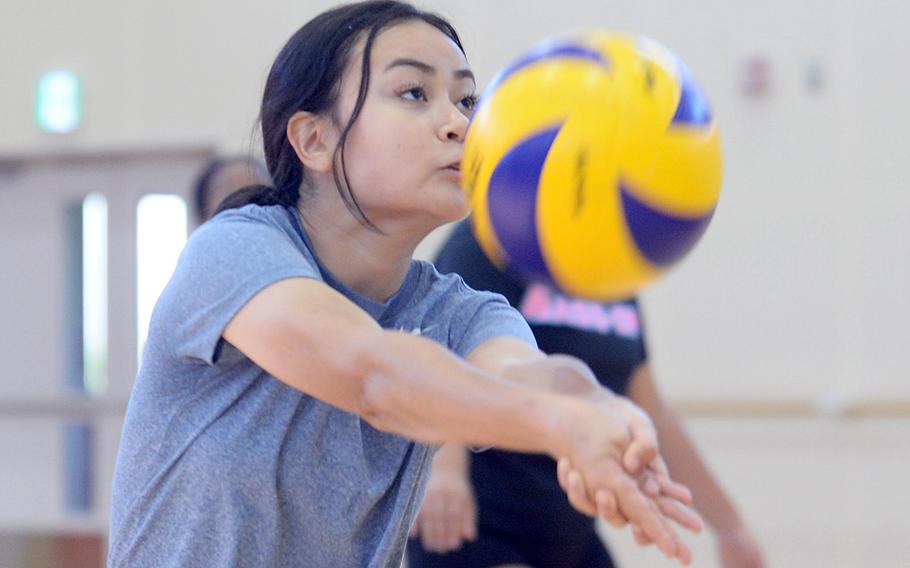 Haleigh Quinn is one of eight seniors on an upperclass-laden Matthew C. Perry volleyball team. (Dave Ornauer/Stars and Stripes) 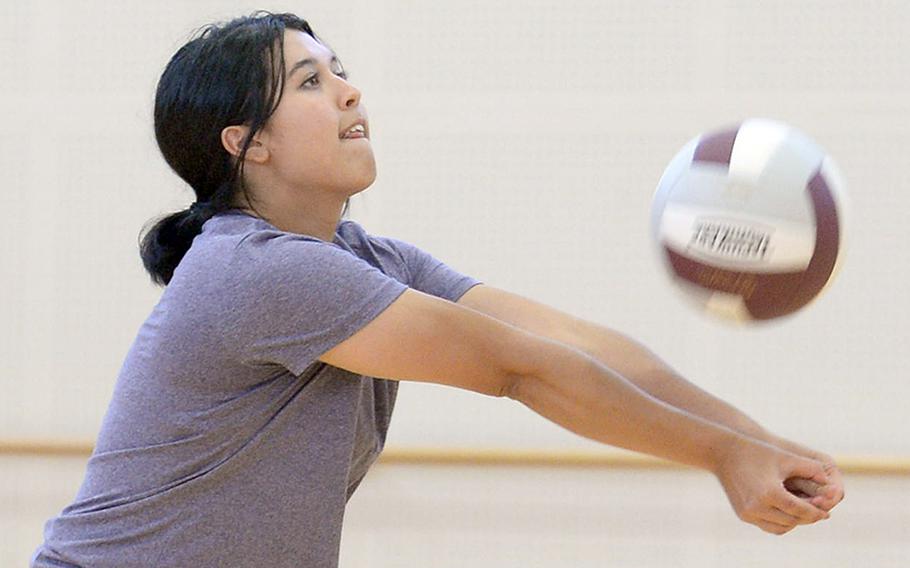 Jessica Griffin is one of eight seniors on an upperclass-laden Matthew C. Perry volleyball team. (Dave Ornauer/Stars and Stripes) 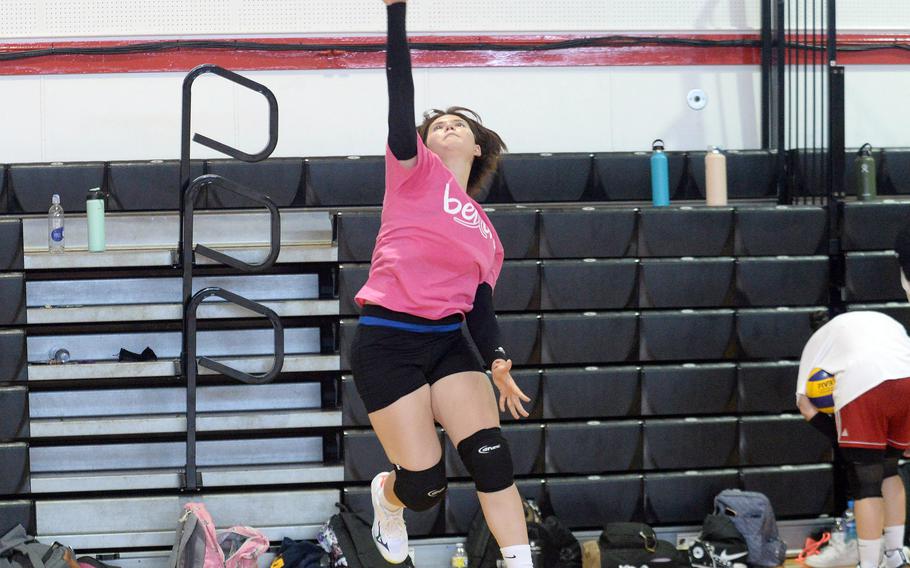 Senior Remi Sherratt has recovered from a left knee injury and surgery and is back in the Zama volleyball lineup as a setter. (Dave Ornauer/Stars and Stripes)

An old Misawa Air Base youth teammate of Johnson’s, Zama’s Remi Sherratt, is fully recovered from left knee surgery and is back along with nine other Trojans returners, including junior Kierstyn Aumua and sisters Emma and Nina Sakamoto-Flack.

With eight seniors and two juniors on the roster this season, the Samurai say they’re hopeful they can at least hold their own after going winless a season ago. “We will definitely be competitive this year,” said returning coach Patricia Swiderski. Miu Best is one half of E.J. King's twin-sister tennis duo. (Dave Ornauer/Stars and Stripes) Moa Best is one half of E.J. King's twin-sister tennis duo. (Dave Ornauer/Stars and Stripes) 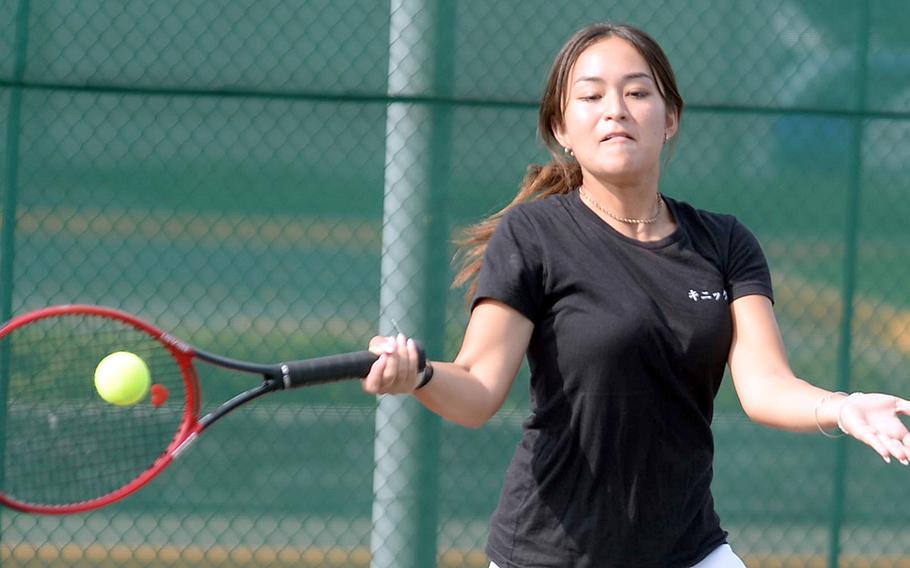 Senior Emily Paul is one of five players who could be the No. 1 girls seed on Nile C. Kinnick's tennis team. (Dave Ornauer/Stars and Stripes) 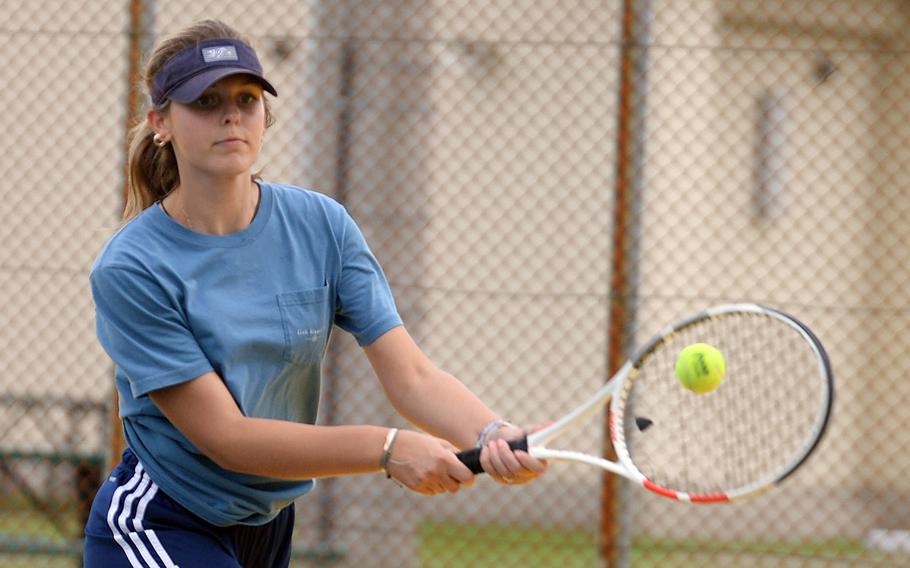 “The boys team is not so strong, but they’re capable of being competitive in time,” Best said. “The other two girls can contribute.”

The Red Devils may have their strongest girls team in years; coach Nico Hindie says any one of his top five girls, led by senior Emily Paul, could be Kinnick’s No. 1. Senior Joshua Yang and junior Luis Galloway are in their third seasons for the Devils.

Zama’s girls team is also starting over, but the boys return a veteran core of Gabriel Rayos, Kai Fredendall and Max Brodsky. The Trojans graduated all four of their girls and boys No. 1 Liam Hunter.

Yokota’s boys No. 1 could come down to senior Zeman Davis and junior Tommy Vogeley. The Panthers girls are all young, mostly first-time players, save for junior Julia Morioka. Tyler Gaines won Far East Division II virtual cross country individual race as a member of E.J. King two years ago as a freshman. He then spent last school year in Fort Myers, Fla., then returned to Japan for this season, only at Matthew C. Perry. (Dave Ornauer/Stars and Stripes) 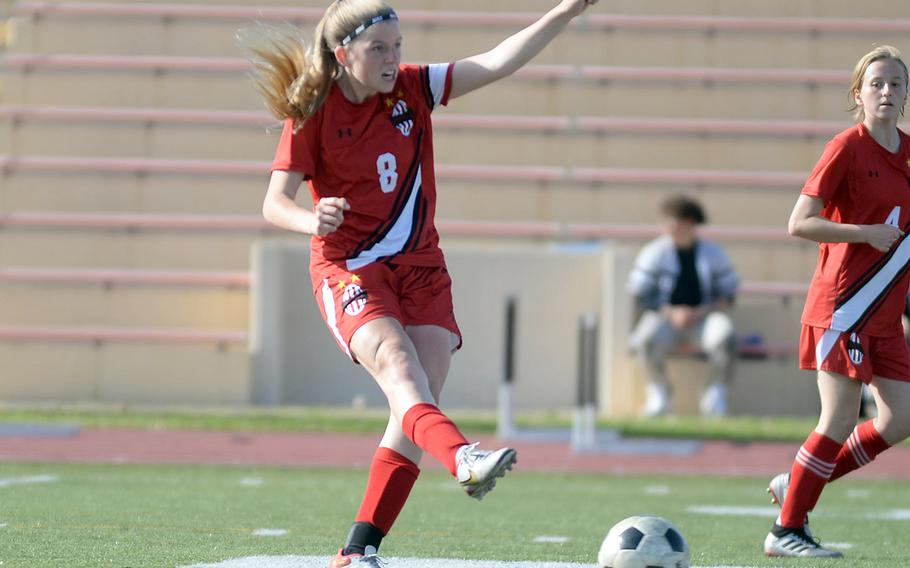 An old face from two seasons ago returns in a new uniform – Tyler Gaines, who as an E.J. King freshman won the Division II portion of the Far East virtual cross country meet in 2020 then spent a year at Fort Myers, Fla., is back in Japan with family and has transferred to Perry.

“I definitely got a little humbled after I left here,” Gaines said of running in Florida. “And the courses there were insane.”

Just four runners return for Kinnick, with Soul Vessels, a junior, the lone boy; he was fifth in last October’s Far East Division I virtual meet. Sophomore Mia Bartram also returns; she took fifth in Far East Division I as well, and coach Luke Voth says her times should improve.

Yokota is in rebuild mode as well. Senior Hazel Gray and her sophomore brother Atticus return, along with sophomore Richard Scheffler. Longtime coach Dan Galvin has stepped aside; Sam Heino is replacing him.