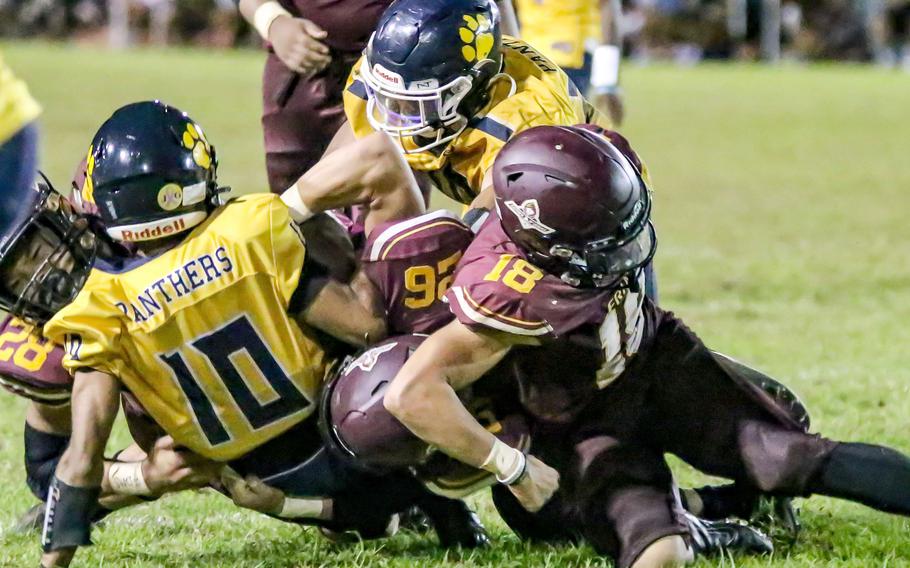 Guam High's football season has been pushed back to the spring due to equipment issues that wouldn't permit a fall season to start on time, Guam public school officials said. (Donna Rhodes/Special to Stripes)

URUMA, Okinawa – Due to problems acquiring equipment in time for a first-quarter fall season, Guam’s high school football season has been pushed back to spring, according to Guam public school officials.

“Unfortunately, due to equipment issues, we had to push football back,” said Marvin L. Linder, athletics director for the public-school Interscholastic Sports Association, which oversees football on Guam. “Next school year, it will return to the fall.”

Although a member of Guam’s private-school circuit, the Independent Interscholastic Athletic Association of Guam, Guam High plays football in the ISA because IIAAG only has one other football-playing school, Father Duenas Memorial.

Guam High’s longtime football coach Jacob Dowdell expressed disappointment with the decision, primarily because a spring season start would be past the Feb. 1 national signing day. Guam sends anywhere from five to 10 players to stateside colleges each year. Many college coaches put a lot of weight on players’ senior seasons when evaluating potential recruits.

“We will miss all the signing windows for football scholarships,” Dowdell said. “We’ll be playing through spring break and well after any signing day.”

The decision was made to move football “so at least we will have a season,” Linder said.

New equipment was ordered by the Guam Department of Education in January, Linder said. The football gear manufacturer Riddell “informed ISA that the equipment won’t be shipped out until September,” Linder said. No definite date was given, he said.

“We have three high schools that don’t have enough equipment to safely return to football and that’s why we had to move football,” Linder said.

He acknowledged that a spring start would mean the national signing period would already be over, “but we want full participation in our high school athletes,” Linder said. “Next school year, we will be back to the fall season.”

The ISA season is scheduled to start March 27 and end on May 20. The first day of practice is scheduled for Feb. 13, according the schedule released Friday by GDOE.

Other sports have been shifted around due to the decision. Rugby and tennis have moved to the second quarter, Oct. 21-Dec. 17; wrestling will take place in the first quarter, Aug. 26-Oct. 20; track and field moves to the third quarter, Jan. 23-March 18.