The Red Devils don’t have a track. They ran on Yokosuka Naval Base sidewalks. They don’t have throw, jump or hurdle areas, so they simulated those events in a dirt pit and a patch of grass near campus. They only practiced a few times at a Japanese track off base.

Yet, the Red Devils prevailed in the Division I boys, girls and overall team standings at the DODEA-Pacific Far East virtual meet, led by a cadre of multiple winners in all disciplines.

“Two of our four guiding principles are fortitude and enterprising spirit,” Voth said. “I think our team did a good job of exemplifying those qualities and finding a way to make it work despite the limitations.” 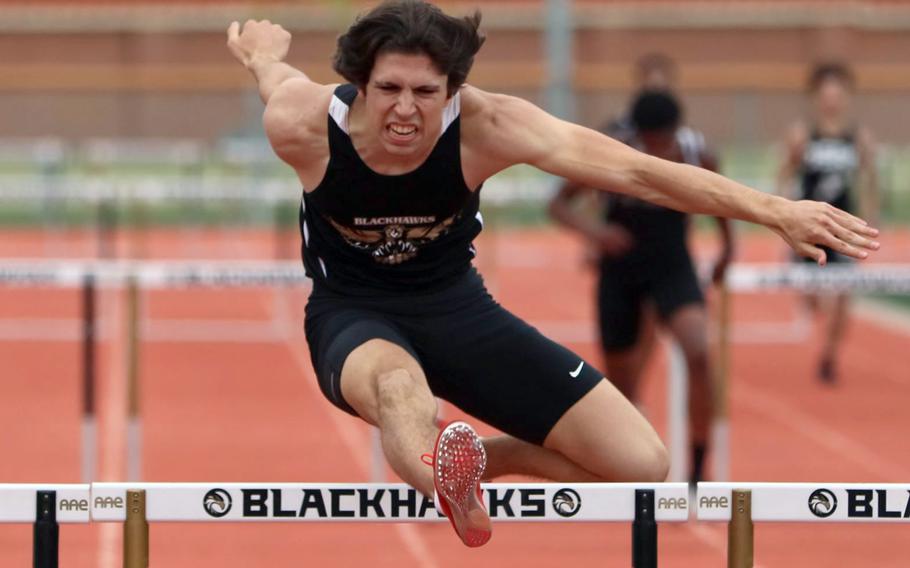 Isaac Robinison kept Humphreys' boys in the Division I hunt by sweeping the 110 and 300 hurdles. (Brian K. McCollum/Special to Str)

“We had a well-rounded team,” Panthers coach Dan Galvin said. “We were competing in every event. Only 10 girls, but they all scored points for us.”

The Far East meet was run virtually for the second straight year due to the coronavirus pandemic and its resulting travel restrictions, with results submitted to DODEA-Pacific’s area office. Official results were announced Tuesday. “Austin, Jeremiah and Sam had fantastic meets,” Voth said, crediting his assistant coaches, especially longtime assistant Tony San Nicolas for the “knowledge, leadership and continuity he brings to our team.”

Humphreys stayed in the boys D-I hunt thanks to Isaac Robinson sweeping the hurdles and Ethan Elliott posting runaway victories in the shot put and discus. And Elliott said he thinks the best is yet to come in his senior year.

“Being that I had no formal training and was self-taught this season, I feel I did well,” said Elliott, who put the shot 13.59 meters and threw the discus 40.34. He says he’s aiming for 17 and 50 next season. “When I’m asked if I’m satisfied, no. There’s always more work to be done.” Humphreys junior Ethan Elliott swept the Division I and overall shot put and discus, but said he wasn't satisfied and that he can do better next year. (Brian K. McCollum/Special to Str) Nile C. Kinnick junior Jeremiah Hines took Far East Division I Fastest Male honors by sweeping the 100 and 200 and coming in second in the 400. (Dave Ornauer/Stars and Stripes)

“Tate’s an athlete,” Galvin said. “It was hard to decide what events to put him in. He can probably throw well, too. Maybe someday, he’ll be a decathlete.”

Among newcomers, Adrian Perry, an Osan sophomore, set a school record in winning the D-II and overall high jump with a leap of 1.83. Edgren freshman Elizabeth Johnson did the same in the girls, jumping 1.40.

Other multiple winners were Daegu’s Sanaree Evans in the D-II shot put and discus, Zama’s Gabriel Escalera in the D-II boys hurdles and Yokota’s Bryant in the D-II 1,600 and 3,200. 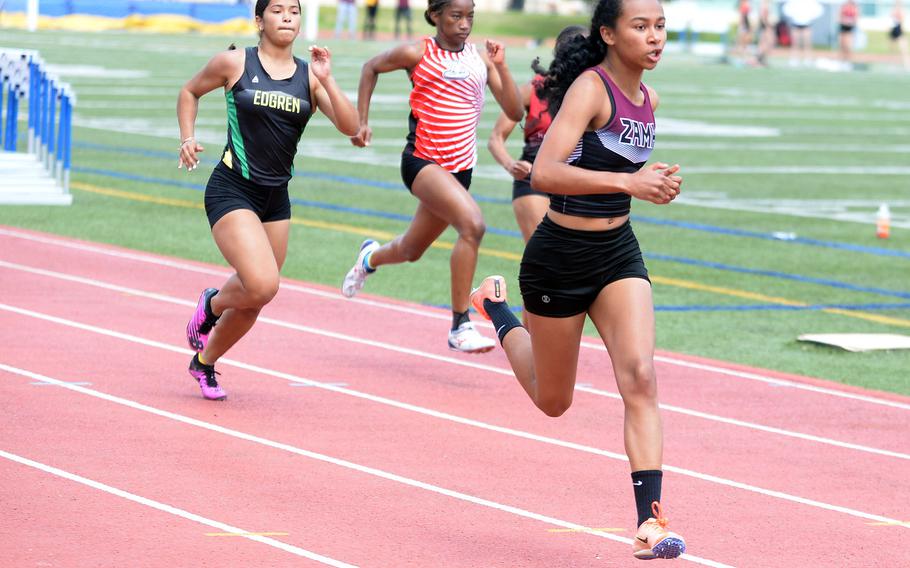