Nile C. Kinnick’s Angelo Dulce and Zama‘s Gabriel Escalera race side-by-side in what turned out to be a photo finish of the 300 hurdles during Saturday’s DODEA-Japan district track finals. (Dave Ornauer/Stars and Stripes)

YOKOTA AIR BASE, Japan – Sometimes the start of a sprint race can be just as important as the end.

Jeremiah Hines got a reminder of that when he nearly stumbled out of the blocks at the start of the 100-meter dash during Saturday’s DODEA-Japan track and field finals at Yokota’s Bonk Field.

But the Nile C. Kinnick junior recovered, stayed astride Christian Academy Japan’s John Sakaguchi and edged him at race’s end, 11.31 to 11.39 seconds.

“He made that last meter work,” Red Devils coach Luke Voth said of Hines, who went on to sweep the three short-distance sprints, including the 200 and 400, and helped lead Kinnick to the boys team title. 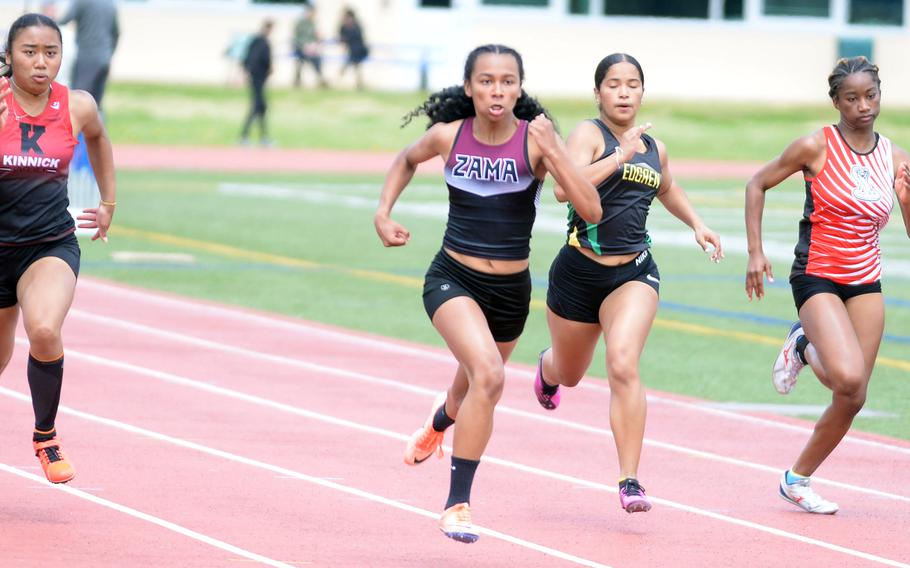 Zama sophomore Madison Anderson pulls away for the win in the 100 during Saturday’s DODEA-Japan district track finals. (Dave Ornauer/Stars and Stripes)

On the girls’ side, sophomore Madison Anderson left little to chance, beating Robert D. Edgren’s Elizabeth Johnson in the 100 by nearly a half-second and topping Yokota’s Trinity Stegall by 1.4 seconds in the 200. The Trojans won the girls title by 15 points over Kinnick.

All told, 328 athletes from 11 schools competed for about six hours on a chilly Saturday that began cloudy, but ended with sunny skies and a fairly strong tailwind on the track’s sprint side.

Hines said he was using a set of blocks that he wasn’t familiar with, and nearly fell at race’s beginning. “That messed me up at the start,” Hines said, adding that the start can mean everything. “Very much so, especially when you’re taller like me.”

His 11.31 time was .08 off his season best. Hines said he felt he “could have done way better,” and still has the Pacific record of 10.77 seconds in his sights. “That’s exactly what I’m after,” he said. “With more hard work, more dedication, I think I can do it.”

The stumble out of the blocks most likely motivated Hines the rest of the meet, Voth said. “He took care of business. I may have a new Jabari,” Voth said of Jabari Johnson, a sprinter he coached at Kinnick in the late 2010s who used to hold the Pacific 100 and 200 records. 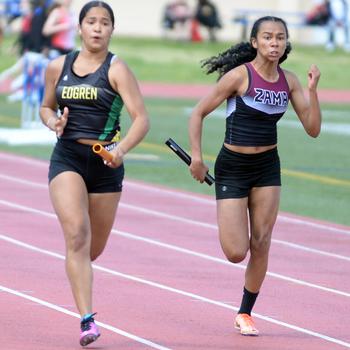 Among the closer finishes in Saturday’s meet was the boys 300 hurdles, in which Kinnick’s Angelo Dulce and Zama’s Gabriel Escalera matched each other hurdle-for-hurdle until the final one, which Dulce clipped as he finished .04 seconds behind Escalera, 45.69-45.73.

“That’s what makes it fun, the competition and all,” Escalera said. 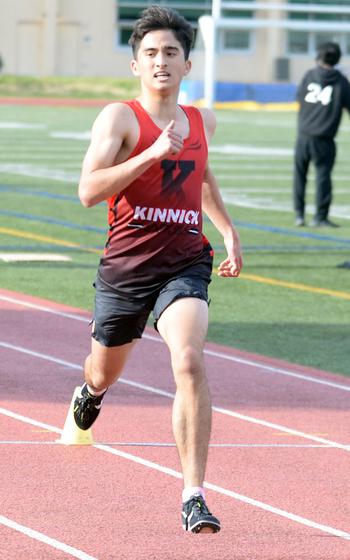 The presence of Zama sophomore Lilianna Fennessey, who beat Erler earlier this season, and Sacred Heart sophomore Sofia Sato made it a fun day, Erler said.

“They’re so much fun to run against,” the reigning Far East cross country champion said, adding that she feels she can “definitely” beat Saturday’s times. “It definitely made me run faster today.”

Kinnick senior Austin Shinzato, the reigning Far East boys cross country champion, also set personal bests in the 1,600 and 3,200, but came in second in both events, behind Take Zoot of American School In Japan and William Beardsley of St. Mary’s.

“I was just excited; it’s been 2½ years since I ran against other people,” Shinzato said, adding that he was “not upset at all” about the runner-up finishes. “I enjoy running against (those kind of runners), especially when they’re competitive.” Nile C. Kinnick junior Jeremiah Hines charges for the finish en route to a sweep of the 100, 200 and 400 during Saturday's DODEA-Japan district track finals. (Dave Ornauer/Stars and Stripes) Robert D. Edgren senior and reigning Far East cross country champion Morgan Erler heads for a victorious finish in the 3,200 during Saturday’s DODEA-Japan district finals. She swept the 3,200, 1,600 and 800. (Dave Ornauer/Stars and Stripes)