DODEA-Japan teams take to the fields and tracks again 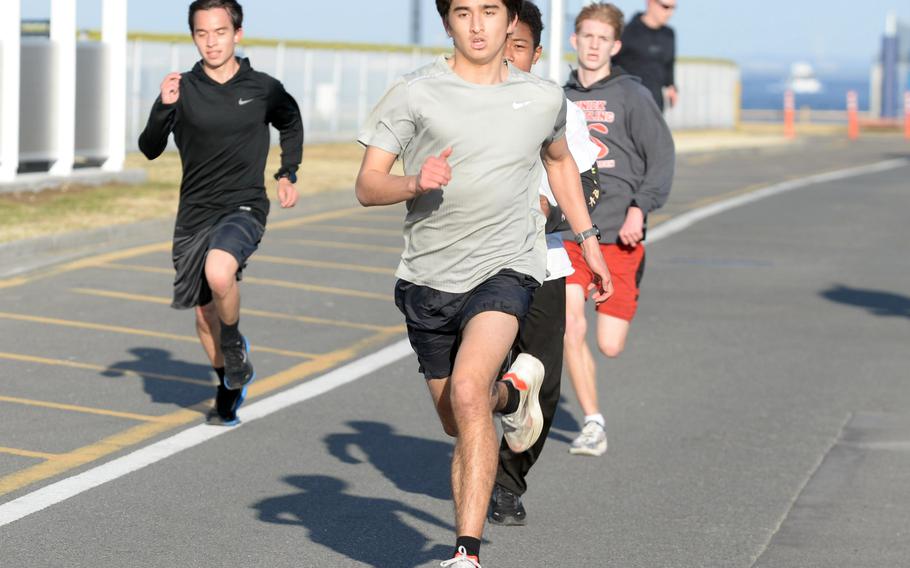 It was the fastest girls time in the Pacific and overseas in 2021, and believed to be the fastest ever posted by a DODEA-Pacific girls runner.

The Robert D. Edgren senior says she hopes such speed will translate over to DODEA-Japan’s high school track and field distance events.

And that means taking aim at Yokota senior Aiko Galvin, who ran the Pacific’s fastest times in the 800 and 1,600 meter last spring, and won the 2019 Far East cross country meet.

“I really just look forward to racing” runners like Galvin, “especially when it’s close at the end,” Erler said. “It’s just so much fun.”

Edgren, Yokota and DODEA-Japan’s other four high schools hit the tracks starting March 12, a six-week season culminating in the Far East virtual meet the last weekend of April, the second straight year there hasn’t been an in-person Far East due to the coronavirus pandemic.

“These kids are just dying to get back out there and do something,” Yokota athletics director Tim Pujol said of the prospect of a full spring season, but without Far East tournaments. 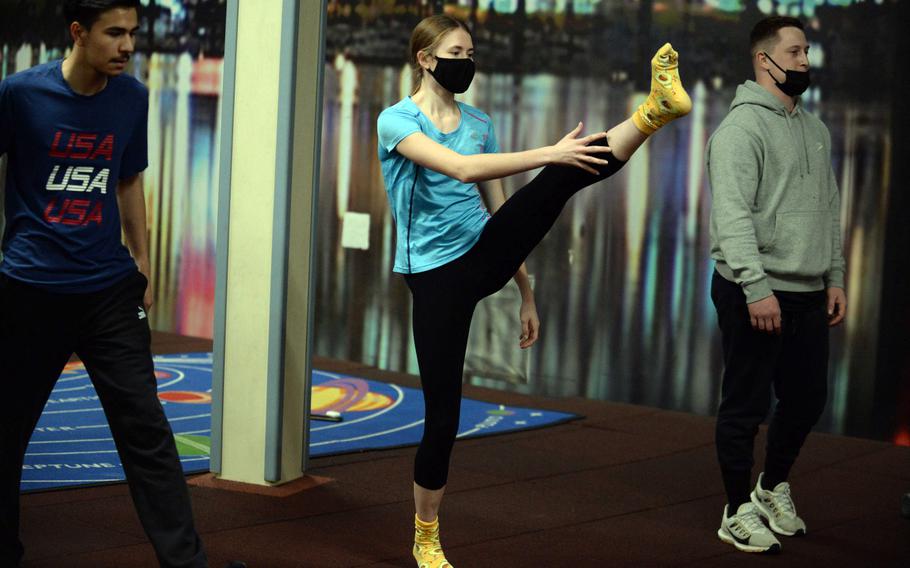 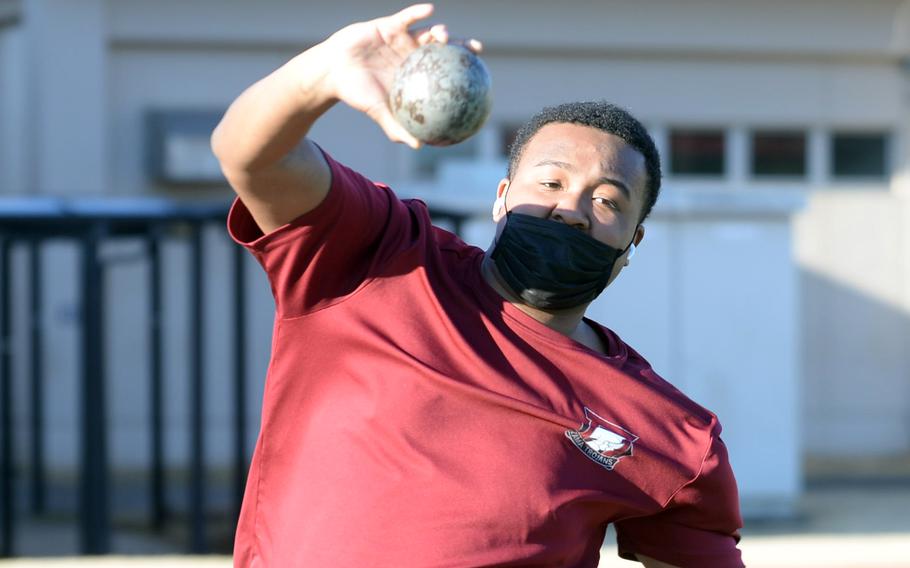 E.J. King wasn't going to have a track team, but enough interest was gauged and a coach, Yanica St. John, was appointed coach; 28 athletes came out for the first day of tryouts. (Dave Ornauer/Stars and Stripes) 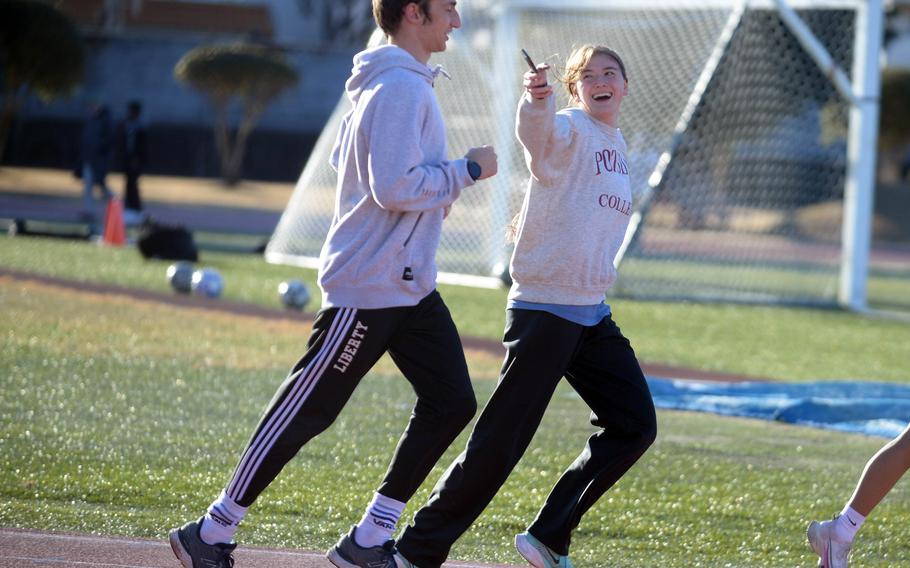 Senior Zildjian Tamayo, in hoodie, is expected to run the 400, 800 and 1,600 relay for Matthew C. Perry. (Dave Ornauer/Stars and Stripes)

Erler and Galvin have only met briefly, at the Tama Hills Recreation Center’s gift shop, where Erler says she discovered that Galvin has a “good sense of humor,” while Galvin calls Erler “really sweet.”

“It was nice to know that I was competing against somebody so nice,” Galvin said.

“Awesomeness,” Erler said of her first scheduled meeting with Galvin on March 12 at Yokota. “Even if I don’t win, it’s fun to race against my own times and try to better myself.”

Despite having only one competition last spring, as all of Edgren teams had, the Eagles have 36 students out for the sport, “the most we’ve had on my watch,” coach Timothy Schwehr said.

Edgren is also banking on O’moj Reeves, a sophomore sprinter; senior 800 runner David Blake and freshman Liz Johnson, a volleyball star who is trying her hand at sprints.

“It’s something I wanted to do, so I did it,” Shinzato said. “But it definitely would have benefitted me to keep running.”

The PCS Plane helped Matthew C. Perry; Miguel Pabon, a senior, transferred from Kadena to the Samurai. Coach Billy Henry sees him as a sprinter and relay runner. “He’s pretty impressive,” he said of Pabon.

E.J. King at first wasn’t going to have a track team, but Yanica St. John offered to take the team and 28 athletes showed up Wednesday on the first day of tryouts. 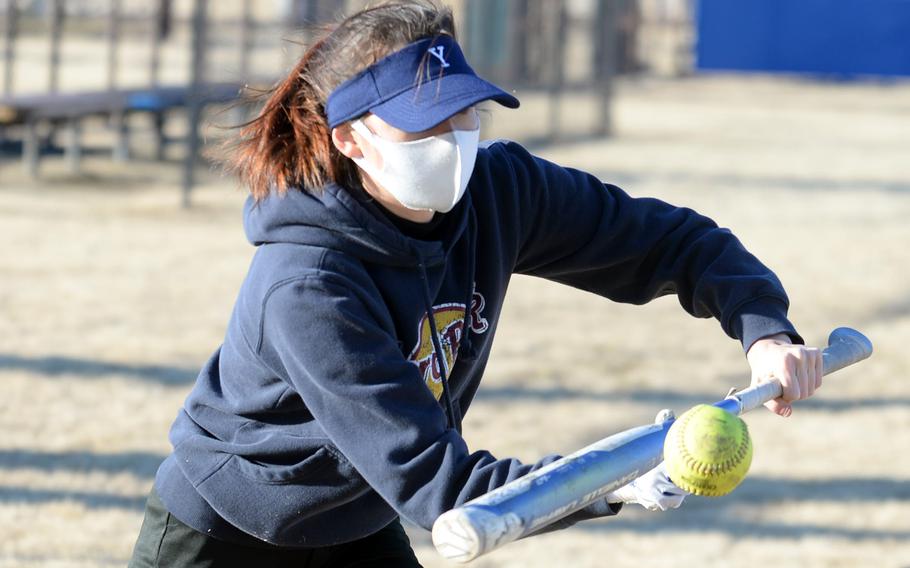 DODEA-Japan seniors, in particular, have expressed disappointment that their careers won’t end with an in-person Far East tournament as has been customary in years past.

“But at the end of the day, I’m glad to get out on the field and have a season,” Yokota senior shortstop Elena Haas said.

Maybe the youngest program in DODEA-Japan is Robert D. Edgren, coached by David Carrano, who spent the last seven years at Kinnick. There are only freshmen and sophomores on the roster, Carrano says, led by sophomores Evelyn Lee and Chiara Morin.

King also has two strong pitching arms in sophomore Michelle Breyette and freshman Moa Best, “who will work for the long haul,” coach Alex Sudul said. “I have some athleticism and I can move a lot of pieces.”

Citing a lack of participants, Zama will not field a softball team for the second straight year. 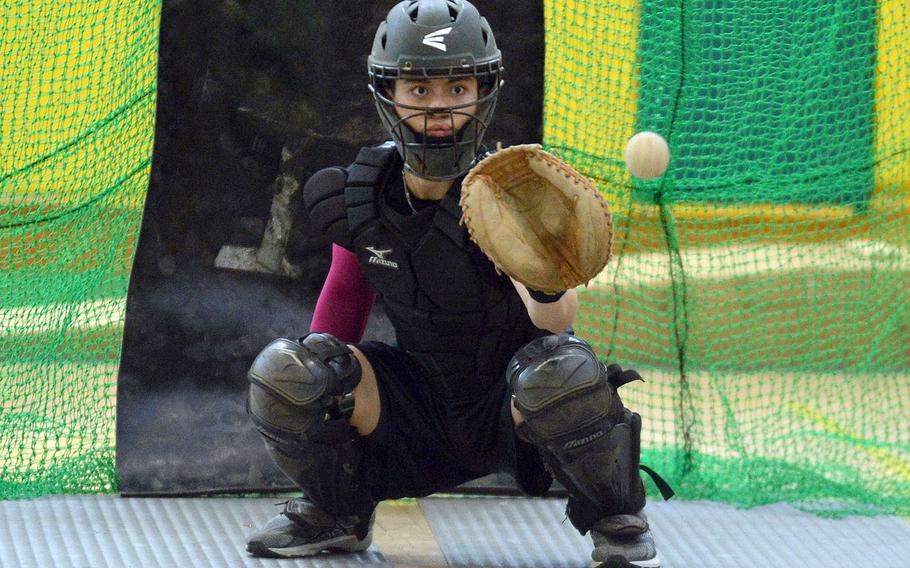 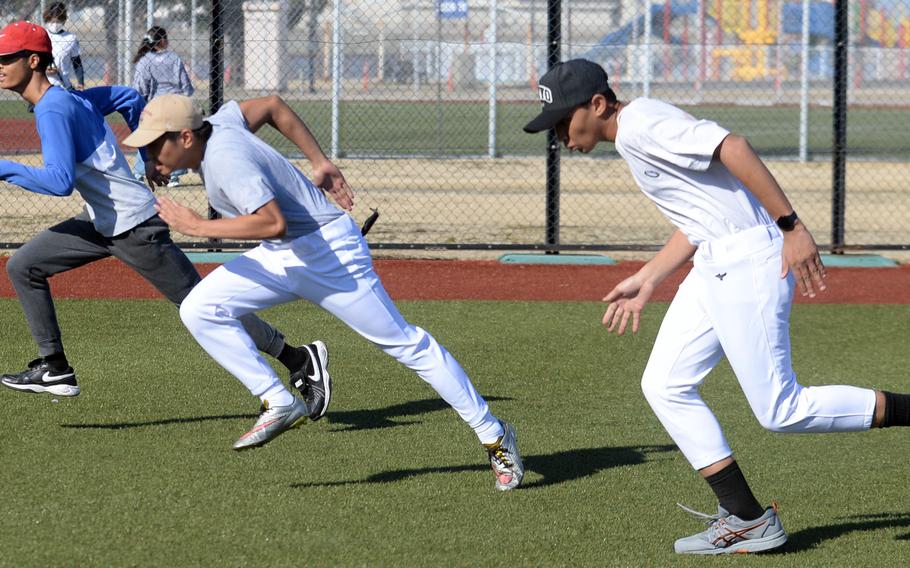 Sophomore Caleb Schmiedel is one of a solid cadre of pitchers for Zama’s baseball team. He struck out 27 batters in 14 1/3 innings last season and had a .409 on-base percentage. (Dave Ornauer/Stars and Stripes)

One sturdy pitcher transferred, but the PCS Plane was kind to Yokota, which got junior pitchers Dylan Tomas and Noah Cruz from Edgren, with Tomas’ father, Marlon, helping Barry Oxendine as assistant coach. “It’s a brand-new team otherwise,” Oxendine said. “We have some experience.”

Perry has seven players back and “will rely on freshmen to contribute immediately,” coach Frank Macias said. Senior Roy Clayton III will pitch, catch and play shortstop, senior Parker Staley will pitch and play third base and sophomore Nickolas Elizondo is “the best catcher we’ve had in about four year” and will also pitch.

Senior pitcher-catchers Isaac Christensen and Andrei Lee are the two key returners on a Kinnick team long on youth and inexperience. 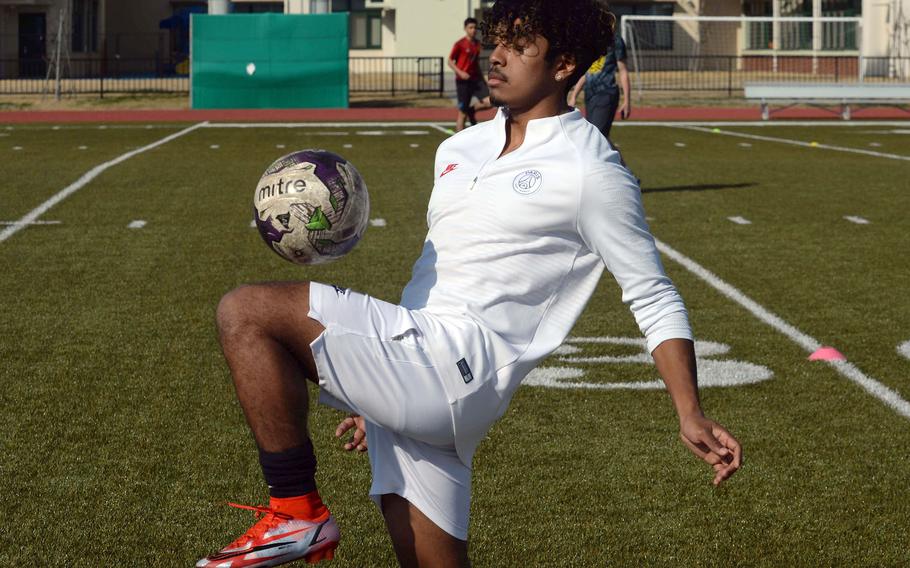 Senior Denzel Gray is projected to be a cornerstone for Matthew C. Perry's boys soccer team at center-midfield. (Dave Ornauer/Stars and Stripes) 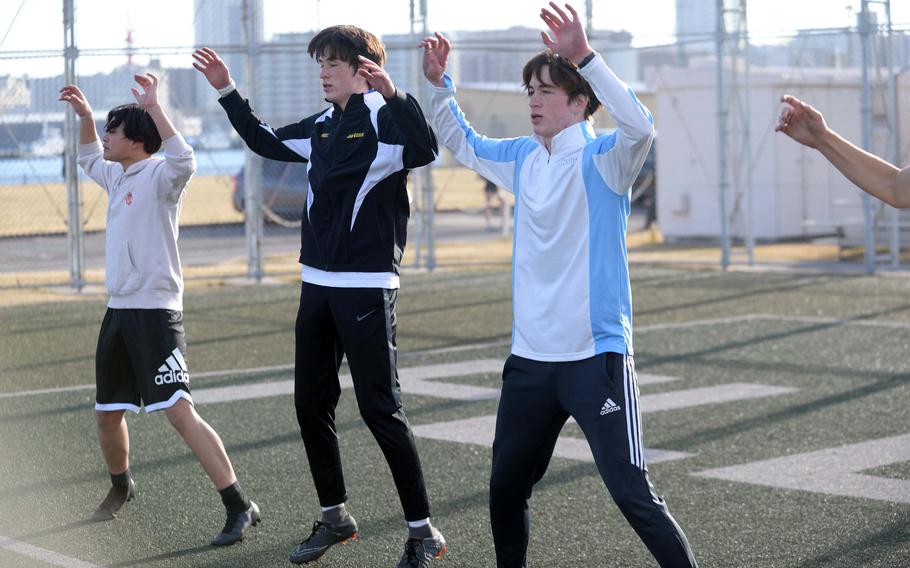 Zama’s boys soccer team is mostly young, but the coaching staff says the Trojans have a good core of players to build around. (Dave Ornauer/Stars and Stripes) King hopes to be stronger than the unit that went winless last year, with 18 players out, including goalkeeper Christian Hecox and sophomore defender Joseph McGrath. “We’re building on what we had last spring,” coach Ricky Andrew said.

Zama is relatively young, but has a handful of seniors in Kobe Parker (forward) and Alec Carter and Joseph Suyama on the backline. Junior Marques Cuffie returns at keeper. Assistant coach Ben Ingram calls the Trojans “a good core of players to build around.”

Edgren would be a veteran team, coach Steve Belnap said, “if we had the chance to play” many matches the past two years. The pandemic wiped out the 2020 slate in total and the Eagles only played two matches in 2021.

Senior Noah Henderson is the most experienced at forward, but hasn’t played since he was a freshman. Junior Elias Alvord attended the Real Salt Lake Academy for junior players. “We’re really excited to have him,” Belnap said. 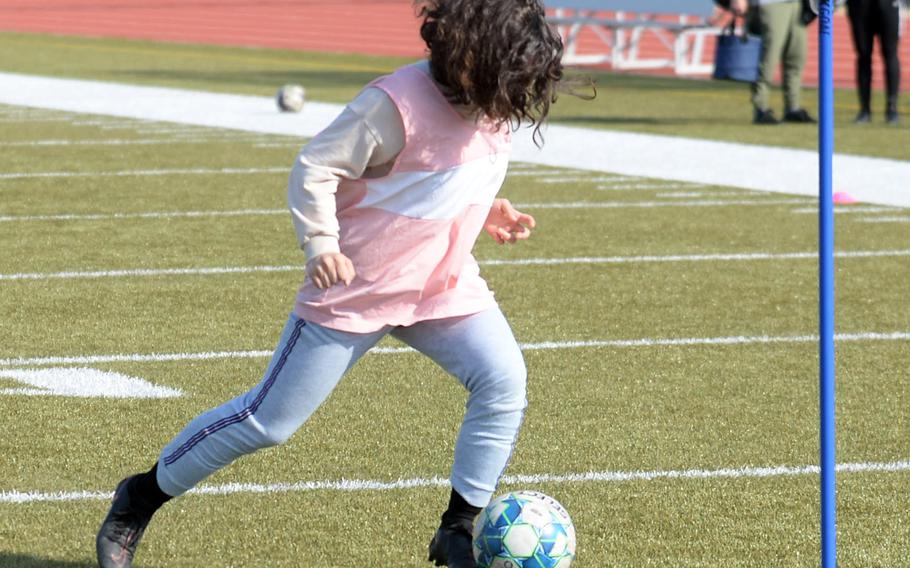 Sasha Malone's face may be hard to see at times what with the hair, but Matthew C. Perry's soccer freshman is being counted on to keep a clear view on the defensive end. (Dave Ornauer/Stars and Stripes) 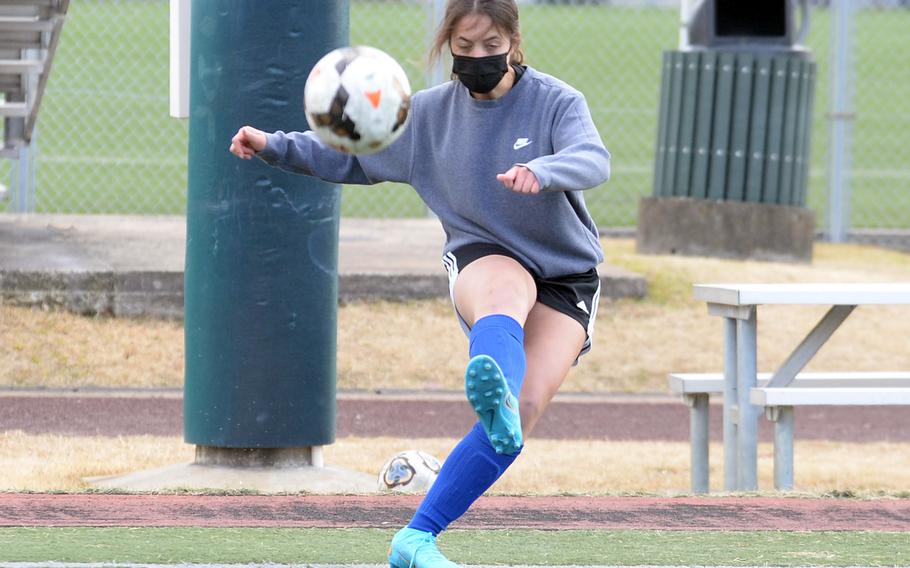 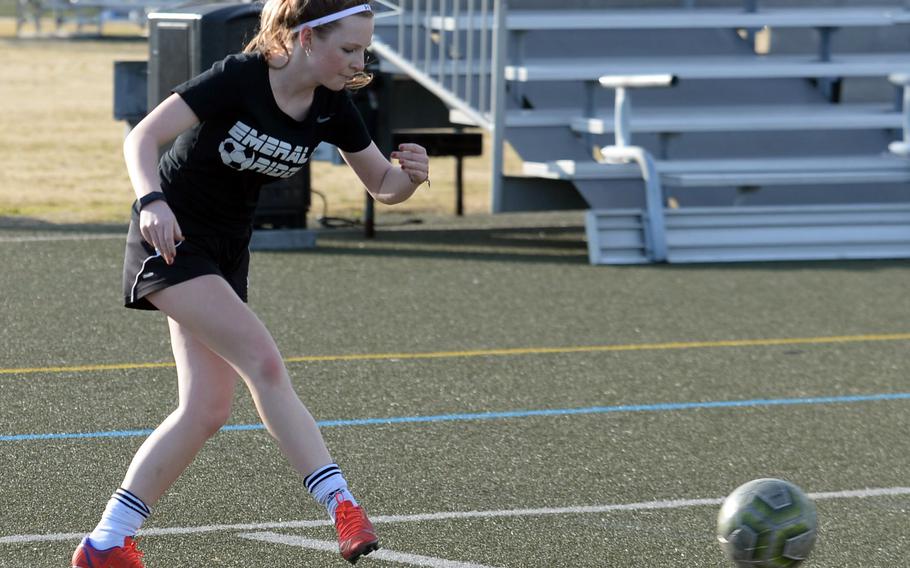 Senior Keiya Carlson (seven goals) returns along with the Wellons sisters, junior Lily (midfield) and sophomore Lucy (defense) for a Yokota team “looking to be fierce this year,” coach Matt Whipple said. He is trying to find “diamonds in the rough” to go with eight returners.

Senior midfielder Aubrey Giles (five goals, three assists) and senior sweeper Raelyn Flores are the lone two returners on a Trojans team on which “everybody else is new,” coach Lyndsey Schmiedel said. Zama will try Keisha Steele-Loli in goal.

Perry welcomes in a new coach, 2008 Seoul American graduate Daniel Burns, and is “definitely rebuilding,” with 13 of 21 players either freshmen or sophomores. Freshman Sasha Malone could be a shining defensive star. “By the end of the year, we might surprise somebody,” Burns said.