After a year off, winter sports teams are back in DODEA-Pacific 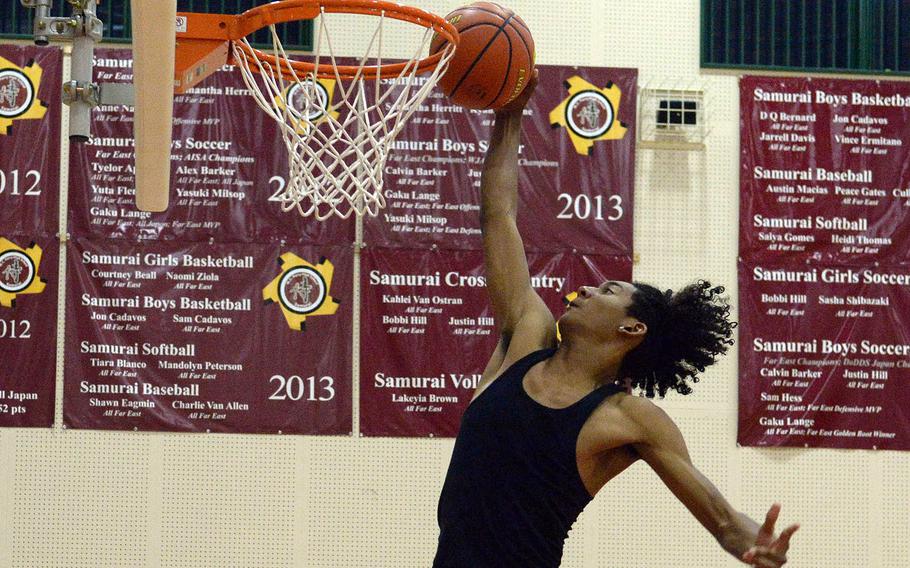 The Trojans won their first two Far East pool play games and appeared primed for a run at their first D-II title in seven years. 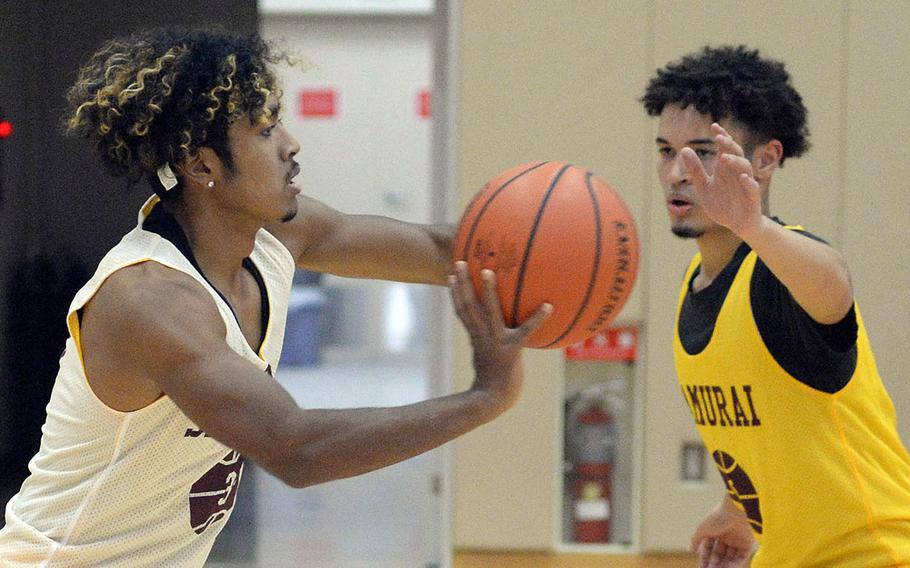 Buy Photo
Seniors Denzel Gray and Roy Clayton line up at guard for Matthew C. Perry boys basketball after they played football for the Samurai. (Dave Ornauer/Stars and Stripes) 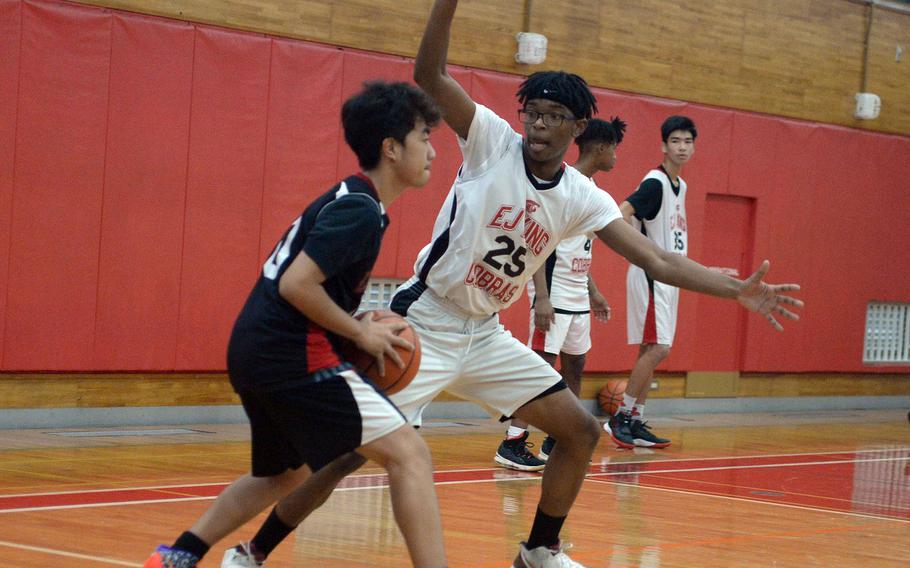 “We were one of the top teams. It kind of hurt because we thought we had the team that could win it all,” McNeill, now a senior forward, said Wednesday during practice. “This being my last year, it’s kind of win or bust.”

The entire 2020-21 winter season was then canceled due to the pandemic. So now, McNeill and others are picking up following the gap year. 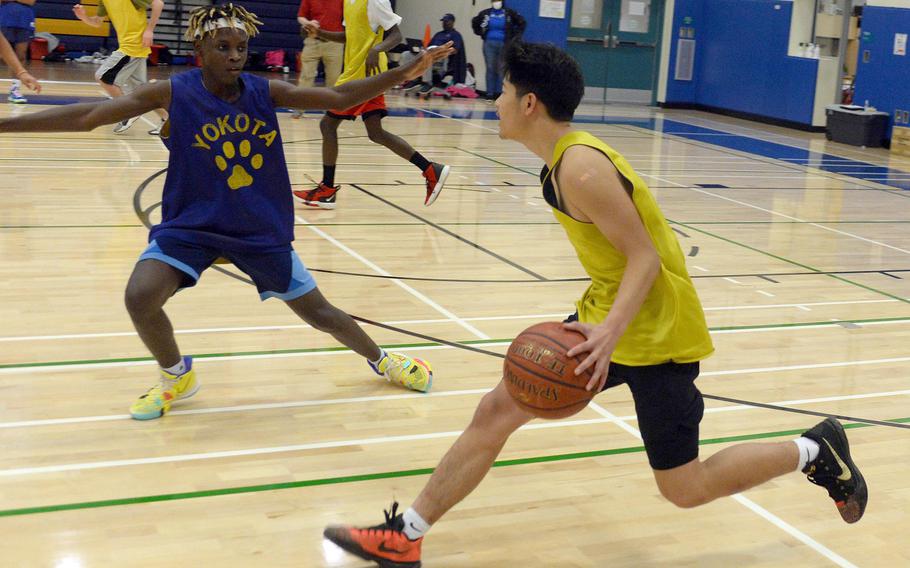 Buy Photo
Junior Dylan Tomas, with ball, transferred from Edgren to Yokota; guarding him is freshman Jai Bailey, the third member of that family to play for the Panthers. (Dave Ornauer/Stars and Stripes)

“But we had that gap year and lost a whole group of seniors,” Taylor said during practice Friday. “Now, we have a big group of wrestlers, but many of them haven’t wrestled before.”

Starting over after a gap year is far more involved than just rolling out the basketballs, Panthers boys basketball coach Dan Galvin said. Not only were DODEA-Japan’s teams shut down, but so were youth programs in which youngsters learn fundamentals.

“The first week (of practice) was just teaching drills,” Galvin said. “You really have to go back to basics, teaching stuff that they would ordinarily have already.” 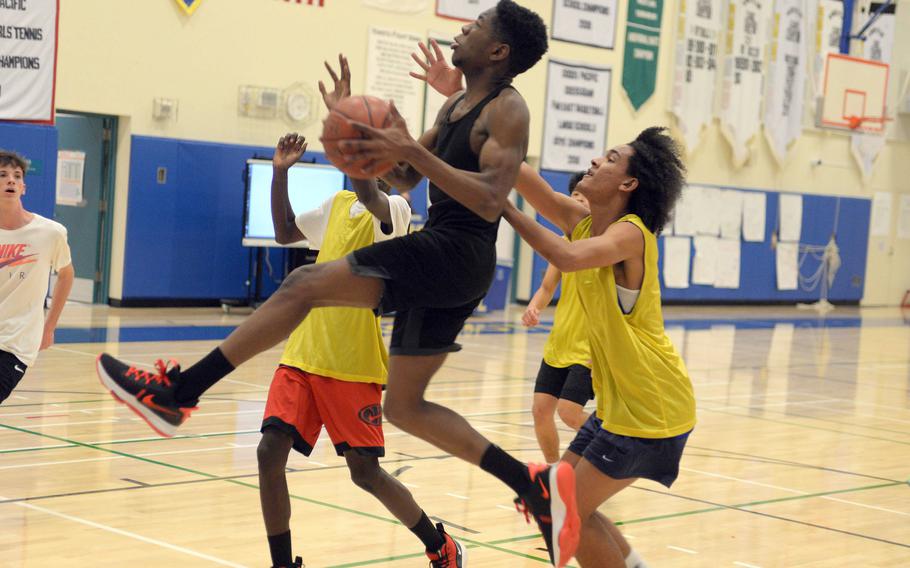 No Far East tournaments are scheduled this winter, but the DODEA-Japan season schedule ends with a boys basketball tournament at Yokota, girls at Zama and wrestling at Kinnick Feb. 11-12.

“It takes some of the gas out,” he said of there being no Far East. “Whatever happens now, happens. We all got damaged because of corona.” 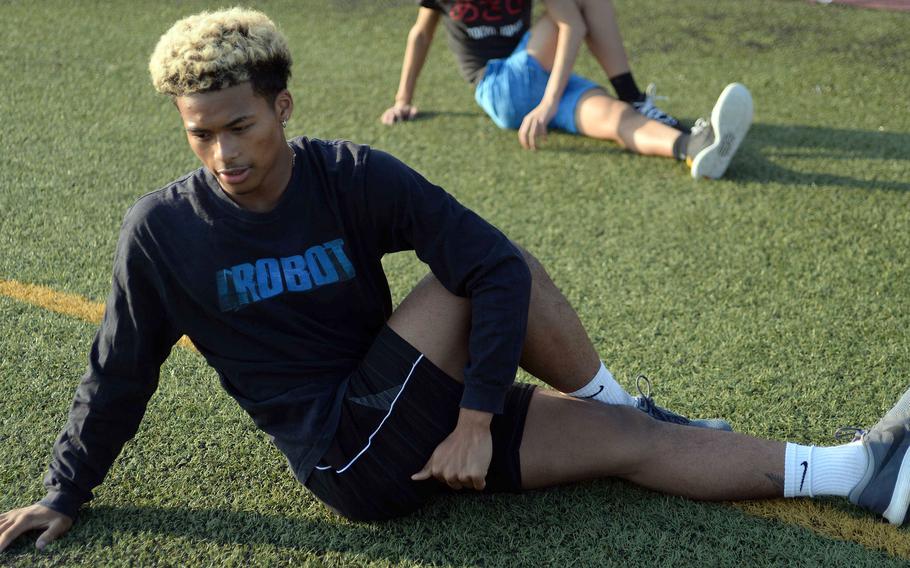 Buy Photo
Senior Keshawn McNeill is one of two returners for Zama boys basketball and was with the team in Korea in February 2020 when the Far East Division II tournament was canceled halfway through the first day. (Dave Ornauer/Stars and Stripes) 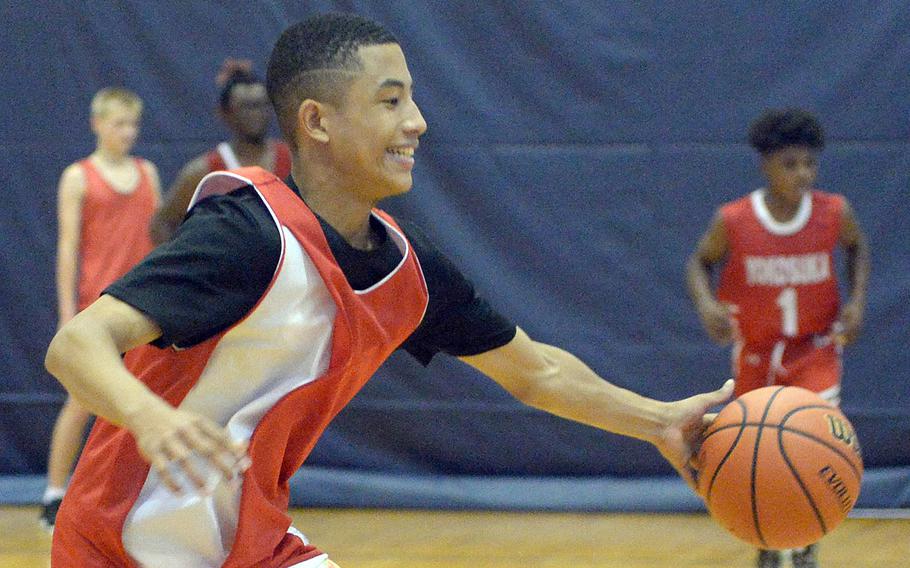 McNeill and fellow senior Murray Gillerson are Zama’s lone returners. Jarius Brown is an up-and-coming freshman who’ll most likely start for new coaches Saul Arras and Danny Davis. “I have to beat them with speed and aggression, because we don’t have the height,” Arras said. 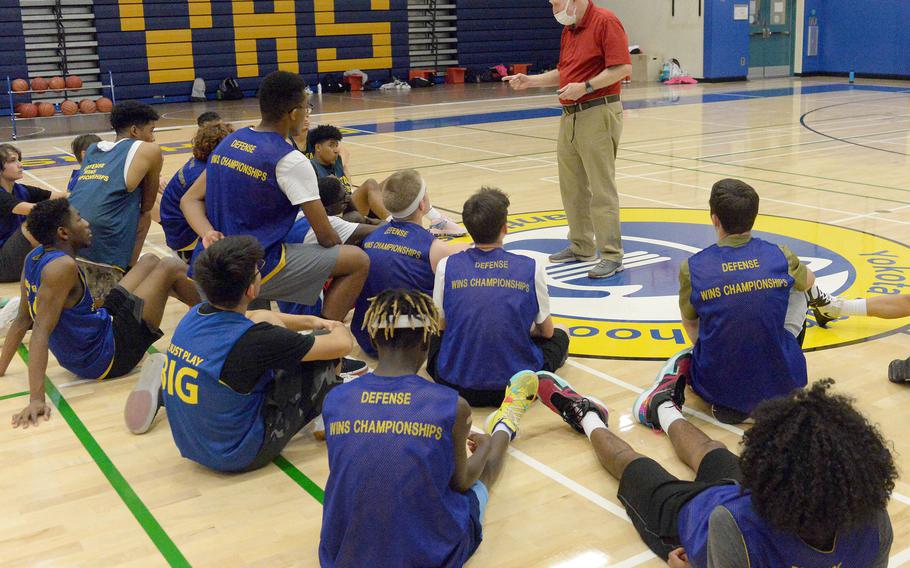 Buy Photo
John Thek, who coached Yokota's boys varsity for 15 years in the 1980s and 1990s, goes over the fundamentals of pressure defense. (Dave Ornauer/Stars and Stripes)

One Eagles player who got away, junior Dylan Tomas, will start at point for Yokota, which also has juniors Marcus Woods and Zemon Davis moving up from the JV. Sophomore Tre Perkins and freshman Damian Abrams help fill out a roster with just one senior.

E.J. King returns Cameron Reinhart, a junior who was 5-5 as a freshman but is now 6-1. Slender senior Keith Lombard (6-4) is the other returner. Freshman Jeremy Phillips shows promise at shooting guard.

“It’s a complete rebuild, but I have a franchise player to build around,” coach Travis Elliott said of Reinhart.

Daniel Burns takes over at Matthew C. Perry and is borrowing heavily from football with seniors Shion Fleming, Roy Clayton and Denzel Gray, while Joshua Blanquisco slides over from tennis. “Quick and scrappy. Defense will carry us until our offense comes along,” Burns said. 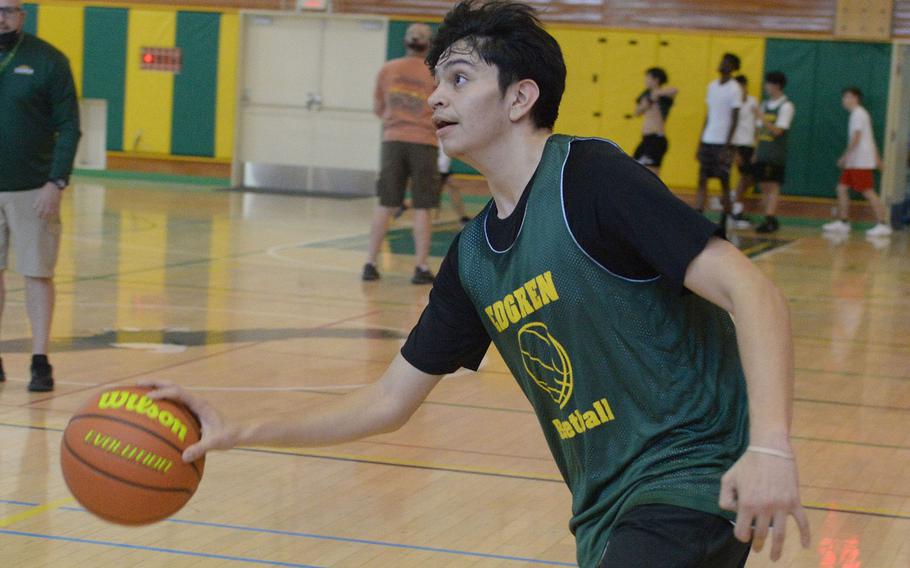 Most E.J. King teams are typically small, and coach McKinzy Best’s Cobras are no exception. His tennis-playing twin freshman daughters, Moa and Miu, line up in the backcourt, junior Aileen Fitzgerald returns and senior newcomer Angie Romero is new to the backcourt.

“You don’t have to be tall to play big,” the elder Best said.

The Red Devils have some height in senior center Dana White, but the lineup is guard heavy with juniors Mikaila Joy Miranda and Amyka Jones and freshman Jasmine Pho, whose mother, Jessica Sugihara, played for Kinnick in the early 1990s. 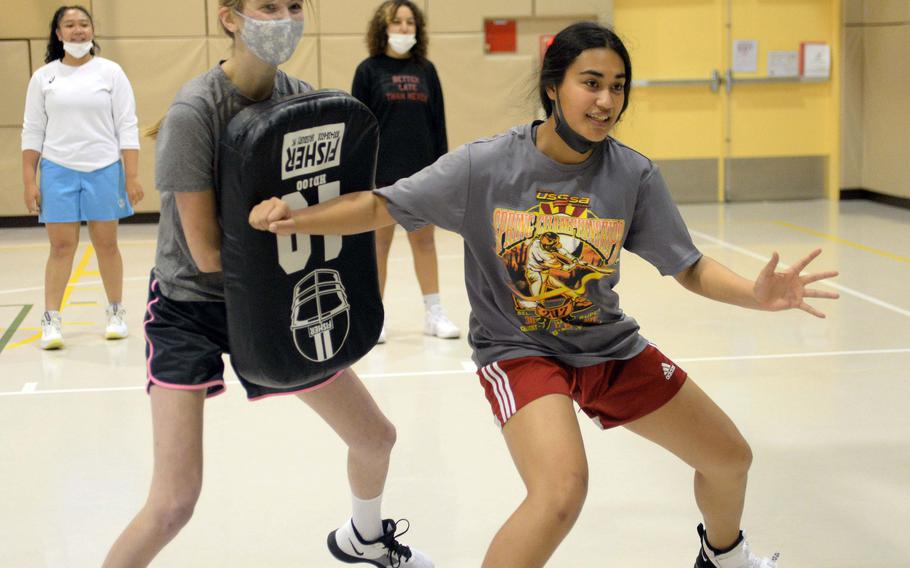 Coach Joey White agrees with Best regarding guards. “If you have a big, what good is it if you can’t get it across midcourt?” he said.

All of the key Trojans players who won Far East D-II in 2019 are gone, save for senior forward Kiersten Sharp. Two sophomores will be key to the rebuild, Kierstyn Aumua (forward) and Lindsey So, who played guard in Japanese junior high school.

Three freshmen two years ago return for the Samurai, forwards Breaunna Hayes and Nyla Matos and guard Aiya Versoza. “Rebuild. We have a lot of work to do,” coach Mike Cobb said. 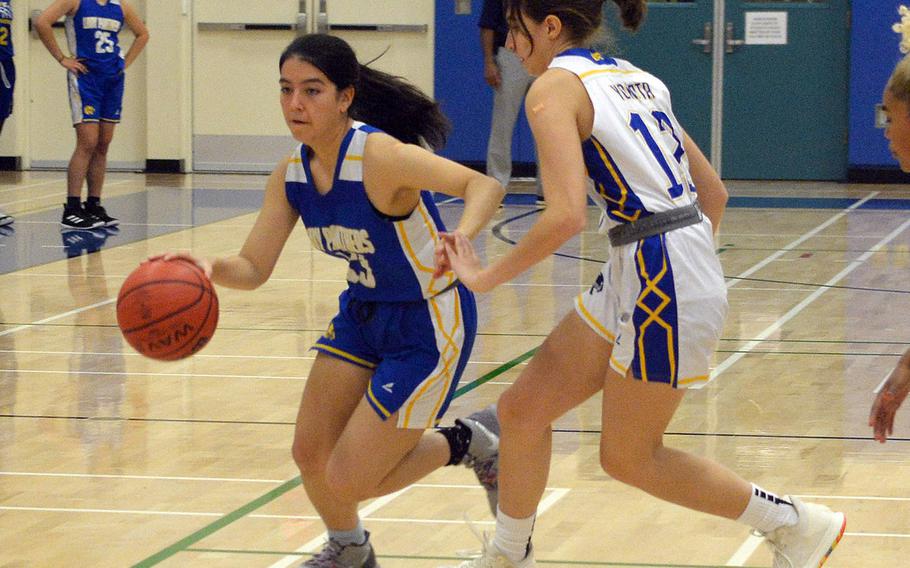 Edgren will have a new coach for the first time in 30 years. Sarah Richardson has retired and Brian Johnson comes in from Fort Knox, Ky. His team returns junior guards, Jaylie Johnson, Maliyah Magat and Zalea Washington.

Senior Keiya Carlson is Yokota’s lone returner, while senior Madison Van Gorder moves in from Kadena. Freshman Erika Haas could be an impact player at guard. 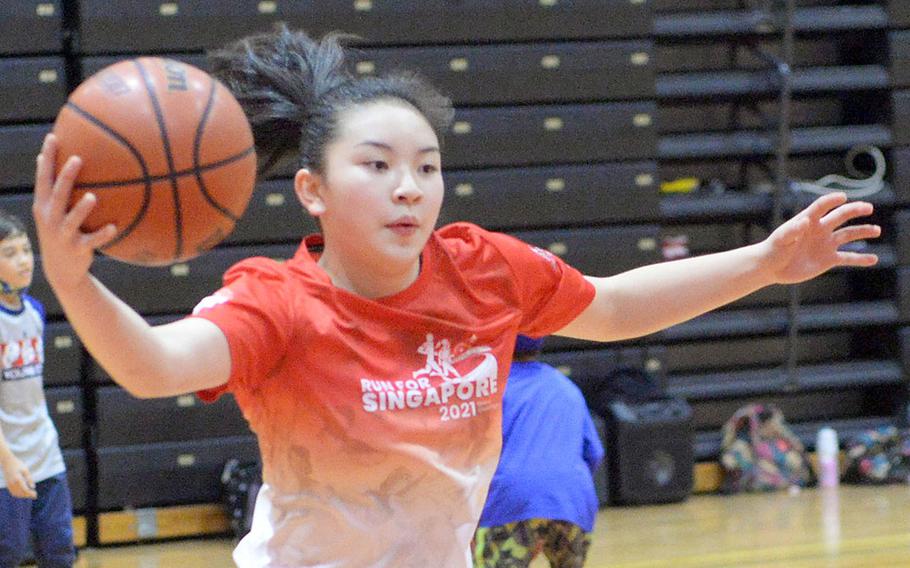 Buy Photo
Freshman Jasmine Pho, a transfer from Singapore, is a second-generation Kinnick girls basketball player; her mother, Jessica Sugihara, played for the Red Devils in the early 1990s. (Dave Ornauer/Stars and Stripes) 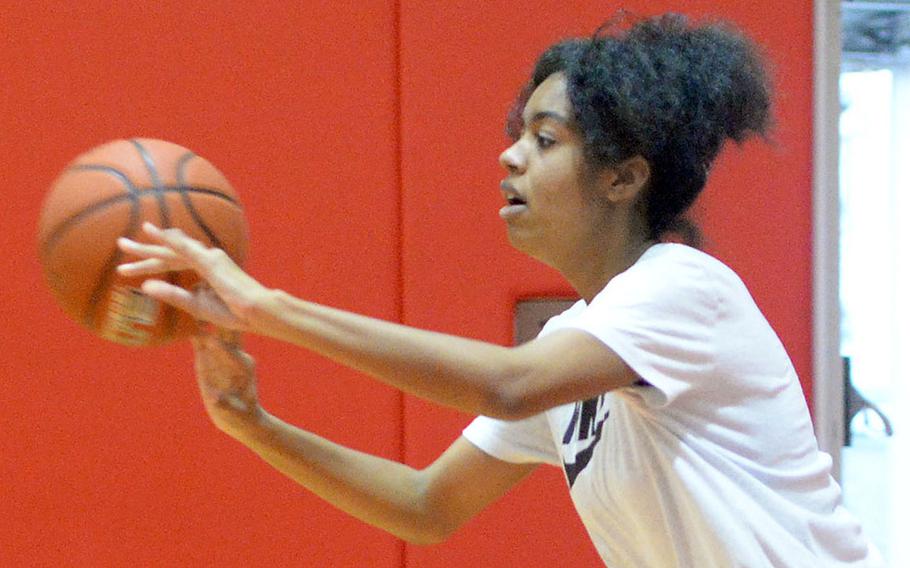 Buy Photo
Senior Dana White is the one tall player on a Kinnick girls basketball roster loaded with guards. (Dave Ornauer/Stars and Stripes)

Edmonds, with a DODEA-Pacific record 11 Far East D-II titles to his credit, faces a major rebuilding task with only senior Douglass Tackney (141) and Brock McGlothan (101) returning. The Eagles have 10 freshman and one sophomore. 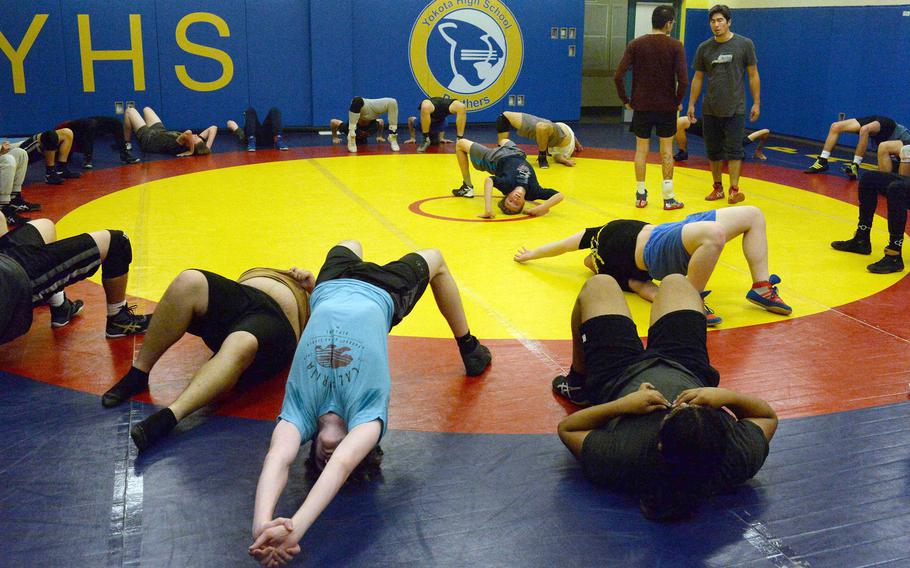 Buy Photo
Yokota's wrestlers practice back bridges during practice. The Panthers have 32 wrestlers in the practice room this fall. (Dave Ornauer/Stars and Stripes)

E.J. King, citing lack of numbers and facilities, will not field a team this season. 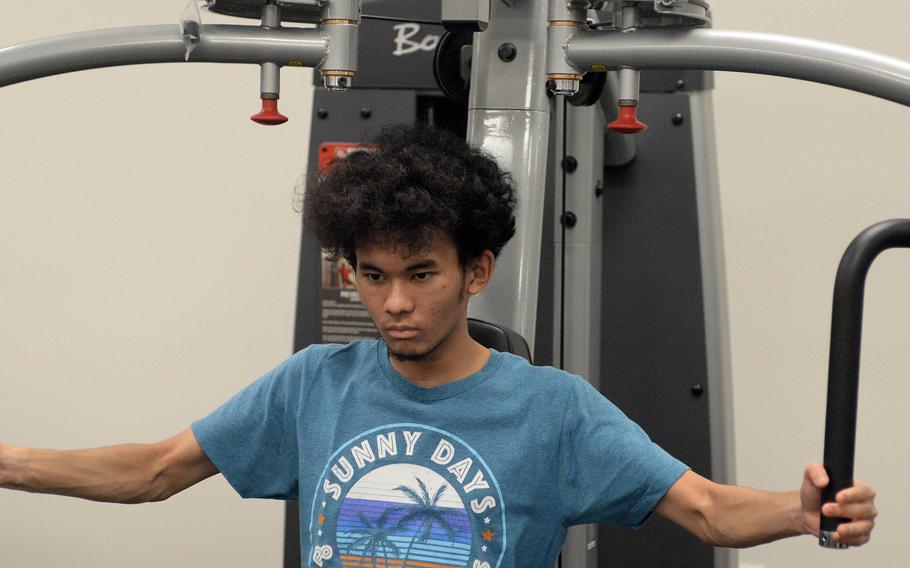 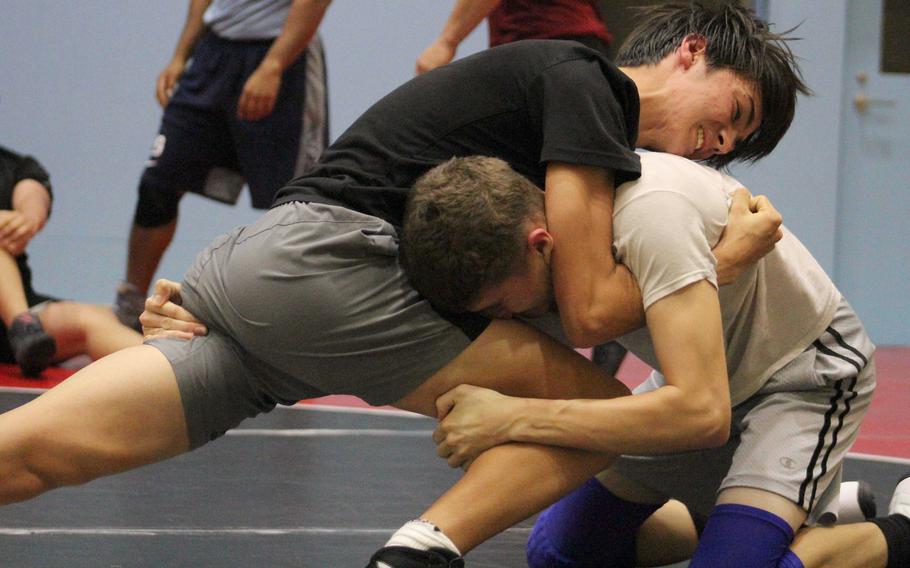