Football titles on the line in Japan, Okinawa 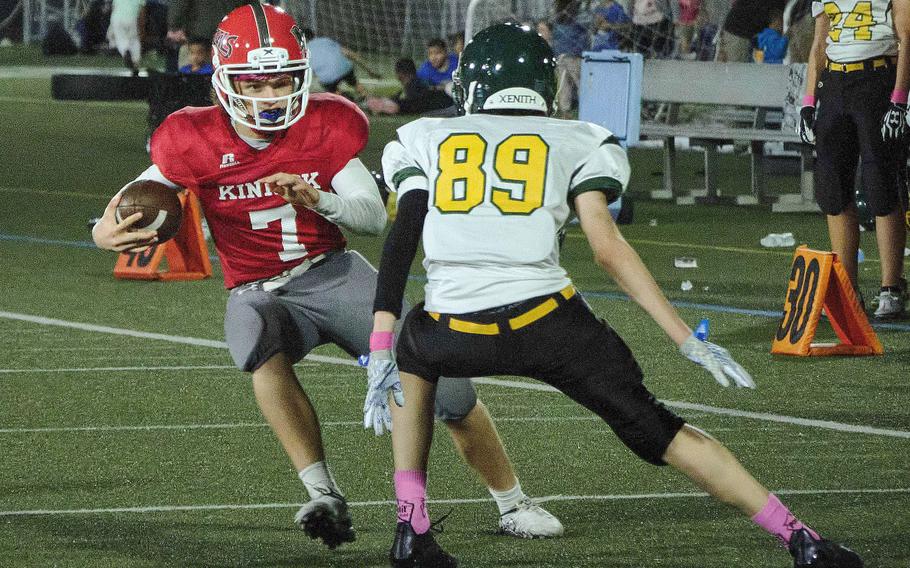 Buy Photo
Zeke DeLaughter is a senior first-year quarterback for Nile C. Kinnick and has accounted for 885 yards total offense and 19 touchdowns this season. (Daniel Betancourt/Stars and Stripes)

Better have another look. This year’s versions of both teams a bit out of character.

The Red Devils have actually rushed for nearly twice the yards they’ve gained passing, 1,137-692. The Samurai have accumulated 773 yards on the ground, but have also thrown for 497, the most in any season on coach Frank Macias’ seven-year watch.

The two teams will put their balanced attacks to the test at 7 p.m. Friday at Samurai Field on Marine Corps Air Station Iwakuni.

It’s homecoming for Perry, which enters the contest at 5-1, a game behind 6-0 Kinnick, which beat the Samurai 28-21 on Sept. 17 at Yokosuka Naval Base.

“Our previous game was physical on both sides of the ball, and that is what our players love,” Kinnick coach Dan Joley said.

But while both ballclubs can be physical, they also possess a great deal of speed and quickness, both coaches said.

“We have the most team speed that we’ve had since I’ve been here,” Macias said. “Kinnick has tremendous team speed, and with so many athletes, they are so versatile.”

“Coach Macias has his team playing great football and it’s exciting to see the dynamic offense he’s installed,” Joley said. “We are really excited to play a high-caliber football team.” 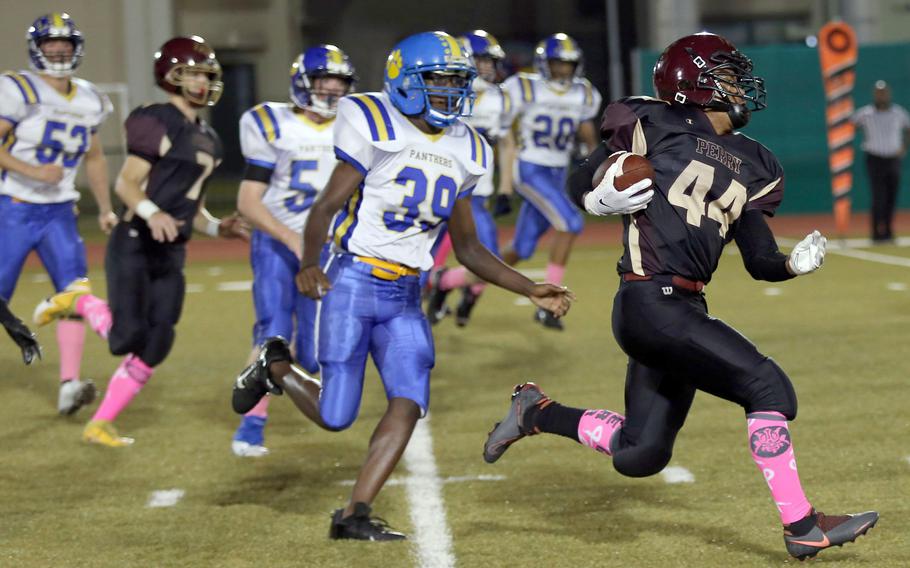 Denzel Gray leads Matthew C. Perry with 849 total yards and has scored five touchdowns, two on kick returns and one on a 97-yard pick-six against Nile C. Kinnick on Sept. 17. (Kevin Rossiter/Special to Stripes)

But quarterback Roy Clayton has thrown more than any previous Samurai quarterback under Macias, 28-for-47 for 497 yards and seven TDs.

Receiver Shion Fleming has 440 all-purpose yards with nine touchdowns, eight receiving and one on pick-six. Denzel Gray leads Perry with 849 total yards, 534 on 13 returns, two of them kick-return TDs and one a 97-yard interception-return touchdown in the Sept. 17 game at Kinnick.

Thus, the Samurai “need to stay with what we do best: Control the clock and keep their offense off the field,” Macias said. “It is paramount that we … not get ourselves into a shootout.”

For his part, Joley said he and Kinnick “anticipate a close game. “We believe the team that plays error-free ball will come away the victor.”

Kinnick would capture the DODEA-Japan title outright with a victory. A Perry win by eight points or more would give the Samurai the crown.

-- Humphreys Black visits Osan, kickoff at 6 p.m. Each team is 1-2 and the winner gets to face Humphreys Gold (3-1) next week with the DODEA-Korea title at stake.

-- Kadena (2-1) hosts Kubasaki (1-2) in the most defensive season the teams have played in recent memory, the Panthers have outscored the Dragons 34-33. A win by Kadena would give the Panthers the title outright; if Kubasaki wins by two points or more, they would capture the season series on point aggregate.