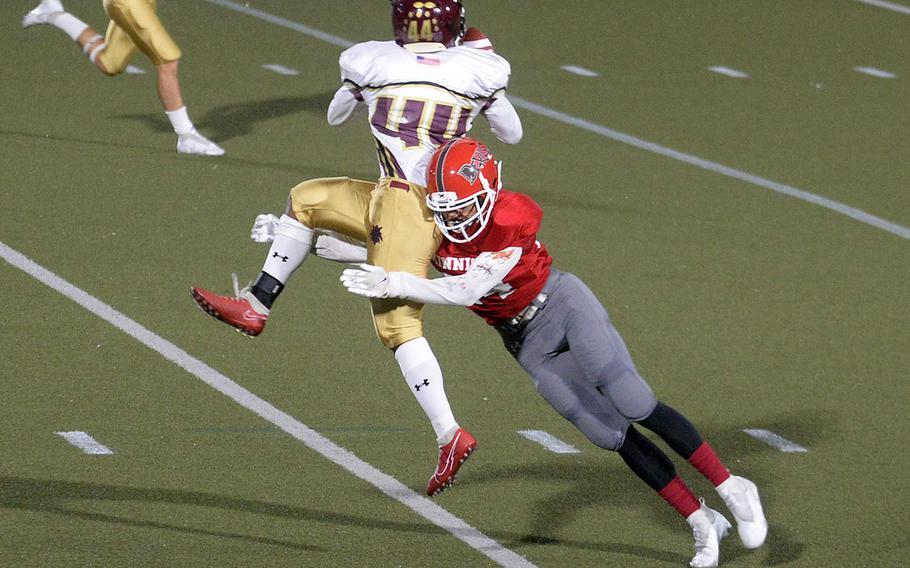 YOKOSUKA NAVAL BASE, Japan – After throwing an interception that got Matthew C. Perry back in the game, Nile C. Kinnick’s Keith Reed said he was determined to make up for his mistake. 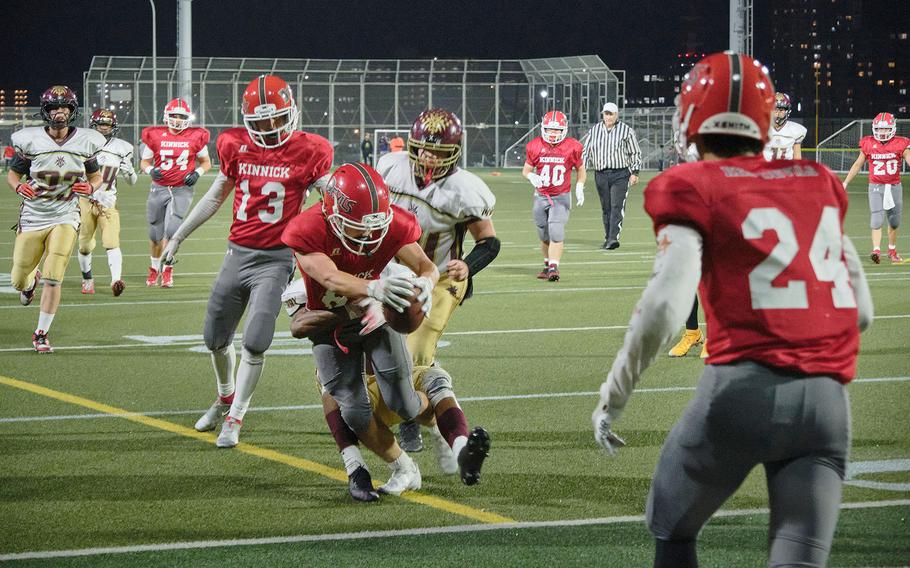 The Division I Red Devils improved to 4-0 and took charge of the league title chase, and handed the Division II Samurai their first loss in three games.

“That was fun, wasn’t it?” Kinnick coach Dan Joley said. “This is Friday night lights at its best. That (Perry) is one well-coached, hard-hitting football team and I’m glad our kids got to experience that. We found the character of our team tonight.” 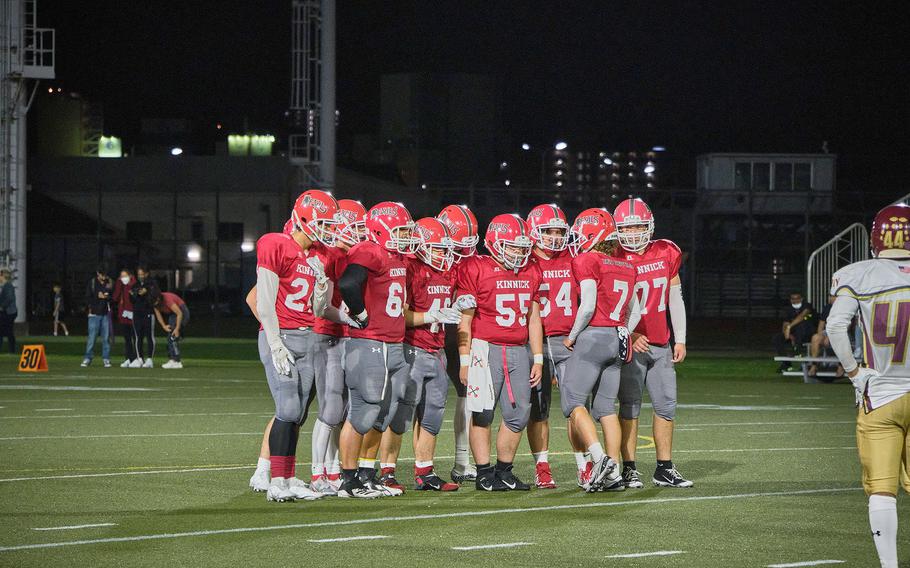 Perry took the early lead, Kinnick scored three unanswered touchdowns, then the Samurai rallied to tie it early in the fourth quarter before Euceda’s touchdown sealed it.

“It’s the heart of a Samurai,” Perry coach Frank Macias said. “Great effort. We knew Kinnick was going to be tough. David almost got Goliath tonight.” 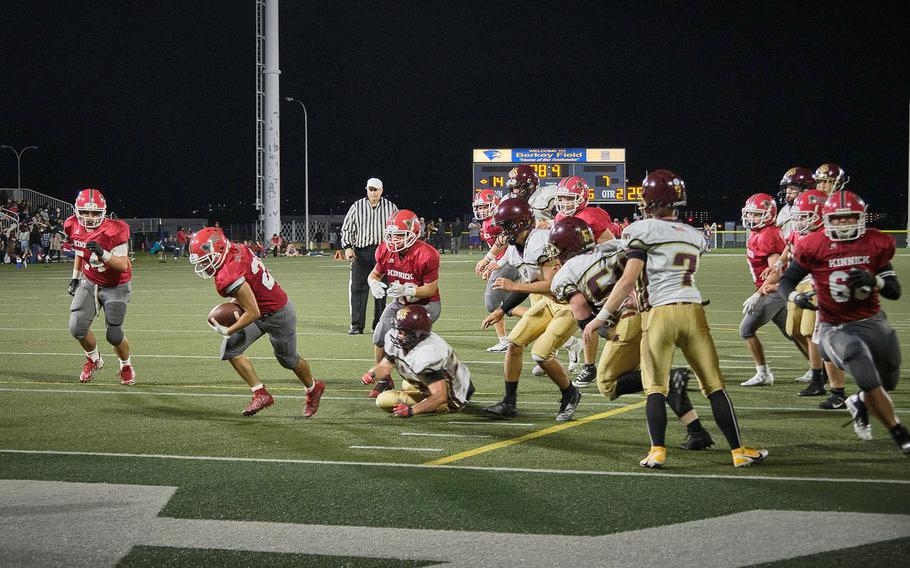 Kinnick won despite losing starting quarterback Zeke DeLaughter with a left-knee injury late in the first half. Reed took over to start the second half.

Kinnick’s Kou Nishiyama ran 24 yards to set up first-and-goal at the Perry 6 off a fake field goal. But Reed’s pass on the next play was picked off by Samurai linebacker Denzel Gray. He returned it 97 yards for a TD that cut Kinnick’s lead to 21-14 late in the third period. 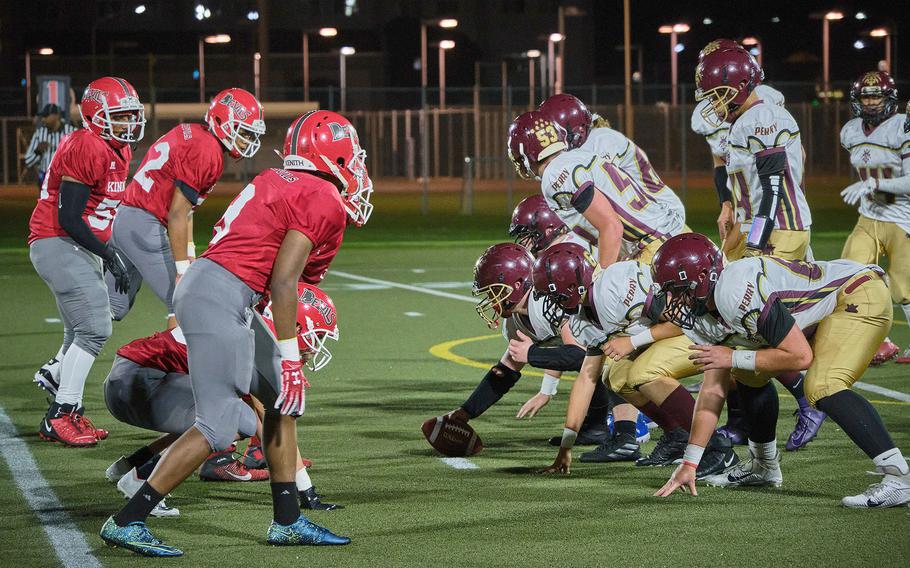 “Denzel is no longer just a soccer player,” Macias said of Gray, who finished with 215 all-purpose yards, including a 31-yard touchdown run to open the scoring 3:37 into the game. “He has turned into a football player. He has taken a liking to football.”

After Gray’s pick-six, the Samurai tied it on Roy Clayton’s 41-yard touchdown pass to Shion Fleming with 7:42 left. 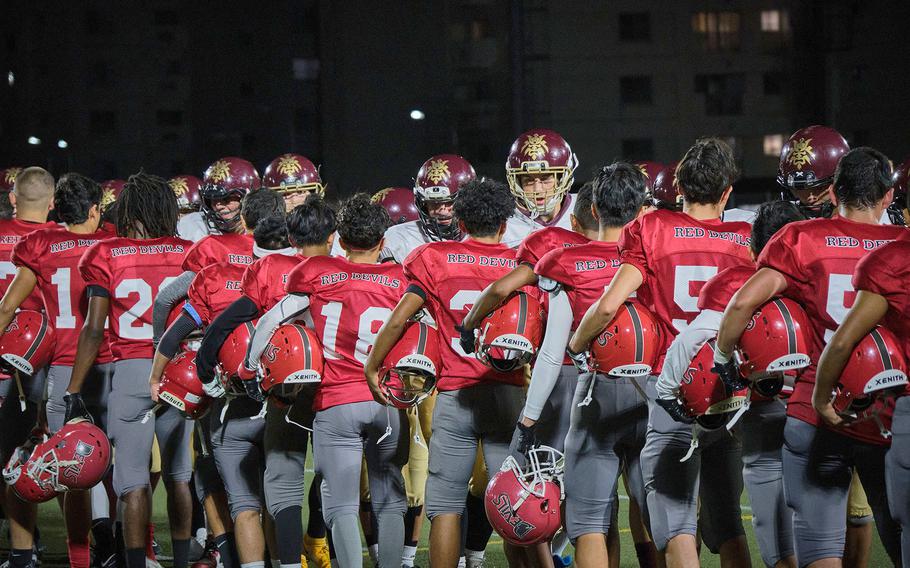 On the next possession, the Red Devils went 80 yards on seven plays in 3 minutes, 19 seconds, during which Reed took a keeper around left end for 48 yards.

“It was all in the heat of the moment,” Reed said. “I saw an opening, I bounced off my own tackle, then off one of the opposing players and I just kept on going.” 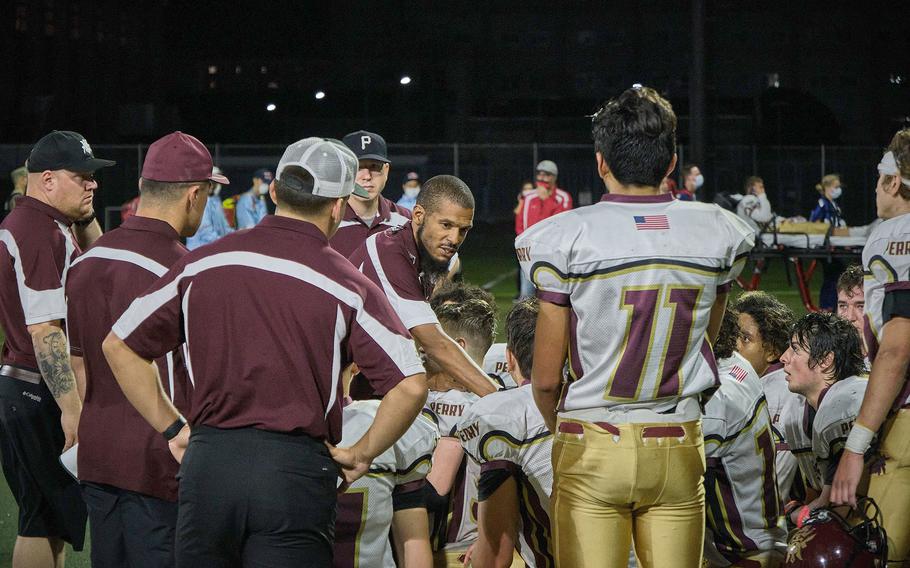 That put Kinnick at Perry’s 14-yard line. Four plays later, Euceda ran off left tackle into the end zone to cap the scoring.

Euceda finished with 126 yards on 25 carries, including a 5-yard touchdown run late in the first half that put Kinnick up 21-7. As a team, Kinnick rushed 48 times for 327 yards. 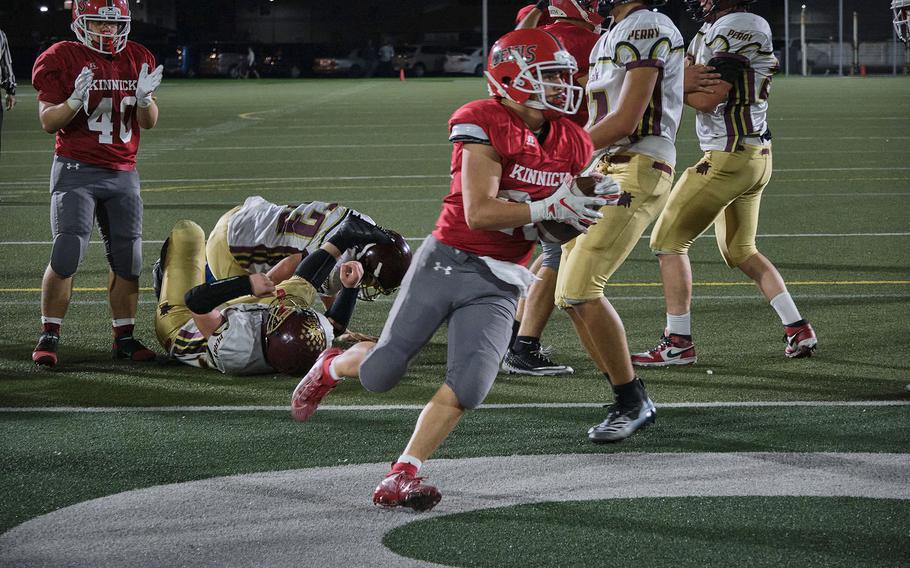 “The running game put it on their shoulders and they responded,” Joley said.

Before leaving after the first half, DeLaughter sneaked 1 yard for a touchdown and tossed a 13-yard scoring pass to Justin Rose, who also recovered a fumble.

Kinnick’s Daniel Burke intercepted a Clayton pass with 4:13 left. The Samurai had one last chance to tie it, but on fourth-and-11 from the Red Devil 36, Kinnick’s Skyler Schaeffer sacked Clayton to end it.