There won't be sports on Guam or football at Daegu Guam High's football team can still scrimmage and practice, but in the wake of the announcement Friday that the island's public, private and charter schools were shutting down due to the COVID-19 pandemic, the Panthers have no teams to play against. (Donna Rhodes/Special to Stripes)

There won't be football on Guam or at Daegu

Guam High School’s sports teams have nobody to play, following the announcement Friday by Guam’s governor shutting down the island’s public, private and charter schools due to a spike in coronavirus cases.

The Panthers can still scrimmage, practice and condition, which is more than can be said for other schools in Guam.

Meanwhile, Daegu in Korea won’t field ’s football team this fall, the school announced Monday. Fewer than 15 students need to play a nine-man format signed up to play. DODEA-Korea’s season schedule has not been set yet, but the district’s athletics directors said the fall season is to begin Sept. 10-11.

The Panthers were set to begin the Guam Interscholastic Sports Association season Saturday at home against George Washington.

DODEA-Pacific leadership met by video conference Monday with Joint Region Marianas and the commands at both Naval Base Guam and Andersen Air Force Base, at which it was decided “schools will remain open on base,” Chief of staff Todd Schlitz told Stars and Stripes by phone Monday afternoon. 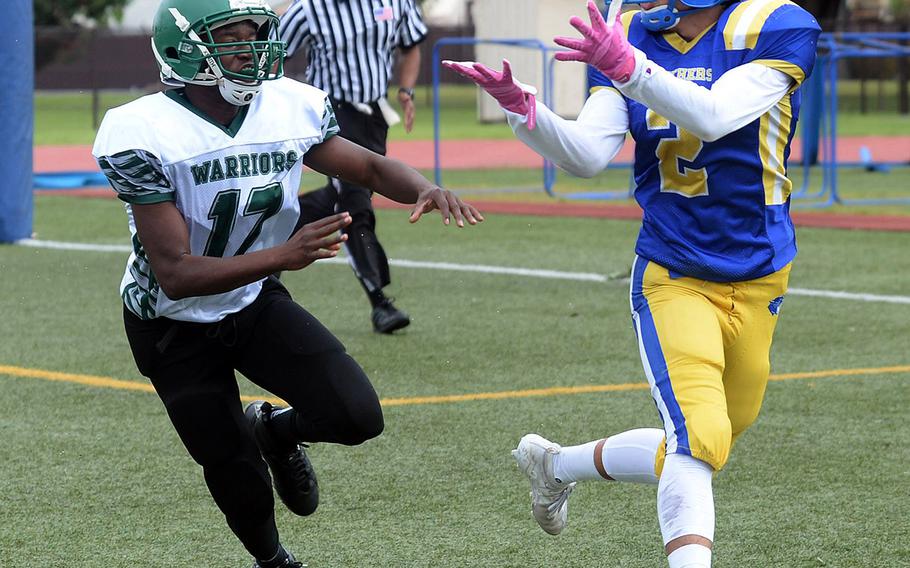 Buy Photo
Daegu's football team, beset by a lack of numbers, has been shuttered at least for the 2021 season. (Dave Ornauer/Stars and Stripes)

“They won’t have anybody to play, but at least they can do something,” he said.

The news was met with disappointment by longtime Panthers football coach Jacob Dowdell. Football season on Guam was canceled altogether last year due to the pandemic.

“I’m really hurting for the kids,” Dowdell said. “They worked so hard over the summer, they did everything that was asked of them and now they’re being told no, they can’t play football.”

Guam’s Pacific Daily News reported Friday that hospitalizations on island have increased by 300 percent the last two weeks. Governor Lou Leon Guerrero didn’t specify how long the school shutdown would last, but that schools were closing to be proactive about possible COVID-19 spread, the PDN reported.

In Daegu, athletic director and football coach Blake Sims said the school had 10 sign up for football, “but we only had six or seven committed” at any one practice. To at least meet DODEA’s criteria for nine-man format, which Daegu played in 2019, at least 15 were needed.

“We weren’t even close to that,” Sims said, adding that the school’s small enrollment – 129 as of Aug. 30 – will limit Daegu to tennis, cross country, golf and boys and girls volleyball.

“It is what it is,” Sims said. “We have 60 percent of our enrollment out for sports. It’s hard to create kids that you don’t have.”

The decision leaves just two football programs in DODEA-Korea, Osan and Humphreys. There was no immediate word whether Humphreys would compete as one team or split its football enrollment into two, as it did for volleyball and basketball last school year.