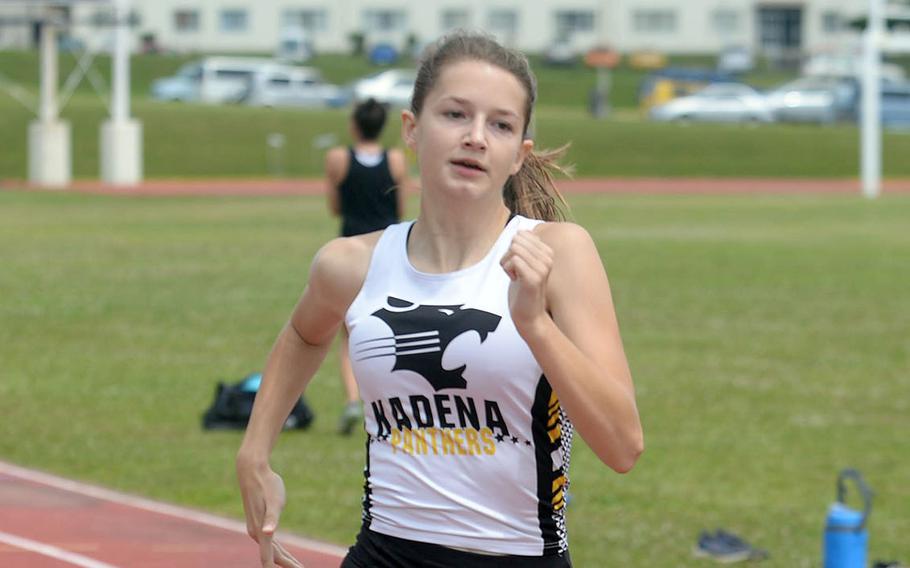 Buy Photo
Kadena's Grace Carey won the girls D-I triple jump, the first time the event was on the Far East meet program, and also took the 400 as a bonus. (Dave Ornauer/Stars and Stripes)

Athletes straining against each other until they cross the finish line. Records often fall. The thrill of victory and the agony of defeat, to borrow a famous phrase.

But the 2021 version, conducted virtually over the weekend at locations sometimes thousands of miles apart, may go down as one of the most unique. 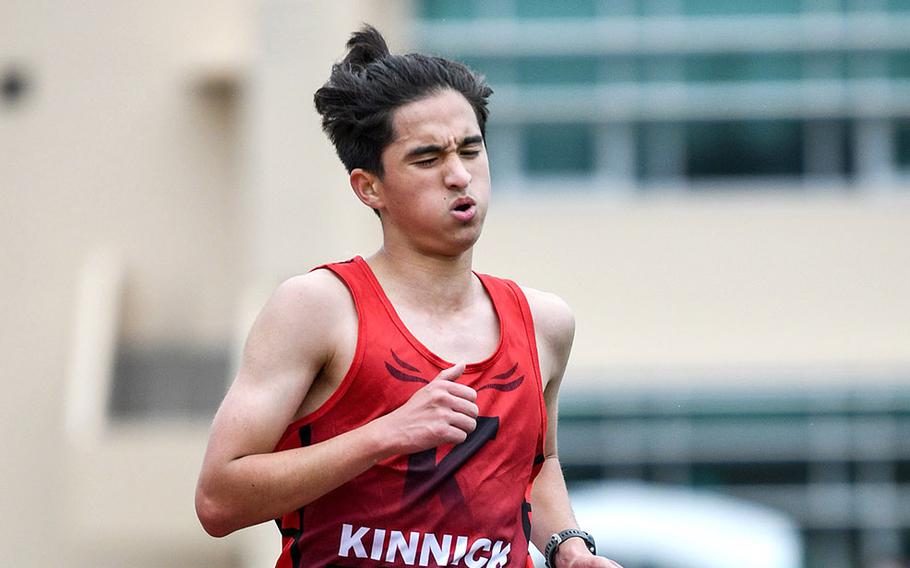 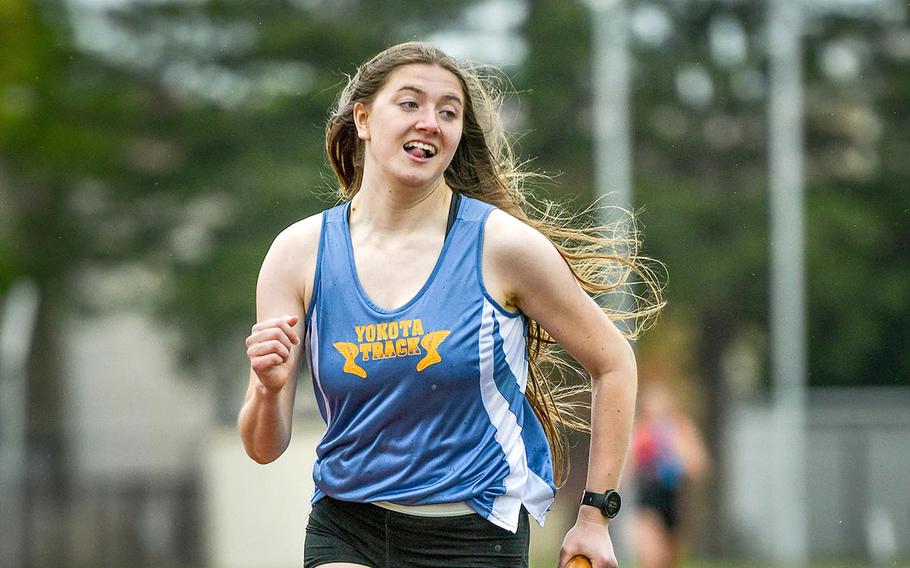 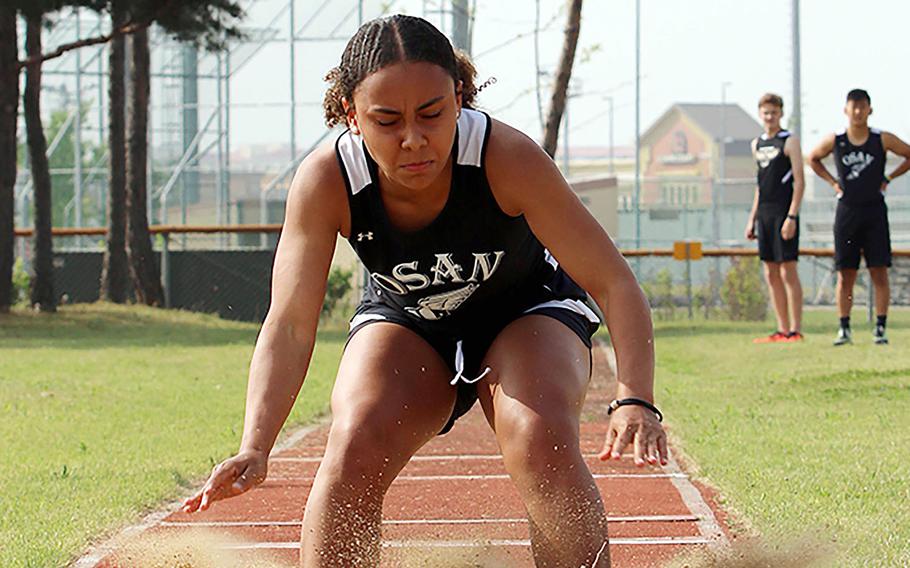 “Considering all the obstacles that we had to overcome, this feels like a ‘breath of fresh air,’” Jones said.

“I’m excited for our kids. Good news,” Robertson said. “Seventh time is the charm. This was seven years in the making for me. We really busted our butts for this.”

It was one of only two season-ending Far East sports championships this school year due to concerns over the coronavirus pandemic. Cross country was held in the fall and was also run virtually.

“It would have felt a little better if it had been a non-virtual meet,” Robertson said.

Each school fielded 14 individual events and team relays Thursday through Saturday, using automated timing at each school’s respective track – if they had one. 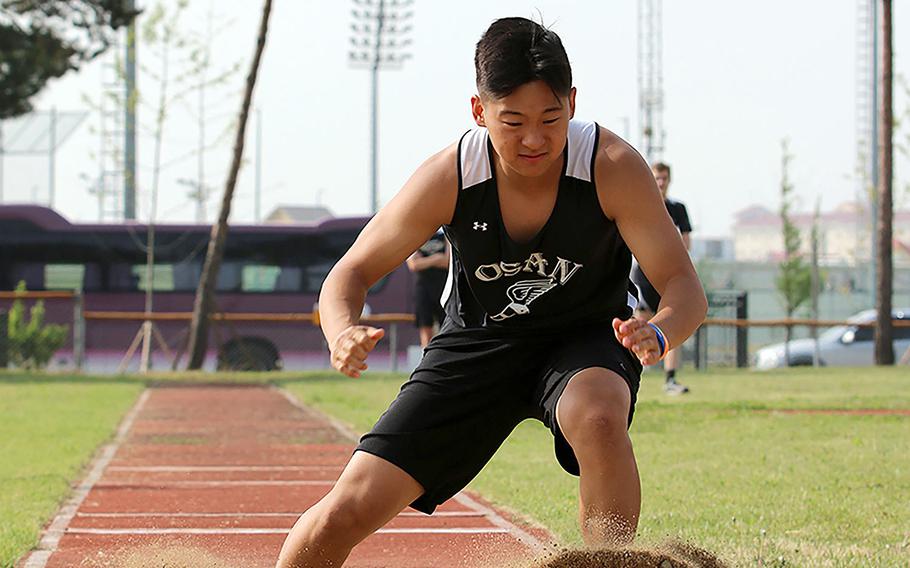 That was not the case for Nile C. Kinnick in Japan and Osan and Daegu in South Korea - schools at bases without regulation tracks. Kinnick ran at Yokota, while Osan and Daegu ran at Humphreys.

Even schools with a track sometimes felt the pinch of command restrictions, Jones said. Her athletes were limited to gatherings of no more than 25, so they spread out practicing events on certain days of the week.

“Honestly, we did not think that we could pull this off at the beginning of the season,” Jones said. “I’m so pleased that it all came together in the end.”

For the first time since the 2011 Far East meet, no Pacific region or meet records were broken.

“Times would have been faster if we were able to run against each other in the same meet,” Humphreys coach Mark Tyler said. “Very interesting meet, when we each had to run separately.”

The meet saw the debut of the triple jump, won by Kadena’s Troy O’Connor and Grace Carey in D-I and Osan’s Edward Kim and Alexis Jeffress in D-II.

Kadena’s Kevonte Speight took the D-I boys 200 and 300 hurdles, and the Panthers teams won the 400 and 1,600 relays. O’Connor also won the long jump, Kadena’s Andrew Wake the high jump and Keith Toncu the 800.

Zama’s girls took the D-II 400 and 1,600 relays, Madison Anderson captured the long jump and the 100 and Theori Lindsay took the high jump.

Among other multiple winners, Yokota’s Aiko Galvin took the D-II 400, 800 and 1,600, after battling a hip flexor injury most of the school year. “Her speed is almost there, but her stamina could get better,” said her father and coach, Dan Galvin.

Trinity Stegall and Antonio Mack were two more Yokota multiple winners in the boys and girls 200 and the 100 and 300 hurdles. Kinnick’s Austin Shinzato ran to victory in the boys D-I 1,600 and 3,200 and anchored the Red Devils’ 3,200 relay-winning team. Osan’s Parker Hendrickson was a D-II boys multiple distance winner, capturing the 1,600 and 3,200.

E.J. King’s Avanni Gardner swept the girls D-II shot put and discus and Osan’s Gregory Lunn did the same for the D-II boys. Humphreys’ Chasity Johnson swept the girls D-I 100 and 200, while Kubasaki’s David Magbagbeola won the boys 100 and 400.