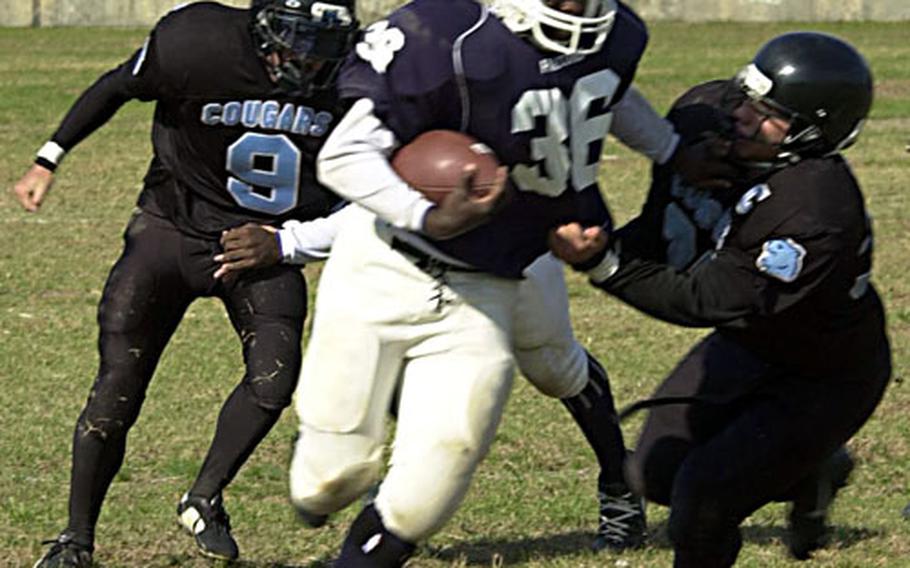 In Japan, Yokota won a battle of unbeatens, defeating American School In Japan 17-7 at Mustang Valley.

&#8220;We struggled with Taegu last week,&#8221; Harden said. &#8220;We viewed the tape and saw that we had problems with downfield blocking. So we went to work in practice on fundamentals and techniques. And it paid off.&#8221;

Smalls carried the ball nine times for 93 yards on Saturday, scoring on a 17-yard run in the first quarter and a 65-yard punt in the second.

Anthony McNeill gained 124 yards on 22 carries for the Panthers while Doug Bloom went 7-for-10 for 107 yards. Kyle Shimabukuro recovered a fumble and Scott Monahan intercepted a pass and returned it 41 yards.

ASIJ got on the board on the first play of the fourth quarter, a 30-yard pass from Shawn Seevers to Ken Gibson. The Mustangs got inside the Panthers&#8217; 20-yard line six times, but two Seevers passes were dropped in or near the end zone.