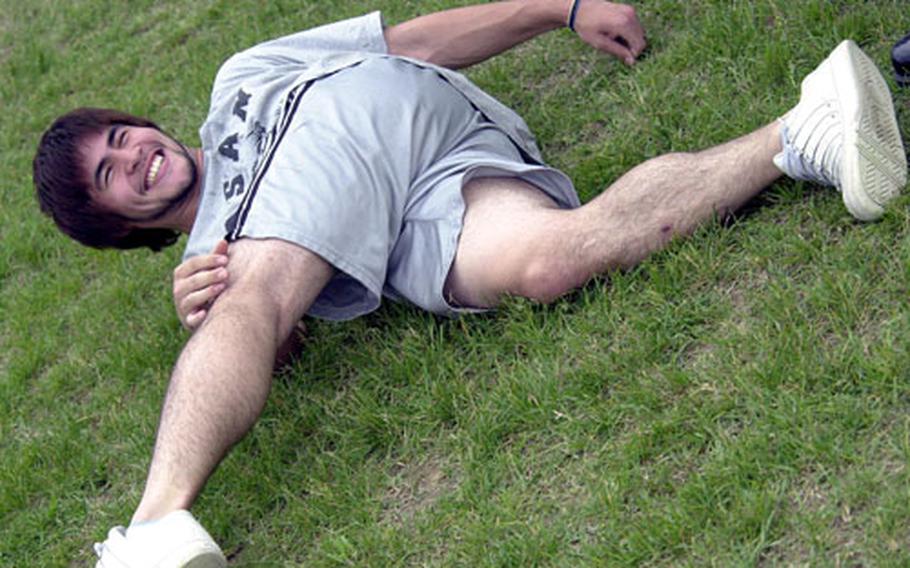 Osan American&#39;s Carlos Albaladejo limbers up during a workout in May at Osan Air Base, South Korea. (Dave Ornauer / S&S)

OSAN AIR BASE, South Korea &#8212; After being named Stars and Stripes&#8217; 2005-06 male Athlete of the Year, Carlos Albaladejo might have shed his supporting-cast persona to become more the Big Man on Campus type.

But even after the Osan American senior&#8217;s breakout football performance in the Cougars&#8217; historic upset of Seoul American on Saturday, Albaladejo, his coach and even opposing coaches say he&#8217;s still the same old Carlos.

&#8220;It didn&#8217;t change the way I am,&#8221; said the three-sport Albaladejo, who captained the Cougars to last year&#8217;s Far East Class A football title and Far East Class A soccer tournament finals and is back to try to repeat the feat.

According to both coaches, Albaladejo is the type who comes along once every five to 10 years and becomes the &#8220;face of the program,&#8221; as Harden put it, an instantly recognizable presence he saw when coaching the Korea All-Star team in 2003.

Alvarado called Albaladejo &#8220;a diamond in the rough. He works hard. He&#8217;s not about his carries or stunting in to sack the quarterback. He&#8217;s about making the team better, harder practices, more hitting. &#8230; One of those kids that every coach would love to have.&#8221;

But the numbers tell the roles he played in boosting Osan to the best football season in school history, capped by the Class A title, and a runner-up finish in the Class A soccer tournament.

At linebacker and safety, he had 17 tackles, 12 unassisted, and averaged 41.4 yards per punt. He made the difference in Osan&#8217;s 16-14 comeback victory over Robert D. Edgren in the football championship Nov. 5, when he kicked a 34-yard field goal, made a key fourth-down defensive stop and recovered a fumble to squelch a late Edgren drive.

After playing basketball his first two years, Albaladejo then tried wrestling, and he placed fifth at 158 pounds in February&#8217;s Far East tournament. He sees the 2006-07 Cougars matmen as capable of having their best season since they won the league in 2000.

As a soccer midfielder, Albaladejo racked up eight goals but it was his playmaking, Alvarado said, that boosted the Cougars to the Class A final, where they lost a heartbreaker 2-1 to International Christian-Seoul.