Football Athlete of the Year 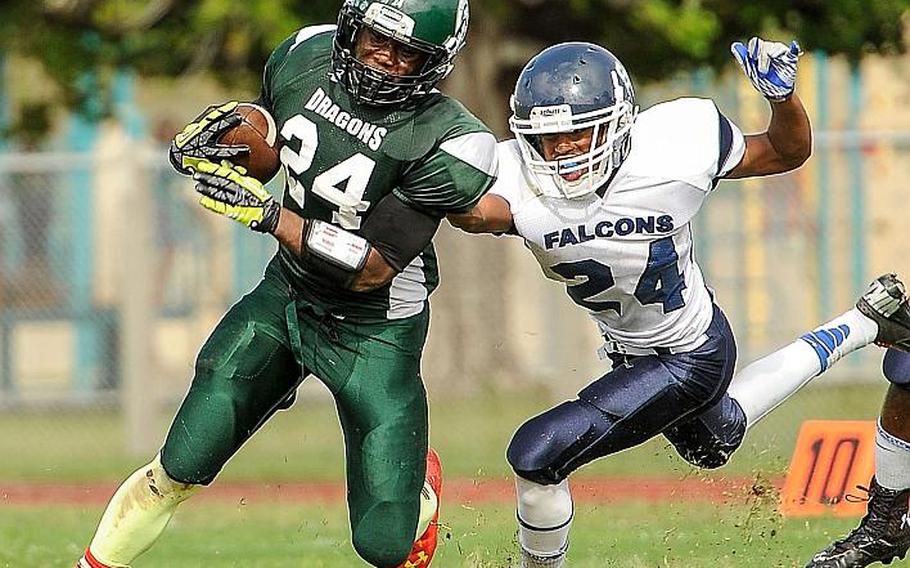 CAMP FOSTER, Okinawa – Fred Bales has coached football for more than three decades, during which time his teams have graduated several prospects into college ball, with two, Penn State’s Michael Haynes (Bears) and Baylor’s Daryl Gardener (Dolphins), making it to the NFL.

Among the hundreds Bales has coached, he calls Kubasaki senior running back Jarrett Mitchell part of “any top 10 in all my 36 years of coaching,” he said.

“He’s an outstanding high school football player, and he’s an even more outstanding human being,” Bales said. “He has a great heart, great spirit, he’s kind, compassionate, he lives life and brightens the day of everybody around him.”

He certainly brightened Dragons football this season, which after two years of Far East Division I runner-up finishes, finally ascended to the top of the heap.

Kubasaki went 6-2 in the regular season – both losses to the Kadena team that Kubasaki edged 34-31 in overtime in the Nov. 9 title game.

Along the way, Mitchell set Okinawa season and single-game yardage records and exits as the school’s career rushing leader in the D-I playoff era, which began in 2005.

In 2½ seasons as a starter, in which Kubasaki won two island titles and reached the D-I title game three times, he garnered 3,990 yards on 357 carries.

“He’s obviously a very gifted athlete in terms of the game’s metrics,” Bales said of Mitchell’s speed, size and athleticism, “but he adds to that a sincere desire to improve on a daily basis. Every game he’s been a part of, he’s made an impact on every one.”

That was apparent on Saturday, when Mitchell sparked a comeback from deficits of 14-6 and 21-14 with a goal-line interception; he was forced to leave the game after taking a helmet-to-helmet hit, but repeatedly tried to re-enter the game.

“That was one of a handful of plays that turned the game around,” Bales said. “He’s a fine student, a fine teammate with a great future in both football and in life. We are certainly going to miss him.”