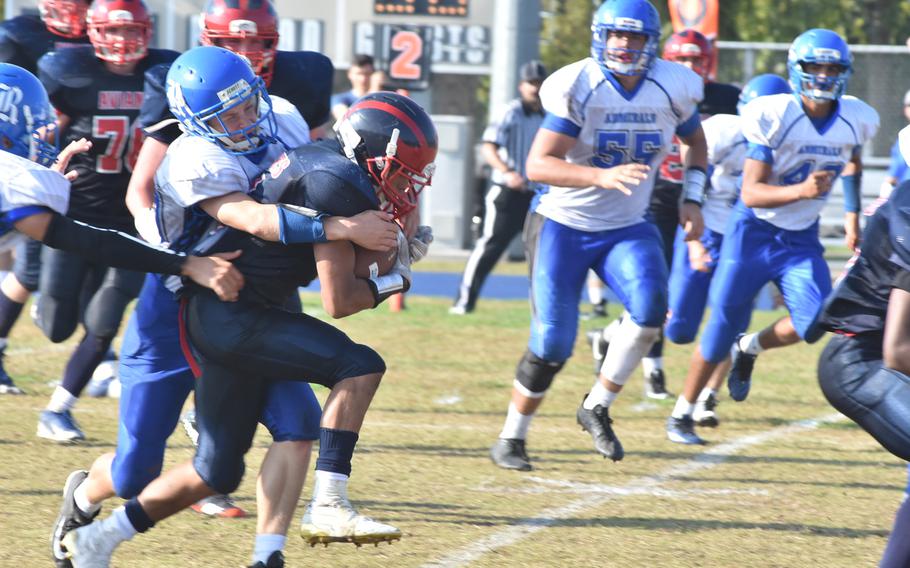 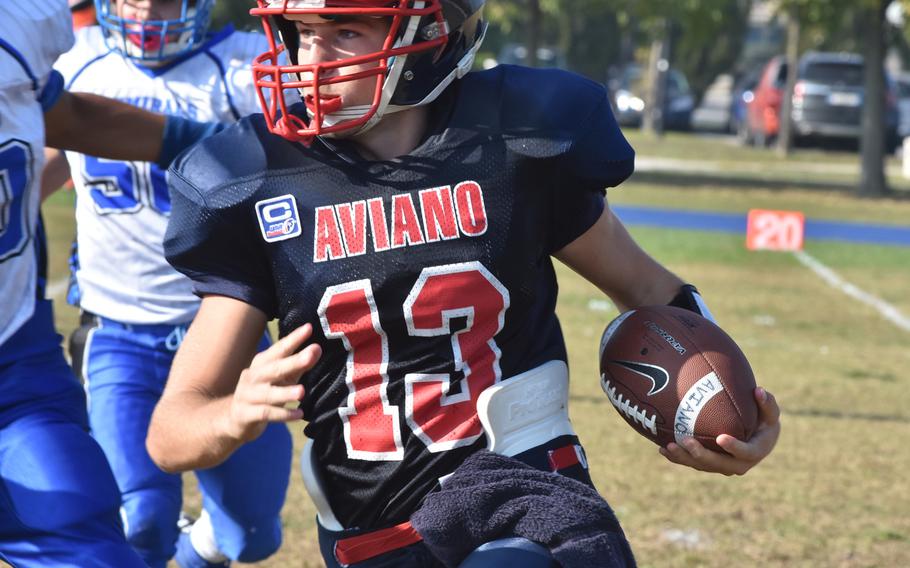 Buy Photo
Aviano quarterback Mason Shine gained only 3 net yards on the ground Saturday, but threw for more than 160 yards in the Saints' 33-30 victory over Rota. (Kent Harris/Stars and Stripes) 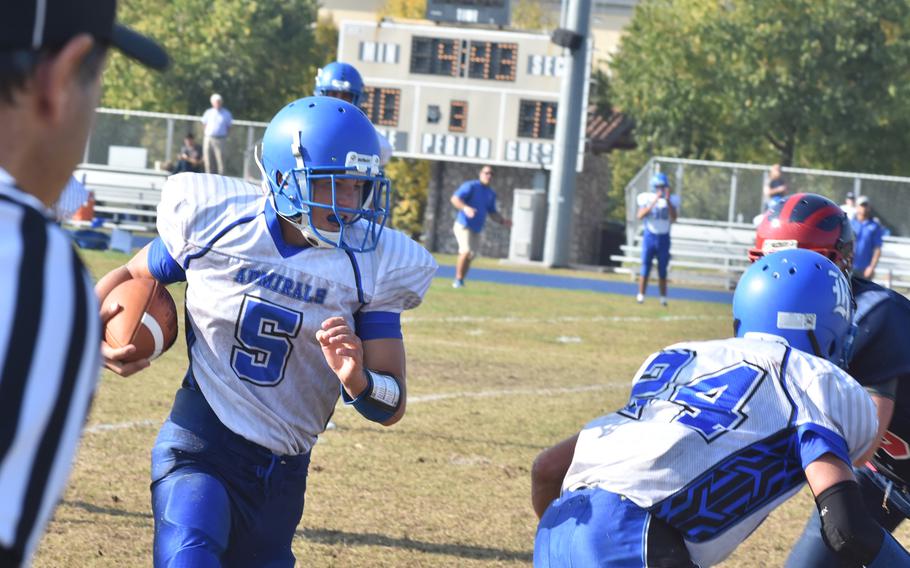 Buy Photo
Rota's James Penta tries to use the block of teammate Brennon Colvin to gain yards Saturday in the Admirals' 33-30 loss to the Saints. (Kent Harris/Stars and Stripes) 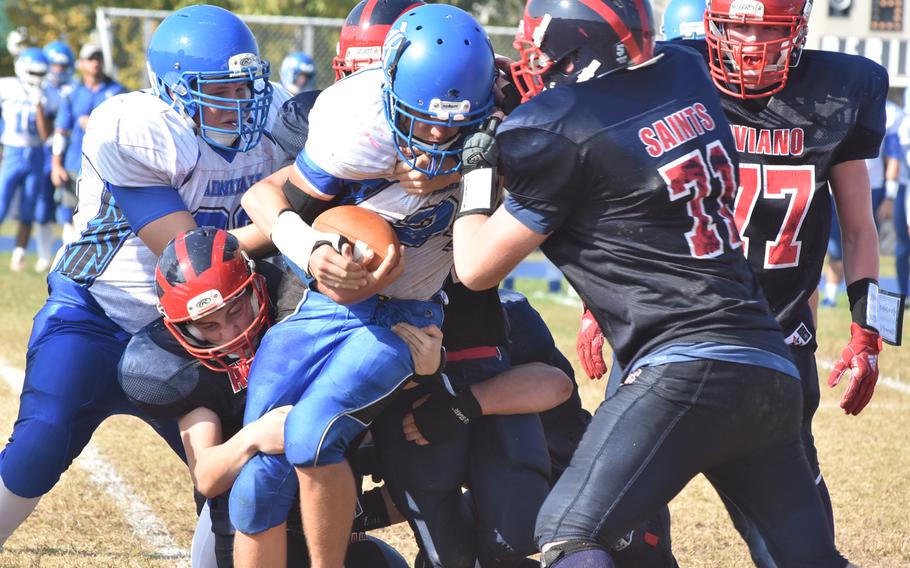 Buy Photo
Aviano defenders stop Rota's Brennon Colvin for a short gain in the Saints' 33-30 victory over the Admirals on Saturday. (Kent Harris/Stars and Stripes) 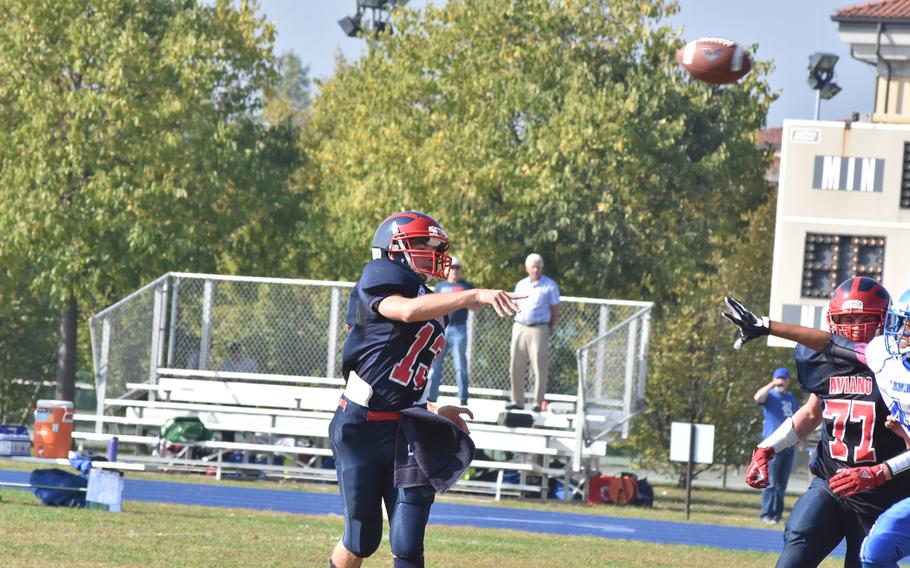 Buy Photo
Aviano quarterback Mason Shine lofts the ball towards a receiver in the Saints' 33-30 victory over Rota on Saturday. Shine completed 11 passes for 165 yards. (Kent Harris/Stars and Stripes) 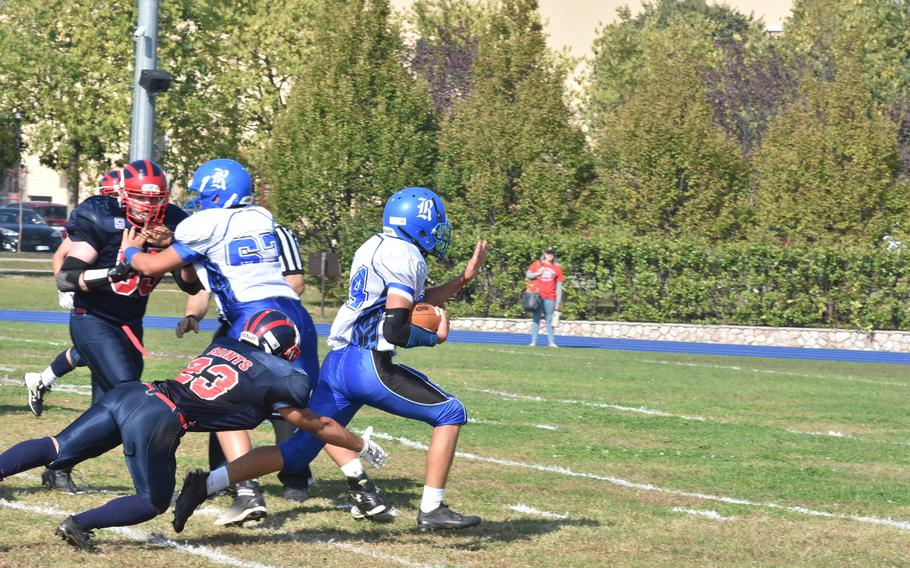 Buy Photo
Rota's Brennon Colvin eludes the tackle of Aviano's Pablo Cervantes on the way to scoring his team's first touchdown Saturday in the Saints' 33-30 victory over the Admirals. (Kent Harris/Stars and Stripes) Buy Photo
Rota's Josh Holmes tries to bring the ball in while Aviano's Donavin Robinson tries to distract him. Holmes couldn't make the catch in Rota's 33-30 loss to the Saints on Saturday. (Kent Harris/Stars and Stripes)

The Aviano Saints had already qualified for the DODEA-Europe Division II playoffs before they suited up. The Rota Admirals still need to defeat SHAPE in their final home game to reach the playoffs. Since Aviano is in the South Division and Rota – the southernmost DODEA school in Europe – is mysteriously in the North, the game had no playoff implications at all.

But all that didn’t appear to matter to the players on the field. The result was a 33-30 Aviano victory in a what might have been the most competitive game in Europe this year. Giacomo Fabbro’s 38-yard field goal with 29 seconds to play kept the Saints’ record perfect with only one weekend left to play in the regular season.

“That was a helluva game,” said Rota coach Ken Walter after watching his team twice rally from two scores down to finally tie the contest early in the fourth quarter. “I think both teams are a little beat up right now.”

Rota, which lost starting quarterback Sam Gallardo in a defeat to the unbeaten Sentinels earlier this season and traveled to Italy without leading rusher Cameron Wilson, looked to be in good shape with the ball and momentum with about 7 minutes left on the clock.

But three straight penalties pushed the Admirals back and then a shanked punt gave Aviano the ball on the Rota 35. Four plays later, Fabbro’s kick sailed just inside the right upright with plenty of length to spare.

“We gave them a short field and they took advantage,” Walter said.

Aviano coach Rick Dahlstrom, whose team didn’t win a game last season, said there weren’t a lot of surprises - thanks to good scouting.

“They were ready for us,” he said. “We knew them and they knew us. That’s why the score was the way it was.”

But whether it was Rota’s 30-hour bus ride from Spain or a bit of uncertainty, the defending champions were put on their heels early. Aviano received the opening kickoff and was in the end zone just more than a minute later as Mason Shine connected with Antonio Perales for a 47-yard pass and then ran in the conversion.

Four plays later, Aviano’s Pablo Cervantes picked off a pass. Six plays after that, it was 16-0 when Cervantes scored on a 9-yard run and added the two-point conversion.

Rota responded with a six-play drive capped by Brennon Colvin’s 13-yard TD run and two-point conversion. The teams traded possessions before Aviano’s Cervantes scored from 3 yards out and added a conversion to put Aviano on top 24-8. They then exchanged turnovers before Rota put together one of the longest drives of the day as Colvin scored from a yard out. The conversion failed and it was 24-14 at halftime.

The Saints struck quickly again in the third, with Perales catching a 9-yard scoring pass from Shine, who completed 11 of 15 passes for 165 yards.

But the weather – unseasonably warm for Aviano in October with temperatures hovering in the high 70s – seemed to have an impact on the Saints in the second half, though Walter said he also thought that many Saints having to play both ways in the intense game probably also contributed. Regardless of the reason, Rota’s runs – particularly several counter plays – started netting longer gains.

Colvin finished with 154 yards on 27 carries for the Admirals, who end the season by hosting SHAPE. Cervantes had 104 yards rushing for Aviano before leaving the game with a sprained ankle in the final quarter. Mickey Moore had most of the burden then and totaled 71 yards.

The Saints host Naples on Saturday. An Aviano win would mean that Rota will be making a return trip to northern Italy for the semifinals. A win by the Wildcats would mean the Admirals would have to drive another six or seven hours down the Italian coast and Aviano would travel to play Spangdahlem.