Alconbury enjoying life back in the win column Brussels’ Jabriel Wells pulls up for a jump shot after driving into the paint against the Alconbury Dragons’ defense on Friday, Jan. 20, 2023. (Kyle Alvarez/Stars and Stripes)

RAF ALCONBURY, England -- Alconbury swept a pair of basketball games Friday night – the first time that’s happened since most of those in the gym started calling themselves Dragons.

The girls beat the Brussels Brigands 34-22 for their second win in a row, a week after breaking a two-year losing streak. The boys followed suit with their first victory in two years, 54-40, over Brussels.

“I felt this past week they were going to have this type of game; they were really stepping up for this game against Brussels,” boys coach Brandon Towns said. “Brussels is a tough team and this win for us will only make our boys look up.” 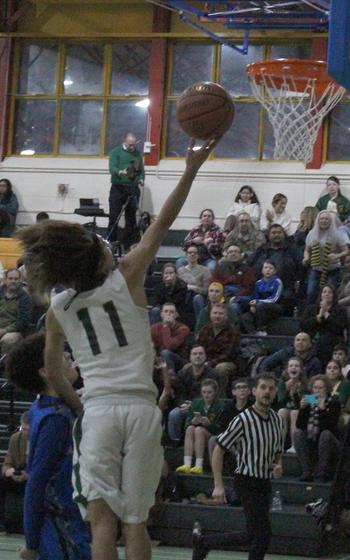 Alconbury's Alfonso Sanchez goes for a finger-roll layup after stealing the ball and going on a break away agianst Brussels on Friday, Jan. 20, 2023 at RAF Alconbury, England. (Kyle Alvarez/Stars and Stripes)

The Dragons then took flight in both games in the third quarter, creating enough distance to hold onto the lead and never relinquish it.

“I told our team captain (Jonathan Reyna) before the second half that we needed some intensity and he came out and put that on his shoulders,” Towns said. “It was his intensity that his teammates matched and gave us that third-quarter push.” The Brussels boys and girls kept within striking distance but couldn’t close the gap in the final quarter of each contest.

“The girls were able to bring that excitement from last week’s win against a very well-coached Brussels team with good fundamentals,” Alconbury girls coach Duke Eidt said. “We’re fortunate to have a team of very talented young girls.” Alconbury's Aspen Williams takes a shot after a break away. Williams was the leading scorer for the Dragons on Friday, Jan. 20, 2023, with 12 points. (Kyle Alvarez/Stars and Stripes)

Alconbury captain Jonathan Reyna prepares for a free throw in the third quarter against Brussels on Friday, Jan. 20, 2023 at RAF Alconbury, England. (Kyle Alvarez/Stars and Stripes)