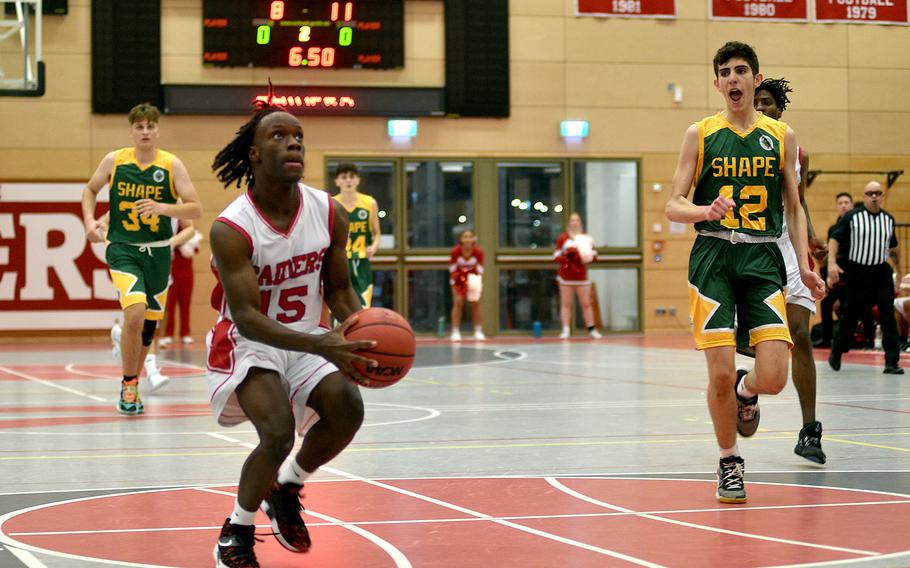 Kaiserslautern's Davis Martin heads up for a layup as SHAPE's Irakitas Manosakis tries to get back on defense during Friday evening's game at Kaiserslautern High School in Kaiserslautern, Germany. Trailing the play, left, is the Spartans' Thomas Tsoulas. (Matt Wagner/Stars and Stripes)

Whether the Raiders are down or up big, he can tell the effort always is there.

Still, midway through the second quarter of their game against SHAPE on Friday evening at home, the Raiders faced adversity they hadn’t seen so far this season. Kaiserslautern trailed by as many as 12 points and had multiple starters on the bench in foul trouble, and the game was threatening to get away.

“We’ve been known to stick together,” Scalise said. “If we have a bad quarter, we’re not going to lay down and die. We’re going to come back and fight.”

And that’s exactly what the Raiders did.

Kaiserslautern erased that deficit and eventually outlasted the Spartans in a 43-41 overtime, come-from-behind victory. The effort created a buzz in the gym from the crowd, which could be felt by the athletes.

“I love the energy and also a very exciting game as well,” Kaiserslautern captain Lena Herrmann said. “We just knew we had to fight until the last second and (then) just kind of a relief when (the buzzer) went off.” 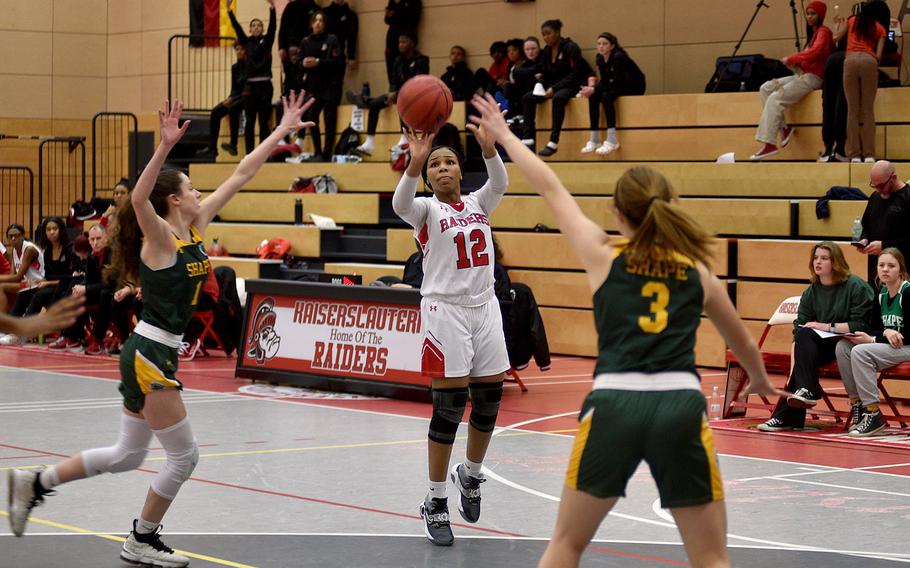 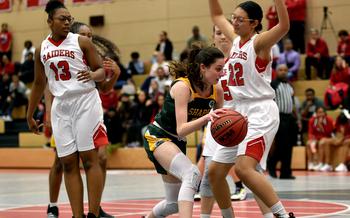 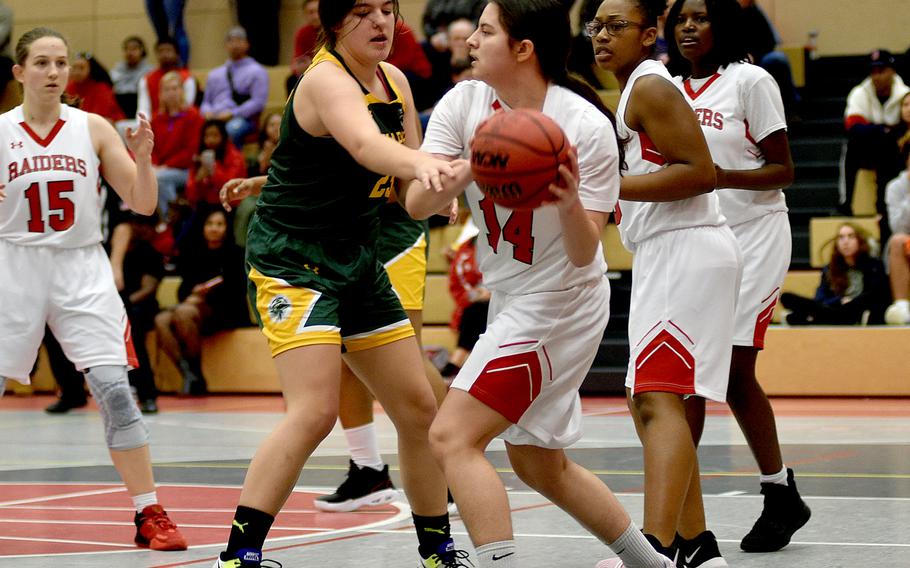 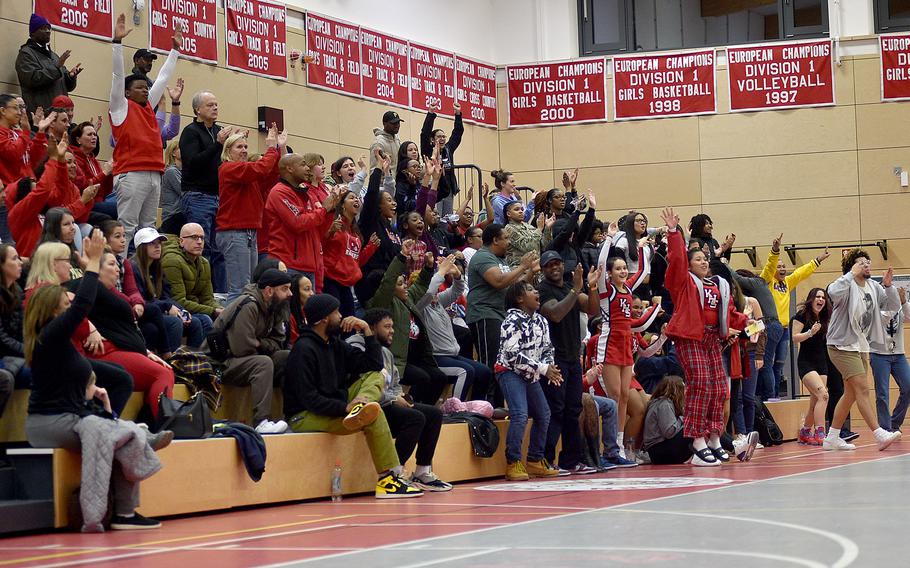 The crowd at Kaiserslautern High School reacts after the final buzzer during the Raiders' 43-41 win over SHAPE on Friday evening in Kaiserslautern, Germany. (Matt Wagner/Stars and Stripes)

The turnaround began after Herrmann knocked down a pair at the charity stripe with 3 minutes, 8 seconds remaining in the first half. The Raiders (3-3, 3-3) went on a 7-0 run to pull the deficit to 21-16 at halftime.

After a slow start to the third quarter, Kaiserslautern went on a 14-0 run over a 4:10 span to take a 33-26 lead with 39 seconds left in the frame. Sophomore Elizabeth Marriott’s 3-pointer at the 2:14 mark gave the Raiders their first advantage since midway through the first quarter.

“Me and my other team captain, Se’maiya (Farrow), we looked at our girls and said, ‘Look, we’re better than this. We have to get back on defense; we’re not going to be cheap about it. We can play better than what that half was,’” Herrmann said. “We told them we got to do better.”

SHAPE (0-4, 2-4) pulled it back in the fourth quarter, and neither team scored over the 3:57 of regulation following a pair of Jessica Moon free throws made it 35-35.

In the extra period, the Raiders and Spartans went back and forth until Herrmann, who had 12 points and eight rebounds, finished a drive to the bucket and was fouled. The senior completed the three-point play to make 42-40 with 43.1 seconds left.

“She’s a bulldog,” Scalise said of Herrmann. “She’s a girl that doesn’t ever want to come out. She’s tenacious. She wants to will the team to win.”

Moon tallied 13 in the first quarter alone, draining a couple of three-pointers and going 5 of 8 from the free-throw line.

Spartan coach Joe Cherrone said his team rued not handling the game well with it had a double-digit lead early.

“We were up by 10, and we pushed the pace too fast and got out of sync,” Cherrone said. “They just outrebounded us in the end.” 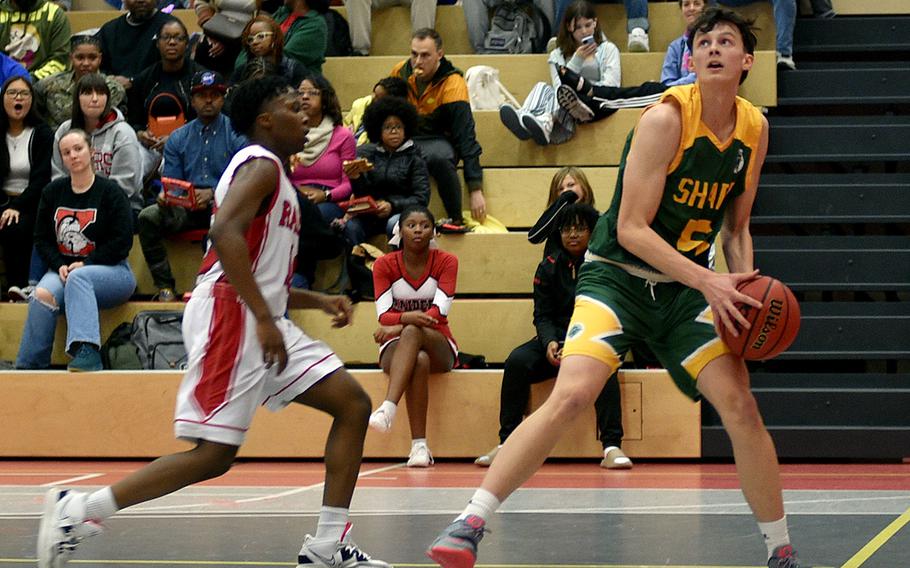 SHAPE's Bela Clobes looks at the basket while Kaiserslautern's Dom Polider tries to defend on Friday evening at Kaiserslautern High School in Kaiserslautern, Germany. The Spartans defeated the Raiders, 48-40. (Matt Wagner/Stars and Stripes)

When next to the home Raiders, the Spartans’ size and length advantage was evident. They have three guys taller than 6 feet, 3 inches, while Kaiserslautern didn’t have anybody that could match them.

“We got a lot of size this year, which we’re trying to make our best out of it,” SHAPE’s Bela Clobes said. “K-Town is not a big team this year; usually they are. We had to take it to our advantage.”

SHAPE’s size and length lends itself to its defensive game plan, which centers around a 3-2 zone.

Clobes sat at the top of the defense, and he helped disrupt the passing lanes into the heart the zone. That forced Kaiserslautern to resort to an aerial bombardment from distance, and it didn’t go well. The Raiders shot 10-of-37 from beyond the arc, including a 7-of-25 effort in the second half. Those marks could have been worse had Kaiserslautern not connected on four of its final six 3-pointers.

“We are a long-legged, long-armed team, and when we’re up and we’re out, it’s a tough thing to play (against),” SHAPE coach David Whetzel said. “When our hands are in the air and we’re forcing guys out beyond the arc, my big guys are happy because they’re turning around and grabbing rebounds.”

Jayden Dayao had the most success against the Spartans, totaling a game-high 16 points with 15 coming on five 3-pointers. Akori Ford added another 11 for the Raiders.

Kaiserslautern coach Andrew Sullivan pointed to SHAPE’s size and improvement as keys to the game.

“It’s tough because you set up for 3s, but then you have no inside presence when it’s hard to get the ball inside,” Sullivan said. “We can shoot better than that.”