Wrestling’s not just a boys club in Italy 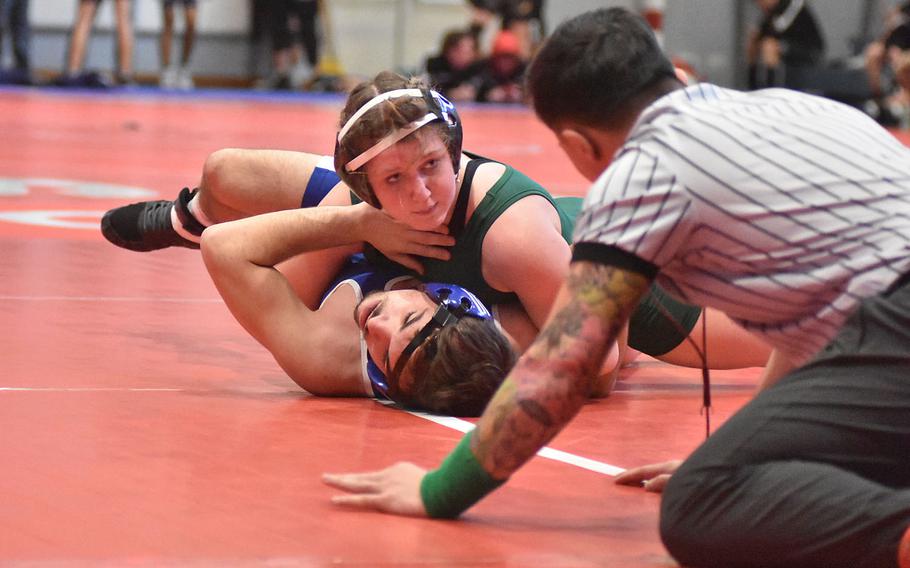 AVIANO AIR BASE, Italy – Audrey Pounds didn’t step foot onto a wrestling mat until she was an eighth-grader.

Now, it’s hard to keep the Naples freshman off one.

“I really found my thing,” she said Saturday after winning all four of her matches at 138 pounds in a five-team wrestling meet at Aviano. It’s the second straight weekend she’s gone undefeated after getting off to a bit of a rough start before the holiday break. Part of that was due to the presence of DODEA-Europe wrestling power Stuttgart at a meet in Vicenza.

Ironically, Pounds would like to follow a path that former Panther McKinley Fielding blazed. Fielding came two points short of a title in 2020 at 106 pounds while becoming the first girl to reach a championship match in DODEA-Europe history.

She might have as good a chance as any of the wrestlers gathered at the home of the 31st Fighter Wing on Saturday. She was one of 18 girls – at least one from each of the five teams – and more than a few impressed.

“A lot of girls and a lot of very good (female) wrestlers,” Naples coach Vito Vitulli said before the meet began. He proved right on both counts. 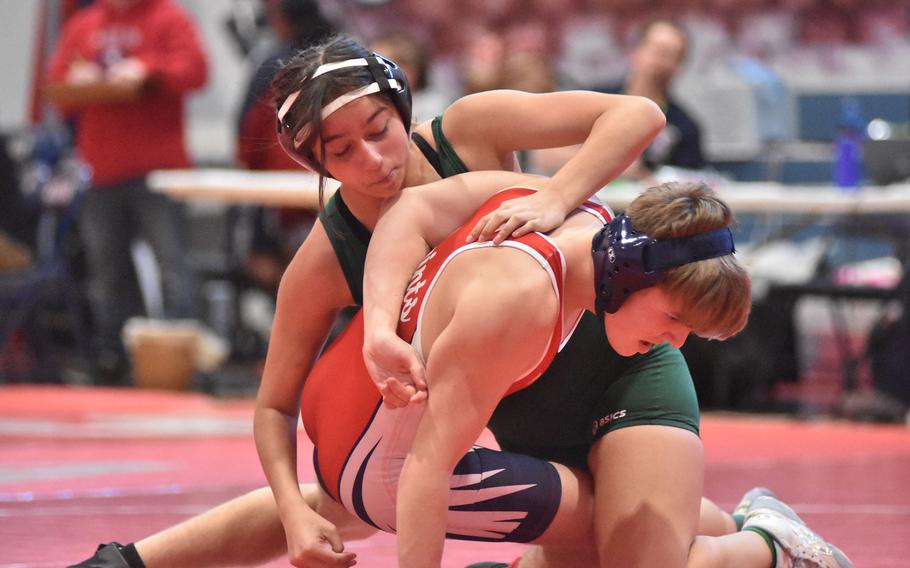 Naples' Jayden Furniss executes a reversal on Aviano's Christian Mack at 150 pounds, but Mack came back to win by pin Saturday, Jan. 14, 2023, at Aviano, Italy. Kent Harris/Stars and Stripes () 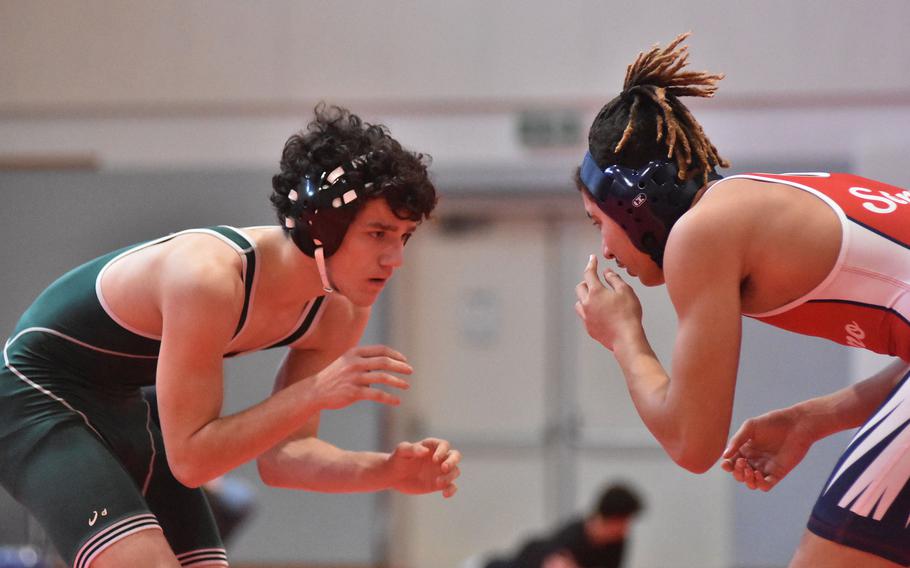 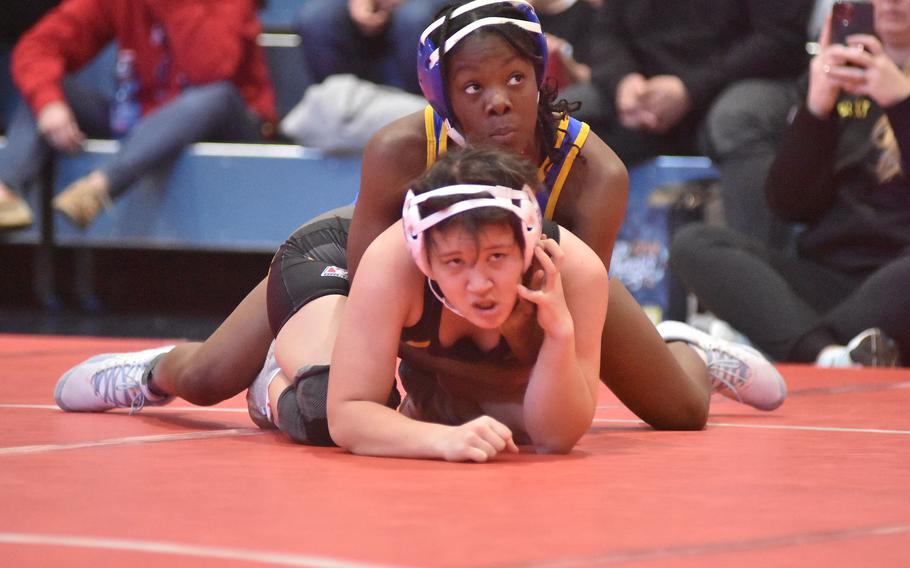 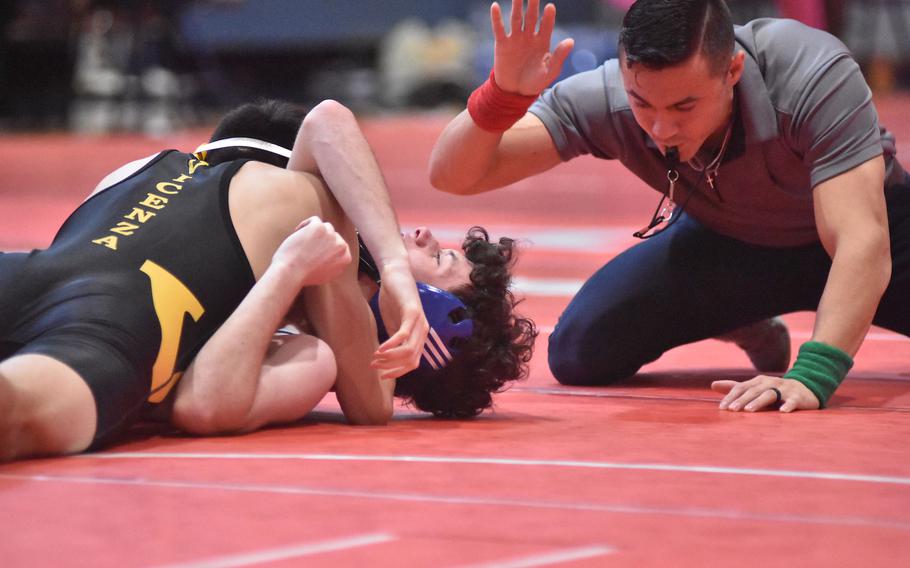 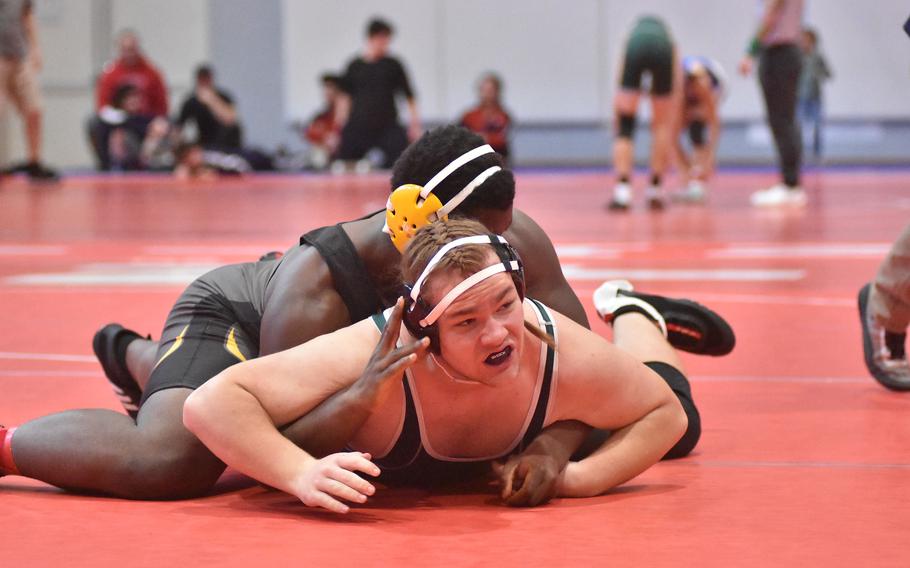 Pounds said she was a swimmer before deciding with a friend to try wrestling. That was partially because she could compete on her school’s JV team as an eighth-grader and couldn’t do that on the swim team.

Her four foes Saturday didn’t have to be convinced. She won twice by pins and twice by narrow decisions over a pair of Aviano wrestlers. She admits she’s at a disadvantage in one way on the mat.

“The only time I lose is when I just get overpowered,” she said. “And I’m not a fan of getting tossed around.”

Pounds said she probably prefers freestyle to the collegiate style employed by DODEA-Europe and high schools and colleges in the States. Her freestyle club took second in a national girls tournament in June before she transferred to Naples. She only has wrestled other girls in freestyle and lost just once.

That’s not an option in DODEA-Europe, though, as the sport is co-ed.

“I’d prefer wrestling girls, but I do want to get better,” she said. “And this is probably helping.”

Vicenza coach Dave Wilder, who saw several of his five girl wrestlers win at least a match, said he’s impressed with the work they put in, saying they have to continually display “mental toughness” against boys who are usually stronger. “They’re very dedicated and committed.”

Like Pounds, Sigonella’s Rickalia Goss is only in her second season. But she finished second at 120 pounds a year ago in Italy and has high hopes this season as well. She won her first three matches Saturday before getting overpowered and pinned by Naples’ Sacha Rosenbaum in the last one.

Goss, a sophomore, still prefers track to wrestling. But she said she isn’t about to back down from a match against anyone.

“For me, it’s about technique and not strength,” she said.

It wasn’t only girls winning Saturday, of course. And several schools were missing a top wrestler or two for various reasons, so there might have been some added incentive to get a chance to finish on top a class.

Wrestlers in Italy will be battling it out twice more in Aviano and once in Naples before the top ones advance to the European finals Feb. 10-11.