With holidays over, it’s time again for hoops 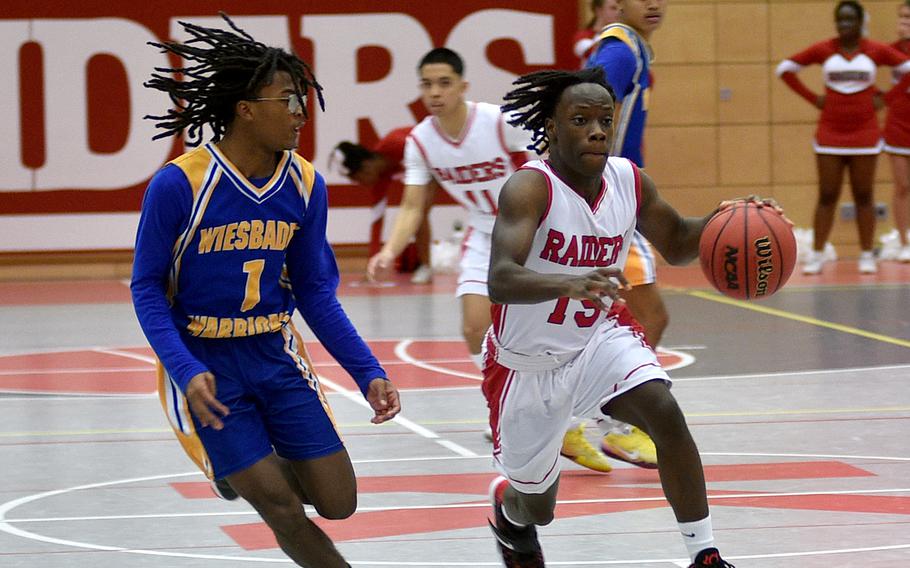 KAISERSLAUTERN, Germany – The winter break wreaks havoc on every team in DODEA.

With two weeks of few practices and no games and players often traveling with their families, teams expect some rust when they return in January.

According to Wiesbaden coach David Brown, the usual issues caused by the pause were compounded by an illness that swept through the team right before the holiday season. It left Wiesbaden with just two practices prior to Friday evening’s game at Kaiserslautern High School against the Raiders.

The time off showed early, as the Warriors struggled but eventually clawed back en route to a 55-43 victory over Kaiserslautern.

“There’s a lot of rust,” Brown said. “I kind of expected it. We had two practices before this game and they weren’t very good practices. So, we kind of tried to focus on getting better and getting all the rust out. I hope we did that.”

Wiesbaden committed eight of its 29 turnovers in the period.

In the second quarter, however, the Warriors returned to the familiar – the full-court trap. It helped turned the game around, as the Raiders went from just two turnovers in the first to eight in the second. That pressure carried over into the second half, with Kaiserslautern recording 16 over the final 16 minutes.

Despite the change in tempo, Wiesbaden didn’t take the lead for good until 1 minute, 53 seconds were left in the second quarter. Jordan Thibodeaux passed to Teagan McConville for a bucket, and the 6-foot-2 freshman completed a three-point play at the foul line to make it 27-24.

The pressure really took its toll in the third quarter, when the Warriors held the Raiders scoreless in a frenetic-paced frame.

“That full-court trap is our bread and butter,” said Thibodeaux, who totaled a game-high 18 points – all after the first quarter. “When we do that, we get energized, we get turnovers, we get fast-break points – all that good stuff. When we do that, that’s when we really turn the jets on; we start to get back in our groove.” 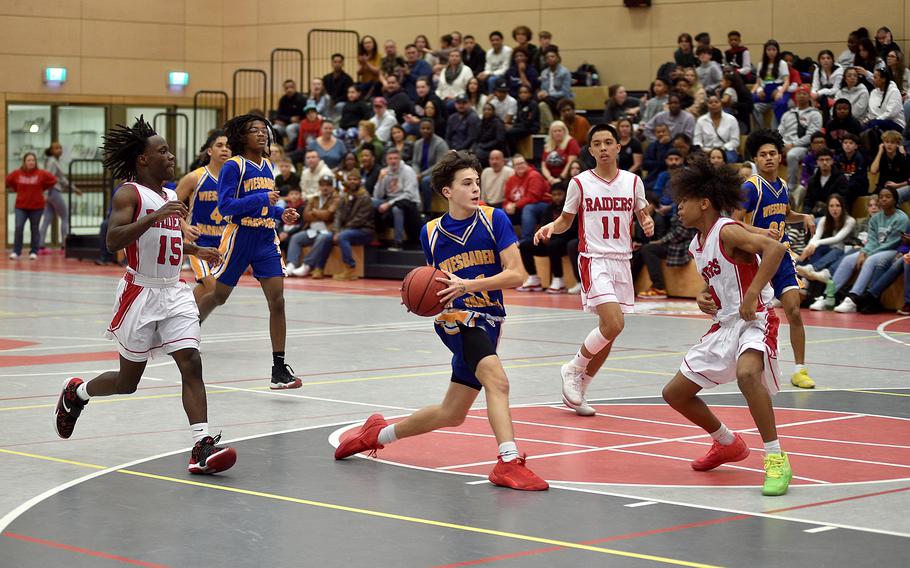 Kaiserslautern's Jayden Dayao goes up for a layup during the Raiders' home game against Wiesbaden on Friday evening at Kaiserslautern High School in Kaiserslautern, Germany. Trailing, from left, are the Warriors' Gavin DeLuca, Teagan McConville and Collin Koschnik. (Matt Wagner/Stars and Stripes) 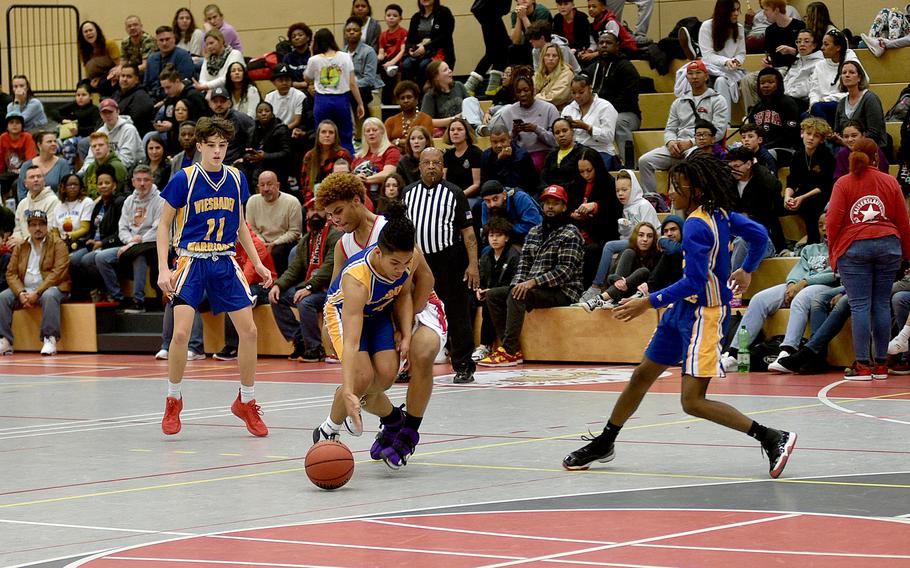 Still, if it wasn’t for one player on offense in the first quarter, the Warriors could have been in a deeper hole.

Collin Koschnik scored all but two of Wiesbaden’s points in the first 8 minutes, and the 6-4 senior center finished the game with a double-double of 13 points and 10 boards.

Brown said Wiesbaden must do a better job of turning to its big man in tough moments like what the team experienced Friday evening.

“It’s part of the rust, us recognizing where we have opportunities to take advantage of,” Brown said. “We’re a young team. We don’t have a lot of experience together, but eventually we’ll figure it out. He’s pretty good. We probably should get him the ball.”

For all the rust Wiesbaden showed, Kaiserslautern seemed to have none early. The Raiders led by many as seven points at the 7:20 mark in the second quarter, before things fell apart.

Kaiserslautern coach Corey Sullivan said his team was motivated out the gates but rued the third quarter, when the Raiders tried to play at Wiesbaden’s pace.

“It’s a long break with DDODS, where they don’t play for like two and a half weeks,” Sullivan said. “So, they were ready to play. They came out, they practiced hard this week.”

The Warriors bounced back after their first loss of the season to Ramstein right before the break. Both Brown and Thibodeaux said the team has a ways to go to return to form.

“It was a little rough in practice coming off winter break,” Thibodeaux said. “Winter break really messed us up. We got to get back on track, get back to where we were and keep getting better.”