When offense fails, defense takes over VICENZA, Italy – After a three-week break from competition, it’s understandable that it might be a little tougher to put the ball into the basket.

So the Vicenza girls and Sigonella boys basketball teams had a similar solution Friday night: Pressure the other team into turning the ball over so many times they don’t have many opportunities to score.

“The good teams in this league put pressure on the ball all over the court,” Sigonella boys coach Jimmy Martin said after his team won 55-28. “That’s what we’re trying to do. We’re not very tall, so we have to do that and run when we can.”

The boys game followed a girls contest that pitted the Cougars’ pressure defense against the Jaguars’ superior rebounding. Defense came out on top 36-23.

Junior Addison Kropp was a one-person wrecking crew in the first half, compiling nine points, five rebounds and five steals as the Cougars took a 20-12 advantage.

“I was really happy with the way we played together as a team,” said Kropp, who finished with team highs of 17 points and 10 rebounds. “I thought we were very aggressive.”

She said she attended all of the team’s voluntary practices during the holidays and also worked out on her own in the gym. Several teammates were members of the school’s Division II champion soccer squad in the spring and she’s looking to follow in their footsteps.

“She never comes out, but I think she was a bit tired at the end,” Vicenza coach Greg DeJardin said.

Neither team got much going in the second half.

“I don’t think we played with the same energy in the second half,” DeJardin said.

Sigonella turned the ball over 36 times and didn’t take advantage of numerous second-chance opportunities despite holding a double-digit advantage in rebounding.

Jaguars coach Michelle Chandler summed up most aspects of her team’s play as “horrible.”

She said getting offensive rebounds was a plus “but we didn’t get any putbacks.

“We just didn’t look like we were in (basketball) shape,” she said. “We’ve got a lot of work to do.” 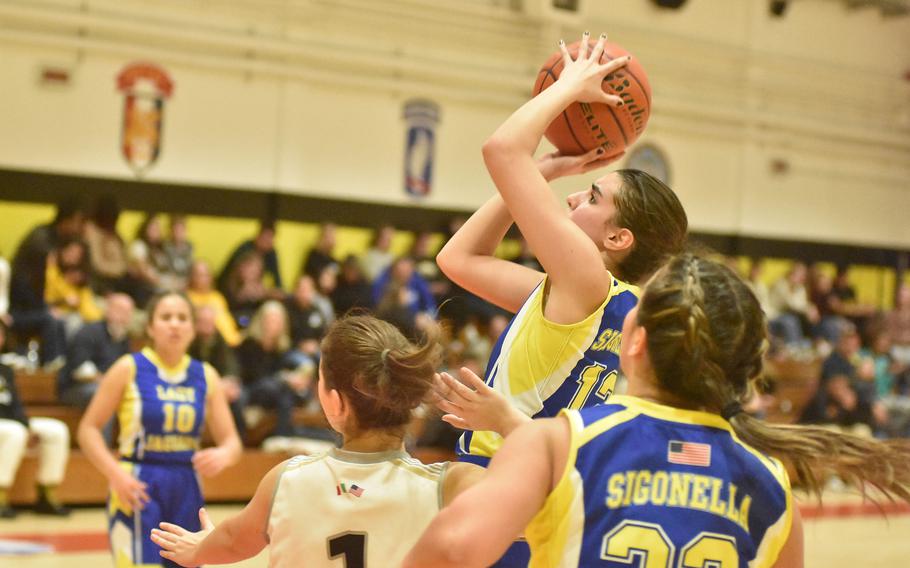 Sigonella's Fabiola Mercado-Rodriguez goes up for a basket Friday, Jan. 6, 2023, in the Jaguars' 36-23 loss to Vicenza. (Kent Harris/Stars and Stripes) 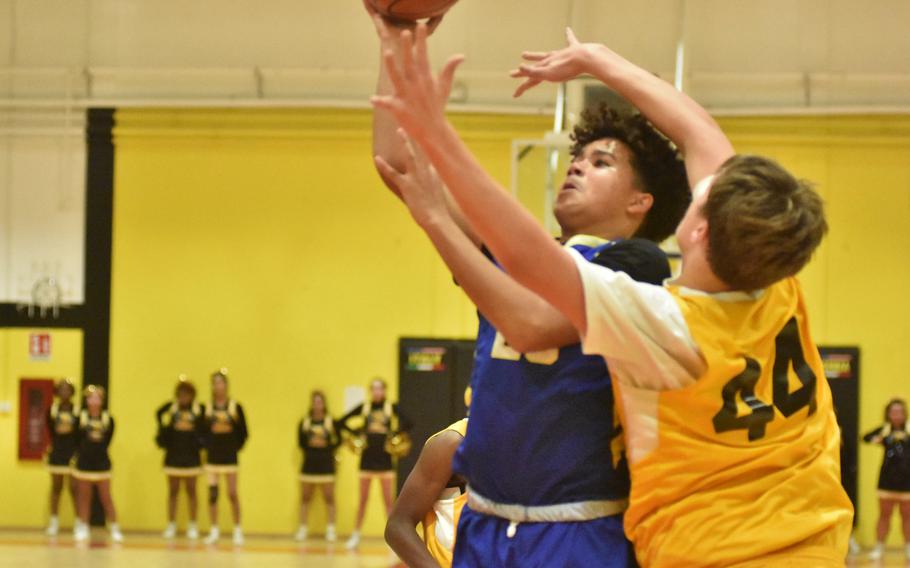 Drake Dawson is fouled by Vicenza's Grady Lester while trying to score Friday, Jan. 6, 2023, in the Jaguars' 55-28 victory over the Wildcats. (Kent Harris/Stars and Stripes) 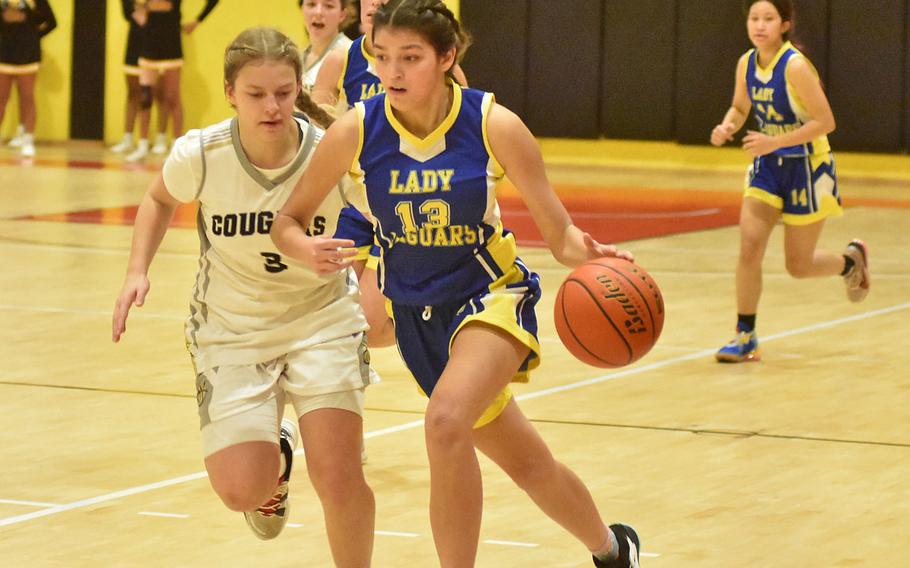 Vicenza’s Mackenzie Blue shadows Sigonella’s Ryleigh Denton down the court Friday, Jan. 6, 2023, in the Cougars’ 36-23 victory over the Jaguars. (Kent Harris/Stars and Stripes) Vicenza boys coach Jesse Woods had much of the same message as Chandler, though the teams are in much different circumstances.

While the Sigonella girls have a strong core of veterans of DODEA basketball, the Cougars only have one player from last year’s team. And there are 13 underclassmen on the roster.

The game was never close after the opening minutes. Sigonella actually took the lead before the game officially started on Alessandro Montero’s free throw after a technical was assessed to the Cougars for a roster irregularity.

Sigonella led 17-8 after one quarter and 35-12 at halftime. The Jaguars’ half-court trapping defense was particularly effective, resulting in an array of Vicenza turnovers and several Jaguars’ layups.

Montero finished with 19 points and hit two of the team’s three-point shots. Jason Taylor, the lone returner from last year’s Vicenza squad, led his team with 10 points and 14 rebounds.

The four teams square off again Saturday on Caserma Ederle.