KAISERSLAUTERN, Germany — Ramstein’s Bralyn Jones listened on the bench between the first and second periods as her coaches urged the Royals to switch their mindset.

The Royals on Tuesday evening were trailing their crosstown rival Kaiserslautern at Kaiserslautern High School after what Jones described as a lethargic start. The wheels for change already were turning in her head as she tuned into her coaches.

“I was really thinking, no matter what’s happening on the outside, no matter what the other team is doing, we have to focus because this is our game,” Jones said. “We can beat them.”

Beat the Raiders the Royals did.

Ramstein exploded in the second quarter and never looked back, defeating Kaiserslautern 50-19. The Royals (4-0) scored 17 points in that quarter and went on a 15-0 run between the 7:30 and 2:53 marks.

A big reason for that explosion was Jones. She tallied 13 of her game-high 21 points in the second quarter, starting with a jumper off a pass from Parker Ingram and ending with a 3-pointer off a pass from Aliyah Jones with 2:53 remaining in the half to make it 17-4.

During that stretch, Jones showcased the Royals’ strong suit: turning defense into offense. She picked Kaiserslautern’s pockets four times over a three-minute span and turned them into four layups on the other end. 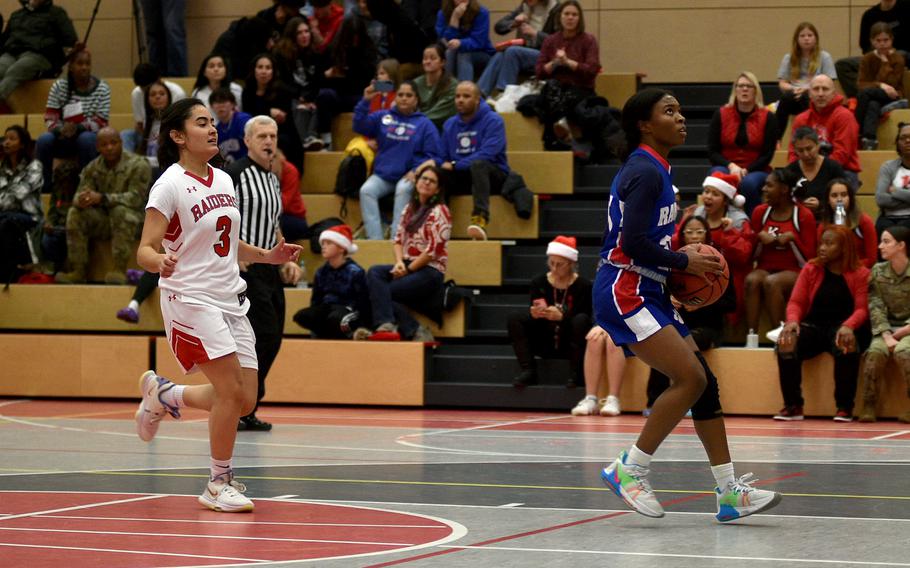 Ramstein’s Bralyn Jones, right, gets ready to go in for a layup during the Royals’ 50-19 win over Kaiserslautern, Dec. 13, 2022, at Kaiserslautern High Schoo. At left is the Raiders’ Kimberly Guzman. (Matt Wagner/Stars and Stripes)

“Bralyn was that spark in the second quarter that got the team going,” Ramstein coach Andrew Short said. “Aliyah Jones followed suit and we just started rolling, getting that pressure and getting it to our game, which is just transition and significant pressure on the defensive end.”

Bralyn Jones amassed 10 steals and turned them into 12 points by the final whistle. Aliyah Jones totaled seven steals and six points, and Katya Von Eiken added 10 points for the Royals.

Bralyn Jones mentioned she hadn’t had much success on the offensive end through the first three games of the season. She said she worked on finishing her defensive efforts by putting the ball in the bucket on the fast break.

“Luckily, my team was there to have my back, so I knew I could go for the steals,” she said. “Recently, I have been slow on the transition and finishing layups, but today, I decided to flip a switch and really focused in as I was getting those fast breaks.”

For the Raiders (1-3), they held their rival to two points in the first quarter and even enjoyed a lead eight-and-a-half minutes into the game.

But turnovers came back to haunt them. Kaiserslautern committed 11 in both the first and second quarters, and they added another 12 in the third frame. The host finished with 38. 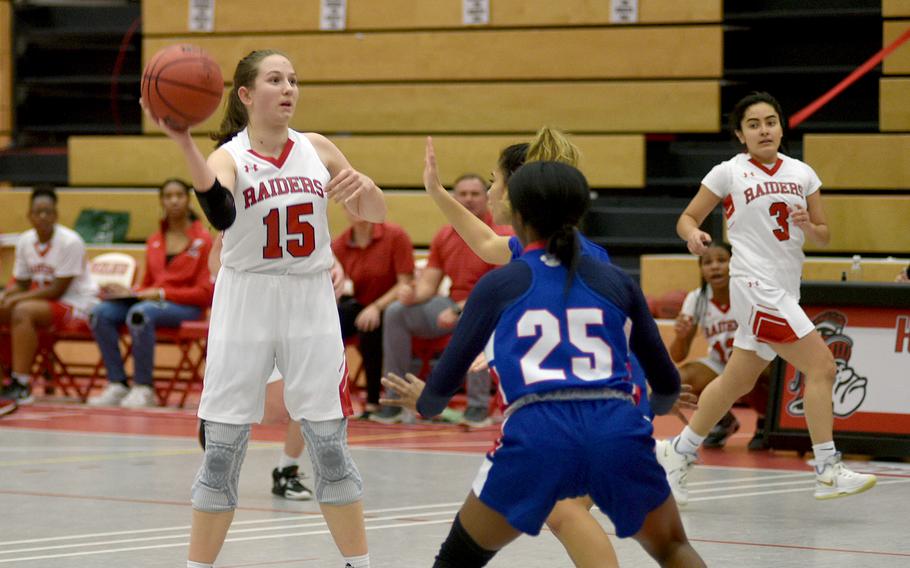 “It was our transition defense that didn’t work well for us — it wasn’t our half-court defense,” Scalise said. “If we can keep teams offensively in the half court, then we’re going to be a better program, a better team.”

While the Raiders head into the winter break, the Royals have one more opponent ahead of them.

Ramstein hosts Wiesbaden in a showdown Thursday. After Tuesday’s win, the coach and players turned their attention to the Warriors.

“Now we got to go home, hydrate, get some good rest, have a great practice to get ready for Wiesbaden,” Short said. “They’re going to be a really good team, so that’s all that’s on our minds now.”