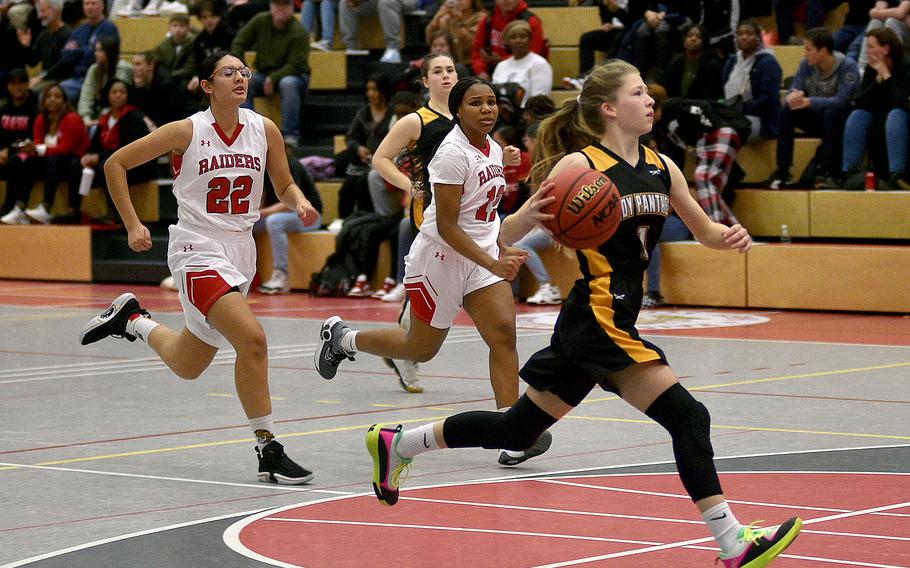 Stuttgart's Haley Wells drives to the bucket on the fastbreak as Kaiserslautern's Emma Arambula, left, and Se'maiya Farrow try to get back during Friday's game at Kaiserslautern High School in Kaiserslautern, Germany. The Panthers defeated the Raiders, 23-14. (Matt Wagner/Stars and Stripes)

KAISERSLAUTERN, Germany – Christopher Jackson had Year 3 on his long-range calendar as when the Stuttgart boys basketball team needed to show progress – not just in the win-loss column, but also in terms of style.

Following Friday evening’s 67-47 win over Kaiserslautern, the coach can say the Panthers are right on schedule. Stuttgart is experiencing its best start in his third season at the helm and even picked up a rare win against the Raiders.

“This is the first time since I’ve been here that we’ve started 3-0, and it’s also the first time we beat K-Town on a Friday night,” Jackson said. “Because I had to come in and build the program, everything’s a first this year.

“We finally have the culture, the team, the players that we want, and everybody’s excited about it.”

It’s easy to see why Stuttgart is so excited. 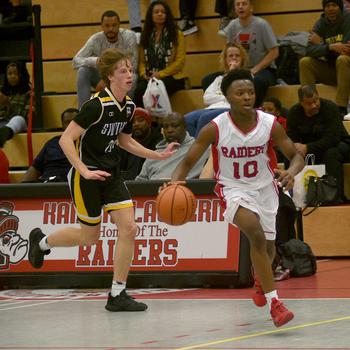 Kaiserslautern's Dom Polider looks up the court while Stuttgart's Jacob Schudel gets back on defense during Friday evening's game at Kaiserslautern High School in Kaiserslautern, Germany. (Matt Wagner/Stars and Stripes) 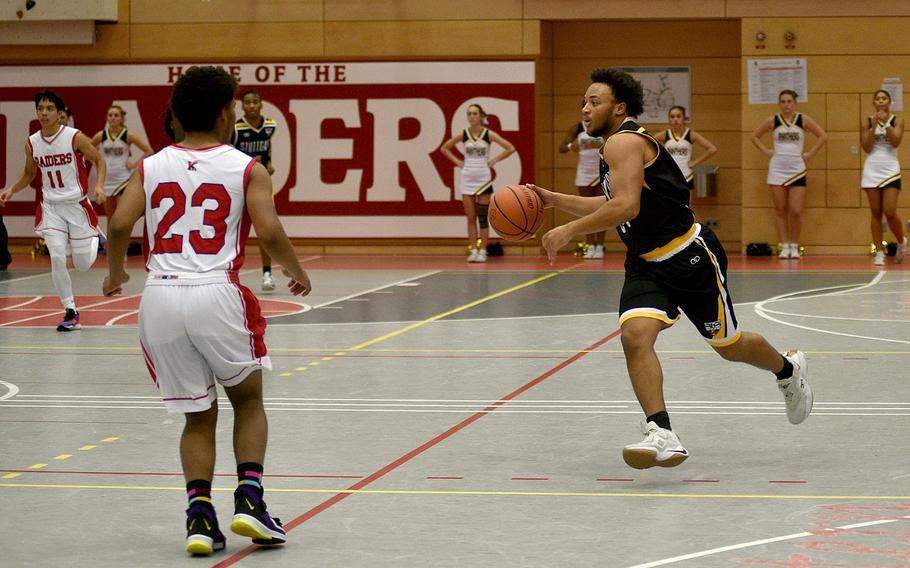 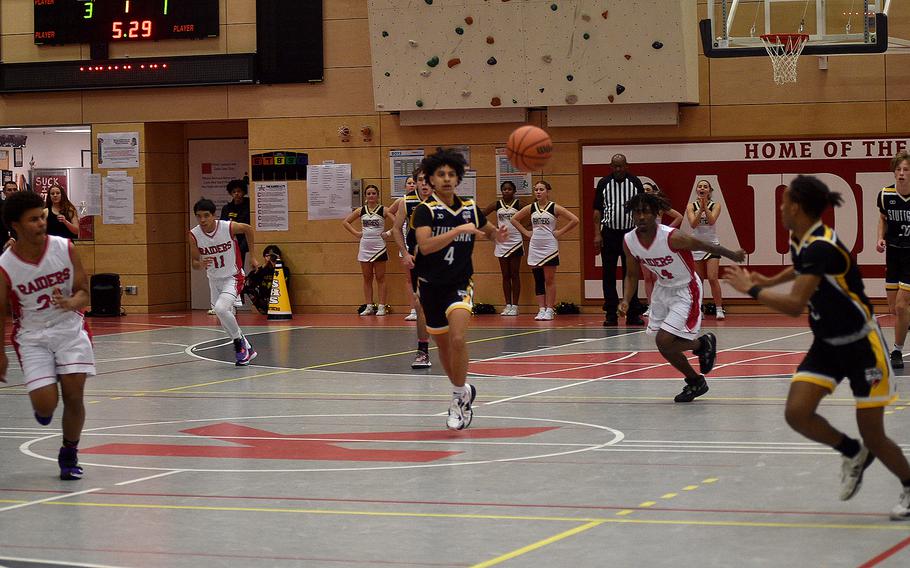 Christopher Jackson was complimentary of his entire team but singled out Anglada-Paz for his performance. The junior guard was firing on all cylinders, draining four three-pointers and scoring eight points off the fast break. He added five boards.

“The last day of the season, he told me walking out of the gym at Ramstein that when we come back, we walk out as champions,” Jackson said of Anglada-Paz. “So, he worked all summer to get to where he is now, and now it shows on the court.

“This is the talent level he has. … Because he also hangs his hat on defense, I assure you he is going to be an all-DODEA player.”

Anglada-Paz (four steals) wasn’t the only Panther make an impact on defense. Stuttgart forced Kaiserslautern (1-1) into 26 turnovers, including 12 in the first quarter.

The Panthers deployed an aggressive style, whether it was a man-to-man, full-court defense or trapping in a zone. Anglada-Paz said it suits his playing style well.

“I consider myself one of the best defensive players in DODEA,” he said. “I got to put my big boy pants on and get the job done when it comes to defense.”

After adjusting to the Stuttgart pressure, the Raiders got something going on offense, especially in the third quarter.

Kaiserslautern posted 18 points in the frame, which was one point more than it had scored in the first half. Akori Ford helped lead the way in the period, scoring six of his team-high 13 points.

Coach Corey Sullivan said the Raiders will face growing pains, but he was pleased with their fight in the second half.

“We’re still learning a lot, and I’m glad my kids fight,” Sullivan said. “They have to learn how to play basketball together. … They started performing, which is what we want them to do.” 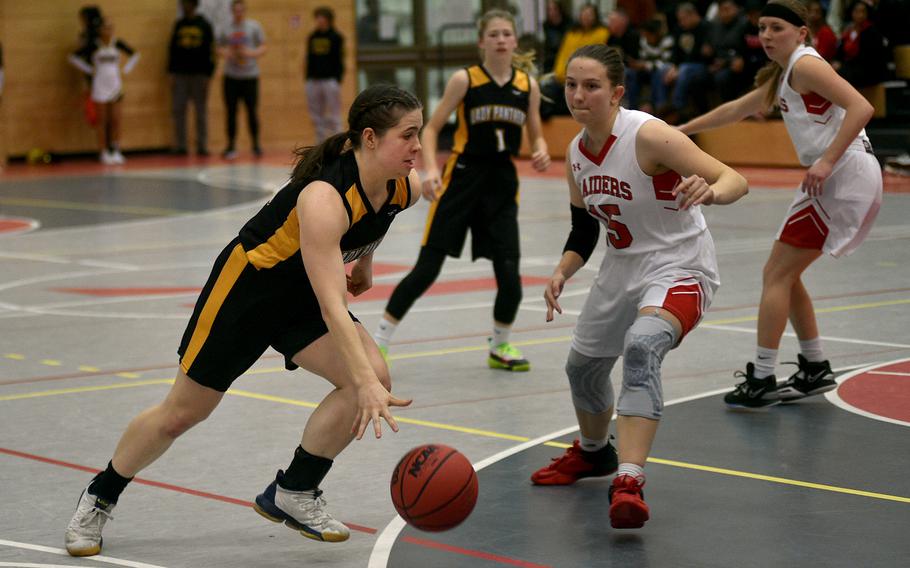 It’s hard to be upset about starting the season with three straight wins.

Stuttgart girls basketball coach Robin Hess has found some reasons to temper the excitement, though. Sure, the Panthers stayed unbeaten with a 23-14 win over the Raiders, but the Panthers also showed some things their coach said needs improvement.

“We have a long way to go,” Hess said. “I see some really good things; I see some things we need to work on. I’m not disappointed with 3-0, but I know we have lot of areas to improve.”

Shooting is one of those areas. Stuttgart went 10-of-52 from field. Combined with 21 turnovers, the Panthers struggled to get much going offensively.

But as the saying goes, sometimes the best offense is a good defense.

Stuttgart forced Kaiserslautern (1-1) into committing 30 turnovers with 17 going down as steals. Senior Bella Henderson corralled eight steals herself, and she turned a number of those into her six points. Junior Ella Kirk added another seven points.

Henderson described how important the defensive performance is when the offense is struggling.

“It shows us that not only is our defense super important when our offense isn’t clicking, but also not to give up, not let us get down on ourselves,” Henderson said.

While crediting the Stuttgart defense for the Raiders’ offensive issues, Kaiserslautern coach Aaron Scalise also pointed out the number of high-percentage shots the Raiders missed in the game.

“There’s some things that we definitely have to work on,” Scalise said. “We’re a better defensive squad than we were last year, but offensively, we’ve got some things we need to work on.”