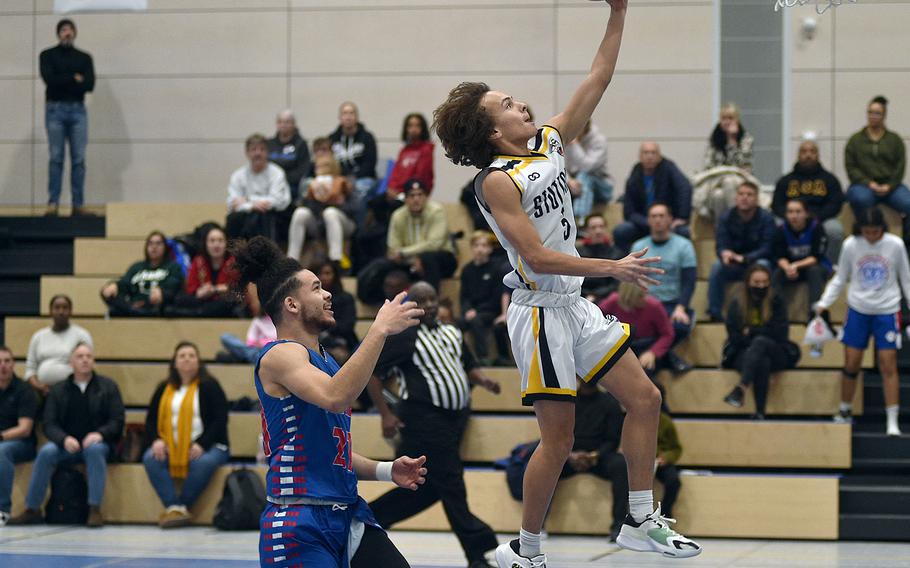 Stuttgart's Ryan Stevenson goes for a layup while Ramstein's Israel Rouse trails during a game at Ramstein High School on Saturday afternoon on Ramstein Air Base, Germany. The Panthers won, 55-43. (Matt Wagner/Stars and Stripes)

RAMSTEIN AIR BASE, Germany – Every team has an opponent it sets as the bar.

The Stuttgart boys basketball and the Ramstein girls basketball teams look no further than the defending DODEA European Division I champions – Ramstein on the boys side and Stuttgart on the girls side.

When the two schools duked it out Saturday afternoon, both reached that bar. The Panther boys handed the Royals a loss on their home gym, 55-43, while the Ramstein girls handed Stuttgart its first loss of the season, 47-35.

“Ramstein will always show you where you really are,” Stuttgart boys coach Christopher Jackson said. “Sometimes you play them and you get blown out and sometimes it’s close, but very seldomly do you beat ’em. So for us to come in here and pretty much control the game is a testament to the work our kids put in.”

The wins have both squads expanding expectations as to what they can accomplish later this season. It also comes at a good time, with winter break on the horizon.

“We just beat the last champs, and they seem to have a really good team,” Ramstein’s Katya Von Eiken said. “They’re very well disciplined, and that we just beat them shows that we can (hang) with all the teams.” 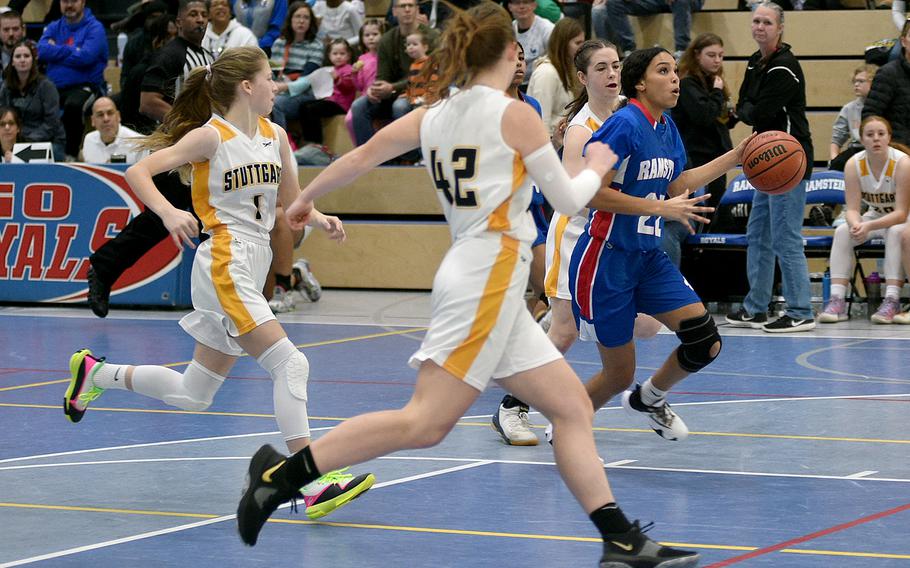 Ramstein's Aliyah Jones drives to the bucket on a fas break during the Royals' 47-35 win over Stuttgart on Saturday at Ramstein High School. Defending are Panthers, from left, Haley Wells, Anna Thompson and Bella Henderson. (Matt Wagner/Stars and Stripes) 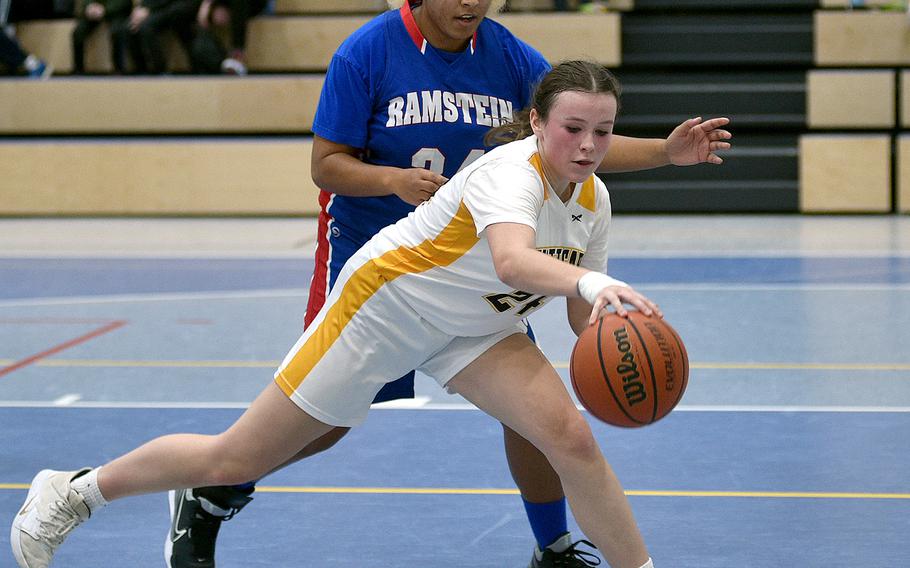 Stuttgart's Ella Kirk and Ramstein's Alysha Edwards battle near the basket during Saturday's game at Ramstein High School on Ramstein Air base, Germany. The Royals defeated the Panthers, 47-35. (Matt Wagner/Stars and Stripes)

Ramstein needed its bench to turn up against the Panthers on Saturday afternoon.

The Royals (3-0) got those performances from the substitutes and had other starters make key plays down the stretch.

“We knew that this was going to be a big test, and we just stuck to our game plan, trusted ourselves,” Ramstein coach Andrew Short said. “We got in early foul trouble, but we overcame that, had some key contributors off the bench.”

Two of those players were guards Parker Ingram and Solymer Brown. The young wing players contributed with five points each.

They stepped in for much of the third quarter, as Edwards picked up her fourth foul at the 4 minute, 33 second mark and Jasmine Jones was whistled for her fourth barely a minute later. Despite these absences, Ramstein pushed its lead out to eight points by the end of the third and made it a 10-point advantage with 7:01 remaining in the fourth quarter following a Van Eiken drive.

“It gave me more confidence in my team,” said Edwards, who had 10 points and six rebounds. “More trust in my teammates, knowing that they can handle their own against the other team’s starting five.”

In the fourth, the Panthers (3-1) made a run, and eventually pulled it back to 37-31 with 5:12 remaining. That’s when Van Eiken scored on a pair of drives to put the game out of reach.

“In the first half, I was a little bit cold, but then in the second half, I started making shots when it was important,” said Von Eiken, who totaled 12 points and eight rebounds. “Even the people who were in foul trouble ended up having a really good second half, and we did what we needed to do.”

Despite the loss, Stuttgart coach Robin Hess praised her team for their performance over the previous evening’s win over Kaiserslautern. Ella Kirk paced the Panthers with 15 points and 10 rebounds.

“I didn’t know which way it was going to go, but I am not disappointed that we lost,” Hess said. “This was good for them. They improved on things that we talked about (Friday). There’s still some things we can improve on, but I cannot be disappointed with how they played today.” 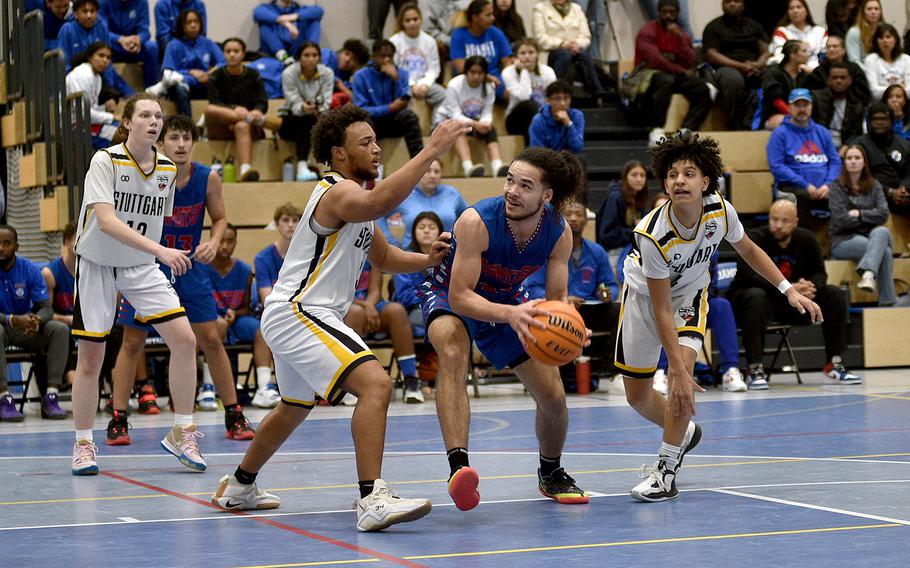 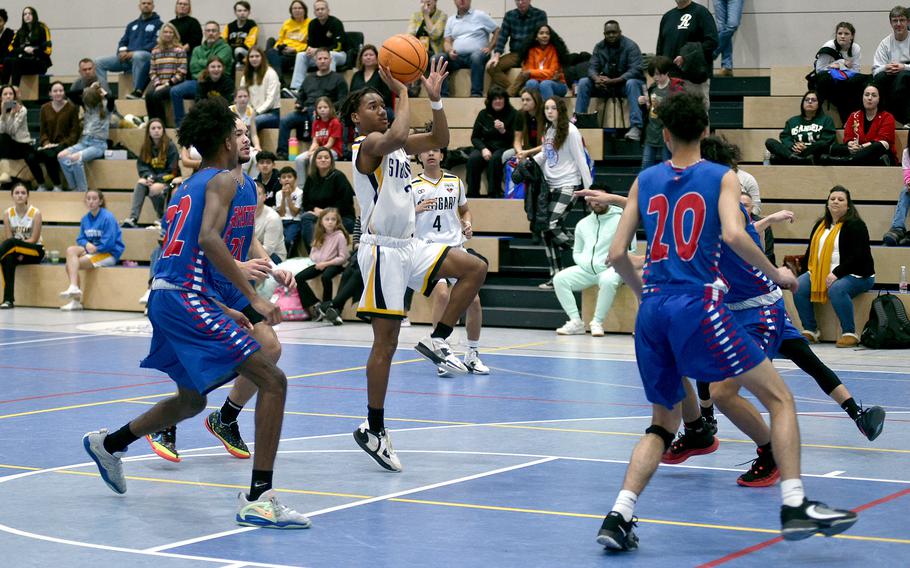 Stuttgart's Tyler Jackson puts up a floater during the Panthers' 55-43 win over Ramstein on Saturday afternoon at Ramstein High School. Defendiers include Samuel Udoaka, left, and Dominic Brooks. (Matt Wagner/Stars and Stripes)

The Panthers didn’t forget the 17-point shellacking the Royals gave them in their opening game at last year’s championships.

Just 10 months later, Stuttgart got its revenge with a 12-point victory on the same floor. The Panthers (4-0) led for all but 2:07 during the middle of the second quarter.

“Last year, when they embarrassed us our first game at Euros here, we felt it, and we took that all the way through to now,” Trenton Jackson said. “Now, we made a statement to DODDS that we are here and we’ve got the team.”

One day after Ismael Anglada-Paz led Stuttgart in scoring, it was the Jackson brothers’ turn. Trenton Jackson led the way with 20 points, including 15 in the first half. Younger brother Tyler contributed 16 points.

For their coach and father, it’s not the first time he has been at the helm of a team with so many weapons. The last time Christopher had that options, however, it was nowhere near as successful as this year’s squad.

Known for its aggressive defense, Stuttgart faced a taste of its own medicine in the fourth quarter as the Royals (2-1) tried to erase a double-digit deficit.

The Panthers had their own remedy for it, though. They engaged in a stall offense across all four corners of the half court with very few turnovers, letting the clock tick away. All three Jacksons said it was an improvement over similar situations over previous campaigns.

“Last year, in our loss against Wiesbaden, we were just throwing up shots and not really used to holding onto the ball and trying to get a win,” Tyler Jackson said. “So, a lot of this here was just discipline.”

Ramstein, meanwhile, still has high hopes after losing just two players from last year’s championship squad, one of which was a starter.

Coach Brendan Rouse said the loss might be the jolt the Royals needed. He said they need to be more disciplined when it comes to their offensive sets, especially after the midway point in the second quarter.

“I think it was a good wake-up call for us,” Rouse said. “Basically, they got knocked off their pedestal. Now they know that it’s not going to be handed to them. They got to get out there and get back to work.”

Israel Rouse recorded a double-double with 16 points and 11 boards, and the coach praised the defensive play of Braden Laidlaw in the losing effort.