Two steps forward, one step back ... 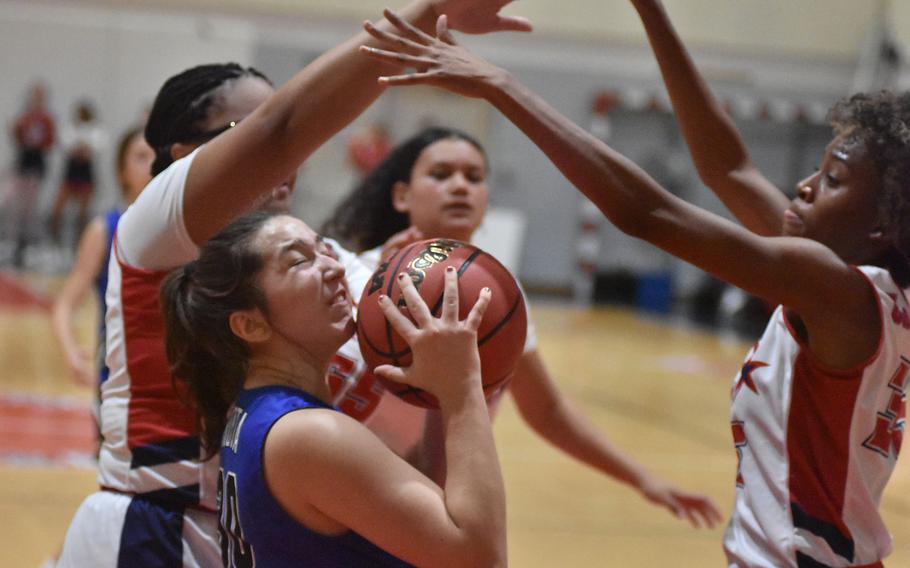 Rota's Maddie Lewis is cut off from the basket by the long arms of Aviano's Alayna Williams, left, and Lania Burkes on Friday, Dec. 9, 2022, in Aviano, Italy. (Kent Harris/Stars and Stripes)

AVIANO AIR BASE, Italy – Ask a coach to evaluate his or her team two weeks into the basketball season and you’ll likely get a different answer every few minutes.

The only thing consistent at this time of year is mistakes that coaches hope their teams won’t be making at DODEA’s European championships in February.

“We’ve got a group of girls who have grit and they’re fast,” Rota girls coach Edward DeMeritt said Friday night after the Admirals fell 30-16 to the host Aviano Saints in a game featuring more than twice as many turnovers as points. “It takes time. It takes experience. You just watch. We’ll get there.”

The boys game looked like both teams were a bit closer to being there, though there were plenty of rough patches as well.

“We’re building to be the best we can be in February,” Rota boys coach Ben Anderson said after watching the Saints snap the Admirals’ 25-game winning streak with a 51-40 victory. “So this (kind of game) is good.”

Aviano coach Keith Adams called the intensity of the game “kind of like tournament basketball, though maybe down a notch or two.

“We’re just trying to get better each week. The ultimate goal is to be ready at the tournament.” 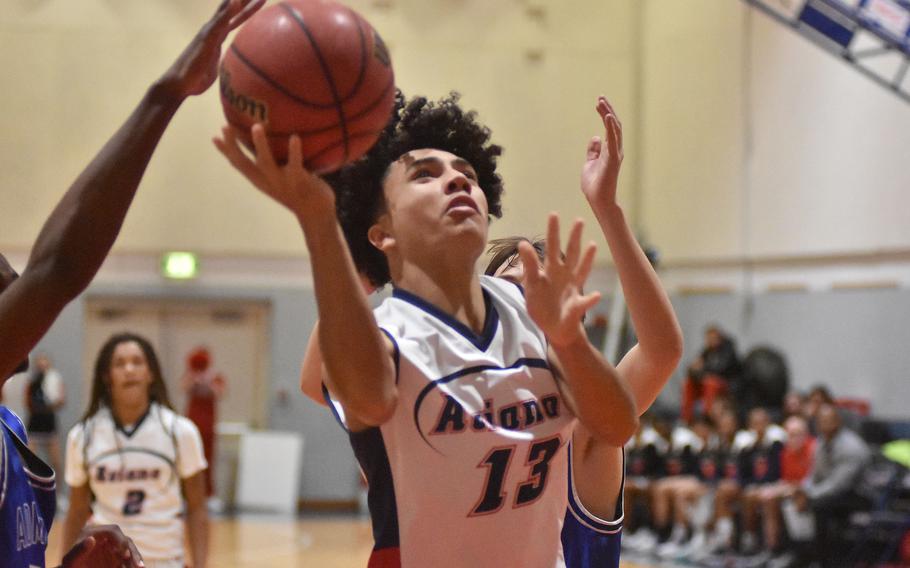 Aviano's Malakai Harkley manages to just get a shot off near the basket on Friday, Dec. 9, 2022, in the Saints' 51-40 victory over Rota in Aviano, Italy. (Kent Harris/Stars and Stripes) 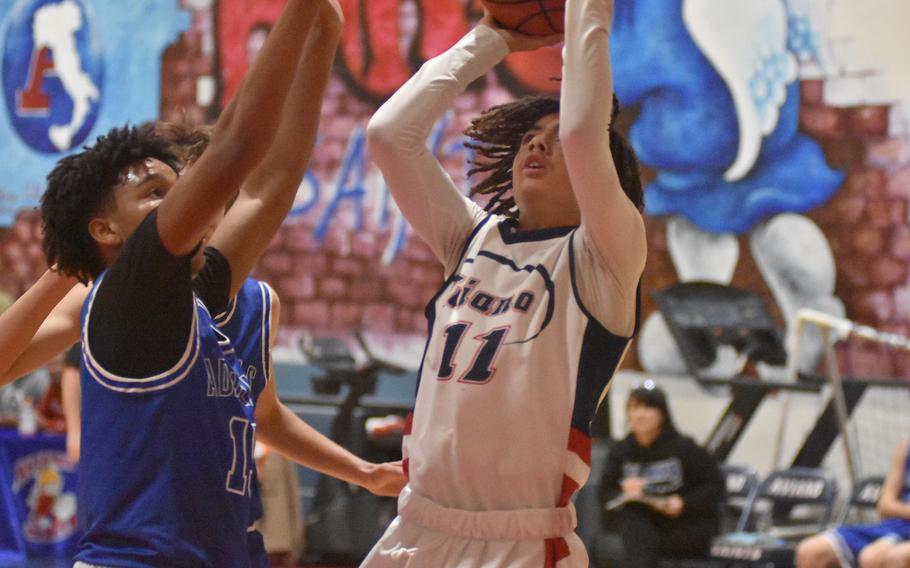 Aviano's Sergio Melendez puts up a shot before Rota's Anthony Ross can close on him in the Saints' 51-40 victory over the Admirals on Friday, Dec. 9, 2022, in Aviano, Italy. (Kent Harris/Stars and Stripes) 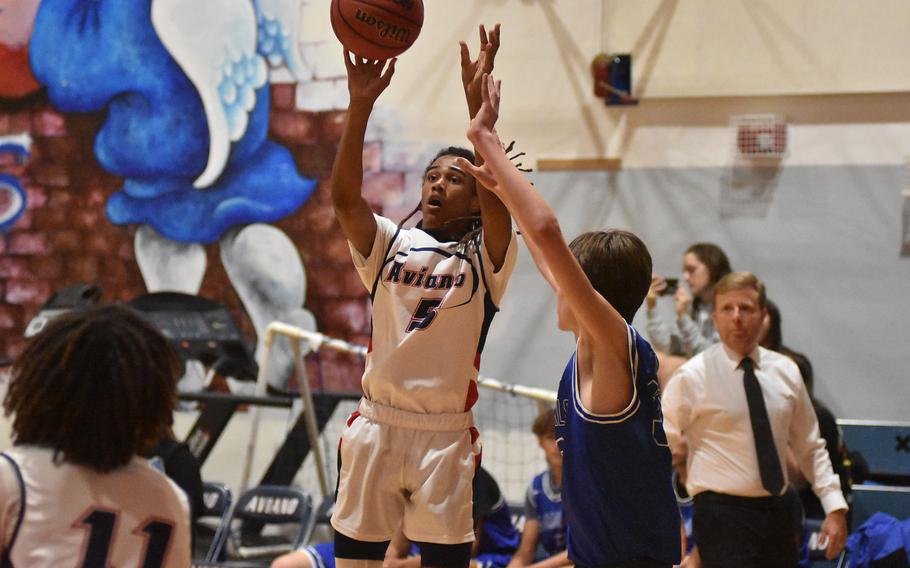 Aviano's Deon Walker shoots before Rota's Hampton Brasfield can get close enough in the Saints' 51-40 victory over the Admirals on Friday, Dec. 9, 2022, in Aviano, Italy. (Kent Harris/Stars and Stripes) Rota's Tyler DeMeritt had four blocks on Friday, Dec. 9, 2022, but couldn't get to this shot by Aviano's Andrew Walker in the Saints' 51-40 victory over the Admirals in Aviano, Italy. Rota coach Ben Anderson, watching the play, saw his team's 25-game winning streak snapped. (Kent Harris/Stars and Stripes)

It was a game of runs in the second half and the Saints had the last one. Rota outscored Aviano 16-4 at the end of the third quarter and beginning of the fourth to take its only lead of the second half at 38-37 on a three-point shot from Tyler DeMeritt. But the Saints scored the next six and 14 of the last 16 to win going away.

Rota turned the ball over 27 times to Aviano’s 19.

“It was the first time we’ve seen a full-court press like that this season,” Anderson said.

The Admirals also finished with eight three-point field goals to only six of the two-point variety and didn’t make a free throw.

“We did not attack their zone well,” Anderson said.

The Saints’ other returning senior starter, Gabe Fabbro, was out with an ankle injury. The Admirals don’t have any returning starters, having lost all but two players from last year’s unbeaten squad that won the Division II title in Vicenza. 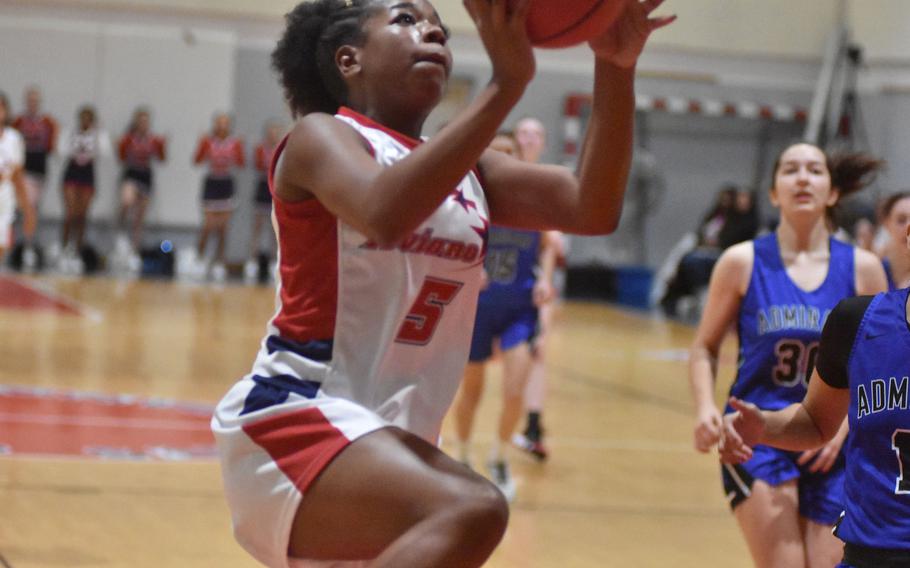 Aviano’s Kayleigh Mitchell goes up for a layup on Friday, Dec. 9, 2022, in the Saints’ 30-16 win over the Rota Admirals in Aviano, Italy. (Kent Harris/Stars and Stripes) 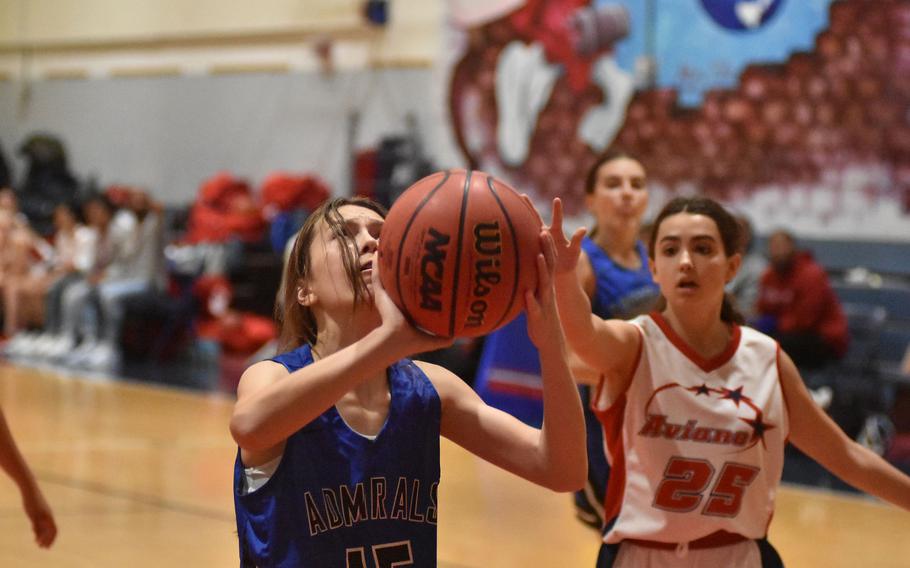 Rota's Jourdan Timmons puts up a shot before Aviano's Clara Young can get to her in the Saints' 30-16 victory over the Admirals on Friday, Dec. 9, 2022 in Aviano, Italy. (Kent Harris/Stars and Stripes) 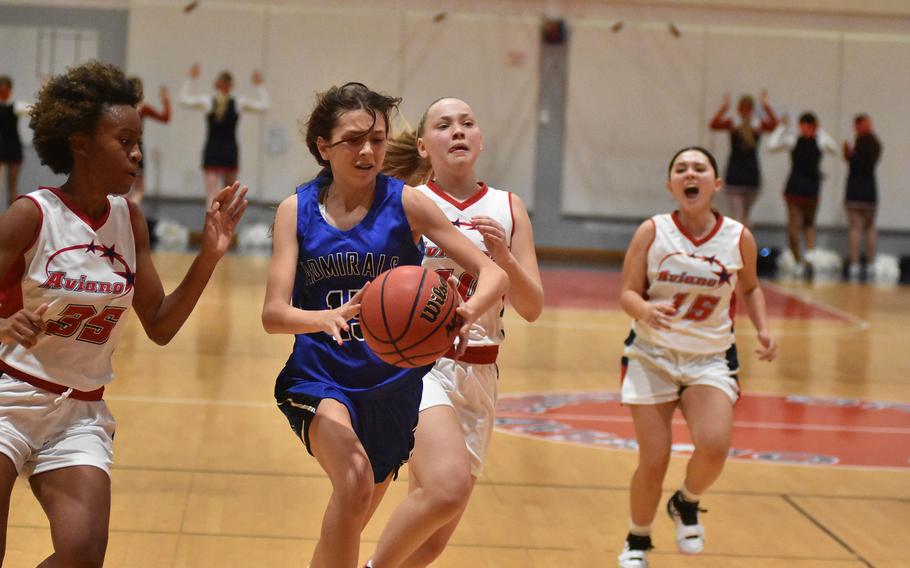 DeMeritt said he saw improvement on the court, despite his team’s first loss in three games. Rota swept the American Overseas School of Rome last weekend despite committing more than 100 turnovers in the two games. Friday, the Admirals were somewhere in the 30s.

Aviano wasn’t that far behind in the turnover department, so neither team got much of a chance to run their set offenses. When they did, though, the only player who scored was Aviano center Alayna Williams, who tallied all 12 of her game-high points right next to the basket.

Other than that, the two teams scored almost all their points on fast breaks after turnovers.

“We’ve still got a lot to clean up,” Aviano coach Enid Derricott said. “But you’d be surprised at how much the girls who are motivated can learn just in a few weeks. It’s going to be an interesting season. Very interesting.”

The four teams square off again on Saturday before joining most of their DODEA-Europe counterparts in taking off the following three weekends.