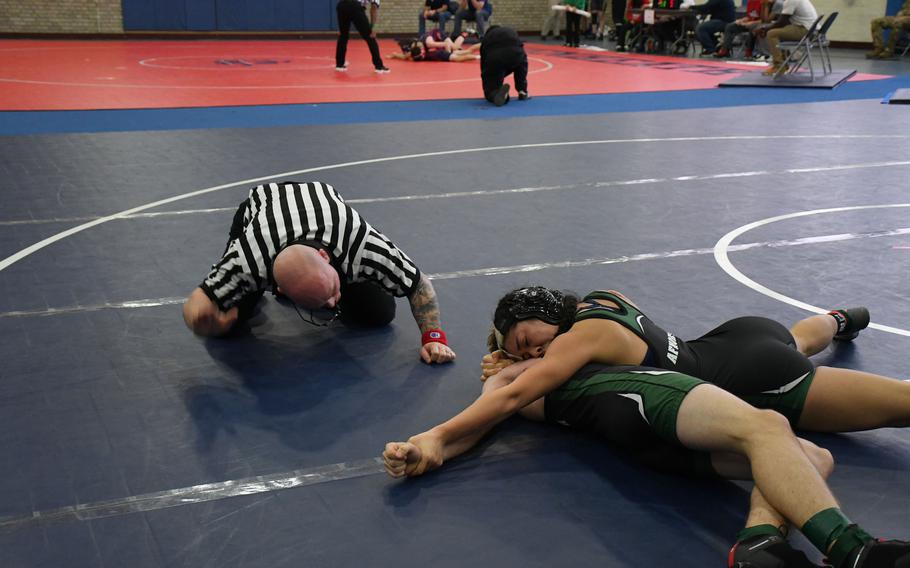 The referee goes to signal that AFNORTH's Rachele Reyes has pinned her opponent at 120 pounds Saturday, Dec. 3, 2022 at RAF Lakenheath, England (Kyle Alvarez/Stars and Stripes)

RAF LAKENHEATH, England – Some of the next DODEA-Europe champions could have been on the mat Saturday at the home of the 48th Fighter Wing. But at this point of the season, it was pretty hard to tell.

“The competition was stiff,” Lancers coach Jacob Bowman said. “There wasn’t a whole lot of people that stood out as the top dog, honestly. Everyone was into every match.”

Some wrestlers missed the season-opening meet due to SAT testing. And two teams scheduled to participate – Baumholder and Spangdahlem – didn’t compete. But there were some from the schools that did participate – Alconbury, AFNORTH, Brussels and SHAPE as well as the hosts - that went through their first official matches of the season unbeaten. 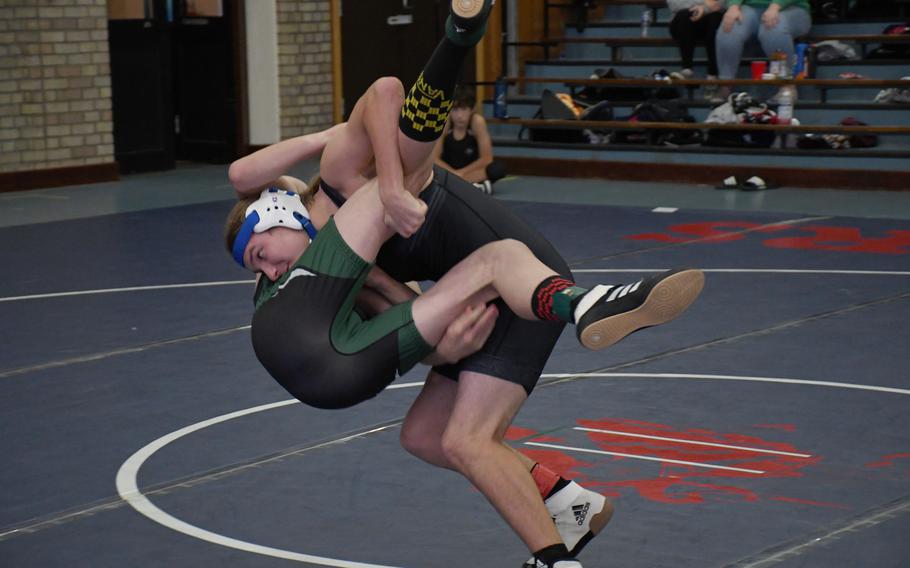 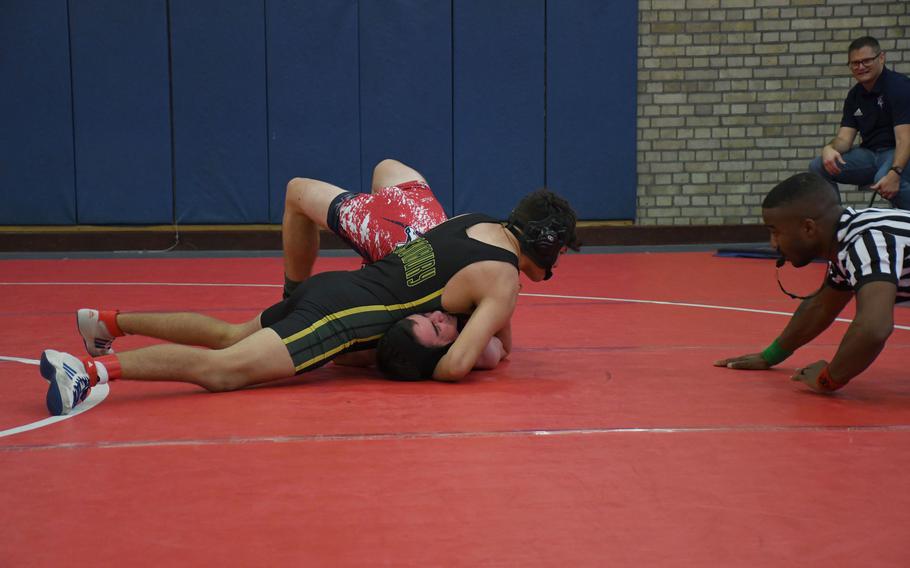 Alconbury's Mateo Moore puts his opponent in an awkward position before being awarded a pin at 150 pounds Saturday, Dec. 3, 2022 at RAF Lakenheath, England. (Kyle Alvarez/Stars and Stripes) 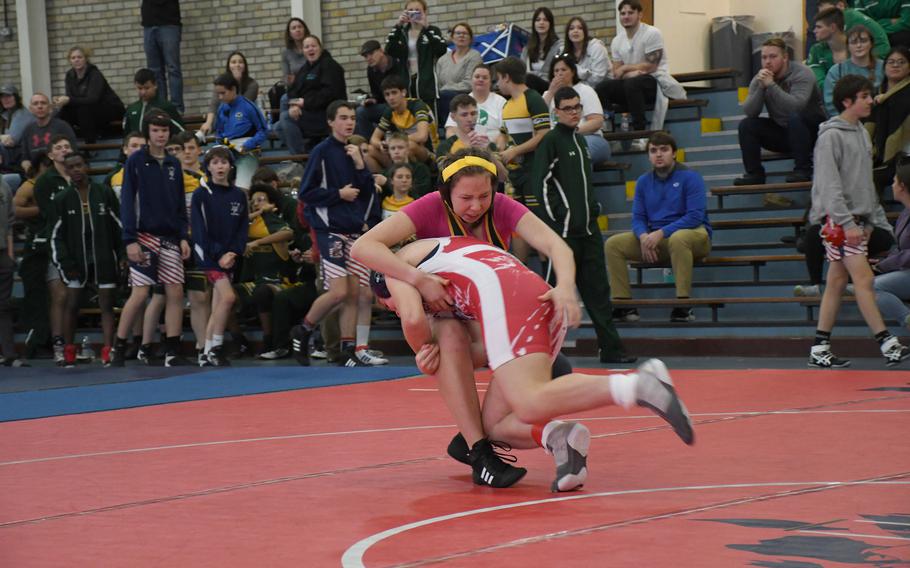 Lakenheath's Sophia Yorko drives into her opponent for a takedown Saturday, Dec. 3, 2022 at RAF Lakenheath, England. (Kyle Alvarez/Stars and Stripes) 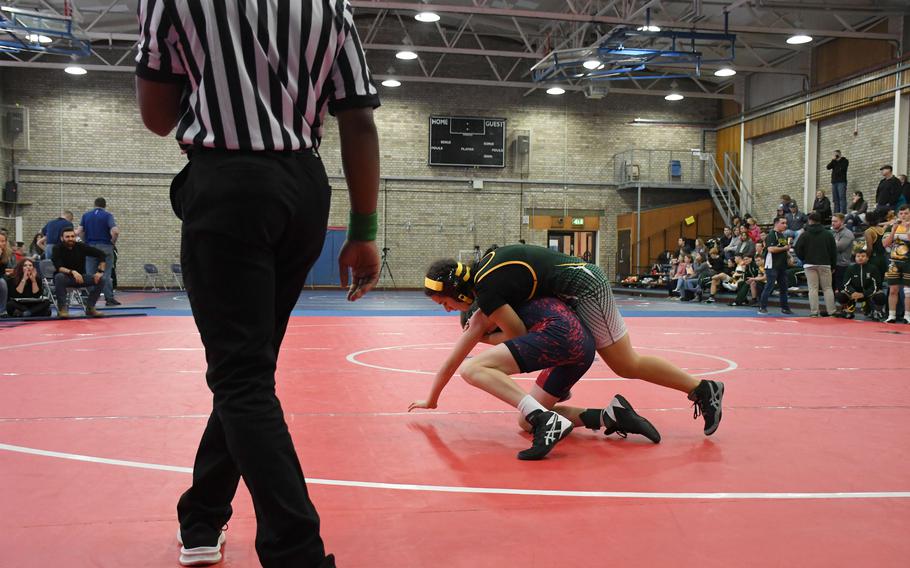 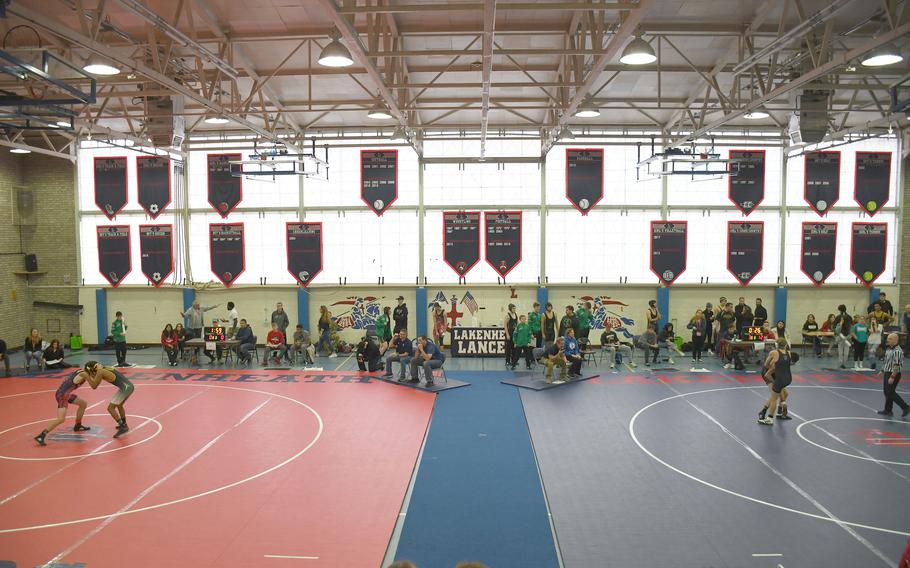 “I was impressed by some of these young athletes,” Spartans coach Jami Barden said. “I haven’t seen a lot of these kids before, but it was neat to see all of the aggression and competitiveness. None of our kids flat out dominated anyone, every match was hard fought.”

Even though the competition was fierce, that intensity stayed on the mats and the overall energy from visiting schools, athletes and families was jovial and full of positive energy.

“Frankly, we could not be more pleased with how everything went,” AFNORTH coach Dale Smith said. “Not only did we get our kids on the mat and some experience but also some great sportsmanship. Quite frankly, the sportsmanship from all the teams has just been incredible.”