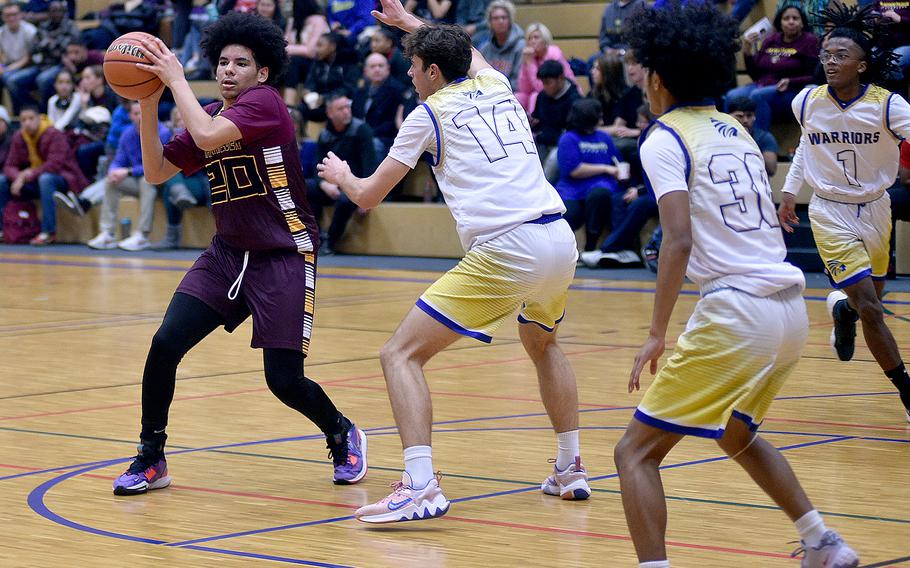 WIESBADEN, Germany – Normally being described as a villain has a negative connotation.

But when Wiesbaden boys basketball coach David Brown told girls coach Kristin Kachmar about her guards, he meant it as a compliment. They’re steal-producing machines.

“Coach Brown said to me today, ‘You got that villain in the backcourt,’” Kachmar said. “Between Mckinley (Viers) and Brandi (Stanford), we got two villains in the backcourt that people have to look out for.”

The backcourt proved vital for both squads as they opened the season Friday evening against Baumholder. The girls enacted the mercy rule at halftime, 43-0, and the boys led from start to finish to defeat the Buccaneers 51-26.

The girls team forced Baumholder into 27 turnovers over two quarters, snatching 17 steals in the process. The boys, meanwhile, got the Buccaneers to commit 20 turnovers, 17 of them via steals.

“That’s kind of our DNA,” Brown said. “It’s what we work on most often, it’s the thing we can control. Making sure there’s always ball pressure is one of our staples of Wiesbaden Warriors basketball.” Baumholder's Krisida Joy Fejeran, with ball, is bodied up by Wiesbaden's Mckinley Viers during Friday evening's game at Wiesbaden High School in Wiesbaden, Germany. Also in the photo are, from left, Buccaneers Adrianna Lopez and Alondra Aguillen, and Warrior Gren Icanberry. (Matt Wagner/Stars and Stripes) 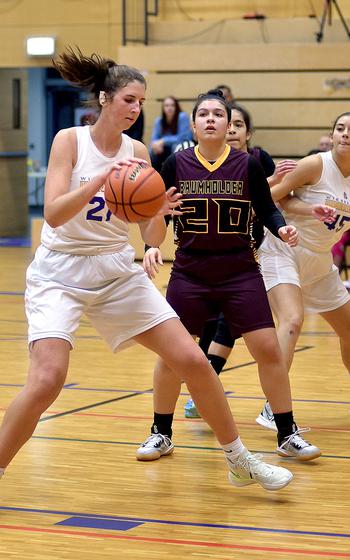 For the girls, it didn’t matter if the Warriors were trapping or not, if they were defending full court or half court – they harassed the Buccaneers into throwing the ball into dangerous areas or picked their pockets.

Wiesbaden used defense to create offense. The Warriors scored 10 of their 31 points in the first quarter that way.

“Every single time in practice when we’re running a shell defense or some sort of (other) defense, (coach) is like, ‘Jump to the ball, jump inside the passing lanes,’” said the senior Viers, who, after averaging six per game last season, posted nine in two quarters. “That is how we’re going to get all of our turnovers and steals. That definitely is something our team will have major stats on.”

Not that the guards had all the fun.

Post player Lyndsey Urick amassed 24 points and five offensive boards. The 6-foot-5 senior didn’t need help to create opportunities to score near the basket. Still, Urick ran the floor as well, going the distance for a basket on her lone steal midway through the first quarter.

She also scored four putback buckets, three of which came during a stretch in which she scored eight straight points for the Warriors late in the second quarter.

Urick hadn’t played basketball since her freshman year, as COVID-19 washed out one year and she missed all but seconds of last season due to an injury.

“It makes me really motivated to try my best and prove myself,” Urick said. 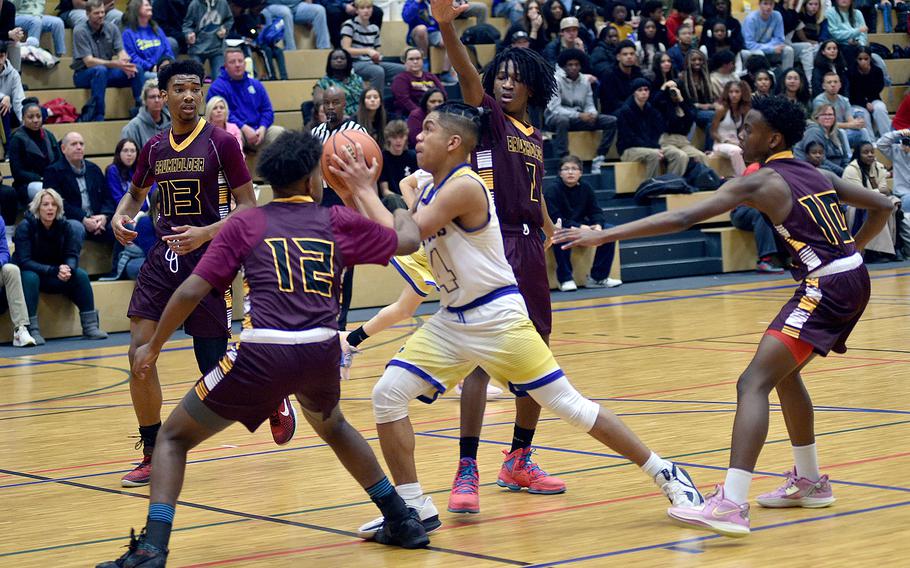 Wiesbaden's Gavin DeLuca is congratulated as he returns to the bench during the Warriors' 51-26 win over Baumholder on Friday at Wiesbaden High School in Wiesbaden, Germany. (Matt Wagner/Stars and Stripes)

On the boys side, Jordan Thibodeaux spearheaded the Warriors’ stifling defense.

The 5-8 sophomore guard from Columbus, Ga., nabbed seven of his eight steals in the second half. And in the second quarter, he and the Warriors came 30 seconds short of holding Baumholder scoreless in a frame, as the Buccaneers’ Caleb Piggé, who totaled 17 points, drove the lane to keep them from being shut out.

“We had them under our goal,” said Thibodeaux, who scored a team-high 15 points. “Our goal was only nine points a quarter. We had them at two, so we took care of business.”

The Buccaneers went 10-of-43 from the field. They didn’t start off so cold, shooting 50 percent in the first quarter.

But the Wiesbaden defense contested most shots, not giving the Buccaneers open looks. Brown credited senior Collin Koschnik, a 6-4 senior who hadn’t played for the program before, as a major reason for the Buccaneers’ shooting woes.

“That was a pleasant surprise,” Brown said. “Collin Koschnik was fantastic. … He was a huge surprise. I had no idea he would have that type of an impact defensively.”

It didn’t help Baumholder that the team was short-handed.

The Buccaneers were without three starters. Two of them didn’t meet the DODEA 10-practice rule, while another is recovering from a minor surgery. This caused coach Dewayne Piggé to turn to youth in their steads.

“I think it’s just more first-game jitters,” Piggé said. “I believe as these kids get better, understand the game, organize better, I think our turnovers will lessen.”

As for the Baumholder girls, coach Phillip Loyd anticipated growing pains for a squad that is inexperienced not only in basketball, but sports in general.

He said the Buccaneers will use Friday’s opener as a learning tool.

“This is jumping into the pool, a 10-foot-deep pool, panicking about whether or not they’re going to drown, and then remembering that we can swim,” Loyd said. “What we need to do in the weeks coming up is remember that we can swim so the next time we drop in the pool, we bounce back up and we swim.”