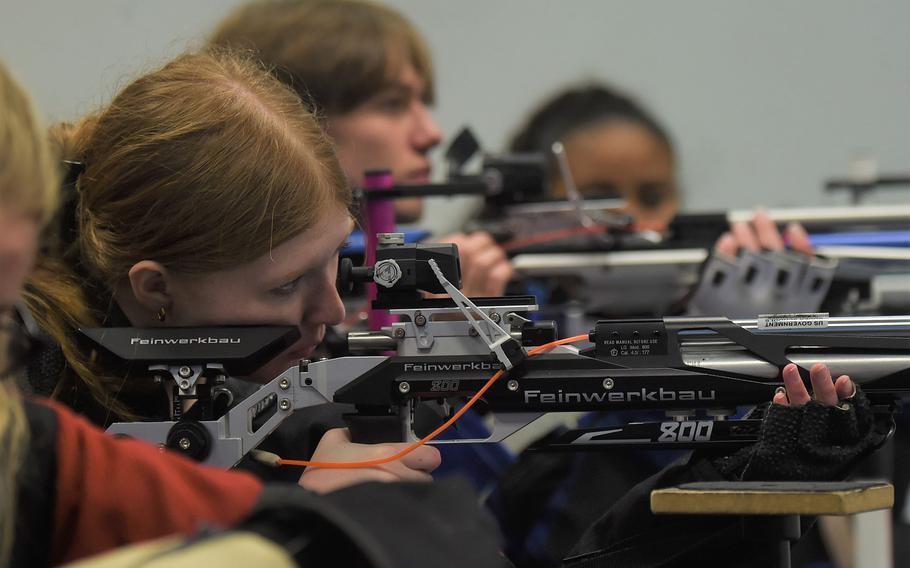 Shooters sight in during their prep time for the kneeling event of the marksmanship competition at the JROTC air rifle range inside Vilseck High School, Vilseck, Germany, on Saturday, Dec. 3, 2022. (Michael Slavin/Stars and Stripes)

VILSECK, Germany ⎯ Unlike most DODEA-Europe sports, it’s not usually that easy to take a precision air rifle to practice at home or with some friends during the off season.

So there was more than a little rust on display at the first marksmanship competition of the season Saturday. That was evident in particular for the nine-time defending champions from Stuttgart, who suffered a rare team defeat.

Even without a shooter in the top two finishers, Ansbach managed to pull out the team victory with a combined score of 1,131. Stuttgart ended up coming in second, with captain Leila Ybarra tied for the best score of the day with a 286.

“Personally, I don’t think I shot my best,” Stuttgart’s Nole Smith said. “Today wasn’t the best representation of myself but I am very confident in my team overall.”

Smith, who ended up shooting a 275, said the team is still getting used to a change in styles after the departure of longtime coach Raul Pinon during the off season. But Smith and the Panthers hope to shake off nerves going forward and improve on initial standing scores.

Vilseck’s Adelena Alvarez defended her home turf with the other top scorer for the day. She had 12 true bullseyes. Vilseck took third, with Falcons teammates Robert Demeo and Emily Dahle both finishing the day with scores of 274.

The rust appeared to fall off Vicenza’s Grace Harkison during her trip over the Alps. Vicenza’s team captain managed to put up a personal best of 266 on the day.

“Today’s event was a lot of fun. It was the first time we have been able to shoot at a different school in the past two years,” Harkison said. “Our team did really well; our goal was to break 1,000.”

The Cougars finished with 1,037 and Harkison said that was worth the long drive and that the team was going home happy and with high hopes for the rest of the season.

Hohenfels ended the day in fifth place with a final score of 707, led by the team’s top shooter Grace Otto with a 255.