A slew of new champs will be crowned on the mats 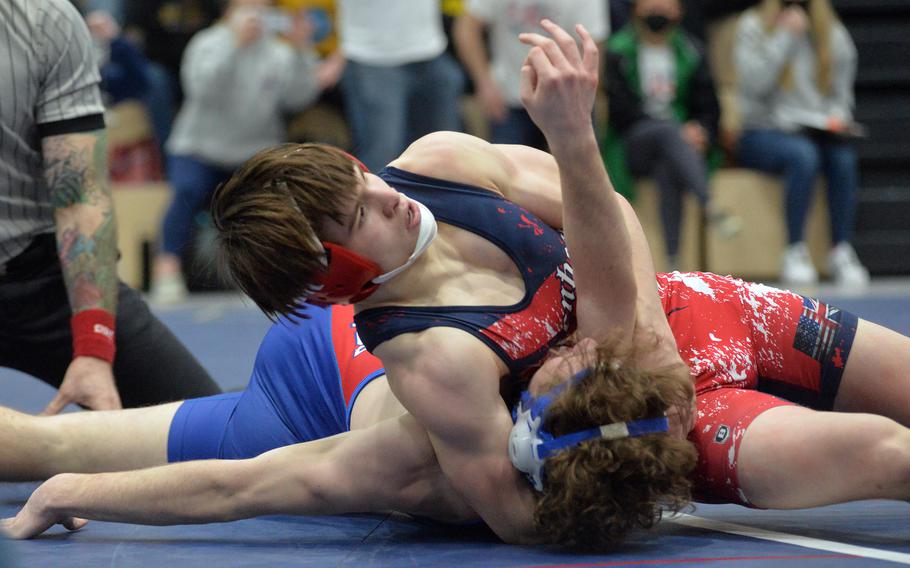 Lakenheath’s Gavin Idleman puts the pressure on Ramstein’s Matthew Abel on his way to taking the 157-pound title at the high school 2022 Wrestling Tournament in Ramstein, Germany, Feb. 12, 2022. (Michael Abrams/Stars and Stripes)

One season after splitting championships in two locations, DODEA-Europe wrestlers are ready to grapple for supremacy at one spot again.

Six weeks of regular season action will lead into sectional tournaments on Feb. 4, with the top wrestlers at Spangdahlem, Ramstein and Aviano advancing to the European meet at Wiesbaden on Feb. 10-11.

With few individual champions coming back to defend their crowns, competition will be stiff to take the top spots in every weight class.

Here is a look at each team that responded to inquiries from Stars and Stripes:

The Lions return nine athletes from last season, including a number who qualified the European championships.

The Saints might not have a ton of experience heading into the 2022-2023 campaign, but they make up for that with the largest team in several years, according to coach Rachel Schaul.

Aviano has 28 athletes on its roster, and they are spread across all weight classes and grades.

Just five are returners, however. The Saints boast the reigning European South champion in the 150-pound weight class with Javen Sherrod, who went 10-4 last season. Jevan Smith, who finished second in that same class, also comes back. Also returning are third-place finishers Cristiano Peterson and Joshua Barthold (15-4) in the 132- and 138-pound weight classes, respectively.

Paige Rogers rounds out the returners for Aviano.

The Brigands enter the season with numerous first-year wrestlers, with three freshmen and three sophomores joining.

Brussels also has three seniors returning for their last season. William Pierce finished second at the European tournament at 175 pounds as a junior, while Ezra De Leon and Nyah Jorgensen will help lead the young squad.

Still, it will be a different team from the 2021-2022 season, when the Brigands only had six athletes competing. They will have 10 this year.

The Raiders hope a mixture of a strong senior core with an overall young squad will lead to success.

Kaiserslautern gained a pair of transfers. The first is senior Ethan Bell, who makes his comeback to Europe after being in the States. Bell placed sixth in the European championships as a freshman. Also transferring in is sophomore Uno Tate, who arrives from Alaska.

Senior Gavin Idleman has a repeat on his mind when he wrestles this season, as he took home the 157-pound weight class title his junior year.

He’s not the only Lancer looking to make noise at the European tournament. In fact, coach Sharon Goodman said all six returners and two transfers have their sights set on high finishes.

Those nine also will bring the leadership to a roster that has 14 new underclassmen.

The Royals have returners in every weight class, and several placed high at the European championships.

One of those is Jesus Olivares, who finished third last season at 106 pounds. He will compete at 113 or 120 pounds. Jayden Andrews also will wrestle at higher weight classes than last season, competing at 126 or 132 pounds after finishing second in the 120-pound class.

Haden Basham will grapple at 144 or 150 pounds after taking runner-up honors at 144 last season. Evan Brooks will move up to 215 pounds and the heavyweight class after taking second at 190 in the postseason tournament.

Coach Duke Allen also pointed out Joshua Conway, a transfer from Nebraska, as one to make an impact at the 126- or 132-pound weight classes.

The Admirals expect 2022-2023 to be a developmental campaign, as they had an exodus of wrestlers following last season.

The lone returner for Rota is Ethan Gamez, who went 36-12 last season. Joining the team this season are senior Emerson Gray and freshmen Ian Fleming and Daniel Guido.

Coach Luke Spencer pointed to the hard-working nature of the Admirals as a reason for the optimism this year.

Coach Jami Barden can’t complain about the size of the roster this year, considering more Spartans have joined the squad.

Barden said between the numbers and the knowledge and experience of the volunteer coaches, the Spartans anticipate having a great season.

With perhaps the largest roster in Europe, the Panthers will try to balance both the present and future this season.

Nineteen returners are on the squad of 42 grapplers. Among those returners are junior Brayden Aperauch, who after taking home the 106-pound European crown last season will compete at 113 pounds, and junior Hayden Kniss, who took second in the heavyweight class.

Coaches Matthew Fischer and Fred King both expect Stuttgart to maintain their status as one of Europe’s top programs.

The Falcons return several European tournament qualifiers from 2021-2022, including a few who made the podium.

And they are hoping more follow suit this season.