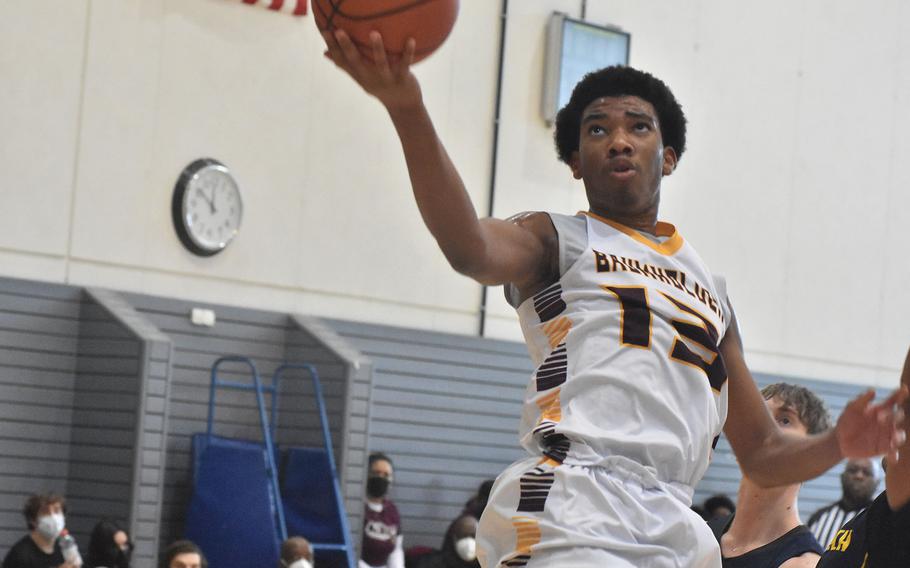 Baumholder junior Caleb Piggé, after a summer of playing basketball in the States, returns to lead the Buccaneers after helping his team win another Division III title a year ago at Ramstein Air Base, Germany. (Kent Harris/Stars and Stripes)

While the weather outside begins to cool off, the heat is picking up in gymnasiums across DODEA schools in Europe, as the 2022-2023 boys basketball season begins this weekend.

Plenty of storylines persist. After defeating their archrival in the Division I final, the Ramstein Royals will seek a repeat.

In Division II, the Rota Admirals return after going unbeaten to bring home the trophy in 2021-2022. And in Division III, the Baumholder Buccaneers are seeking to continue their dynasty – and stranglehold – on the small schools in Europe.

Below are capsules of each team that responded to inquiries from Stars and Stripes.

The Royals took care of archrival Kaiserslautern in the Division I title game last season in their first year under coach Brendan Rouse, and they will be looking to repeat with seven players returning for the 2022-2023 campaign.

The Panthers had a disappointing end to their 2021-2022 campaign, finishing fifth in the DODEA tournament after an 11-4 regular season.

Stuttgart will hope this season will go more like the regular season, as it expects tough challenges in DODEA’s big-school division.

Starting with All-Europe selection and gridiron stud Trenton Jackson, the Panthers have 12 points per game back. Sophomore point guard Tyler Jackson led the team in assists as a freshman and averaged eight points, while junior guards Ismael Anglada-Paz, Jacob Schudel and Ryan Stevenson and guard/forward Darryl Drake add to the returning experience.

Adding to that core group are additions Samson Tryon and Thomas Tsoulos. Second-year coach David Whetzel is banking on those two to bring a presence in the low block on both offense and defense.

The Falcons will bank on their seasoned guard play to carry the team that finished fourth last year as they develop their younger, inexperienced post players.

The Falcons are hoping to see an impact out of a group of six newcomers to stay competitive in the league.

Nine-year coach David Brown calls the Warriors hard workers and teachable. They will need to be the latter this season due to inexperience.

Brown admitted the Warriors will have their work cut out for them, but he said the team expects to compete with the best in Europe.

Keith Adams takes the helm for his first season as head coach after eight seasons as an assistant, assuming command over a program that went 4-12 and finished last in the DODEA South tournament last season.

The Saints could face some more growing pains this year with a young squad, but they won’t let keep them down. In fact, Aviano has set its sights on a top-four position by season’s end.

Senior Gabe Fabbro led the team in scoring last season, and he will be flanked fellow senior returners in Aidan Haas and Paul Ablang. The other three returners are sophomores – Joseph Guerrero, Deon Walker and Patrick Romanazzi.

Of the newcomers, only three are upperclassmen, including senior Arion Johnson, while four freshmen could push into the mix.

The Falcons played a limited season in 2021-2022, not competing in the postseason and going 1-5 in DODEA games.

This season, though, Black Forest Academy will participate in the postseason with Division II teams, and second-year coach Jeff Cyr said the team is grateful to be able to do so.

The Falcons enter the season with very little experience. Five players from last year’s squad graduated, while BFA added just one varsity player through a transfer. So, Cyr and Co. are moving up JV players to fill in the varsity team.

The Admirals are coming off an undefeated season and a Division II European crown in the 2021-2022 season.

They may be hard pressed to repeat those feats this season, as the Admirals return just three players – juniors Tyler Demeritt, Anthony Ross and Brian Leiba. The trio didn’t get much playing time last year.

Anderson said focusing on defense and playing as a team will be key for the Admirals.

The Cougars enter the season in rebuild mode, returning just one player from last season’s third-place squad. And that one wasn’t a starter.

Vicenza will turn to youth, as nine of this year’s 14 newcomers are freshmen.

Kristin and Derek Kujat take over the program this season, with help from assistants Ron Macauley and Dominic Paquin.

The Lions bring back just three players – all-European tournament selection Ronnie Macauley, Nathan Goldsmith and Ricky Saldana. They also expect to get a boost from Connor Luminarias, a transfer from SHAPE.

Outside of that, AFNORTH will turn to a roster full of young and inexperienced players, hoping to build off a 2-4 performance at last season’s European championships.

The Cougars are used to success under coach Shannon Daniels.

During his five seasons in charge, Ansbach has gone 65-12, including going 14-2 and earning a runner-up finish III last season.

Ansbach might struggle to replicate those successes during what Daniels is calling a rebuilding year. The Cougars have just two returners in Yannic Miranda and Benjamin Schuck, while most of the others are new to the sport.

Daniels said junior Nolan Bokor and Daveon Browne are looking like varsity starters during practice, while six freshmen will compete for playing time.

The four-time defending Division III champion isn’t looking just at this year, but also the next as Baumholder continues its dominance.

Coach Dewayne Piggé will count on those six to help bring along a class of five new underclassmen, including 6-foot-7 freshman center Damian Jung.

The Tigers will seek to build off a fourth-place performance last season, but it will have to come with a new bunch on the court.

Hohenfels has two returners for the 2022-2023 campaign in Scott Johnson and Joseph Moody. Two transfers and several freshmen will compromise the rest of the roster.

Despite the inexperience, second-year coach Shannon Filonczuk is confident the Tigers can carry on the momentum from the previous year’s squad.

The Jaguars are coming off a 2-7 season and a fifth-place performance at last year’s European South tournament, full of Division II squads.

This season, Sigonella will return to Division III, and it will hope four returners and newcomers will give the team a chance to improve upon its 2021-2022 performance.

Pacing the Jaguars will be senior guards Alessandro Montero, who led the team in scoring last season, and Andrew Andreason. They are joined by senior Teven McCarthy and junior Deshawn Wallace.

The Sentinels showed promise last season by finishing third in the European tournament.

Six juniors from that squad give Spangdahlem a strong foundation for this campaign, starting with top scorer Robert Leggett and top facilitator Javian Rivera. Coach Matthew Cirillo anticipates a breakout year for Makario Drummond, while Sebastian Collins is coming back from an injury. Casey Supinger and Aiden Penrod round out the junior group.

Senior Ethan Bodily joins the team, as do two sophomores and five freshmen.