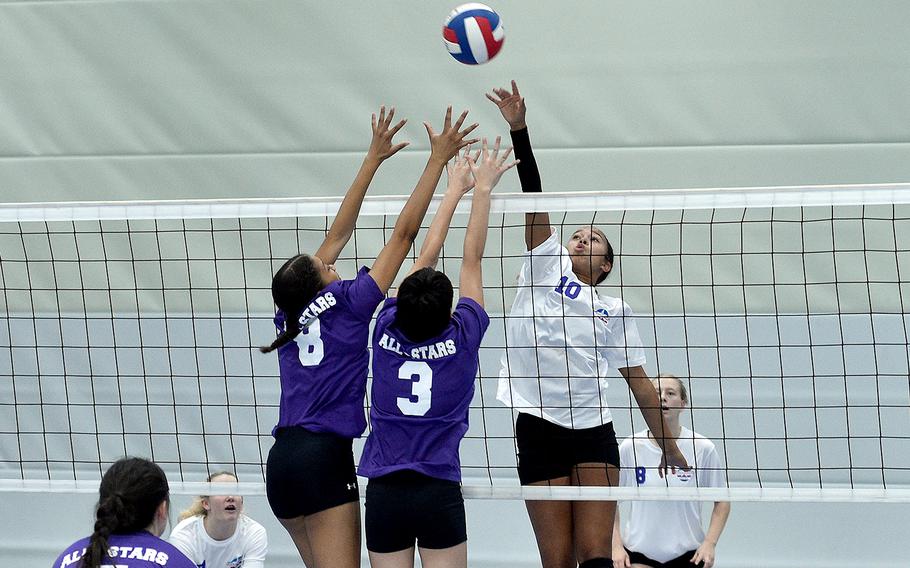 RAMSTEIN AIR BASE – Vilseck coach Brian Swenty pulled Madison Bell aside two practices before the DODEA European volleyball championships to give her some news.

Bell, who returned to Europe for her junior season after being overseas from first through third grade, had been selected to participate in the volleyball all-star matches she told her.

The 5-foot-8 outside hitter admitted she hadn’t heard of the game prior to that moment, but following the first of two matches Saturday at Ramstein High School, the importance was apparent to her. 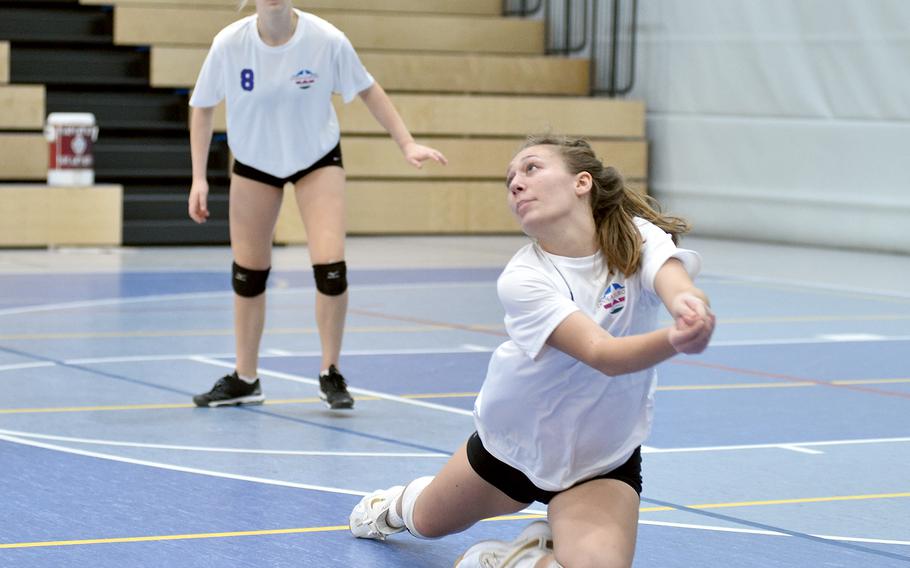 Bell wasn’t the only one of the 20 athletes who hadn’t heard of the all-star game before.

Not that they could be blamed for that. Started in 2014, the last time players had gathered for the matches came in 2019, as COVID-19 restricted the last two seasons.

Swenty, one of the organizers, said the coaches across the European schools wanted to bring back the event to honor the best players.

“COVID was rough on all of us,” Swenty said. “Giving these kids the opportunity again was super important to all the coaches. This was our first normal year of playing and traveling, and we thought it was key to bring this back.” 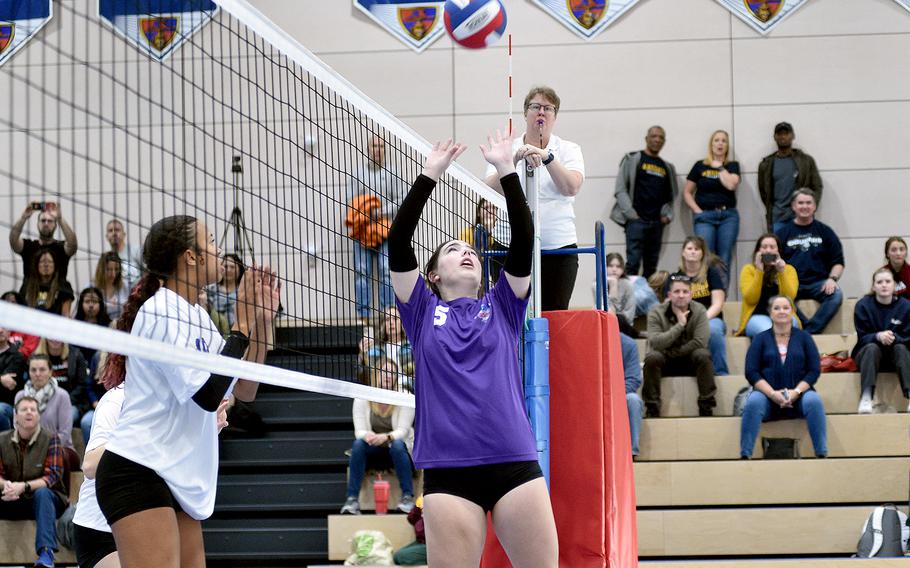 Team Purple’s Georgia Bryant, center, sets the ball on Saturday during a DODEA-Europe all-star volleyball match at Ramstein High School on Ramstein Air Base, Germany. Team White’s Sophia Fisher of Aviano, left, gets ready to defend at the net. (Matt Wagner/Stars and Stripes)

Swenty said the cream of the crop truly were in the Ramstein High School gym, which the week prior had hosted the European tournaments over three days. Of the 20, 17 played for teams that finished in the top four places in their respective divisions.

It also showed in the quality of play. Even though Team White won both matches 3-0 and 3-1, it only won two sets by double digits.

“There’s so much energy,” said Lakenheath junior Chloe Aldrich, who played for Team White. “Everyone knows what they’re doing, they know where they should be and it makes it easier to talk to people about volleyball. I would say that’s probably the most important thing: that everyone wants to be on the court and they all want to play. 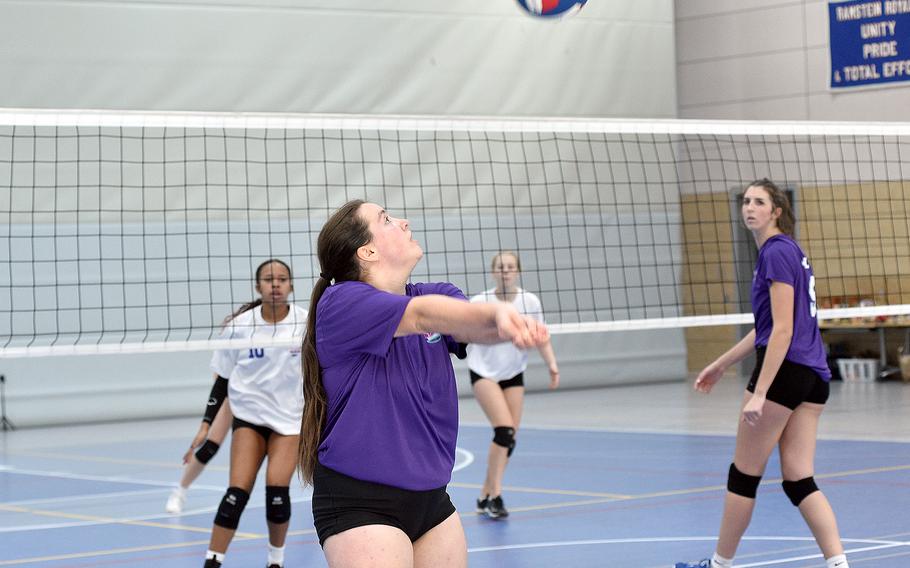 “It’s a great environment. I loved every second of it.”

Unlike most all-star games, the teams on Saturday looked to be in sync.

And they could thank having a few days to practice for that chemistry. The athletes arrived on Wednesday and ran drills on Thursday and Friday.

“Had we came in here without practicing a couple of days ahead, it would have been harder for us to have court chemistry and being able to know who’s going to get what,” Naples senior Kennedy Rascoe of Team Purple said. “We got the chance to run some plays and learn our setter, instead of just jumping into the game and try to figure out what to do with certain people.” 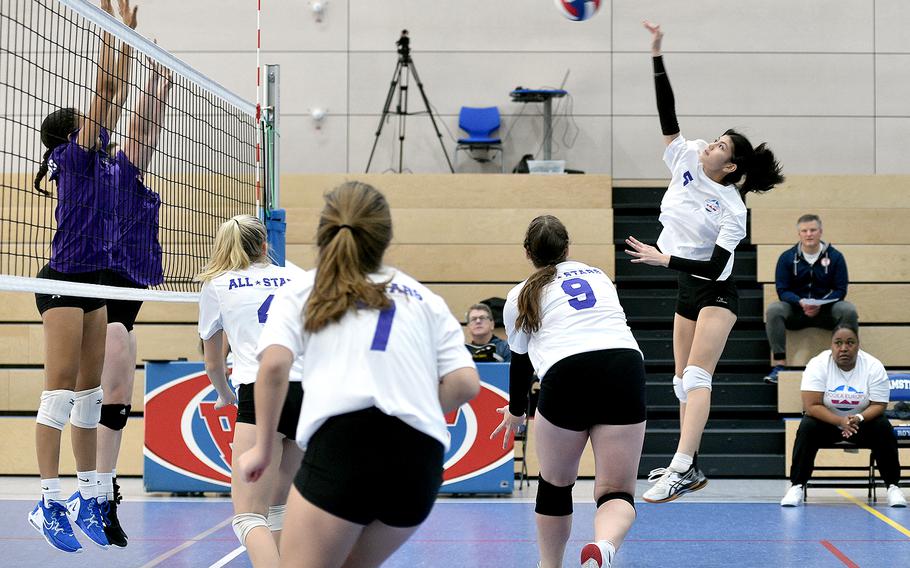 Along with the play on the court, the experience allowed the girls to get to know one another.

Rivals became teammates as Kaiserslautern and Ramstein players were placed on the same team, as were Vicenza and Naples. Also, girls from smaller schools such as Ansbach got the opportunity to play with those from the top two divisions.

“It was special, especially getting to meet my opponents that I’ve been playing for the past few years,” said senior setter Georgia Bryant, one of two Cougars in the matches. “I never got to meet them; now I got to spend time with them and call them my friends.”

For the 10 seniors, the all-star matches marked the last time they represented their schools on the volleyball court. 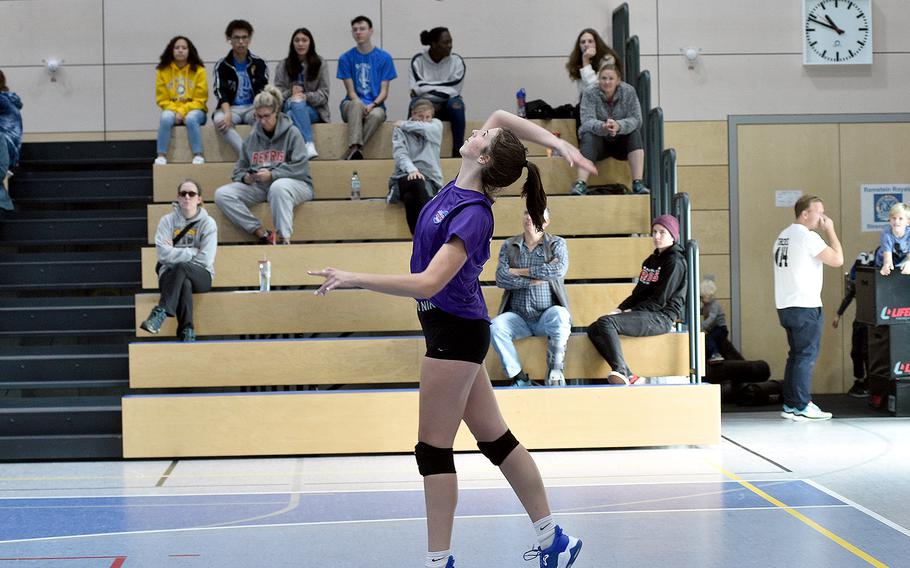 But for the other 10, like Bell, they proved to be a learning experience, as the players and coaches didn’t treat the matches as exhibitions. The junior Falcon said she can’t wait to go back to Vilseck with the knowledge she gained.

“Me coming here, I learned lot of skills I can take back to my team and my program to benefit us for seasons to come,” Bell said.

“I’m so excited for my senior season. I think we can come back next year stronger than we were last year, even despite losing our seniors and due to people moving.”