Stuttgart caps another perfect season with another title 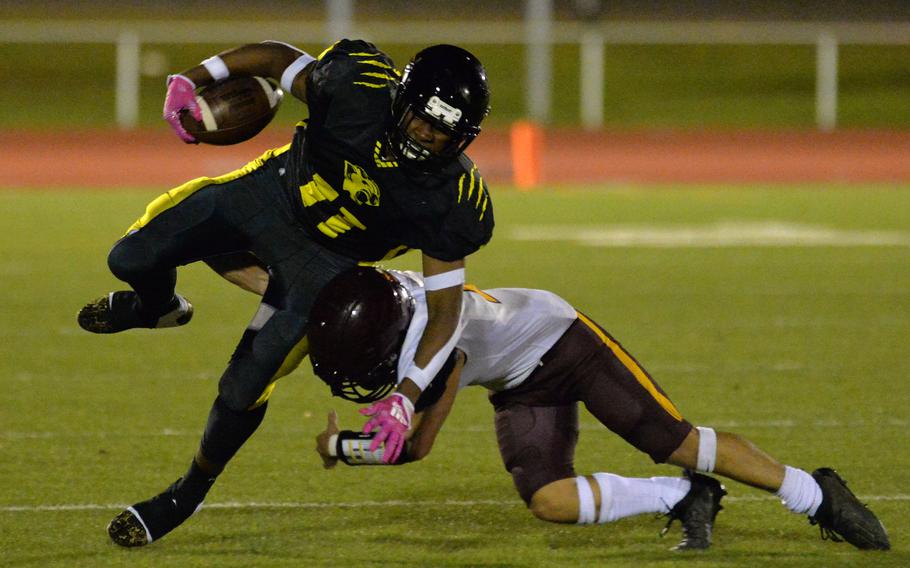 He had coached many since they were freshmen, including quarterback Caiden Ray. They had won back-to-back championships around the COVID-19-struck 2020 season. The Panthers had a chance for a three-peat; so the Stuttgart coach wanted to go out with them as winners.

Stuttgart defeated the Vilseck Falcons for the second consecutive year in the DODEA Division I European football championship at Kaiserslautern High School on Saturday, this time by a score of 51-12. The win capped off another undefeated season for the Panthers.

“It was all the motivation in the world,” Ray said of Saturday being Ratcliff’s last game as coach. “Just the fact that this was his last one, I was going to give it my all. I would have broken my leg for him. All the boys feel the same way. This one was definitely for him.”

While the score indicted a blowout, the game was anything but that.

Vilseck trailed 28-12 heading into the fourth quarter, after Tameco Richardson scored the lone points of the third period with a 3-yard touchdown, his second of the night.

At that point, though, the wheels seemed to come off. Ray opened the fourth quarter with a 15-yard scramble into the end zone to put the Panthers up 35-12, and on the next play, Stuttgart junior Gabe Tamez picked off a pass from Vilseck quarterback Jonathan Bullock. On the following play, Stuttgart running back Trenton Jackson powered ahead for an 11-yard score and Ray ran in the two-point conversion after a bad snap on the kick, putting the Panthers up 31 points with 11 minutes, 29 seconds remaining.

On the Falcons’ next possession, they started on their 41-yard line but went backwards, as a sack, a negative run on third down and fumble on fourth down gave Stuttgart the ball at the Vilseck 10.

Two plays later, wide receiver Josh Zipperer had nowhere to go on a reverse and pitched it back to Ray, who scored on a 5-yard run. Senior Deshawn Lewis converted the two-point conversion to invoke the mercy rule with 8:54 left in the game. 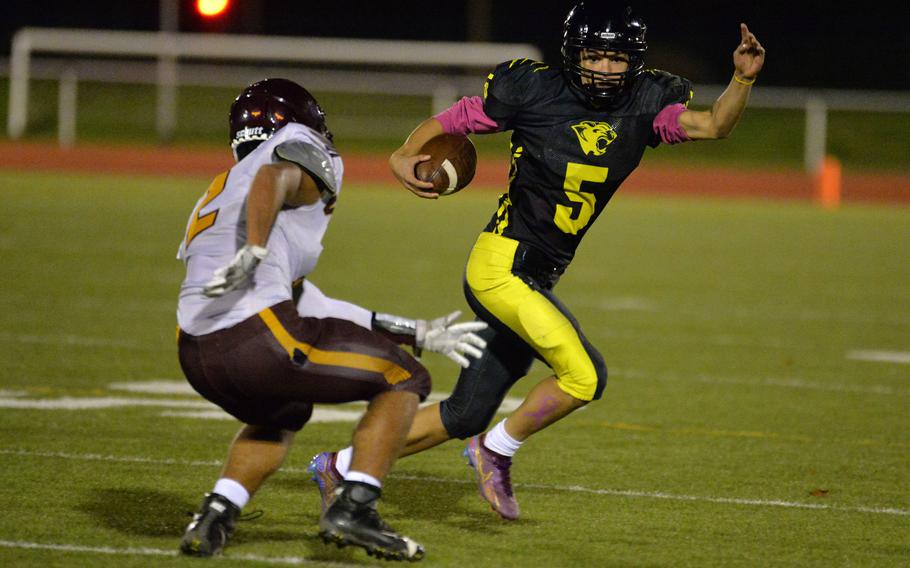 Stuttgart’s Itzak Sandoval tries to get past Vilseck’s Justin Barnes in the DODEA-Europe Division I football championship game at Kaiserslautern, Germany, Oct. 29, 2022. Stuttgart took the title with a 51-12 win. (Michael Abrams/Stars and Stripes) 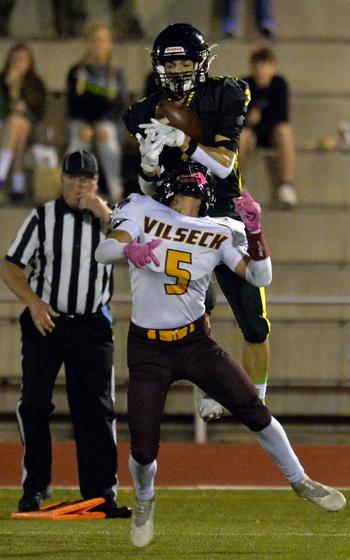 Stuttgart’s Jace Holmes pulls in a pass over Vilseck’s Junior Gonzalez in the Panthers’ 51-12 win over the Falcons in the DODEA-Europe Division I football championship game at Kaiserslautern, Germany, Oct. 29, 2022. (Michael Abrams/Stars and Stripes) 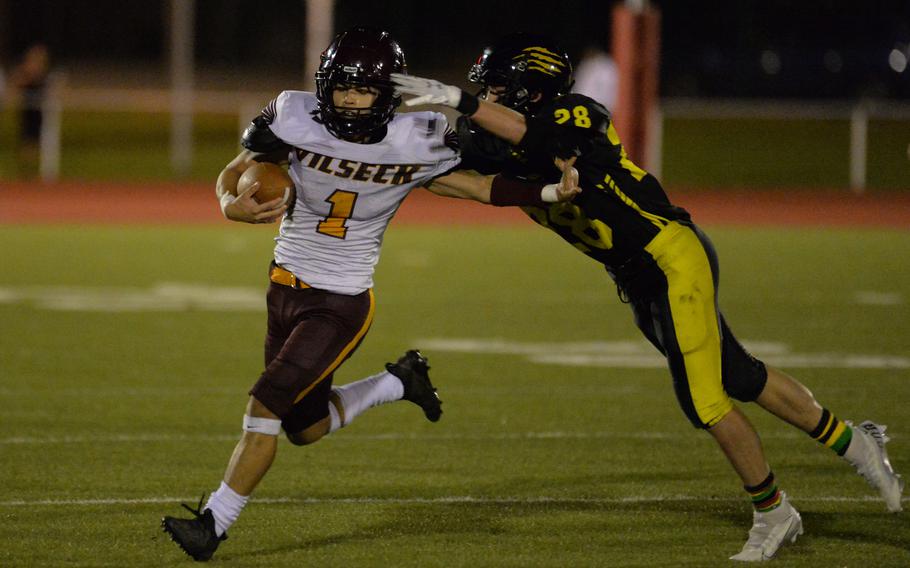 Vilseck’s Gabriel Morell tries to stay out of the grip of Stuttgart’s Levi Katzenberger in the DODEA-Europe Division I football championship game at Kaiserslautern, Germany, Oct. 29, 2022. Stuttgart won 51-12. (Michael Abrams/Stars and Stripes) 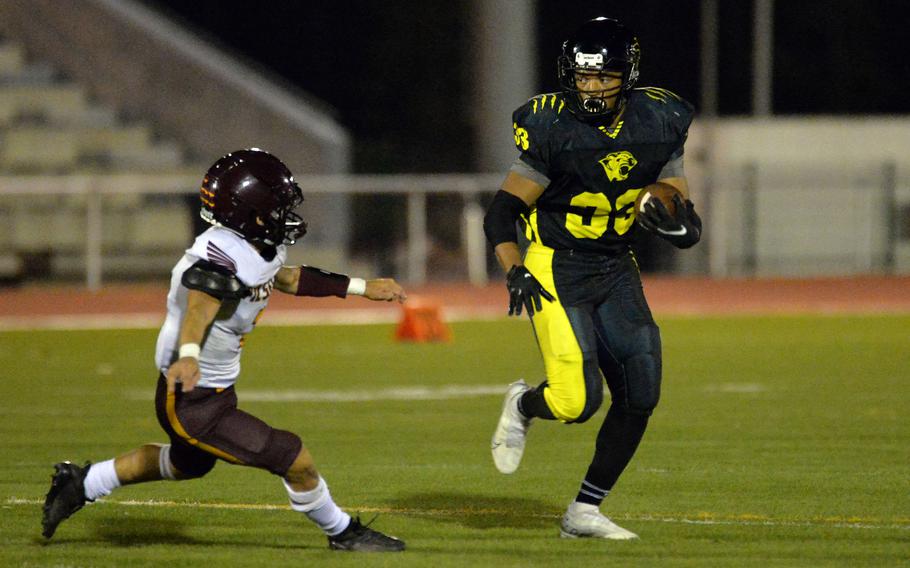 Stuttgart’s Trenton Jackson keeps his eyes of Vilseck’s Gabriel Morell as he rushes for yardage in Stuttgart’s 51-12 win over the Falcons in the DODEA-Europe Division I football championship game at Kaiserslautern, Germany, Oct. 29, 2022. (Michael Abrams/Stars and Stripes) 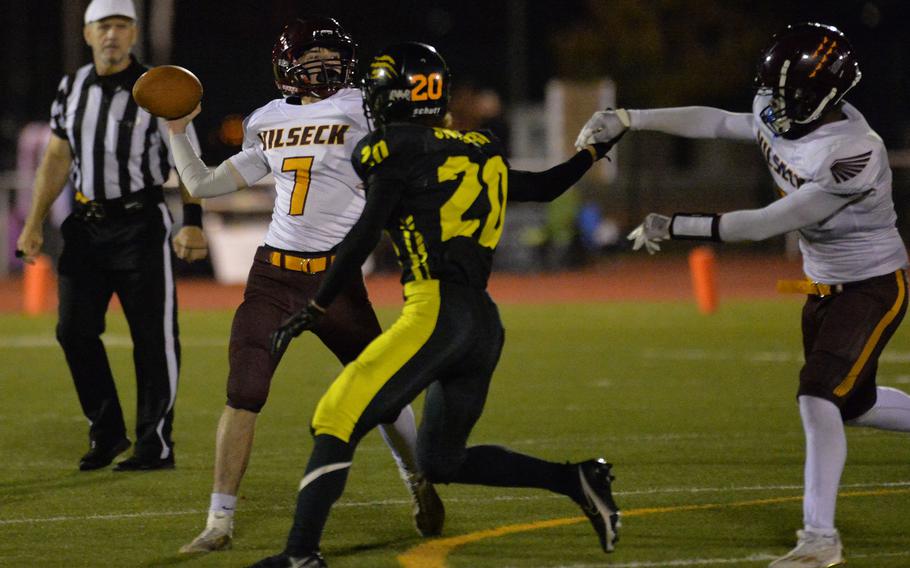 Vilseck quarterback Jonathan Bullock gets off a pass despite pressure by Stuttgart’s Marcel Mailey. Stuttgart beat Vilseck 51-12 in the DODEA-Europe Division I football championship game at Kaiserslautern, Germany, Oct. 29, 2022. (Michael Abrams/Stars and Stripes) 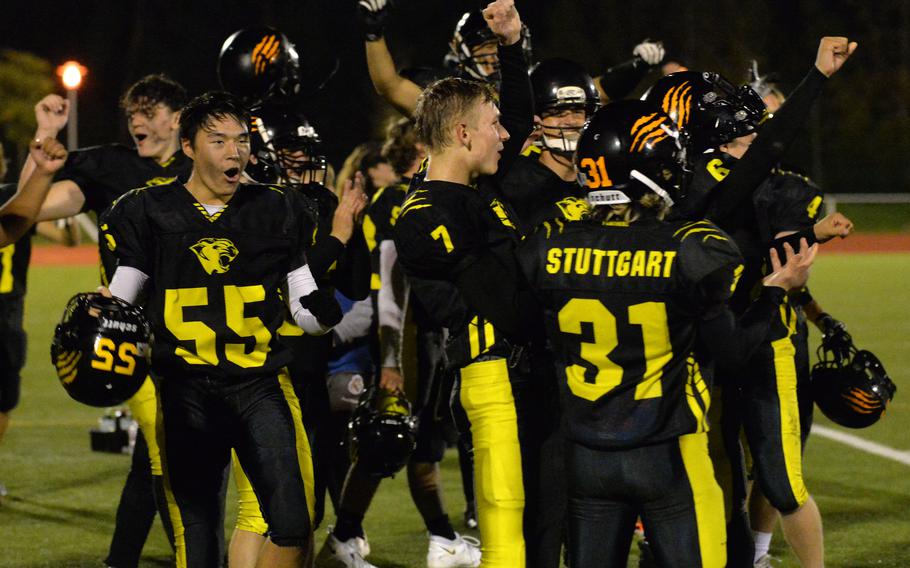 The Stuttgart Panthers celebrate their 51-12 win in the DODEA-Europe Division I football championship game at Kaiserslautern, Germany, Oct. 29, 2022. (Michael Abrams/Stars and Stripes)

“First, I have to give props to Vilseck,” Ray said. “They never gave up, and they never do. We were quiet on the sidelines and some people got nervous, but we knew what we have and we knew it was special. So, we never gave up on each other.”

The Panthers anticipated the Falcons would get tired as some point, as they had many players go both ways. Hence, Stuttgart kept pounding away on the ground.

No Panther eclipsed the 100-yard mark, but Jackson amassed 93 yards and three running scores on 12 carries, while Ray chipped in 89 yards and two scores on eight attempts. Ray and Jackson also connected on a 7-yard touchdown pass in the first half.

Overall, the Panthers totaled 230 yards on the ground with an average of 8.2 yards per attempt.

“When you’re running the ball and moving the chains, they just get tired,” Ratcliff said. “We felt by the third quarter, beginning of the fourth quarter, the dam would burst.”

In the first quarter, however, Vilseck kept itself close.

The Falcons used a 14-play drive that took 6:47 off the clock – and more importantly, kept the Stuttgart offense off the field. The drive included a fourth-down conversion at their own 28-yard line, where Richardson went for 10 yards needing only two. Richardson capped off the drive with a 3-yard score.

For the rest of the first half, however, just one drive lasted longer than a three-and-out for the Falcons. That one ended with a turnover on downs at the Stuttgart 37-yard line. The Panthers scored on the ensuing possession, giving them a 28-6 halftime advantage.

Richardson led the way for the Falcons, totaling 105 yards on 36 carries.

“We’re a ground-and-pound team,” Vilseck coach Eric Mead said. “So, we take a lot of time off the clock when we can control the ball, and we did a nice job controlling the ball in the first quarter.

“We were in (the game) for quite a while, and then we had no answer for their run gun once they started giving it to Trent Jackson.”

The Panthers’ dynasty now can boast three straight titles, but if the team wants to go for a fourth straight, it must do so without its star quarterback back and running back in Ray and Jackson, respectively.

They also will have to do so without their coach.

Ratcliff, meanwhile, will turn his attention to his musical talents, which he showcased by belting out the national anthem prior to Saturday’s championship game.

“My music is my happy place right now,” Ratcliff said.